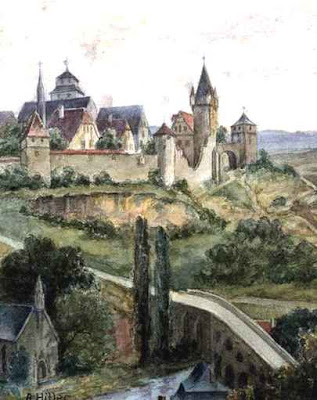 (Above: a fair average watercolor by Adolf Hitler. If you want to buy a work by the Nazi leader, expect to pay around ten thousand dollars or so, depending on size, the extremely variable and always ordinary quality, and the often suspect provenance. See here for details of an auction this year).
A very quiet day on loon pond, so it's time for a round up of a couple of disappointments by usually stalwart players.
Over at The Sydney Morning Herald, Miranda the Devine sets the standard for cunning deviousness by attacking Nathan Rees and the NSW Labor party over the state of NSW. We need Rees like a hole in the head, she shouts, and after a few crocodile tears, spends the rest of her column sinking in the boot. What's to argue?
About the only thing worth noting is that she's still peddling Frank Sartor as Rees's successor, which is even more cunning and devious, since if Sartor gets up, the Libs might do well enough to set up the prospect of a two term government - a rarity in NSW politics.
Even the reliable Christopher Pearson disappoints, as he takes on a storm in a teacup involving the impending auction of a couple of plaster busts by nineteenth century artist Benjamin Law of Truganini and her partner Woureddy.
Works of art pressed into another service, he worries, as he details Tasmanian indigenous protests over the sale, and argues against the rhetoric deployed by activists. You can get the full flavor in the Mercury under the header Anger over bust auction:
"Sotheby's is auctioning two busts of Aboriginal people who were abused while alive and held up as entertainment after death," said Tasmanian Aboriginal Centre secretary Nala Mansell, who will protest the auction in Melbourne.

"The significance of the busts is that they depict, for racists, the myth of the extermination of Aborigines in Tasmania. They are held up as trophies as the ultimate racist plot -- if physical extermination fails, kill them off through images ...
"These busts are not art. They are images of the dead associated with a racist plan to exterminate a people.

Gee, you have no idea how I hate to sound like Pearson, but the busts are art of a kind.
They might not be art you like, they might not be art you consider good, they might look like the art you'd expect from a man considered by many to be Australia's first professional sculptor, but there were up to thirty casts made, and at least eight remain in public collections around Australia and overseas, including the Melbourne museum, Melbourne University and the British Museum. Apparently the pair for sale have been on loan at the Tasmanian Museum and Art Gallery since 1983 and were shown at Canberra's National Portrait Museum this year.
Here's the curatorial response in the National Gallery, as edited from a text from Daniel Thomas and available in full here:
Law’s bust of Woureddy gives no hint of the decimation of the Tasmanians. As noted by Mary Mackay, it shows Woureddy ‘as hunter, warrior and man-in-command, a Greek hero in kangaroo skin’. 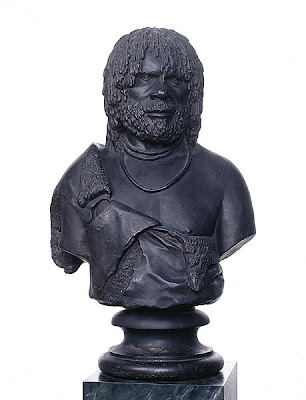 Law’s bust of Trucaninny, who saw her mother killed by a white settler and her first husband murdered by two sealers, is probably the most emotional colonial portrait of an Aboriginal person. According to one colonial account, she is ‘sorrowing, mourning the slain members of her family and race’ ...
... Benjamin Law’s busts of Woureddy and Trucaninny, two of the most celebrated Tamanian Aboriginal people of the 1830s, are the earliest major pieces of Australian sculpture. Woureddy sat for Law at the start of 1835 and, by April, his bust was ready. Trucaninny probably sat a few months later, though Law may only have completed her bust the following year.

Law’s contemporaries recognised that these busts were accomplished works of art but valued them primarily as ethnographic records.
Hmm, smells like art, looks like art, curators quack about art, might even be art ...
Apparently Law knew his subjects back in the eighteen thirties, but the rhetoric about their meaning and their fate has turned surreal.
As for the notion that the images propose that these are the last Tasmanian aborigines, surely that's an absurd statement. If physical extermination fails, kill them off in images! What on earth does that mean?
I guess Tom Haydon's documentary The Last Tasmanian will now have to be banned and removed from the indigenous section of the South Sydney library. Oh wait, in its re-release, the controversial and offensive bits were deleted, as censorship never stands still. But how on earth did the title survive the trimming?
But then the rhetoric gets cranked up even further:
"We wonder if people would likewise make money from Nazi images of attempted genocide of the Jews ...

"It is disgusting that commercial gain is placed ahead of stamping out racism, and the hurt to the feelings of Aboriginal people.

"The dead are not here to defend themselves, so we do it in honour of their memory."
Dearie me, Godwin's law broken yet again.
Well as for making money out of Nazi images of attempted genocide of the Jews, perhaps you should talk to the hand or at least to Steven Spielberg. Last time I looked Schindler's List - which mainly works because Ralph Fiennes is such a nasty Nazi - had won seven Oscars and grossed well over two hundred million world wide.
Now while you might argue that Schindler's List is not the same as buying some of the lamp shades allegedly from human skin found by soldiers from Patton's Third Army when they reached Buchenwald in 1945, neither are the sculptures by Law.
Perhaps we could settle for a compromise and think of Law's work as a sculptor as a close approximation in the trade of works by Adolf Hitler, which given his mediocrity as an artist is an eternal surprise, but also surprisingly brisk, with auction rooms constantly turning over his work.
Second thoughts, the closest parallel to this kind of Tasmanian activist thinking is that of Islamic fundamentalists seeking to control the image of Muhammad, and thereby control the past, and their history and culture.
More sensibly, historian Lyndall Ryan noted that the market for these sculptures had collapsed and it would be a good opportunity for the TMAG or some other Tasmanian institution to acquire them for a reasonable price, rather than see them sold off to a private collector for well below their value.
Bottom line? Sotheby's withdrew the two sculptures from sale. And the motivation behind the rhetoric?
... their owner, a descendant of Hobart convict turned businessman Judah Solomon, decided to keep the busts and expected to fetch up to $700,000 at the Sothebys auction.

"Sothebys decision to withdraw the busts of Woureddy and Truganini from sale gives us breathing space," Mr Mansell said in a statement.

"It won't be long before the busts are sold and lost to Aboriginal people again because we can only make a moral claim."

Mr Mansell wants Tasmania to buy the busts and set up an Aboriginal cultural centre where images and objects for continuity of culture and identity can be held.

"Not all collections about Aborigines need to be given up by institutions," he said.

"We seek items that should not be out of Aboriginal hands such as images of our dead, baskets and rock carvings.

"It is offensive to display images of the dead inappropriately (for example, for sale at a Sothebys auction)." (NIT, Sothebys defends Aboriginal stance and withdraws Tasmanian works).
Well as for moral claim, let's not conflate and confuse the notion of an artist's moral rights to his work, or copyright, with the newfangled Mansell established notion that a subject or an object can lay moral claim to a work in which they were neither the artist nor the subject, except by an extended connection of being of the same racial group.
And as for it being not offensive to display the works in a cultural centre, after purchase from Sothebys, as opposed to being offensive to display the works at Sothebys and then be bought by someone else - say the government - on behalf of the indigenous community?
With the purchase used to gear up the said culture centre?
It's only a shakedown, when all's said and done ...
Well having put up images with the potential to offend Christians and Islamics, time to round out the quadrella with images from Adolf Hitler and Benjamin Law ...
(Below: Benjamin Law's busts of Truganini and Woureddy). 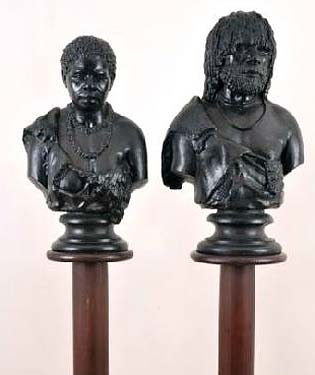