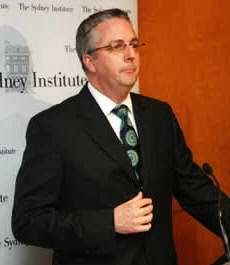 (Above: Mark Scott standing in front of a Sydney Institute sign. Hmmm).
Reading Caroline Overington today - the chores of loon pond are tedious, vexatious and troublesome - reminded me of the current fearless leader of the ABC, Mark Scott.
In Slings and arrows keep raining, Overington spends a little time on Peter Costello's column griping about the ranks of the ABC being filled with socialists - except for one man in Perth - and then equal opportunity time abusing the Australian media for the hard time offered up to Australian politicians.
But one thing spiked a memory deep in the hard drive:
Costello went on to say there is only one known conservative at the ABC, a fellow who works in Perth but actually, there might be one other. During his time at Fairfax Media, it was generally accepted that Mark Scott - then a reporter, now the bloke who runs the ABC - was a hard-right conservative.
I once asked a colleague how this was known. He looked at me and said: “He goes to church.” The whole shirt and tie thing bothered people, too.
Well not just a church but a kinda clap happy church of the sort Peter Costello would surely love (and yes I know the church, no I'm not telling). Yep the hunt for conservatives and liberal leaners within the ABC is now game on with a vengeance.
Now I don't have a problem with Mark Scott. Compared to Jonathan Shier (the Wiki stub needs help), he's a model at avoiding controversy, managing the unruly beast, and tickling up the government for money. I don't think much of the drama department or its output during his regime, but I also don't believe in pushing managerial responsibility up the line when the malfunctioning drama department can take the blame (and little credit) on its own.
There's also a fundamental misunderstanding of the ABC's demographic at work in most discussions of the organisation. It has a large rural constituency, and its city audience consists of people who hate advertising, love BBC drama and comedies, or take an interest in current affairs. It serves up classical music, and caters to a younger music demographic with that cockroach of the airwaves triple j, and even Radio National carries a country hour along with its grab bag of poetics and dialectics (and, groan, Phillip Adams).
It's a broad church, united mainly in a lack of interest in its audience in commercial broadcasters. If you were to change the programming, especially in television, by inserting more blatant propaganda of a prejudiced kind, there'd be all kinds of protests or switch offs. As it is, the current affairs area on television is carefully quarantined - to a half hour after the news, to a much later combo of news and interviews, and to Sunday morning, with Four Corners and Media Watch taking up little more than an hour on Monday.
The rest of the time you can get very conservative, suitable for cardigan wearers and librarians, entertainment of a best of British, or tree hugger, sea changer kind (usually with Richard Roxburgh, designed to make middle aged women drool, though he represents a drool proof factor to me). Why they even make a comedy about librarians. Lordy, how racy is that. A socialist comedy about socialist book workers serving the community with government purchased books so unemployed dole bludgers and working class stiffs don't have to go buy stuff.
Not good. Because you see ideologues obsessed with ideology expect people to share their desire to sit through shows designed to support their world view.
You can assess the commercial appeal of this kind of notion by looking at how many overtly right wing and ideologically obsessed programs you can find on commercial television in Australia. Zip all. Unless you think Kyle Sandilands is a libertarian devoted to Ron Paul.
Radio is a better fit, because it allows for shock jockery and demagoguery, but even here you find specialist ranters have a very specific market appeal - for which the ABC and hits and memories stations provide shelter for listeners anxious to avoid the storm.
A few ABC shows have dressed in obligatory right wing types, which is fortunate because it means I've been able to cut Sunday morning television out of my viewing habits since the likes of Andrew Bolt and Piers Akerman started to turn up and berate anyone within ear shot, compounded by Nine's death wish to remove its last quality program - Sunday - from the tube.
All things considered, I'd venture to suggest that any hard right loon who took over control of the ABC would - if insisting on a fierce balancing of the books - see audience numbers drop.
But back to Mark Scott, who's been adept at steering the ship through the kind of blather regularly delivered by the likes of Peter Costello. If you go here, you can read up on his approach to faith, as provided by the Melbourne Anglican:
At the end of the day, “common garden variety Christian” is the title he bestows on himself, a boy raised in a Christian home who grew up in the Presbyterian Church, and is now a member of an independent church in his adulthood and married to the principal of a Sydney Anglican School.

Mark, a regular churchgoer, admits he dreads critical mention of the media in sermons. He accepts however that sermon illustrations do often make a valid point: “I would say that I think the media would much rather cover religion than they would faith,” he says.
Now start to throw in a few other details. Like this from the ABC's Sunday profile, here:
A book published last year, God Under Howard, quoted a Baptist pastor as saying Mr Scott was "yet another of God's secret agents trying to bring the life and light of Jesus into one of the most hostile parts of our society, the media".

Asked if that was fair, Mr Scott said some church people who thought they had a "pretty tough time" from journalists were excited to find a Christian in a senior media role. "I am who I am, but I don't view myself as a secret agent."

Then remember that Scott once worked for a state NSW Liberal Education minister, Terry Metherell, and even thought briefly about a political career with the Liberals, but never pursued it because the factionalism put him off:
...I worked for Terry in the Greiner opposition as it then was for about fifteen months before the election. The Liberals had been out of power for a long time in New South Wales. There was a young energetic leadership team under Nick Greiner so I got a taste of politics through there and then when they won the election I was in my mid twenties and I was an advisor to Terry Metherell and I remember there was this massive protest around parliament house, 80 000 to 100 000 people protesting, the police calling in and saying, "Please keep them out of line of line of sight of the window because we can't guarantee his safety." And there was this feeling of, "Well what have we done here. You know all these people are so angry." And for someone in their mid twenties to be operating in that environment was quite intense, you grow up pretty fast, I think you have to get to be politically savvy, you learn diplomatic skills, you learn to perform under pressure and it was a terrific experience for me. I never seriously pursued developing a political career for myself, I never did the numbers or...

JULIA BAIRD: But did you court the idea?

MARK SCOTT: Look I think there were, I think it could have been said that I had some skills that could have been valuable in a political career, I could give a good speech, I could talk pretty well, got on well with people and knew my way around some policy elements but there are other part of the political life that I didn't appreciate at all. I mean I was never a factional player and the prospect of wheeling and dealing and doing deals to win a seat, to get pre-selection for a seat - you know, it just wasn't me and I think at times, I look at the cost and the brawling around, pre-selections and factions and the like and in a personal sense I'm all the more glad that I never went down that road.

JULIA BAIRD: Would it have been for the Liberal party?

MARK SCOTT: Probably, I think I'd have been a staffer for the Liberal party but I'd even say to you that the Liberal party even in that area was a broader church in a sense than it is today.
There's plenty more you can find on Mark Scott on the full to overflowing intertubes - he did a number of 'get to know me' interviews when he got the gig - but let's cut to the chase. No matter how you try to present him, the current CEO of the ABC is no mad ravening socialist.
And if you applied the Tim Blair test - who did you associate with in your past, even if for a millisecond - then he probably comes up slightly Liberal, a lot Christian, and a worker in private enterprise from his days tilling the soil as editor in chief at Fairfax.
So as you'd expect, the comments on Overington's page continued to trot out the conspiracy theories as fomented by Costello.
Can I just suggest an alternative view? One that allows a little bit of room for rural folk, and classical music, and BBC programs, and doesn't get too antsy about the asterisk that represents the listening audience for Radio National (oh okay it breaks the blip but not by much).
The ABC is in fact deeply conservative, and shows like AM and PM are in fact the first port of call for many politicians and many commentariat columnists who want to find out what's happening. And since getting published in a fawning, worshipful way is an important part of a politician's career, they hate it when they get criticized. Or even asked intelligent questions. Which they can't answer. In an intelligent, coherent way. Like: "Are you retiring or running deep in a bid to become leader of the opposition Mr. Costello?"
It's not the job of the ABC to promote the world view of Peter Costello. It is indeed the only real home for political junkies in terms of coverage - unless like John Howard you preferred to cosy up to Alan Jones - but dare I suggest that, if anyone cared passionately enough, they could set up a rival network featuring the best of Australian conservative thinking.
And everybody in Australia, being so starved of such intelligent thought, would just up and pay for it, which would be a great relief because you wouldn't want a capitalist think tank funded from the public purse, now would you. The contradiction would be just too much to bear.
Unless you can stand the sight of the right wing commentariat stumping up for a bit of cash from Aunty while biting the hand that feeds them.
In the meantime, let's also agree that some ABC users think Peter Costello is a dickhead. In much the same way as John Howard did. And who could argue with that.
(Below: more First Dog on the Moon here). 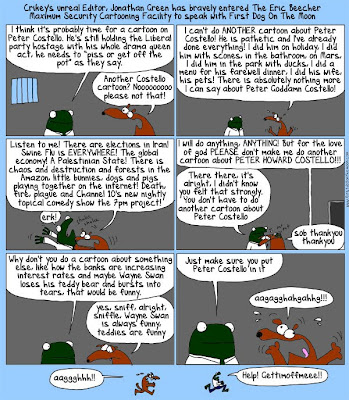