Bob Ellis, Ted Kennedy, Timothy Brown, and a bill of rights that doesn't include Crikey readers isn't any use to anyone 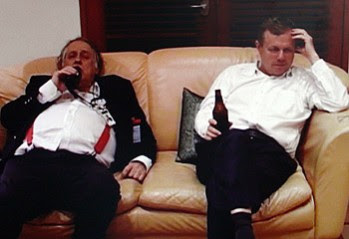 (Above: guess which one is Bob Ellis. And who's that other dude stroking temple and clutching beer?)
Is this the end of Crikey?
First came the desperate desire to engage with female readers, about which we'll pass over in discreet silence, until we get to Jim Wallace.
Then they publish Bob Ellis on Ted Kennedy and Chappaquiddick, the true story.
Bob's source? A friend of an intimate of the Kennedy clan. Put it another way:
This story was told to a close political friend of mine by Dun Gifford, a Bobby Kennedy staffer who wrestled the gun away from Sirhan Sirhan on the fatal night of his boss’s assassination and is now, in the American way, a prominent food writer.
Yep, not even a failed attempt to contact Dun Gifford and get a confirm or deny, just a bit of idle gossip from an unnamed source. Of such gossamer stories can be spun.
I'll leave you to read the story and the comments - wouldn't want to steal Crikey's thunder - and with any number of people ready to point out the holes in the story by golly it brought out a fine flurry of loons. Here's this from Most Peculiar Mama:
This piece of fatuous garbage is only topped today by the announcement by Barry Yobama that he will deliver the eulogy at Ted’s funeral.
This is the same Barry who worshipped at the feet of William (Billy) Ayers and his trog wife Bernadine Dohm,

This is the very same couple who dedicated their communist manifesto to - amongst others - Sirhan Sirhan, the assassin of Ted’s older brother Bobby.

Nice company you keep there Mr President.
Most peculiar momma. Downright weird in fact. More than a match for Bob Ellis. Must have strayed away from Tim Blair's patch, but how have the loons started to find their way to Crikey?
About the only comment I liked was the guy who thought Marcus Einfeld was driving. But of course he got that wrong. It had to be Professor Teresa Brennan, not the dead one, but the other one.
Then elsewhere on the site Timothy Brown offers up What a liberal Bill of Rights could look like.
Timothy is a researcher at the Institute of Public Affairs, but his three main proposals for inclusion in a bill of rights - obviously intended as a bit of provocative shit stirring and liberal bear baiting - are so fatuous, inane and silly, it's impossible to mount the energy to discuss them. All he could manage for his efforts was ten frenzied comments at time of writing, and yet again a loon - this time a person by the name of Madeinaustralia came out of the woodwork to tackle the resident intelligentsia. Again more heat, no light.
About the only inspiration here was one chappie proposing to buy a block of land next to any owned by Mr. Brown and built a very large apartment block, then see how he liked them apples, because bleating to council or courts would be a most unhelpful way to honor the individual property rights proposed by the humbugging Brown.
By golly, if it wasn't for First Dog on the Moon and Ben Sandilands excellent blog on the aeroplane industry (if you're an aviation nut), Crikey would be falling down the must read list. You can already get that kind of dump, tepid, torpid conversation at The Punch.
You'd almost suspect it was a cunning plot to get people to pay up - see, this is the crap we give away for free, but then you see that tucked away behind the pay wall is a piece by Jim Wallace titled Bligh is right to resist abortion radicals.
I could write the rest of the piece in my sleep, but won't because I know it would only turn into a feminist nightmare. Oh yes let's keep abortion a crime in Queensland, it's the only way to go.
I guess it's hard for a web site running on the smell of an oily rag to sponsor serious investigative journalism, but this kind of lowering of the standards smacks of desperation, as did the special pleading to get women involved, which resulted in a piece by Eva Cox on equal pay for women - more than counter-balanced by giving Wallace space to mouth off his standard fundie Christian anti-choice routines.
Generating controversy might help bring new readers, but it might also alienate punters expecting a certain larrikin tone, backed up by some useful insights into the ways of the world.
So how did Wallace get a gig? The Age usually gives his stuff a run every now and then, but weren't they interested and did Crikey step into the breach? And put him behind a paywall? What, I should pay for Wallace, and you give away First Dog for free? Something's not right here.
Some wise words from a rogue, and no Bob Ellis didn't write the lines:
Good name in man and woman and online newspaper, dear my lord,
Is the immediate jewel of their souls:
Who steals my purse steals trash; ’tis something, nothing;
’Twas mine, ’tis his, and has been slave to thousands:
But he that filches from me my good name
Robs me of that which not enriches him
And makes me poor indeed.

So it goes. And so it might went.
(Below: guess which one is Bob Ellis. And who's that other dude? Why doesn't he have the devil's horns and cloven hooves you'd expect of a man more devil than human, posing as a lover of writers and writing, but determined to ruin the Australian publishing industry and civilization as we know it). 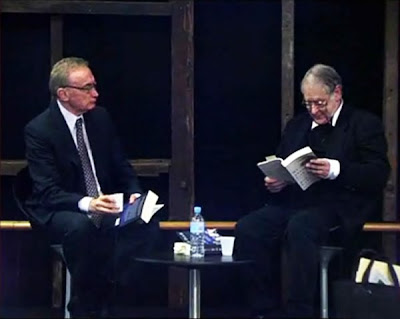