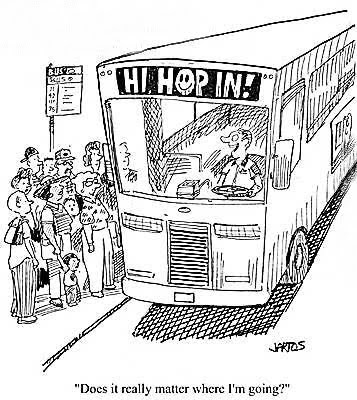 Oops: UPDATE: Before reading the comical story below, you might care to read Stop the non-stop ride nonsense: bus firm, a story about how the bus company involved is thinking of taking legal action against the man who told the story below. It seems the bus in question actually stopped in Gosford.
Ah the fun police, always out to kill fun and a good story.
All we can do is report the facts as they come to hand, or more particularly as the SMH finds new angles on the events. But why oh why did the story sound so credible to those who regularly clamber aboard CityBus (nee CityRail)? And heck I still think the magical mystery tour sales pitch is a ripper angle, and I stand by, awaiting a call from CityBus confirming they're ready to swing into action (seeing as how they managed to apologize for something that apparently didn't happen).
Whatever. Now read on, remembering it might only be a fairy story designed to send bloggers on the full to overflowing intertubes into a twittering frenzy:
Before we get too gloomy around here, deafened by the squawking of the loons, let's take time out to celebrate a story by Andrew West entitled Bus ride home ends in Brisbane.
Now I don't want to steal West's thunder - he catches the heart and soul of the surreal details - but it deserves wide circulation, as it's a classic and heart-wrenching tale of how some innocent Sydney CityRail customers boarded a bus at Hornsby after a two hour delay when the service to Newcastle, via the Central coast, was held up by an accident.
Seven passengers boarded the bus, trying to get home to Gosford or other parts north, and discovered as they roared past Newcastle that they were on the way to Brisbane.
And the contract with CountryLink - for the bus was a replacement for a CountryLink service also delayed at Hornsby - specified that the driver could not pick up or set down passengers along the way. There were two scheduled stops, in small country towns, but it worked out that the passengers were better off hanging in for the ten hour bus ride to Brisbane.
Ah well, never no mind. It was just a significant mix-up for a small number of people, according to the Minister for Transport, and after initially telling the passengers they'd have to pay their own way back, wiser heads realized they'd better reimburse the passengers for their return journey and additional costs.
All's well that ends well, because let's face it, if you catch public transport, you're a pensioner, a student, a wayward youth, a drop kick, a loser or someone heading for a pauper's grave (yes, I catch public transport).
By golly, I reckon you could get a great post modernist novel out of this tale of seven passengers trapped on a bus for ten hours, going to a place they'd never imagined they'd be going. It'd make Samuel Beckett's Waiting for Godot look like the droolings of a rank amateur.
Imagine the rage and frustration as you explored the impeccable logic of the bus driver's legal and contractual position in a dialogue which could run longer than an Andy Warhol film about fog lifting from the Empire State Building. It'd surely beat The Taking of Pelham One Two Three (the original masterpiece, not the boring re-make) hands down with its combination of ennui, tedium, tension and outrage.
But best of all is the marketing opportunities that now open up for both CityRail and CountryLink as they promote a new spirit of adventurism in their tired and huddled and bored passengers. A bit like those mystery trips airlines used to indulge in to fill empty seats - turn up at the airport and suddenly you could be somewhere else for diddly squat expense .
Stop at Hornsby for a couple of hours, then see Australia. Melbourne, Broken Hill, Brisbane. Whatever. Wherever. Whenever.
It's a big country, and all you have to do is roll up for the magical mystery tour. And the Beatles have provided the perfect music for the campaign:
Roll up, roll up for the magical mystery tour, step right this way.
Roll up, roll up for the mystery tour.
Roll up, roll up for the mystery tour.
Roll up (AND) THAT'S AN INVITATION, roll up for the mystery tour.
Roll up TO MAKE A RESERVATION, roll up for the mystery tour.
The magical mystery tour is waiting to take you away,
Waiting to take you away. 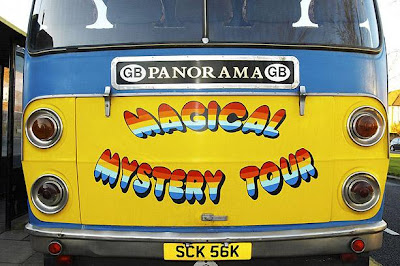 And here's the new outfits for the CityRail, CountryLink and bus drivers operating this exciting new venture: 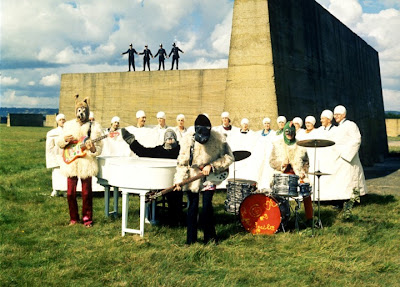 Yep, and we used to make jokes about how CityRail should be called CityBus, as they wheel in buses at the drop of a hat to replace train services for any number of reasons, from track maintenance to mood swings. Rather than work out ways to keep the trains running, like they do in other towns, such as Tokyo and New York.
Problem? Can the trains, call in the buses ...
Hah, how little we knew or understood. This is the one way guaranteed to get the state Labor government back into power. A team dedicated to magical mystery tours. Because like, they're dying to take you away to wherever you want to go ... or don't.
Whatever, just enjoy the ride. Or not.
But you do know how to vote, don't you? Just purse your lips, and whistle while you make a cross ...
Posted by dorothy parker at 8/13/2009 11:01:00 AM