And so to Alan Jones, and talk of chaff bags and drowning kittens ... 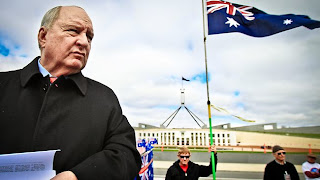 And so on and on:
'The inconvenient truth is that we share this planet with the rest of creation for a very good reason - and that is, we cannot exist on our own without the intricately balanced web of life around us.
'Islam has always taught this and to ignore that lesson is to default on our contract with creation.'

The inconvenient truth!? Shades of Al Gore. How does your average right wing nutter respond?
This nauseating blend of Chucklehead’s own religion (ecomoonbattery) with Islam will be the transitional ideology the remnants of Great Britain pass through on the path to Islamic theocracy. Having been commandeered by its worst enemies, the pillars of British society that would be expected to serve as the foundation of its defense will continue to be instrumental in its fall. (here)
And the best news of all? Britons want Prince Charles as next king:
Prince Charles has overtaken his son William as the people's preferred successor to Queen Elizabeth II in the wake of her Diamond Jubilee.
YouGov's poll for The Sunday Times newspaper found that 44 per cent of respondents want Charles to succeed his mother, with 38 per cent opting for William.
Yes, oh yes! Christopher Pearson will get what he's wishing for ...
Take it away Robbie Burns, erase that memory of the kittens for the pond:
'Twas on a Monday morning,
Right early in the year,
That Charlie came to The Australian
The young Chevalier
Charlie is Pearson's darling
His darling, his darling
Charlie is his darling
The young Chevalier
He was walking doon the street
The city for to view
When he spied a bonnie squirrel
The windae peeking through
So light he jumped up the stair
And tirl'd at the pin
And when the squirrel let him in
He saved the squirrel fair.
He set Gaia on his knee
All in his highland dress
For brawly well he kent the way
To save a Gaia lass
Oh Charlie is Pearson's darling
It's up yon climate science mountain
And down yon global warming glen
We gang a milking go
With Charlie and his brave inconvenient men
And truths ...
Oh Charlie is Pearson's darling ... (and repeat incessantly)
(oh dear, profound apologies to Robbie Burns, and ye can ken the original here).
(Below: artist unknown). 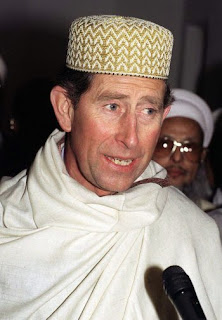