A Godwin's Law swear jar fine? A small price to pay compared to what others have paid at the hands of cheerleading commentariat war mongers of the Haw Haw kind ... 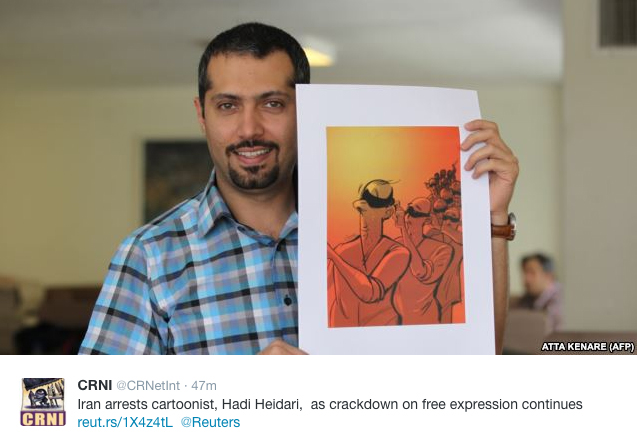 In the mess that is the middle east ... that story here. So much for Iran, Saudi Arabia and all the rest that have served or are being lined up as dubious allies ...

In the meantime, in the mess known as the lizard Oz ... 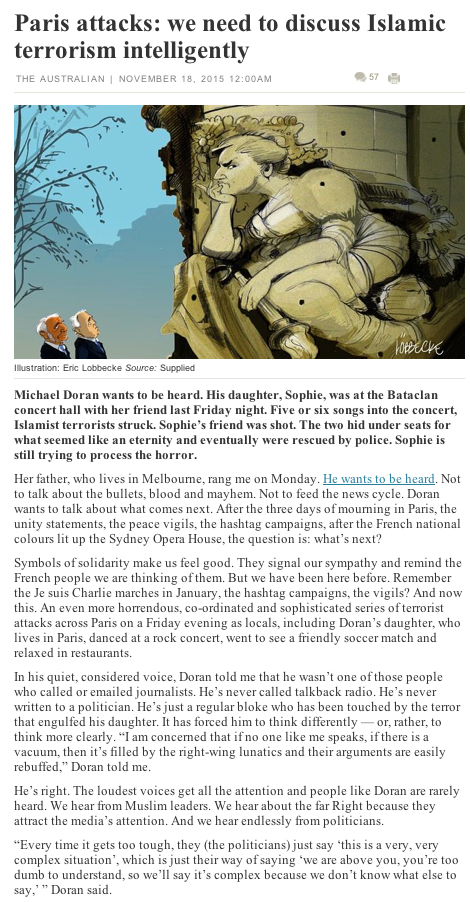 Uh huh. Speaking of the loudest voices, where was Dame Slap when it came to the Iraq war?

Well thanks to the reptiles hiding their archives from public view - a handy way to cover their tracks - the pond has relied on some indirect sources.

In view of all this it is rather amusing to trawl through the commentary of the war's most strident supporters in the Australian media. Mostly they were flinging down their burning arrows of desire in the Murdoch newspapers.
My personal favourite is Janet Albrechtsen's column in The Australian of March 19: "There is a current authorisation from the Security Council for member states to use force to disarm Iraq. That is the law. This war is legal." There was no room for any doubt that there was something worth disarming.

For Burke, the little drummer boys of the war Party were as ‘odious and disgusting’ in their blithe dealings in blood as the Government was. Albrechtsen has been beating the drum loudly to Australia’s war in Iraq since at least 2003 (‘Resolve and Resolutions on Our Side,’ The Australian, 19 March 2003). She scorns those who oppose the war as cowards and appeasers, referring in 2006 to ‘the folly of the Democrat œtuck-tail-and-run  policy’ (‘Iran Good News Not Hitting Target,’ The Australian, 28 June), and more recently to ‘Labor’s white flag cut and run policy.’ She has even accused religious leaders opposed to the war of being ‘caught in a fog of peace’ in their embrace of ‘a sweet-sounding appeasement policy’ (‘Parsons Should Give War a Chance,’ The Australian, 29 January 2003).
Burke thought that ranting like this was not an appropriate way to speak of the spilling of blood, where the death of even ‘the poorest being that crawls on earth contending to save itself from injustice and oppression’ was a matter only to be contemplated with sorrow.
The little drummer girl of Bronte, if she wants to be considered a conservative ‘across the board,’ should perhaps show a little more caution in how she deals in blood.

And per that list, the pond knows - thanks to the angry Sydney Anglicans - that it was actually on 28th January 2003 that Dame Slap was furiously scribbling that church leaders should give war a chance:

In this opinion piece for The Australian, Janet Albrechtsen says that the stance by many church leaders regarding war against Iraq has 'a peculiarly godless, and therefore hollow, ring to it.'

Hollow godlessness because the church leaders flinched from the notion of spilling blut.

And it will be recalled that when the crunch came, and when the truth should have been facilitated, and an apology should have been forthcoming - in lieu of an appearance at trial as a war criminal - instead Dame Slap produced an epic bout of denialism, up there with Lady Macbeth washing blood from paws:

In the aftermath of the spectacle that was last night’s Sunday Night — featuring John Howard with Planet Janet orbiting him with an adoring wibble-wobble — the conservatariat are shouting about the ABC knocking back the “doco”.
We hear that it was a simple matter of not being able to agree on rights and fees, but let the conspiracy theories bloom.
But having watched it, you can see why a non-commercial broadcaster would be wary, since Howard used the occasion to repeat two big lies. The first was that there was no way he could have known that United States “intelligence”, arguing that Saddam Hussein had weapons of mass destruction, was false (it came from a single source, “Curveball”, who made much of it up, for money) — and that it was false to say that the Howard government had lied about the matter.
But no one has suggested that the intelligence was wholly fabricated by intelligence agencies.
What is being suggested is that the United Kingdom and Australian governments were so wilfully incurious about the truth of the intelligence that it amounted to a lie. Given that part of the UK government’s “secret dossier” was a master’s thesis they dragged off the internet, and that in Australia we had an actual intelligence agent — now independent MP Andrew Wilkie — coming out and saying that the intelligence was being misused, blind belief amounted to a lie to the public. Howard’s waffling statement that the Islamic State (also called ISIS or ISIL) arose in Syria is pathetic. IS is a splinter group from al-Qaeda, which used the Iraq insurgency as its university, training thousands of fighters. This ongoing disaster is on Bush, Blair and Howard, and thus will history remember it. (here)

But it's also on Dame Slap, war monger cheer leader, and all the other war monger commentariat cheer leaders, and thus history will remember it, despite the reptiles hiding their archives behind their paywall ...

Is there a parallel? Well of course there is, but it involves the pond putting a hefty sum into the Godwin's Law swear jar ... 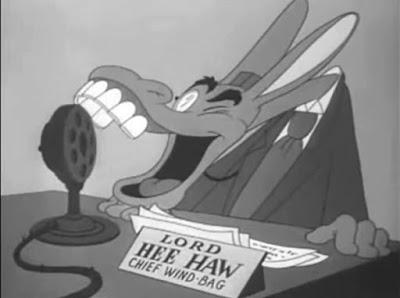 Phew, that was expensive, but worth it, and you can find that cartoon on YouTube here.

And now, suitably primed, it's time for the rest of the war monger cheer leader's current piece: 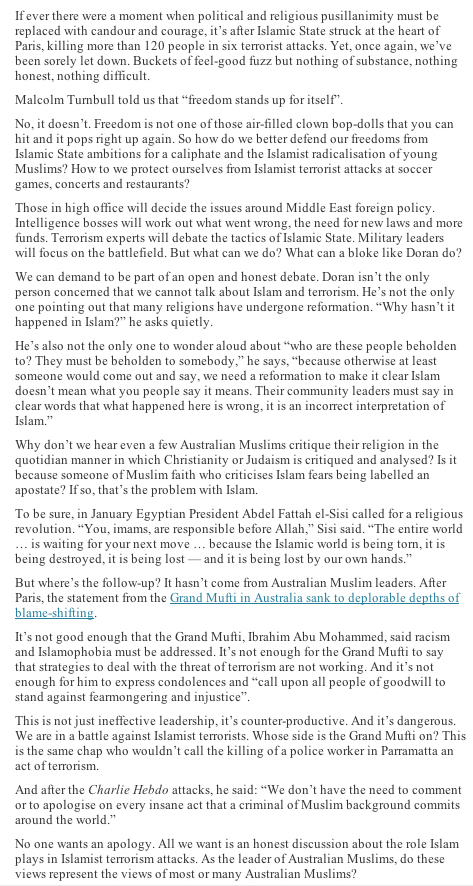 Is there an enormous amount of cheek at work here?

How about some of the costs of the Iraq war that Dame Slap yearned for so devoutly and devotedly?

Forgive the pond for cramming it all together - lives and money lost, all in a bundled heap of tragedy:

The U.S. war in Iraq has cost $1.7 trillion with an additional $490 billion in benefits owed to war veterans, expenses that could grow to more than $6 trillion over the next four decades counting interest, a study released on Thursday said. The war has killed at least 134,000 Iraqi civilians and may have contributed to the deaths of as many as four times that number, according to the Costs of War Project by the Watson Institute for International Studies at Brown University. When security forces, insurgents, journalists and humanitarian workers were included, the war's death toll rose to an estimated 176,000 to 189,000, the study said. The report, the work of about 30 academics and experts, was published in advance of the 10th anniversary of the U.S.-led invasion of Iraq on March 19, 2003. It was also an update of a 2011 report the Watson Institute produced ahead of the 10th anniversary of the September 11 attacks that assessed the cost in dollars and lives from the resulting wars in Afghanistan, Pakistan and Iraq. The 2011 study said the combined cost of the wars was at least $3.7 trillion, based on actual expenditures from the U.S. Treasury and future commitments, such as the medical and disability claims of U.S. war veterans. That estimate climbed to nearly $4 trillion in the update. The estimated death toll from the three wars, previously at 224,000 to 258,000, increased to a range of 272,000 to 329,000 two years later. Excluded were indirect deaths caused by the mass exodus of doctors and a devastated infrastructure, for example, while the costs left out trillions of dollars in interest the United States could pay over the next 40 years. The interest on expenses for the Iraq war could amount to about $4 trillion during that period, the report said. The report also examined the burden on U.S. veterans and their families, showing a deep social cost as well as an increase in spending on veterans. The 2011 study found U.S. medical and disability claims for veterans after a decade of war totaled $33 billion. Two years later, that number had risen to $134.7 billion.
The report concluded the United States gained little from the war while Iraq was traumatized by it. The war reinvigorated radical Islamist militants in the region, set back women's rights, and weakened an already precarious healthcare system, the report said. Meanwhile, the $212 billion reconstruction effort was largely a failure with most of that money spent on security or lost to waste and fraud, it said. (here)

It begins to put a different slant on Dame Slap's cheer-leading, but let's finish off her current rant: 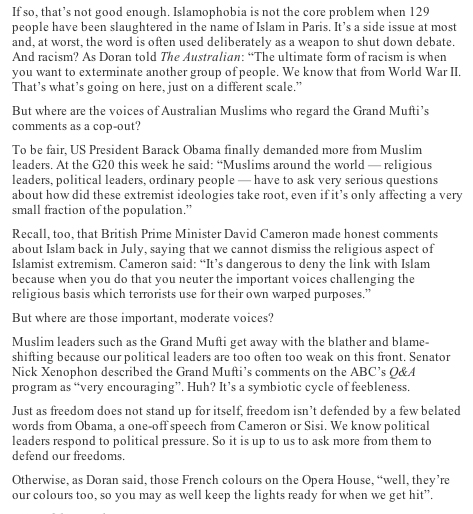 They locked away Lord Haw Haw before they hanged him ...

But in Murdoch reptile land, brazen shamelessness is its own reward, and an absence of regret, apology and remorse is the only constant ...

Sadly the pond seems to have drifted away from the stated aim of discussing terrorism intelligently, but if Dame Slap is setting the standard for intelligent discussion, perhaps that's just as well ...

And so to a Pope cartoon, as Europe deals with the folly of Bush, Blair and Howard ... and their consorting cheerleaders and concubines ... and more Pope here. 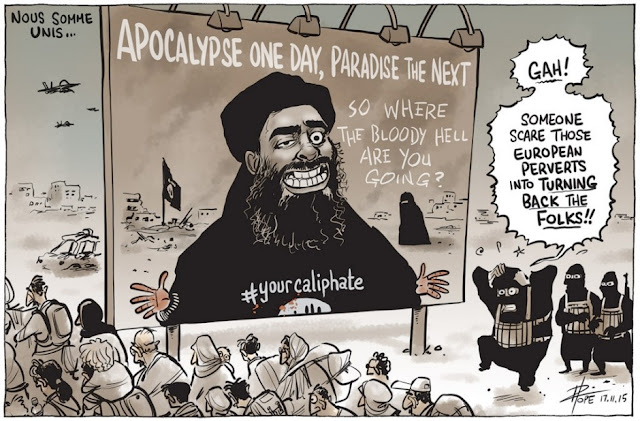