In which the pond spends some quality time with the reptiles' chief stenographer ...

Meanwhile, on another planet: 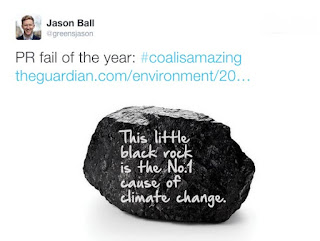 Well that's just a screen cap, and the story and the commercial's running here.

And elsewhere on the full to overflowing intertubes: 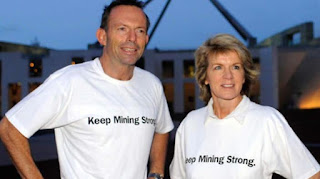 Meanwhile, on another planet: 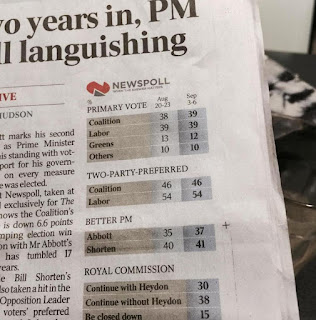 No wonder the reptiles are getting agitated, no wonder the reptiles have anxiety attacks about the fiendish ABC, and their wicked way in beguiling the youffs of the country down the path of leftist thinking, turning away from the angry old white men who run the lizard Oz, who are, in turn, companions, consorts and forelock-tugging fops to those who happen to run the entire country ...

It's shameless and shocking, and naturally the reptiles' stenographer was on hand to record every outrage:

It so happens that the pond learned more about Ms Markson's family than the pond ever needed to learn on the weekend, and thanks, what's more, to a fellow reptile.

“He could have been prime minister,’’ says Markson, looking through rose-coloured glasses at Latham’s controversial 13-month period as federal opposition leader in 2004-5.
Latham became the biggest star in Markson’s talent stable a week ago after, according to Markson, he called the promoter and asked him for his representation.
That call immediately catapulted Latham to premier star status at Markson Sparks! where, a week earlier, 2009 Biggest Loser host Ajay Rochester and heavyweight boxer Joe Bugner were his biggest assets.
The call from Latham to Markson followed an approach to Latham from Channel 9 to join a panel of talent for a one-off evening show pilot hosted by Karl Stefanovic, in the style of ABC-TV’s QandA, and being shot next week.
Now Markson, who recalls first meeting Latham 15 years ago at a Gough Whitlam tribute dinner — the night Latham lost his cool with a Sydney taxi driver he believed was ripping him off — is looking forward to signing Latham to a lucrative media deal — and taking his 20 per cent cut.
“His value is confidential and commercial — but yes, I’ll get my 20 per cent,” said Markson. Markson admits he is yet to make a dollar out of Latham, who retired from his job as a columnist for the Australian Financial Review following backlash after he criticised domestic violence campaigner Rosie Batty for taking money to talk about her personal tragedy as an “entertainment bureau” speaker.
Media insiders look past enraged Batty supporters when they say Latham still has currency, with an election looming in late 2016 and television networks in dire need of provocative and informed political talent.
By association, that could mean a payday is imminent for Markson, who has been through a challenging few years.
In the past year Markson has lost money on a planned Australian tour by soccer great Pele after the football star pulled out sick, costing Markson a six-figure investment.
He also did his dough on a tour by boxer Floyd Mayweather Jr when the wife-beater was denied a visa.
While Latham’s image is in need of some spit and polish, Markson’s stable at Markson Sparks! has also been in need of a star to make it relevant again. The new association has the potential to resurrect not just one career, but two — that of the prickly former pollie and of the relentless Sydney promoter.

And so on. You can google the source if you like, but it was simply too much of an information overload for the pond, and it almost produced a kind of sympathy...


Almost ... but back to the chief stenographer's scribbling.

It seems after days of maintaining the rage about the ABC and the PM, it's ended with not so much a bag but a whimper.

The news isn't nearly as exciting as Latham's latest hopes and dreams, aided and abetted by a Markson. He might still be a contender ... we might yet have more meltdowns on a large screen somewhere near you.

Sadly, other grand opportunities have gone astray, if we're to believe the chief stenographer. It seems that the ABC allegedly canned a pilot for Grace Collier, with possibly Mark 'break a taxi cab driver's arm' Latham or Peter the oscillating fan Van Onselen as a co-host. What a tragic loss to Australian television. Why Grace is such tremendous talent ... and think of the work for doctors dealing with glazed eyeball syndrome ... and how wretched of the ABC once again to fail to seize the main chance.

As for that main story featuring the PM and the ABC, the ABC's representative decided to have a word with the reptiles. Or more to the point, scribble a word or three ...

And here the pond has a bone to pick with the ABC.

You see, Mr Finlayson, your reply has been slotted behind the reptile paywall, and that's what they wanted. Stir the mud, drum up the controversy, and then sit back and flog their subscriptions ...

But actually Mr Finlayson, you're a public servant, and the reptiles shouldn't have privileged gold bar access to yours and the ABC's reasons and thinking, and truth to tell, the reasons are worth spreading a little wider ...

.. as we were saying before being so rudely interrupted, according to Go Ogle, there's no sign of your copy turning up anywhere else than on the reptile site.

Why isn't it somewhere on the ABC? Why isn't on that tedious feature of the ABC, The Drum? Aren't the drummers entitled to hear the sounding of the drum? 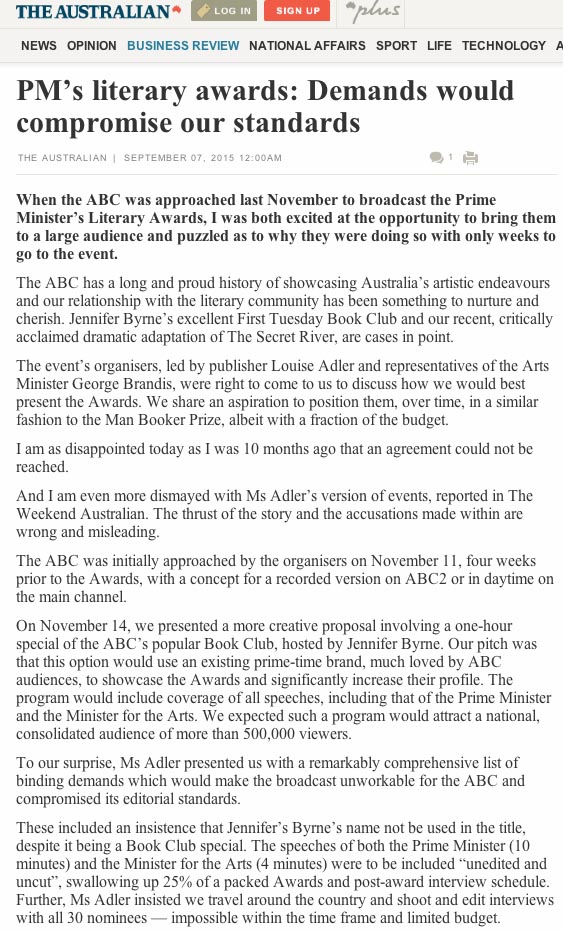 14 minutes of a pollie gabfest in the guise of handing out awards to authors, and Adler went along with it! But do go on: 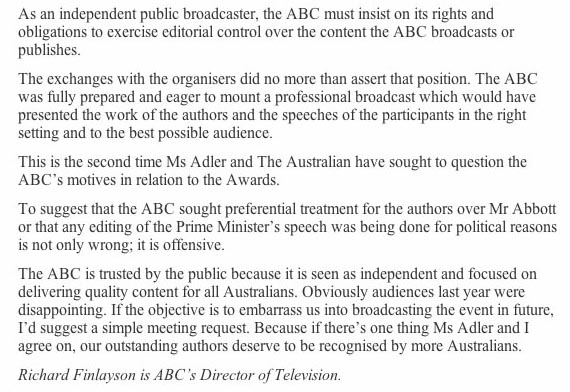 Well there's y'artz in Australia at the moment ... little more than a propaganda outpost for the federal government.

The chief stenographer also managed to shed a little more light on the peculiar world of the dog botherer: 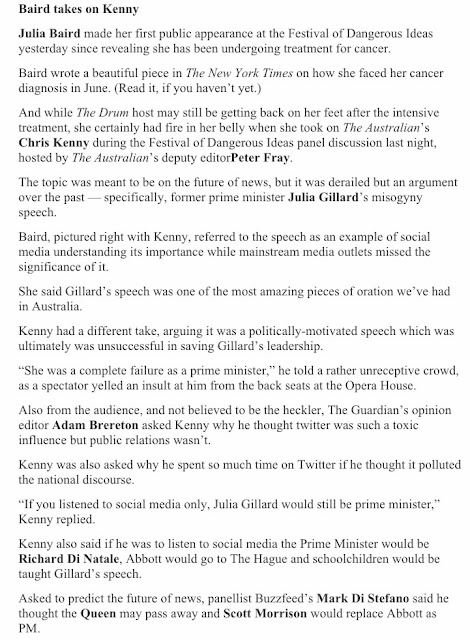 What a strange, unhappy, twittering, wittering man, and with such a deep persecution complex.

And there was another item: 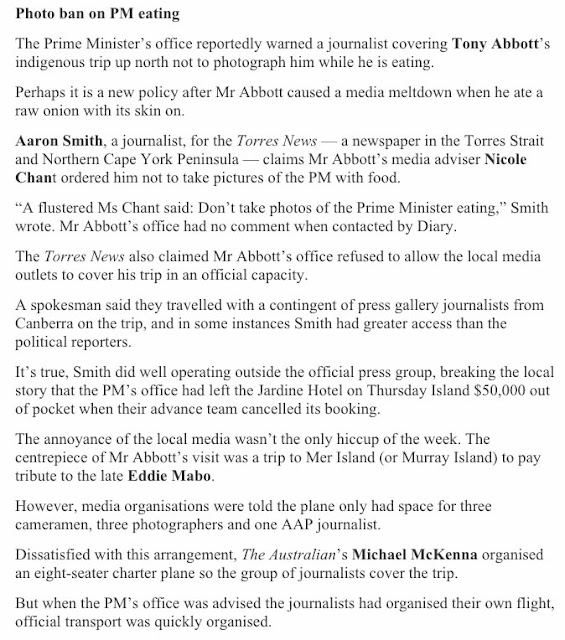 Well the pond's already noted the Torres News story days ago - thanks to twitter, the pond is apparently ahead of the chief stenographer.

But to keep the enveloping gloom away, the pond did begin to wonder why the PM's office might be so paranoid about someone taking a snap of Abbott eating.

A frantic search high and low of the full to overflowing intertubes revealed not a single reason for the paranoia.

All the pond discovered were snaps of a man with a hearty, healthy appetite, ready to go the extra yard to make sure his ratings are as strong as the lizard Oz has reported today. 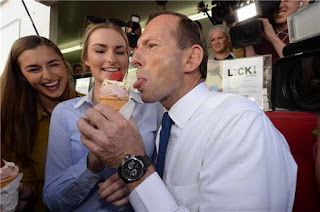 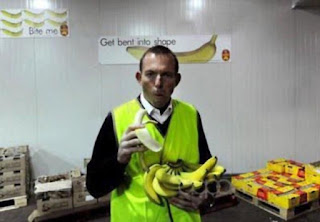 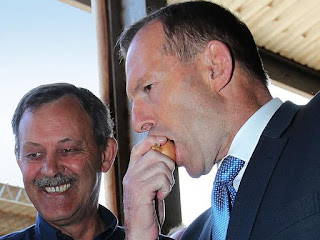 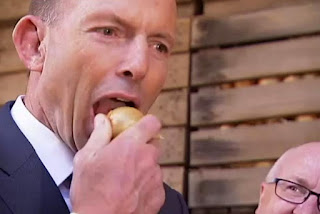 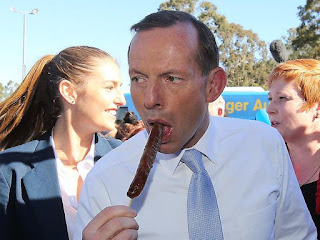 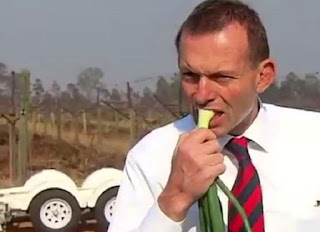 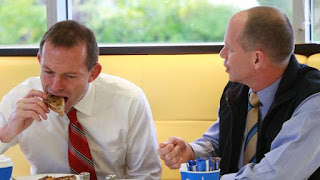 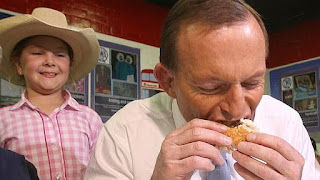 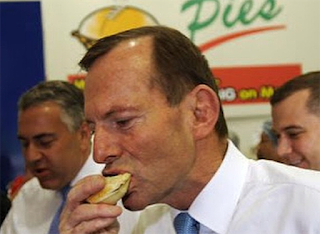 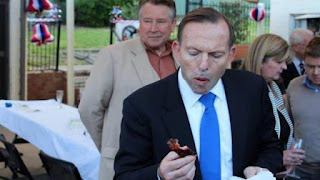 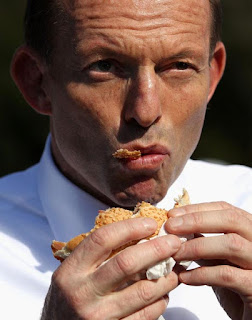 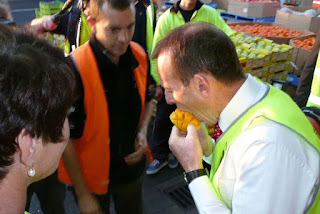 There you go refugees and climate freaks, it's coal, coal, coal, mangoes and bananas for the woorrrld ...

And now, updated by special request, because enough is never enough, and more is always more-ish: 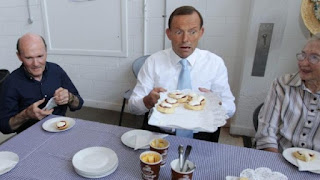 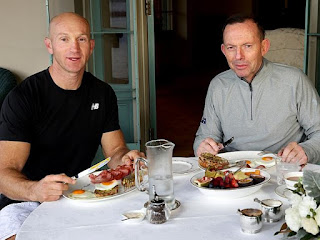 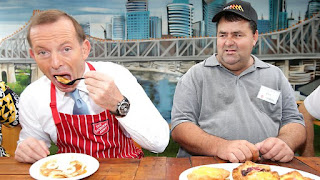