In which the pond shares a fizzy kool aid sherbet with the reptiles of Oz on the perils of twittering away ... 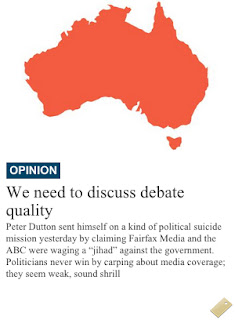 The pond is proud to present an important insight by the reptiles of Oz into matters of bias, thanks to a splendid editorial emanating from the office of the reptile in chief.

What's the bet that at some point the reptiles, basking in the glow of their self-praise, will display a remarkable capacity to crawl up their own fundament?

Peter Dutton sent himself on a kind of political suicide mission yesterday by claiming Fairfax Media and the ABC were waging a “jihad” against the government.
Politicians never win by carping about media coverage; they seem weak, sound shrill and provide more distractions from messages they self-evidently are struggling to convey. The act of complaining exacerbates the difficulties; better to call out jaundice and assert your own authority during interviews in real time. That said, there is nothing to suggest he wasn’t right.

Indeed, indeed, there is nothing at all to bring the minister's competence into question: 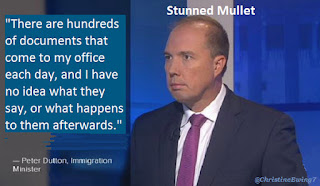 Oh dear, another example of a Dutton meme, with millions clogging the full to overflowing intertubes and threatening to bring it to a halt.

But please do go on, the pond is profoundly sorry to have interrupted this important message. Can we get to the crawling up the fundament bit please?

There is no need for those interested in robust and productive debate to get bogged down in tit for tat allegations of media bias. The issue at hand is more about quality control. It should be no surprise that when groups of mainly young journalists are left to their own devices they will reflect the green, anti-establishment and progressive views of their cohort. That is why the tendency of the national broadcaster to operate as a staff-run collective takes it ever away from the mainstream and why, in commercial media, this will also be the natural slide if there is no strong and experienced editorial guidance. At The Australian we know newspapers and media organisations cannot make perfect calls on each and every issue but the general tone, crucial editorial decisions and quality of coverage and analysis will be greatly enhanced, and protected, by the collective wisdom of journalists and editors who have spent decades amassing knowledge and insight in their chosen fields.

Splendid stuff. The benefits of having a bunch of angry old white males, embittered beyond even what their aged years would suggest, running the show ...

At that moment, the pond drank deeply of the kool aid sherbet.

And now, since the pond can never get enough of berating the young for their foolish ways, can we also have some angry old men trotting out their fear of the new-fangled technologies that pose such a threat to the world?

The trashing of media standards, devaluing of journalistic experience and persistent tendency for even traditional media stalwarts such as The Sydney Morning Herald and The Age to allow the social media tail to wag their editorial direction is a live issue of public concern. The interplay between media and politics is crucial for any democracy, and no less so because the landscape is changing with tectonic shifts in the digital landscape. Crucial elements such as experience, fairness, good taste and social responsibility should not be sacrificed in the pursuit of Twitter-generated clicks or Facebook shares. To be sure, boosting online and mobile readership must be a crucial element in any strategy for print, radio or television. But if the quality of the product is diminished in the process, then rather than avert the road to ruin, companies may find a short cut.

Indeed, indeed. Truly, the ponds it sickening to see the sort of cheap, uninformed jibes that do the rounds amongst the twitterati: 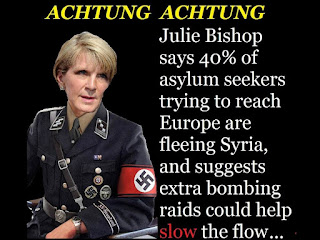 Where do they get these Godwin's Law smashing cheap, sordid ideas? 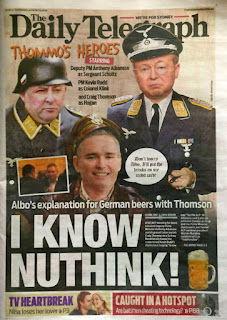 Sorry, where were we? The pond seems to have lost the reptilian gravitas demanded of the occasion:

It is important to nurture emerging talent without undervaluing the contribution of those who have seen governments rise and fall, markets boom and bust, threats emerge and pass, and scandals come and go.

Oh dear. Let us sing a song of tedious, boring old farts, in Homeric form if you will ...

When we see a relevant story about Andrew Hastie turned into a front-page slur against the SAS commando turned political candidate we have to wonder about the checks and balances at play — especially coming just weeks after Fairfax was found to have shown malice against Joe Hockey. When the ABC and Fairfax became excited by the Australian Border Force press release story, they didn’t stop to ask whether our law enforcement authorities would plan an operation for which they had no legal authority. By following a Twitter storm they appeased a fringe audience while offending the good sense of a wider readership. In June The Sydney Morning Herald called for Bill Shorten to resign in the wake of his appearance at the trade union royal commission, but then just two months later it called for the commissioner to resign. This immature volatility smacks of an effort to exploit the vibe of the day rather than reflecting coherent values or providing a reliable collation of news and analysis on which readers can rely.

They really do have the best form of kool aid, don't they? So firm and sure in their delusional grip on their own delusional reality.

The pond really has become an absolute devotee of the reptile editorialist, perhaps the best comedian since Woody Allen gave up stand-up and went off with his step-daughter.

The pond firmly resolves never ever to indulge in twitter again. 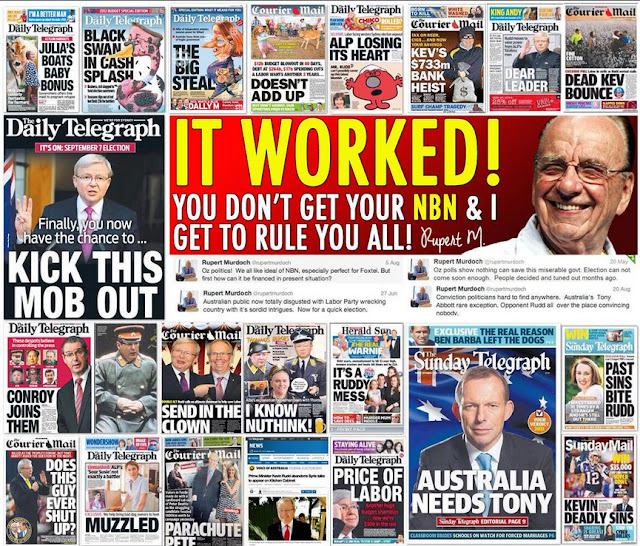