In which Moorice unburthens himself to relieve the Friday gloom, and the pond claps hands with glee ... 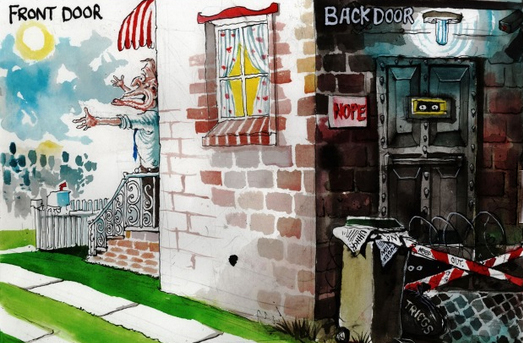 But be still, beating, throbbing, pulsating heart, because today even the immortal Rowe has been eclipsed, shaded, by exciting news.

Friday is usually a slow day at the pond, a dirge day, a funereal march, a torpid slide into the weekend, but for some unknown, perhaps mystical reason, Moorice has decided to unburthen himself:

... from your love I have a warranty
To unburthen all my plots and purposes

... 'tis our fast intent
To shake all cares and business from our age;
Conferring them on younger strengths, while we
Unburthen'd crawl towards death ...

And so on, but enough pretentious quoting of MV and KL, a sure sign of a progressive wanker (how long ago was it that conservatives loved the Elizabethan theatre?), because now we must turn towards the feast of Moorice:

Oh the pond just knew it. It's going to be a delicious rant, a stomping of the feet, a foaming at the mouth, a railing and a keening and a moaning and a berating ...

All centre stage in reptiles of Oz la la land, the one true bastion of free speech left in the land ... for the barking mad, the alienated conservative howling in the wilderness at the pain of it all... 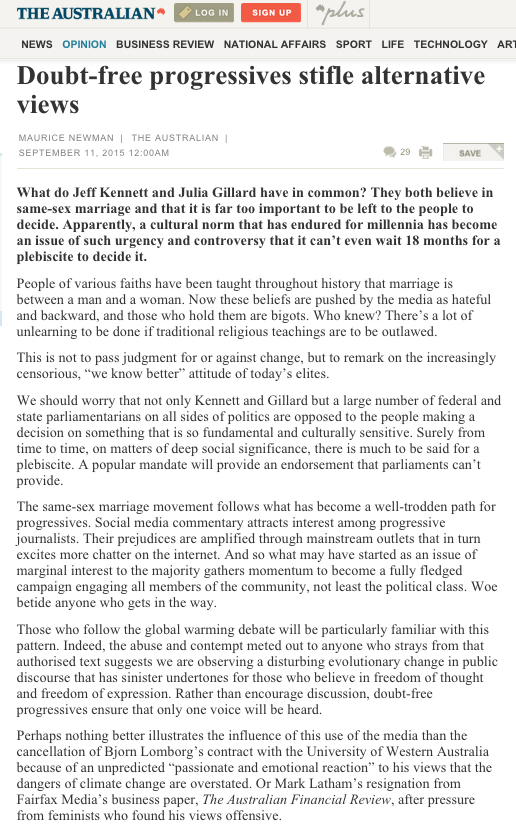 That starting off with gay marriage and the linking of Jeff Kennett and Julia Gillard as dangerous progressives was an absolute masterstroke.

And then the absolute certainty that marriage was between a man and a woman (and not the many excellent alternatives proposed by that obsolete authority the bible) being paraded one more time, only to crumble into the abject, relativist uncertainty of "this is not to pass judgment for or against change ..."

And then to invoke the shocking role of chatter on the internet. How dare people who know how to use a keyboard amplify their prejudices this way. Why the next thing you know they'll be democratically expressing their opinions, and we can't have that.

Such idle chatter, such a free for all, has disturbing undertones for anyone interested in restricting freedom of thought and freedom of expression to purse-enriching discussions behind a Murdochian paywall.

Everyone knows it's only fair, right and just that people must pay the Chairman so that he in turn can reward his forelock tuggers and simpering and fawning lickspittles. Now that's freedom of thought and expression, at a decent and fair price ...

Why nothing better illustrates this than the pampering and indulgence offered towards Bjorn Lomborg.

And as for Latham, perhaps you might be better off reading the truth behind Mark Latham's resignation.

Well it might be a little closer to the mark than Moorice's simplistic rendering.

But hey ho, nonny no, after such a splendid start, the pond was slavering in anticipation, as no doubt the ABC, SBS, the Fairfaxians and all the wretched others on this climate science free earth would be given a jolly Moorice rogering.

And being a rant, what's the bet it's a long one, and with such a long list of mortal oppressive repressing enemies that the paranoia might slide off into next week ... and what do you know, they're all vastly more significant than Chairman Rupert's control of a majority of media outlets in this land of Oz ... 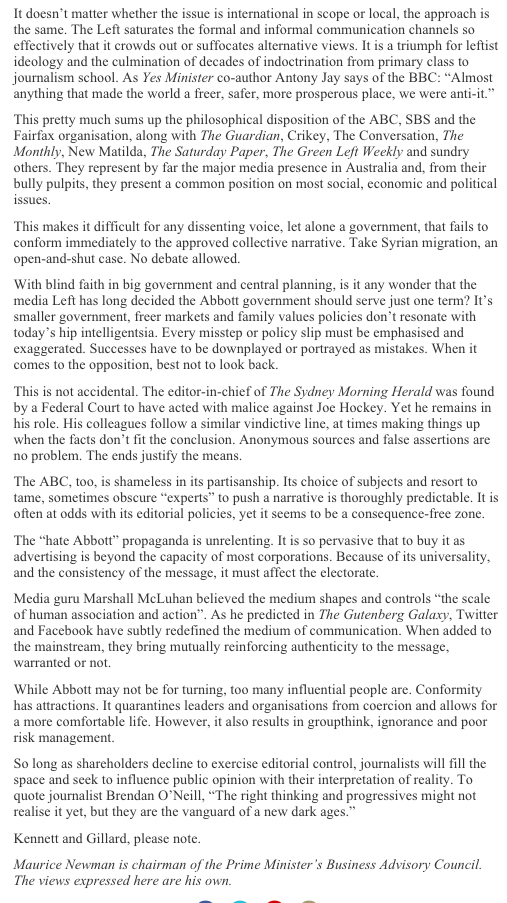 Ah, the hip intelligentsia. How spot-on of Moorice to spot the trouble-makers. No doubt it's the beards, all trim and knowing, or perhaps it's the tattoos. The pond is almost certain it read somewhere that tattoo ink makes its way to the brain and ruins the intelligence of bright young minds ...

Unlike Moorice, a towering intellect of his time, and so free of bias and prejudice and an inclination to rant and froth and foam at the mouth.

And how remarkable to learn that Marshall McLuhan predicted Twitter and Facebook in The Gutenberg Galaxy... if only the Canadian could have patented his ideas ...

While book-lovers sometimes deride the blog/tweet/Facebook post/text message/YouTube video/surfing/gaming/Skyping world we’ve created, I don’t think proclaiming it right or wrong, or better or worse, is useful. I prefer McLuhan’s approach which is simply to ask: how far has new media seeped into popular consciousness? By that measure, book-lovers may find themselves in the position of King Canute trying to hold back the tide. Although we may wish that it didn’t wash so far ashore, it serves no purpose to judge the tide. (here)

Indeed, indeed, which only leaves the pond to wonder whether McLuhan, after his appearance in a Woody Allen movie, might also have had anything to say about the Murdochian echo chamber ...

You know, the one where the Murdochian commentariat read each other and repeat each others' thoughts, until each one disappears up the others' fundaments, thereby resulting in an entirely exotic version of a new dark ages ....

And so suddenly, instead of being an irritating gadfly on the rump of life, Brendan O'Neill becomes an authoritative journalist, and his stupid remark about a new dark ages coming from thinking, rather than conservative fundamentalist ratbag religious fundamentalists takes on the authority of an Elmer Gantry style holy roller ...

Talk about a most excellent way to end the week.

And so to a Pope cartoon, which will be aided by a little local knowledge.

The wondrous Northbourne Avenue flats are mentioned here, with a handy photo ... 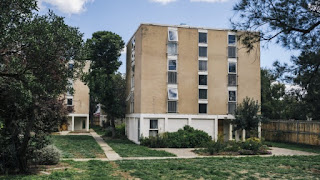 And those who think that there are plenty of walri down south may Greg Hunt Palmyra here. 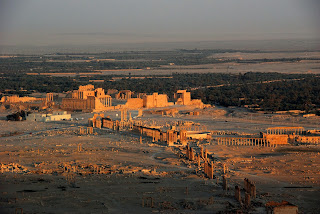 A little tang of Rowe and Pope, a sorbet on the tongue, helps the cod liver oil of a Moorice outburst go down ... 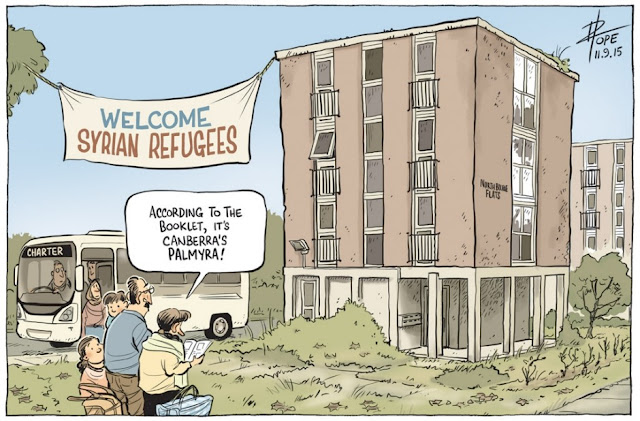