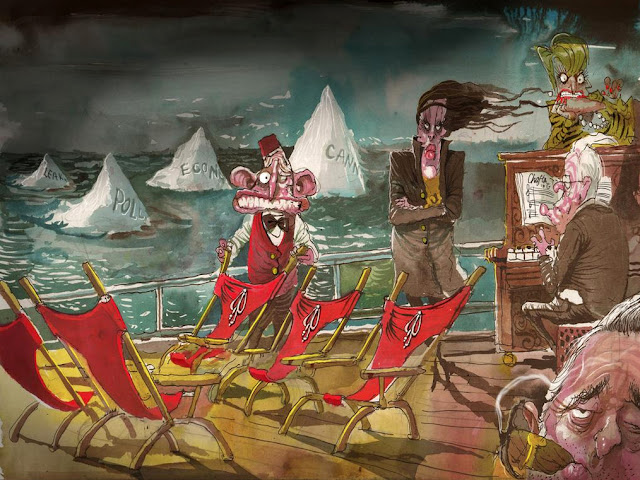 The pond doesn't know which way to move.

So much to see and do, so much low hanging fruit ripe for the picking, so many deck chairs and so many icebergs ... and so many more Rowe cartoons here ...

Apparently the Captain is off to kick the can of Canning a bit further down the road this weekend. Who knows what open mike joke will make life that little bit more worth living? 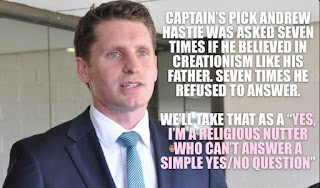 Oh the memes are running wild and free. 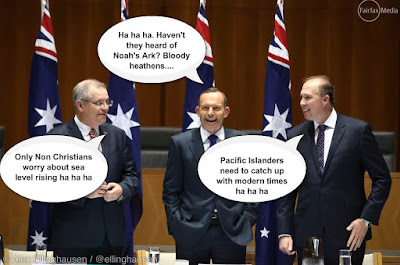 And the pond just loved this Ellinghausen: 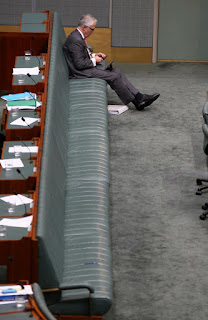 And at one point the pond was going to run, in full, the latest appalling racist outburst from the Bolter, but it stuck in the craw. The pond hesitated. Even a site dedicated to the best of perverted reptile filth thought it was probably best suited to a sewer rather than a blog.

And then, happy days,  it turned up in much shorter form as a meme: 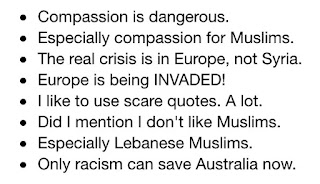 But can racism save the Captain? Now that the Bolter is so stern about the reluctant gesture of compassion, which immediately dissolved into chaos and confusion and Detective Plod's idea of a joke ...

As usual, the reptiles did their very best to distract. It seems militarism remains a firm favourite, a beacon of hope in these troubled times: 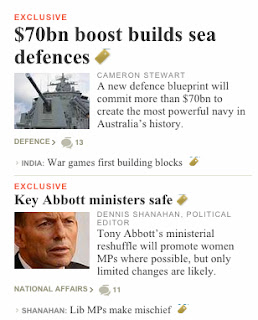 But look, joined at the hip with the Captain's most powerful navy in Australian history, is the bouffant one trying to pour oil on troubled waters.

There's nothing much to the bouffant one's story. A few womyn dragged in to dress up the feminist credentials, but Detective Plod is safe - well you always need a top-notch stand-up comedian for the Friday drinkies - and so is Kevin Andrews, because everyone wants a stick in the mud to stay stuck, and jolly Joe is safe, because hasn't he done well, and Andrew Robb is safe because who else could look after big pharma and Hollywood, and besides, it's all the fault of someone else:

Senior ministers are becoming increasingly frustrated with backgrounding from Liberal MPs to the media leading to speculation about Mr Abbott’s leadership or the sacking of ministers. “These people are going to have to be called out at some stage,” one cabinet minister told The Weekend Australian yesterday.
Christopher Pyne said on the Seven Network yesterday: “These stories are speculative, they come and go, they take a journalist 10 minutes to write and they do all sorts of distracting damage during the day.”
The reports yesterday were part of a string of media stories speculating about possible frontbench changes since Mr Abbott indicated last week that he could have a reshuffle towards the end of the year.

Well played bouffant one, and in due course hopefully you can join Rebecca Weisser on the Arts Council. Quick, while the barbarians sack Rome, make sure you get your share of the prize.

And the result? Further evidence that Abbott is now a degutted, powerless leader, without the strength to reign. The backdown was quick and almost complete - not enough to remove saucy doubts and fears and paranoias - while the protection racket for indulgent, inept, ideologically rabid ministers remained in place ...

Rebecca Weisser for the Arts Council! 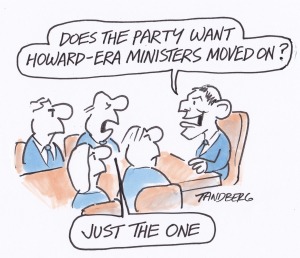 Over at the AFR, Phillip Coorey brooded about the Captain in Tony Abbott hits the phones as leadership talks heat up ... (paywall protected):

One minister called the list published in The Daily Telegraph "the most Machiavellian act ever perpetrated".
"This is a bastard of an act...

And Laurie Oakes was astonished in Mistrust, backstabbing and seething ambition:

The motivation for Abbott’s consideration of a ministry purge, the newspaper report suggested, was to head off a feared leadership challenge from Malcolm Turnbull.
The finger of blame for yet another self-inflicted wound was being pointed firmly at the Prime Minister’s Office. ­Abbott’s controversial chief of staff, Peta Credlin, was ­inevitably a suspect. “That’s the problem when you brief selected journos as much as Credlin does,” a Liberal staffer texted me.
He ­asserted that “everyone knows” the PM’s office was involved in feeding out the story.  (paywall protected, google text for more).

Oakes was overwhelmed by the monstrous stupidity involved:

... the question that has to be asked is why Abbott, Credlin or anyone else close to the PM would do something as stupid as planting such a story.
The resulting anger would have been easily foreseen. You hardly need to be a Rhodes scholar (Abbott is one) to work out that it would further destabilise the PM and increase the likelihood of a challenge.
Abbott and those around him have often shown lousy judgment, but could they be this dopey? It’s hard to believe.
One Coalition veteran, noting that the fallout will benefit the ambitious Turnbull, argued that he or one of his supporters had planted the story in a way that made it look as though the PM’s office was ­responsible. “I can smell a bit of desperation in Malcolm,” he told me. “Time is running out for him to challenge. The window will close at the end of the year. But he hasn’t got the numbers. This helps. It’s clever.”
But why would an experienced journalist take seriously something from the Turnbull camp purporting to set out ­Abbott’s thinking on a reshuffle? It makes very little sense.

Yes, why did the Captain of the Titanic keep on at full speed through an iceberg-saturated sea?

It made very little sense ... but that's where we are, in the valley of the senseless ... and the ineffably stupid.

Put Rebecca Weisser on the Arts Council board! Crack a joke about the comical natives ...

As always, when in doubt, when confronted by chaos and confusion, the pond turns to the official voice of the reptiles emanating from the hipster Surry Hills bunker with authoritative advice. And what do you know? 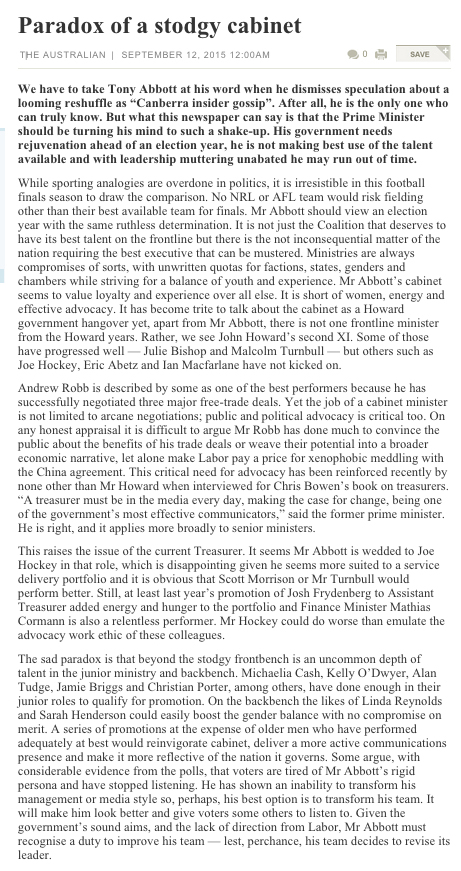 And who's the biggest, most obvious member of the second XI?

Well you don't have to look at a Tandberg cartoon to know it's the Captain himself ... so those last few lines in the reptile editorial sound almost ominous, kind of like a threat ...

And so the hills are alive with the sound of endless speculation, and it's only going to get better, which is to say better for the pond, and worse, which is to say lousy for the Captain, and what joyous times we live in ...

Oh and did we mention that pandering by gorgeous George to the ideologically rabid and certainly one of the more stupid reptiles doing the rounds? 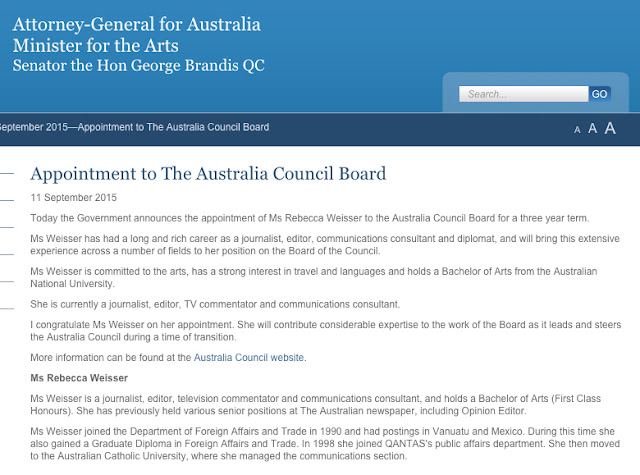 And so to a cartoon by the immortal Pope, though the pond has a bone to pick with Mr Pope, while noting that there is more immortal Pope here: 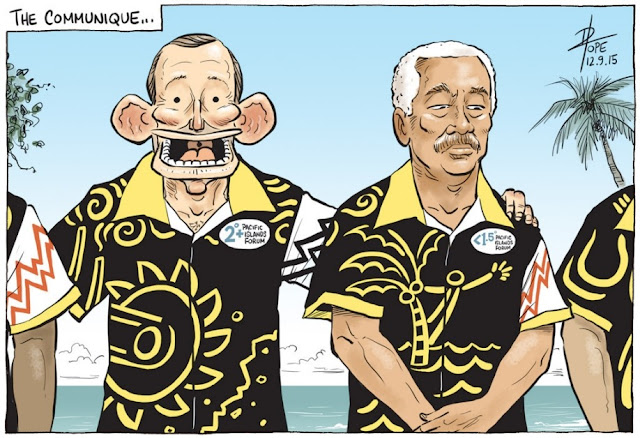 Come come, Mr. Pope, no foot in the mouth, no boom shadow, just a subtle reference to coal, coal, coal for the woooorrrrrlllldddd?

Sadly the pond's adolescent tastes were formed by the photoshoppers at the Daily Terrorists way back when ... 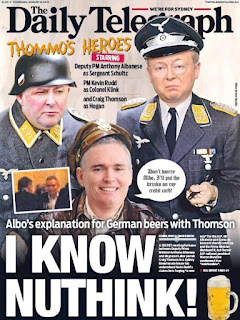 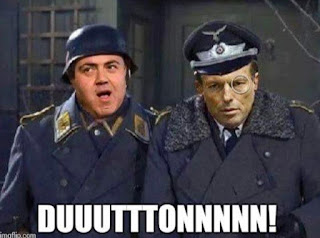 And so to a final cartoon on this day of memes ... because Twitter irritates the reptiles so ... 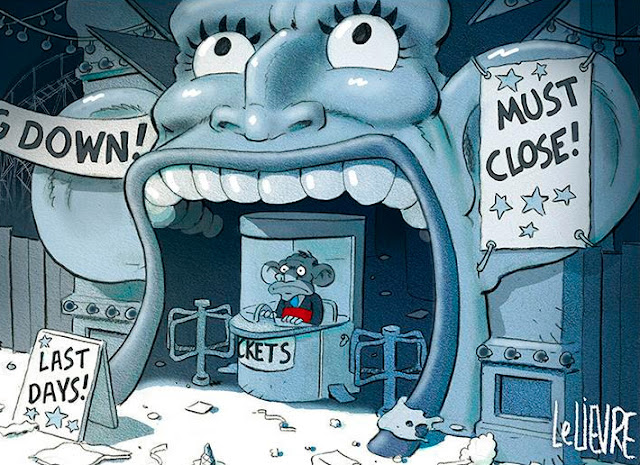