I’ve never leaked or backgrounded against anyone. And I certainly won’t start now.

So if you wear rubber gloves and your office does it for you, you didn't do it?

Makes the pond wonder about that other promise:

There will be no wrecking, no undermining, and no sniping.

And as for the rest of the blather:

The nature of politics has changed in the past decade. We have more polls and more commentary than ever before. Mostly sour, bitter, character assassination. Poll driven politics has produced a revolving door prime ministership which can’t be good for our country. And a febrile media culture has developed that rewards treachery.
And if there’s one piece of advice I can give to the media, it’s this: refuse to print self-serving claims that the person making them won’t put his or her name to.
Refuse to connive with dishonour by acting as the assassin’s knife.

Well there's some classic chutzpah, and speaking of the febrile, it doesn't get much more febrile than the dog botherer:

Speaking of a febrile media culture: 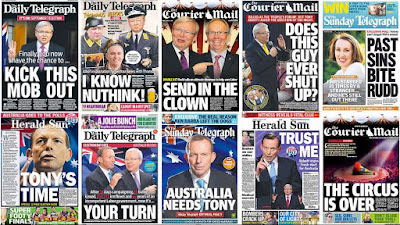 The deeply coarsened, crude and feverish media circus that brought him to power, and now he complains about it ...

So now will the persons or persons who debriefed the Terror on a weekly basis come out of the closet?