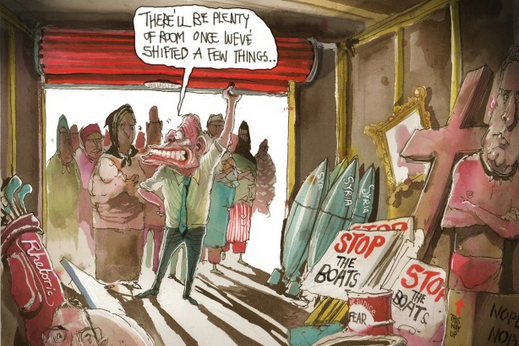 (Above: and more excellent Rowe here).

Luckily the pond was out plane-spotting at the time and missed it, and so there was no need to thrust a spiked heel through the TV set, and then go about the tedious business of finding a replacement.

There's a sweet little spot at Mascot - the pond still thinks of it as Mascot airport, remembering the times spent listening to the planes tune up while bunked down in Ninth street - where plane spotters can watch the flying apartment blocks taxi, take off and land, while waiting to pick up the incoming FIFO worker.

It's magical, especially around peak at dusk, and so the pond missed this exchange on 7.30:

LEIGH SALES: Let's quickly run through some other issues, Prime Minister, starting with the economy. When Labor left office, unemployment was 5.8 per cent; it's now 6.3 per cent. Growth was 2.5 per cent; it's now two per cent. The Australian dollar was 92 cents; it's now around 70 cents. The budget deficit was $30 billion when you took office and now it's $48 billion. How do you explain to the Australian people that you were elected promising, in your words, to fix the budget emergency, yet in fact, Australia's economic position has worsened under your leadership?
TONY ABBOTT: Well I don't accept that. The boats have stopped. The carbon tax has ...
LEIGH SALES: We're talking about the economy.
TONY ABBOTT: The boats have stopped ... (here)

And then further on, the same tired refrain, the same simplistic, simple-minded, addle-brained, brain-dead mantra, the three word slogan trotted out:

TONY ABBOTT: Now I am extremely proud of what's been achieved. I'm very proud of the fact that all the major commitments that we made pre-election have been honoured. The carbon tax is gone, the boats are stopped ...

And so to this exchange, so rich and redolent in irony after all those years of relentless nattering negativity and talking down the country:

LEIGH SALES: But Prime Minister, I just ran you through numerous independent statistics showing that the economy is in a weak position. I'm just wondering: why has the language changed so much that it was an emergency when the numbers were better than that, but now it's not an emergency? TONY ABBOTT: And let me give you some statistics. Bankruptcies at record lows, company registrations at record highs, car sales and housing approvals at near-record highs. So, a lot of very good things are happening in our economy, and Leigh, I refuse to talk our country down. I refuse to talk our country down and I hope the national broadcaster might join me in looking for the good and boosting our country, which has so much potential.
Which immediately produced a meme: 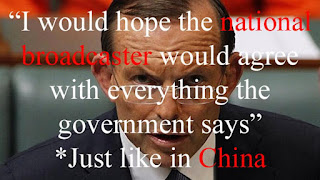 It brought to mind the pitiful sight of a plaintive figure singing in a high pitched whine:

Besides that, it's a nonsense. Abbott didn't stop the boats, hasn't stopped the boats. The boats headed to Europe, and now a goodly sprinkling of those who made it to Europe by boat - or by plane or by train or bike or by foot - will now make it to Australia.

Naturally the sycophants and forelock tugging reptiles were out in voice, nodding vigorously, little noddies to camera, vigorously agreeing with the poo-bah:

Well you'd expect it of the bouffant one and the bromancer, but the pond wants to reserve a little of the acid for one Tony Wright.

Actually Mr Wright, this little cynic was as busy as a beaver.

Let's look at that number for starters. It was always going to be arbitrary and a token gesture, so how did 12,000 land out of the ether?

Of course a more generous lay-by model could have been followed. 10,000 now, and once they've been helped out, another 10,000 by Christmas, but that would have been the worst of all worlds, Labor followed by the greenies ...

And Mr Wright wonders why the pond is inclined to cynicism, since we're not talking here about the crockery the pond used to sell, but human lives ...

And then there was the delay in coming to any figure at all ... and for this the pond turns to that regular imbiber of kool-aid, Jack the Insider, as he remembered that good government was supposed to have begun on the 9th February 2015:

Yet, spring has sprung and we are still waiting for it and the prognosis is not good. There are the footy finals in October so we shouldn’t expect too much then. The Melbourne Cup is in November, so that’s out and before you know it’s Christmas.
Time is running out but Tony Abbott continues to utter confused and confusing messages to the nation that prevent even good announcements enjoying a positive reception.
On the question of Syria refugees, the PM last week provided an equivocal ‘no’.
“We saw yesterday on our screens a very sad, poignant image of children tragically dead at sea in illegal migration,” Mr Abbott told ABC radio. “Thankfully, we have stopped that in Australia because we have stopped the illegal boats.”
On the same day, Agriculture Minister, Barnaby Joyce told The West Australian he was in favour of an increase of Syrian refugees provided it was done through “proper and legitimate channels.”
When advised of Joyce’s comments, the PM replied, “We’re already doing that.”
No-one expected the PM to commit to a specific number at that stage. A considered response based on capacity as well as need was required but the PM was stuck in the politics of triumphalism. Australia had stopped the boats, he said and other governments in Europe had expressed interest in Australia’s refugee policies.
Within twenty four hours, Foreign Minister Julie Bishop didn’t quite stomp on the PM but announced she was moving in a different direction.
“This is a matter under consideration. Australia has taken about 4,500 Syrian refugees in recent times and obviously the humanitarian disaster in the Middle East, including Syria, is unprecedented,” she said. “So Australia will continue to work with other countries to see what possible solutions can be arrived at,” the Foreign Minister said.
Moving forward to today, the government has announced Australia will take 12,000 refugees of the Syrian Civil War in a one off intake.
It is a good announcement and the government deserves credit for it but what brownie points it might have garnered will go up in the smoke of mixed messaging.
Looking back on the last week, it is obvious that not only did the PM fail to understand the mood of the nation but that he failed to comprehend the wishes of his own parliamentary colleagues.
At its essence this tells us the government sits in a leadership vacuum where the PM says one thing, his party and cabinet colleagues say another and ultimately a conclusion is arrived at within a week or two which more often than not means publicly dragging the PM away from his original position and to that of the majority of his party.

Jack then went on to brood about Bishop all over again, and the upcoming Canning, but it reminded pond above all of John Howard.

The pond never thought it would be writing in praise of Howard, but after the Port Arthur massacre, Howard allowed a grieving period, then 12 days later announced a policy and took the nation with him in relation to gun laws.

Abbott's response, by way of contrast, is always hesitant, and negative. By default, his first move is to what Jack described as the equivocal 'no', when it's not the full-blown, natteringly negative, absolute 'NO'.

And then, through a tortured process of public negotiation with ministers and backbenchers, Abbott is walked back from his original 'nope, nope, nope', to arrive at a different policy.

And so to the reptile of the day, and thanks to the HUNsters, it's the Bolter, who offers some scintillating insights, up there with Cory's teeth: 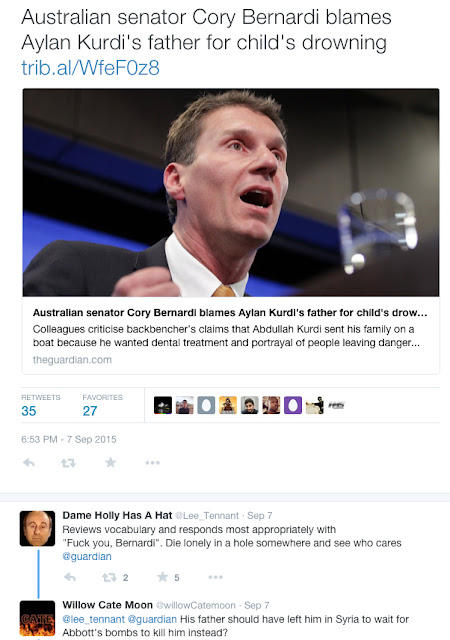 The pond only runs twitter notes because it irritates the reptiles so.

Now back to the Bolter, and the Daily Terrorists thinking that punters should fork out a fee so that the rag's recycled Melburnian distiller of essence of paranoia, fear and loathing should be rewarded for his efforts to spread hate in the land: 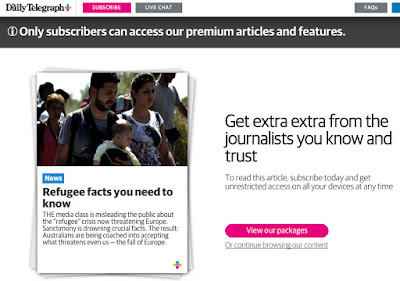 Hang on, Terrorists, hang on. That Melbourne blow-in Bolter's a premium feature?

The Bolter is a journalist the pond knows and trusts and so offers extra extra? By the way, just what the fuck is extra extra?

Are we talking premium grade kool-aid? And now can we read on? 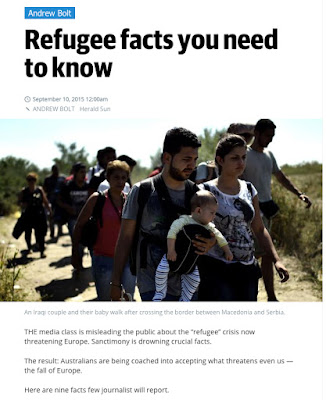 And now you're presenting the Bolter and facts, as good an oxymoron as the pond's ever come across, if ever the pond understand the meaning of the word ...

But do go on. Let's examine the "facts" as a bigot might understand them: 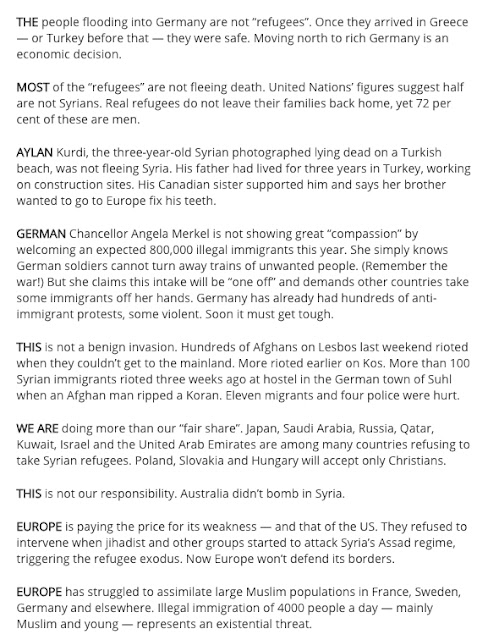 And there you go Mr Wright, that's why the pond maintains its cynicism.

If you believe the Bolter, and Cory's teeth, Tony Abbott has opened his heart and his arms to economic refugees. He hasn't stopped the boats, he's letting in an existential threat ...

Others can pick a fight with the Bolter if they like - the pond was too overwhelmed by nausea to bother.

But one line did get the pond going: This is not our responsibility. Australia didn't bomb Syria. 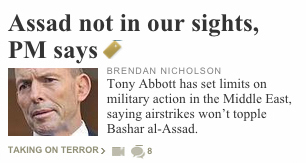 Yes, it's an evil regime, but there's levels of evil, and besides, al-Assad is backed by the wretched Putin, and so the western powers will fight by proxy, muddying the waters, and poor Syrians are caught in the middle, and left in their hour of need to contemplate the magnanimity and generosity of the Bolter and Cory and their teeth ...

Why is it that the pond suspects the Bolter and Cory would have been on the last ship out of Singapore or the last train out of Darwin?

Never mind, it's about time for a Pope cartoon, featuring the mad bomber and an honoured spot for the pathetic, pandering, lick-spittle, fellow traveling Billista, and more excellent Pope here: 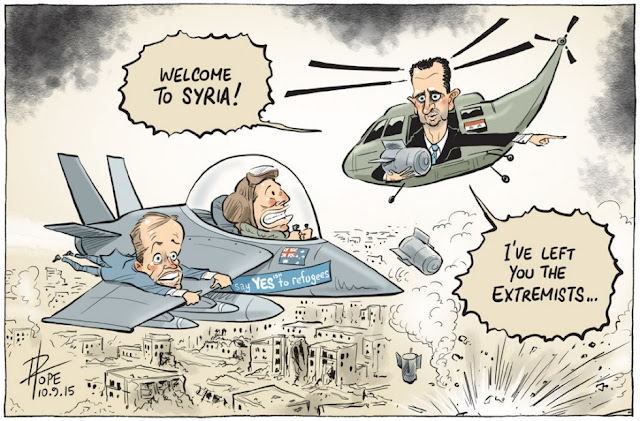