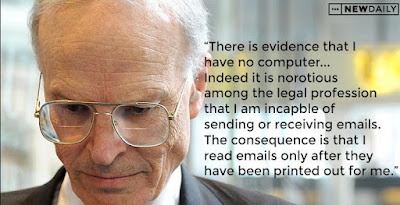 It was an almost perfect summation of the pond's understanding of the Abbott government ... a gang of luddites in search of the snark ...

And indeed the leading of it is a matter of almost inexplicable notoriety, up there with other eccentricities, such asTourette's syndrome or the many peculiar brain conditions considered by the sadly departed but wholly admirable Oliver Sacks. 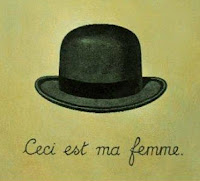 Henceforth the pond will not just apprehend folly and bias, but lackeys scurrying about helping out a man lost to the twenty first century.

It reminded the pond of a delightful NBN information site supplied by a reader.

Relax, it's a shaggy dog joke site, but if you're paranoid, type in any gibberish and the joke will still play out ... and make sure you check out the FAQs ...

Meanwhile, the fear of the intertubes and all its fangled aspects continues to disturb the reptiles this morning.

Thank the long absent lord we have a judge totally removed from the century at work in his fountain pen loft. Scrub that, a fountain pen is pretty advanced technology:

As for the apprehended folly and bias, Dame Groan was in fine form this morning ... Kathy Jackson? Except, except, didn't Jackson get treated with feathers in the Royal Commission?

Back in December 2014: Failure to deal with Kathy Jackson undermines credibility of Royal Commission.

What do you do when your star witness in a politically motivated inquiry turns out to be an alleged thief who may have stolen more than $1 million? Just ignore it.
The credibility of the Royal Commission into trade union governance and corruption should suffer a serious blow from its glaring omissions on the allegedly corrupt behaviour of Kathy Jackson and how it has treated her throughout these hearings.
The inquiry has always appeared politically motivated but the question was, despite this, was it a worthwhile process to root out corruption in the union movement and lead to a well-needed overhaul of questionable governance practices around slush funds and the like. The jury has been out on that.
Yet the 1817-page interim report by Commissioner Dyson Heydon dealt with a range of issues both serious and trivial but ignored Jackson.
There was an oblique reference, without naming her, that other issues to do with the Health Services Union would be dealt with in a future report...

...Jackson was always the commission's star witness and treated far too gently when she first appeared in June. That only started to change when the evidence mounted against her.
How seriously can the rest of the recommendations of this interim report be treated when this commission is prepared to ignore such serious allegations against a friendly witness?

And so on. And now Dame Groan re-writes history in the usual way.

Joking aside, was it in fact the case that the HSU proceeded with the case, despite not being guaranteed a return of funds? Where were the biased learned judge and his entourage - yes, m'lud, the pond apprehends bias as a reasonably rational person - and the coppers then?

And in what alternative universe does Dame Groan live ... to claim credit for Turcman and the RC for a scalp delivered by others...?

Yes, didn't Pope deliver a ripper this morning, combining several themes in a glorious cartoon, though we had to overlook his registered trademark symbol  (and more Pope here): 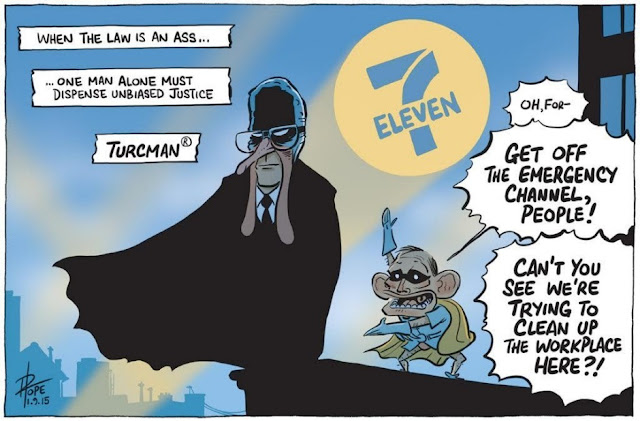 Yes, the pond watched the Four Corners' episode last night, and you can here, and it confirmed every expectation the pond had of the Americanisation of the workplace, so busily being brought about, and so diligently, by the facilitators in the government and the Murdoch empire ...

This day of course there'll be none of any of that sort of idle chatter or nonsense in the Murdochian press, because they're all busy celebrating Heydon's decision or scribbling furiously in support of it. But one paper took notice: 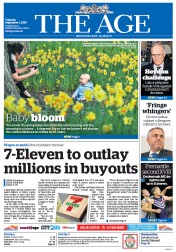 Enough already, for today is Caterist day,  but the pond only wants to point out a standard bit of dullard Caterist bemusement for one purpose ... 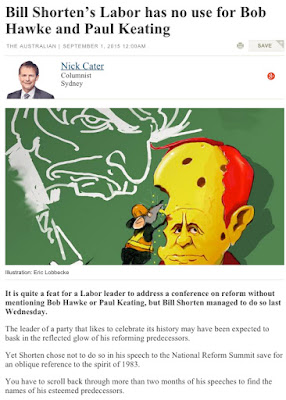 There's a lot more of course, some of it featuring the Caterists' bestest new buddy, feather duster Craig Emerson, brooding about China and the new world of the Billistas:

...What would a former Labor trade minister such as Craig Emerson have made of that? Those hours sipping jasmine tea with his Chinese counterpart Chen Deming were wasted apparently because the economy had already been opened.
When Emerson addressed the National Press Club in 2012, Labor had been pursuing a free trade deal with China for five years, despite the xenophobic rumblings of its union bosses and the fears of others in the community.
“I will not seek to play on their anxieties for political gain,” said Emerson. He would not threaten the Australia-China relationship and Australian livelihoods “in ­exchange for a few votes”. “Why would we want to withdraw from the world to buy and sell to ourselves, a return to the failed Fortress Australia strategy?”
Hawke, Emerson’s former boss, made the same point last Friday in an interview published in The Australian. “The party must not go backwards on this issue — the party and the trade union movement. Talk of opposing it is just absolutely against Australia’s best interests.”

And so on and tediously on, borrowing ideas and regurgitating them:

It is hard, if not impossible, for Labor governments to resist demands for new spending without damaging its brand as the party of compassion. As for trimming government spending, forget it. Economist Oliver Hartwich paints a graphic picture of where this kind of appeasement leads in an extract from an essay, “Why Europe Failed”, that appeared in The Weekend Australian. For decades, European political elites have sought to buy peace with the electorate with “an all-encompassing insurance and entertainment scheme”.
“To their subservient citizens, the European elites provide free or heavily subsidised education, healthcare, TV and radio programs, roads, income support and pensions, public transport, libraries, opera houses, and theatres,” writes Hartwich. “Unfortunately, it is often overlooked that government can bribe the people only with their own money.”
The 2008 financial crisis forced recognition that this strategy was fast driving Europe broke. Yet Labor seems set to follow the same path. Consolidated government spending since 2008 in Australia rose faster under Labor than it did in Europe. It is now close to 38 per cent of gross domestic product, 2.5 per cent higher than it was before the crisis.
A party that aspires to govern in the national interest would seize opportunities to expand trade and increase competition, the approach pursued by the Hawke and Keating administrations 30 years ago. That, however, would require the party to confront its rent-seeking base. It is struggling to find the courage to do so.

Yes, it's just the usual borrowed and blue recycled Carterist nonsense, no doubt designed to cower workers into loving their jobs at 7-Eleven, but here's the rub, because there's always a rub.

This very day Peter Costello scribbled a piece for the Murdochians which might be titled Peter Costello's Liberals have no use for the follies of the Caterists (and Craig Emerson too).

Costello went at the pair and their summit with some vigour:

You can measure the power of an event by the way it captures and holds public attention. In our throwaway world we’re used to discarding information quickly. The most shallow form of communication yet invented, Twitter, lasts no longer than 140 characters. Snapchat disappears once you’ve finished looking at it.
People naturally focus on lasting things that really affect them or the world around them. Events of real significance generate interest and attention for weeks, months, sometimes years.
Which is why I wanted to say something about the National Reform Summit. It is fading faster than the curtains of a Queensland house under daylight saving. Although it happened less than a week ago, already it seems to have disappeared from public discussion. So allow me to recap. Craig Emerson, Labor’s former trade minister and Nick Cater of the Liberal’s Menzies Centre got two major national newspapers to sponsor a conference with the aim of “kick-starting” a national reform agenda. The conveners decided the guest list. It excluded publicly-elected representatives. Those attending consisted of paid staff at the business, union and welfare lobbies, representatives of the “think-tanks”, some individual business and union people and officials from the industry groups.
Like the 20-20 Summit it was designed to bring together the “best and the brightest” — only this time it was the top 100 rather than the top 1000 who sneaked into Kevin Rudd’s talkfest.
Emerson helpfully drafted a concluding statement in advance which changed little as a result of the discussion. As statements go it is well written. As is the case with communiqués, it is long on sentiment and short on detail. As you would expect, since two newspapers sponsored the conference, the media gave it full and positive coverage. What did we learn?
The first thing I learned was that the parliament isn’t so bad after all.
The conference was called out of frustration with our political leaders and MPs. It was designed to show how much progress we could make if we got them out of the way and had a better type of person grappling with the issues in their stead.
But there were no memorable speeches. No one showed any danger of inspiring the conference, let alone the public.
We didn’t hear one new idea...

Costello went on to rubbish the old ideas, and the newspapers and their enthusiasms and quaint terms like "mud maps" used at the summit (presented, the pond suggests, by a "thought leader"), and otherwise mocking the participants.

Costello even played fairer than the pond by failing to note that the Menzies Centre received a handsome swag of taxpayer money to facilitate its jibber jabber ... the sort of subsidy cynics might think indicates some kind of market failure ...

It was glorious stuff, and all the more piquant because it was Costello doing it rather than the pond, and so the pond didn't have to do a thing, except cut and paste and chortle ...

And finally, speaking of transience, the pond was entranced by a few stories that rubbed cheek by jowl in the reptile press yesterday ... 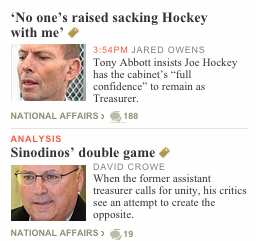 No one's raised jolly Joe's sacking with him?

He really is the bubble boy from that Seinfeld episode. And Arthur's a spiv from an episode of Minder?

Well that idea about jolly Joe, joined at the hip with Abbott, might creep back underground, but it's not going away, and the can kicked down the road to Canning is still there, and getting closer by the day, and happily, all this hoo hah does help explain Rowe's splendid cartoon this morning (and more Rowe here). 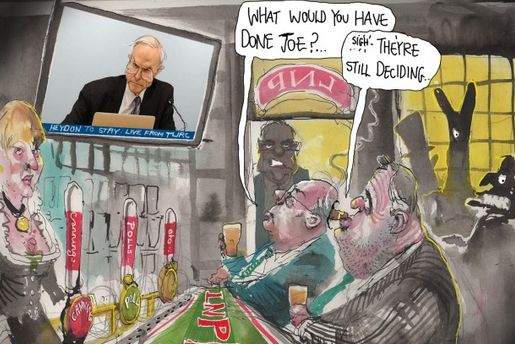