Before we begin the journey with the holder of the precious, a little time please with the bromancer and the Oz editorialist celebrating a career of grand service and achievement ... 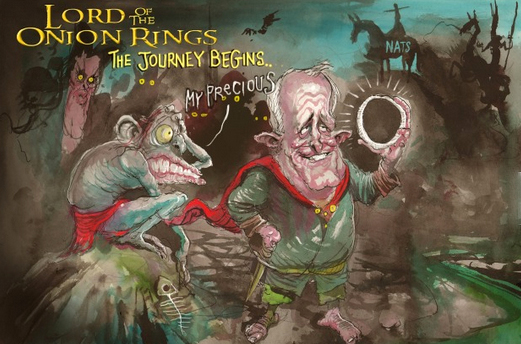 Let the journey, and the morning, begin with a Rowe cartoon, and yes, there's a grand Rowe gallery here - if you missed his Via Dolorosa, you missed a wondrous spectacle, and for a time you'll find second cartoon down at the link.

It's been a boom time for the pond, the beginning of this journey. Hits are up, oops sorry SEOs, page views or impressions or passing traffic on a Mike Baird motorway ... but the pond is exceptionally modest, in the way that big Mal is modest. You know, ever so humble and grateful, and not a hint of a gigantic ego or glorious self-regard.

Yes, all credit is due to the majestic reptiles who make up these pages. The pond has often noted that in zoos the reptile world is always immensely popular. The snakes, the lizards, what's not to like, especially when it's time to feed the reptiles a rat or two ...

This day, while some are still in mourning, other reptiles are excited by the smell of rat ... 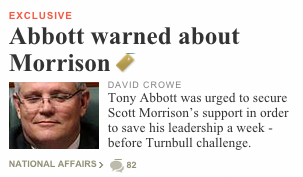 Others have been digging through the archives to help make the start of the journey more interesting and amusing: 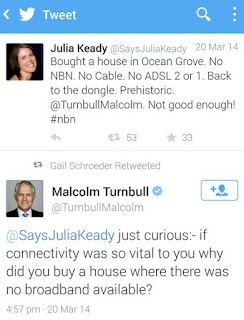 Such empathy, and it makes it easier for the pond to confess to being empathetic towards the still suffering, brooding and mourning reptiles.

You see, now that the assassination is done, it's time for the burnishing and the restoration and the hagiographies.

We've seen it before in China - first the power, then off to the camps to scrub wooden floors with a toothbrush, and then a return to glory.

These days the reptiles like to shorten the steps - a little time spent serving the good citizens of Warringah in a back bench capacity is more than enough dutiful service - and then can come the perks, clustering around the Captain like he's a reincarnation of Bomber Beazley.

A weird thought, you think?

Amongst the most admirable of the reptiles is the inestimable Greg Sheridan, who when put on display on these pages, always attracts many positive comments, and what a prolific reptile he's been of late, as all his powers of a bromancer whisperer have been put to the test:

Ah, you can see why the pond was immediately attracted. Rare nobility! 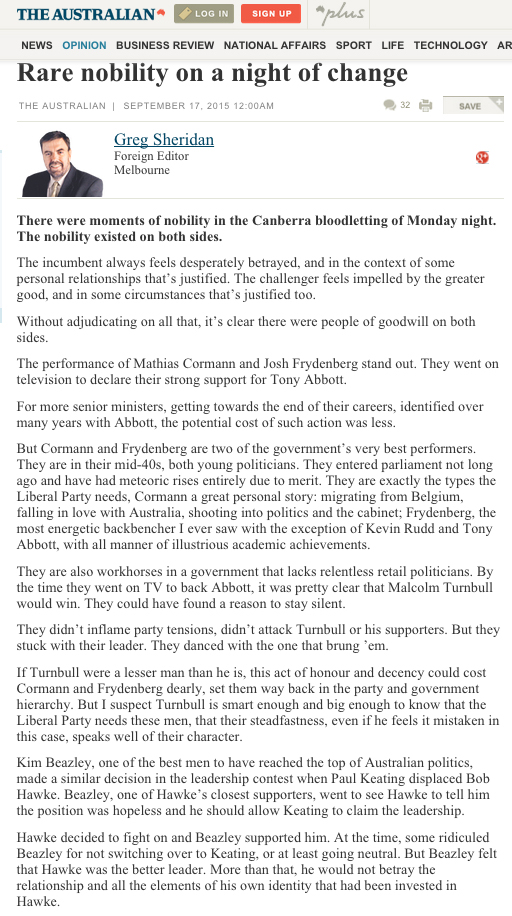 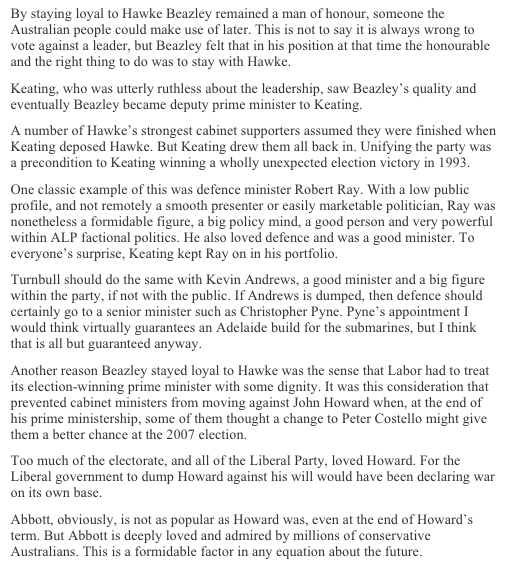 There, that's the moment all those who stop at Sheridan's reptile cage just love. The importance of not dumping Howard and so copping a hiding at the election. The blinding insight that Abbott isn't as popular as Howard, but is deeply loved and admired by millions of conservative Australians, a formidable factor when it comes to awarding him his just and due junkets and trinkets ...

And before that, dear sweet long lost lord, he's invoking Paul Keating and Robert Ray and Hawkie and more of the Bomber. Is this a cue for Abbott to turn up as Australian Ambassador to the House of Rupert in New York?

Is this what that  meme doing the rounds means? 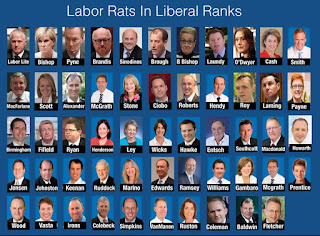 Oh Bronnie, Bronnie, not you, not the noble figure who produced your love child thanks to John Howard. Why it's a tragedy worthy of an ancient Greek ...

And speaking of rats, what was that figure lurking in the background? 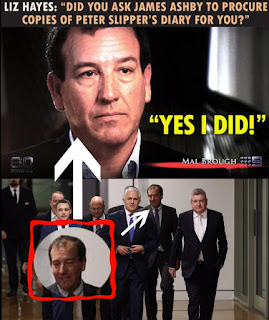 Sorry, as often happens when paused at the reptile enclosure, and the playful bromancer scampers about, the pond wanders away into a dreaming of dinosaurs, but let us return for the sweet finish to the hagiography: 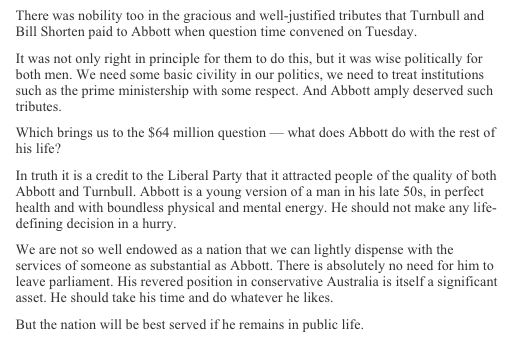 The nation will be best served if he remains in public life ... yep that job of Ambassador to the court of Emperor Rupert is looking good ... and the pond could hear the onion farmers around this great land shout out with joy and relief ... for never has the humble allium cepa been so mocked and hung out to dry in recent days all over the land ...

Ah, sweet memories, and hasn't politics worked out for this excellent trio ... 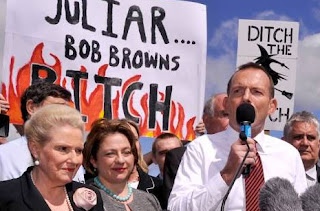 Though there have been consequences ...

But wait, there's more because this very day the Oz editorialist has also taken on the duties of a hagiographical obituarist ...

What a grand balance. A hopeless and useless tool, but a wonderful benefit to his party and the nation.

Is there a better example of schizophrenia available in your house Dr Freud?

Naturally the pond was entranced, though only the sternest and hardiest of passing readers could handle a double dose of the kool aid in one sitting: 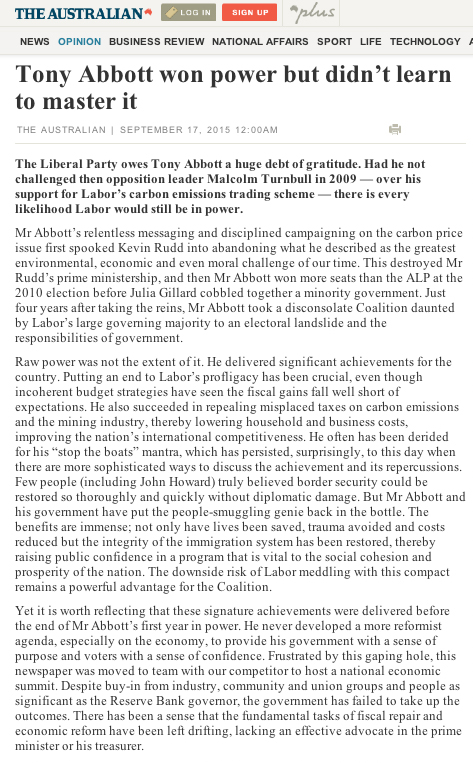 Oh dear, that's drifting into alarming territory. You know, as October looms, and the coach begins blaming the team for not listening to him (or her, though the pond is putting short odds on a him of an obvious kind).

Never mind, he might not have listened to his reptile coaches, but he's a champeen, a could have been, would have been, should have been winner, and we should all be grateful for the two years of comedy stylings, bumblings and half-arsed carry ons it's been our shared privilege to observe ... 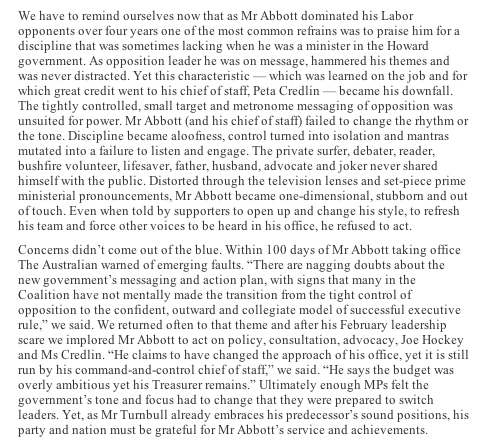 Yep, it's not just the bromancer that can deliver the zingers. How about that wondrous "Distorted through the television lenses and set-piece prime ministerial pronouncements, Mr Abbott became one-dimensional, stubborn and out of touch."

Apparently it had nothing to do with Mr Abbott being a one-dimensional nattering naysayer of three word slogans and nope, nope, nope and no, and being ineffably stubborn and a medievalist Prince Philip worshipper woefully out of touch with climate science and the joys of fibre over copper ...

And so hagiography done and dusted, and the nation profoundly grateful to the reptiles for reminding the nation how it must be grateful for Mr Abbott's astonishing service and achievements, we look forward to the next stage of the journey. Mr Abbott despatched to the court of King Rupert, and Malware trying to reconcile all his past positions with his present ones ...

And where better to begin that journey than with a Pope cartoon, and more excellent Pope here: 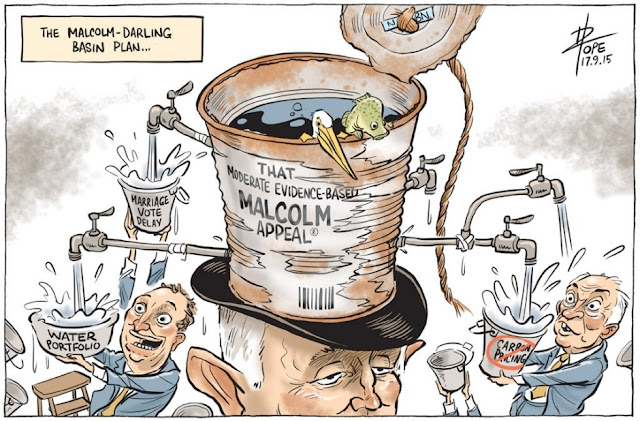