A super duper edition of moaning, misery, rats in the ranks and a heap of goanna salve for the fretting reptiles ...

The pond feels ashamed, soiled. Fancy spending quality time, like a shameless, shameful slut, with the barking mad Exspectatorists, and forsaking the beloved reptiles of Oz.

But the pond's brief sojourn with the Exspectatorists was profitable because it raised the question of what happens to reptiles driven mad by loyalty to a lost cause for some five years. That's a long time to waste, in reptile or even 'uman years ...

Right now there's so much grieving, and still the need for a keening and a wailing and sackcloth and ashes ... 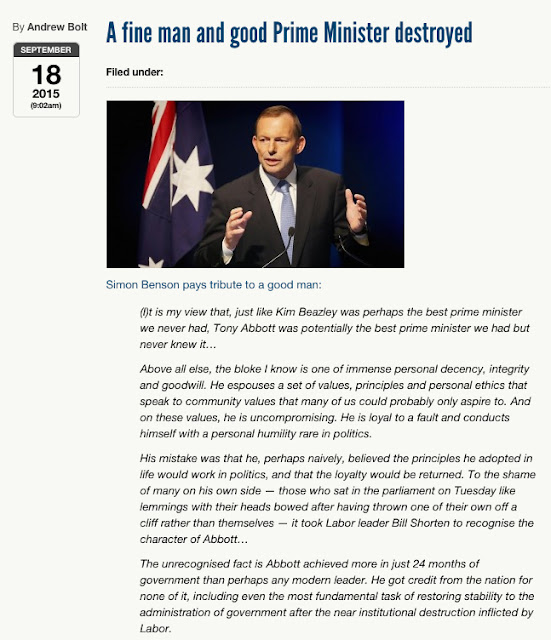 And so on and on, and what a wondrous restoration of stability, as the man with a direct line to the office speaks bravely of his loss, and speaking of loyalty, this just in ...

Oh dear, better start packing a bible for when you read Scott Morrison concedes Tony Abbott offered him treasury ... (with forced video and Ray Hadley and if that doesn't stop you from clicking nothing will).

Oh, there are rats in the ranks, there's a need for healing, there's a need to send a submarine to Adelaide to save the poodle or at least take him to China, and yet there are already signs of a nameless fear, some dread spectre of horror hanging over the reptile heads.

Already the poor reptiles clustered in their enclosure are nervous. There are signs and portents and rumblings, and not just from the twitterati with their usual wittering insights: 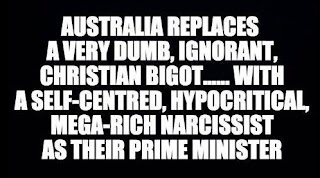 Now that might be well be exact, just, and true, but the reptiles are already feeling the fear.

Down from their kool-aid high, sustained over two years, the nerves are beginning to show, with only a couple of days on the new Malware, copper-burnished clock:

Tony Abbott has pledged not to “white ant” Malcolm Turnbull but some “massively angry” follower­s seem prepared to provide the sort of cabinet leaks used to destabilise the former prime minister…
Canberra­ insider gossip is emerging about the early workings of the Turnbull government contradicting the Prime Minister’s promise of a new regime.
Innocuous details of the first cabinet meeting of the Turnbull government on Tuesday are emerging; cabinet figures contradicting Mr Turnbull’s claims about promoting women have been leaked; some of Mr Abbott’s supporters have had meetings; and Liberals are complaining they were kept in the dark over the Coalition agreement Mr Turnbull signed with Nation­als leader, Warren Truss.
The Australian has been told the Prime Minister’s first cabinet meeting lacked the expected inclusiveness after Mr Turnbull’s promise to restore proper cabinet processes and to be “collegiate and collaborative"…
Environment Minister Greg Hunt, famed for his graphic present­ations and multi-pointed arguments, suggested Mr Turnbull take some comments from those around the cabinet table.
Mr Turnbull listened to the minister’s first point but closed discussion before he got to points two and three. He did not seek further comments from around the table and called in the outer ministry members.
Mr Turnbull then addressed the full ministry and called for any questions. There were none and the meeting ended.

Fancy not listening to that elaborate presentation of evidence of walri in the Antarctic!

And then there are strange sightings in the sky, as weird as seeing the image of Jesus in a cheese toastie: 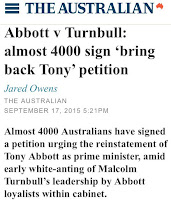 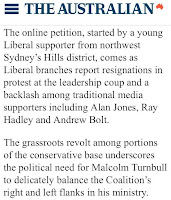 Yes, and now we know the faceless men involved in the filthy blood-letting coup, thanks to the AFR: 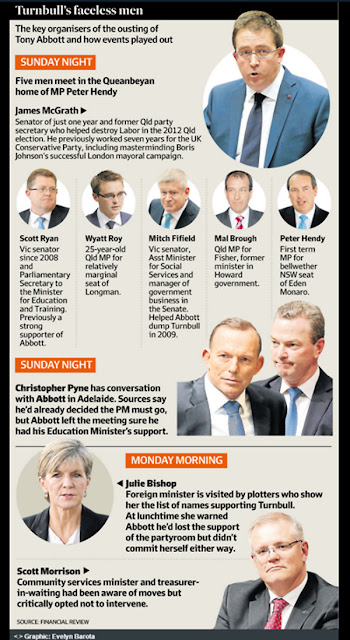 Damn you faceless men, damn you all to hell, but Julie Bishop is a faceless man?

So it seems, though it might take some mansplaining away ...

Meanwhile back with the Bolter, the lad with a hint of Latham in him is maintaining the rage at the vicious harridan, though in only a surly, truculent way: 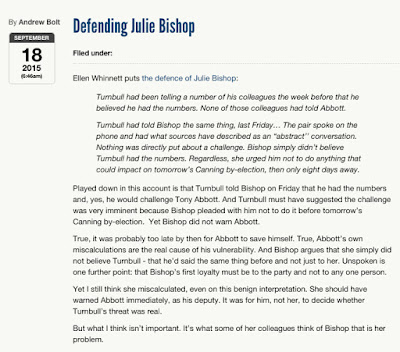 And then there's the treacherous, traitorous poodle, the Benedict Arnold of Adelaide: 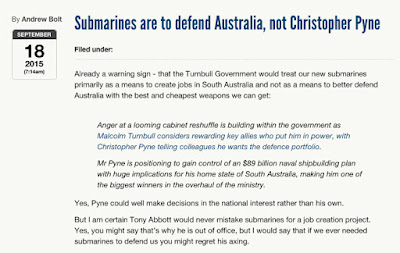 And all for what? Sackcloth and a few poll ashes. Piffle, tawdry gemstones of the lowest quality: 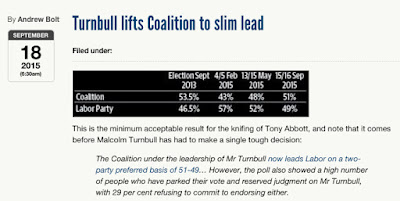 In such dire moments, the pond always turns to its first true love, the thoughts of the Oz editorialist, a manly man when only a faceless man should be allowed to chatter: 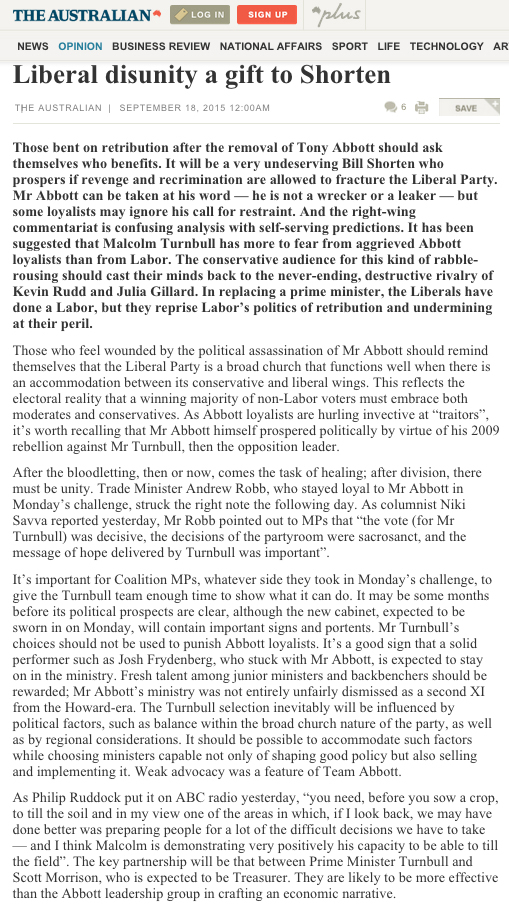 Ah, the healing in the healing days ahead ... a time of love and peace and harmony that will make Haight Ashbury a distant memory ... and it's going so well already ... a rats' feast of poison, hate and bile ... thanks to the ratbag tea party Murdochians so assiduously cultivated over recent years ...

Can the pond humbly suggest a magic lotion, much loved by the pond's relatives up Tamworth way for many a year? 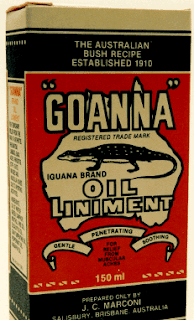 Won't someone think of the goannas?

Now do go on, Oz editorialist, let's have a helpful healing session. Can we feature the poodle and detective Plod? 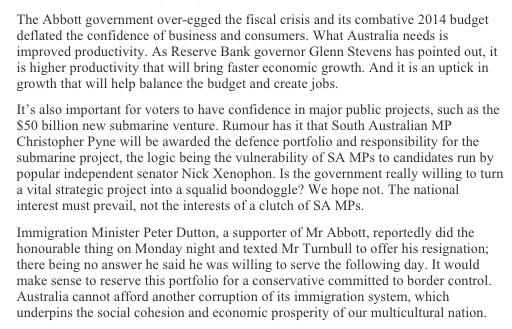 Ah, excellent, stop the boats and stop the submarines ...

The bouffant one was also in splendid, hand-wringing, form about the subs: 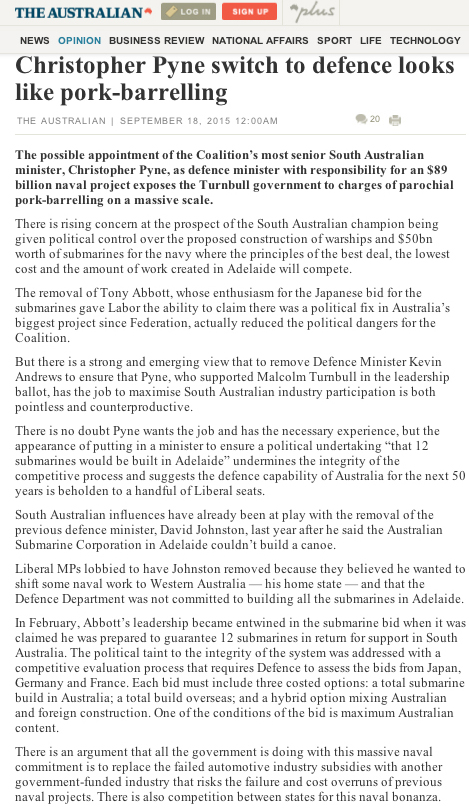 Won't someone think of Kev? Damn you, poodle perfecting the art of pork barrelling to save your pathetic poodle skin!

This cannot stand, this will not be allowed! 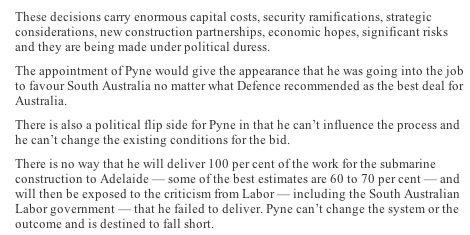 But think of the upside! There might be something to salvage by way of higher education.

Never mind, it seems that Malware is already destined to failure, but once it's installed - please don't click on that request to download a video player - it's a devil to get rid of it.

And here we are already, the bouffant one and the Bolter in perfect agreement, and oh dear what a rocky road it's going to be, if you spend your time reading the runes, and watch the reptiles fossick around amongst the entrails ... 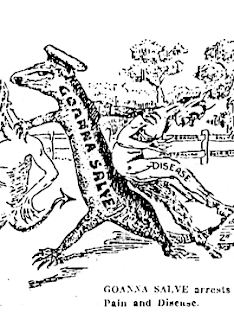 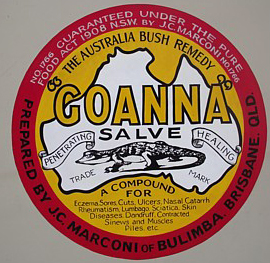 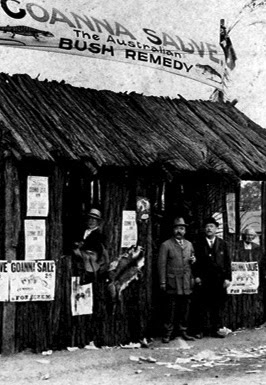 Oh look, and an early portrait of the goanna salve factory. Why it perfectly evokes the spirit of the Abbott-loving bunkerists now in search of a new hope, a new dream, or even a blanket ... 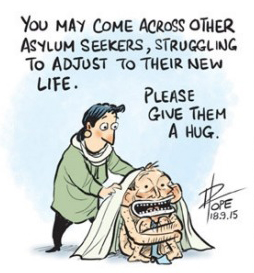 Now if we're all feeling a tad better, please stand by for Moir's splendid vision of the future: 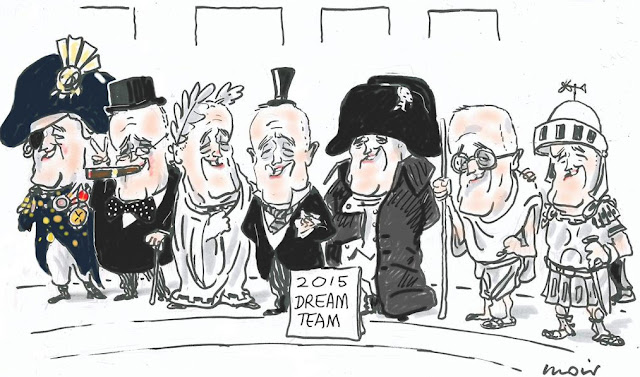 Uh oh? What's that you say?

Oh yes, oh please, oh pretty please, oh please do ... it'll be hard to match this week's events, but surely it can get even funnier than this ..