In which the pond gets distracted by biblical incidents, instead of focussing on leakers dripping into the lizard Oz and Mike Baird's plans to turn Sydney into LA ... 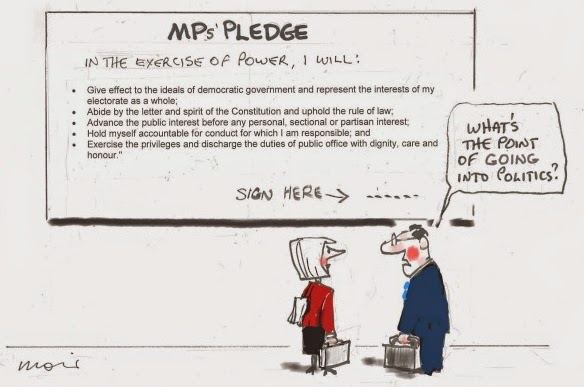 (Above: Moir mocks one of the stupider Fairfax initiatives, up there with the futile gesture of Earth Hour, which substitutes candle rhetoric for a night as more useful than ongoing community wide action. More Moir here at Fairfax, where at least the cartoonists have a modicum of sense).

This just in from the PM, in an amazing pond EXCLUSIVE:

"What we can’t do is endlessly subsidise lifestyle choices if those lifestyle choices are not conducive to the kind of full participation in Australian society that everyone should have," Mr Abbott told someone, who told the pond.
"It is not the job of the taxpayer to subsidise lifestyle choices. It is the job of the taxpayer to provide reasonable services in a reasonable way."
Mr Abbott said that, in remote cyclone-afflicted communities, the cost of rebuilding communities  ­services such as schooling, power and infrastructure - had made closing the gap between sensible Australians and danger-loving Australians more difficult to achieve.
"If people choose to live right in the path of a cyclone, if people choose to experience high winds, if people choose to live where their crops are going to cop a pounding, ­obviously it’s very, very difficult to close the gap," he said. "Fine, by all means live in a ­remote cyclone-afflicted location, but there’s a limit to what you can expect the state to do for you if you want to live there."
"This is where we have to be a little bit realistic," he said. "If you or I chose to live in a very remote dangerous place, to what extent is the taxpayer obliged to subsidise your services?"
Mr Abbott pointedly noted that there was absolutely no reason to offer any aid whatsoever to any Australian community or any other country that made this kind of lifestyle choice.
Mr Turnbull said attempts to paint Mr Abbott as insensitive to cyclone-afflicted Australians and those suffering in other countries was a bridge too far.
It was important the issue be discussed thoughtfully and rationally, he said. "Rather than — as is often the case with the prime minister — that whenever he opens his mouth his critics swoop on him like a pack of forwards onto a bit of loose balls," Mr Turnbull said.
"The suggestion that Tony Abbott is somehow or other insensitive to the situation of cyclone-afflicted communities. I don’t think there is any cyclone-afflicted member of the Parliament that has more involvement with, or more understanding of, cyclone-afflicted communities than Tony. Why on a daily basis he looks as if a cyclone has battered him and forced his foot into his mouth, such are the strength of the gale-force winds that buffet him".
"The only point … we should be focused on is just the recognition that obviously in smaller more remote cyclone-afflicted communities, there is vastly more expense involved and there are consequently less opportunities. Why should we subsidise these danger-seeking loons and help them rebuild, if it's only so they can get blown away by another cyclone? There is a fair issue there to be discussed but regrettably, people always want to turn it into a flaming match. Cyclone-afflicted people, for some reason, having made their very bad lifestyle choice, tend to be volatile and hostile."
"It’s important to put that issue on the table, talk about it rationally without turning it into a let’s-give-Tony-Abbott-a-belting occasion, as often these ratbags like to do".
Treasurer Joe Hockey said Mr Abbott was “absolutely right” because you could not raise an expectation that the quality of opportunity was available in every part of Australia, and especially in cyclone-afflicted communities."Some of them say it’s part of their tradition, that is their lifestyle, that is the way they live," he told ABC radio, but "really, should we reward them for an act of foolhardy bravado?"
"Wouldn't they be better off living in temperate climate zones, where costs could be contained, and there'd be no need for local welfare or international aid?"
The PM later defended his choice of words and his proposal to slash all aid to local and international cyclone sufferers:
"I was making the pretty obvious point that you or I are free to live where we choose, all Australians are free to live where we choose, but inevitably there are some limits to what we can reasonably expect of the taxpayer when it comes to supporting these choices," he said.
"Now I am absolutely passionate, absolutely passionate and have been for all of my public life, about trying to ensure we do the right thing by those who live in cyclone-afflicted areas."
"I'm very comfortable with my credentials when it comes to doing the right thing by cyclone victims in Australia and abroad," he said, "but there has to be a limit, and this government knows that limit. Zero tolerance, and zero cash out the door." 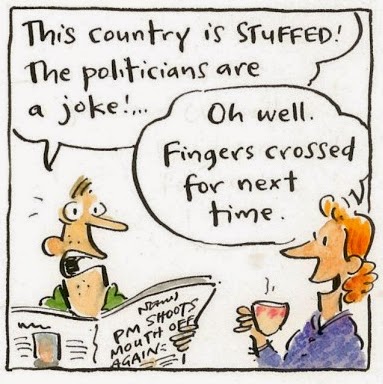 Moving right along, the pond is still catching up on all the leaks that are dripping on the reptiles of Oz, including this one: 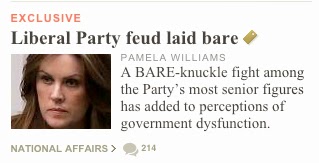 Amongst the many intriguing details, the pond was delighted with this one, most suitable for a meditative Sunday: 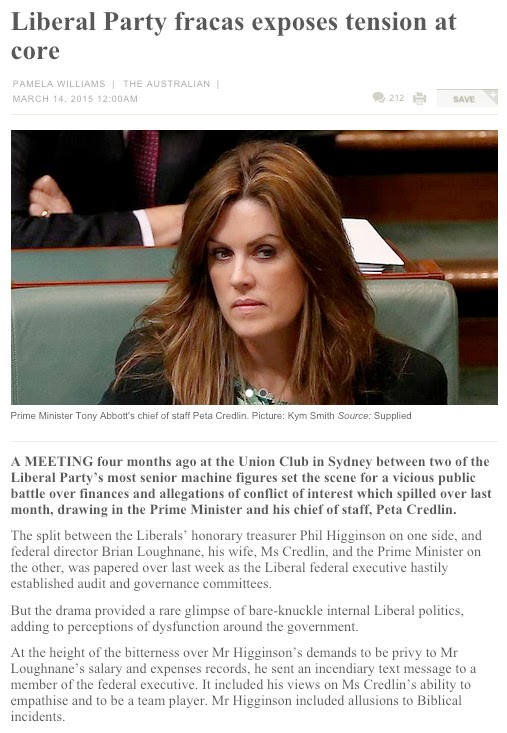 Alas, the text is silent on this crucial matter and so the pond drifted off into a reverie about Cecil B. De Mille's 1949 Samson and Delilah, with Victor Mature and Hedy Lamarr - the pond always thought of Lamarr as a role model: 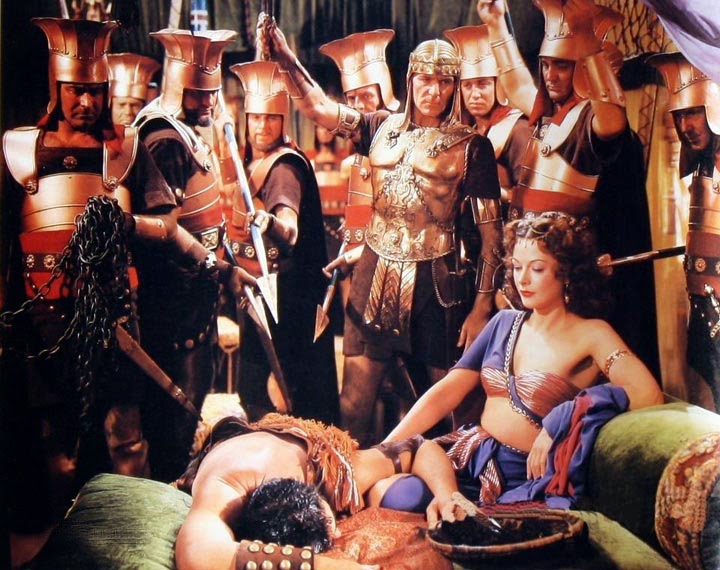 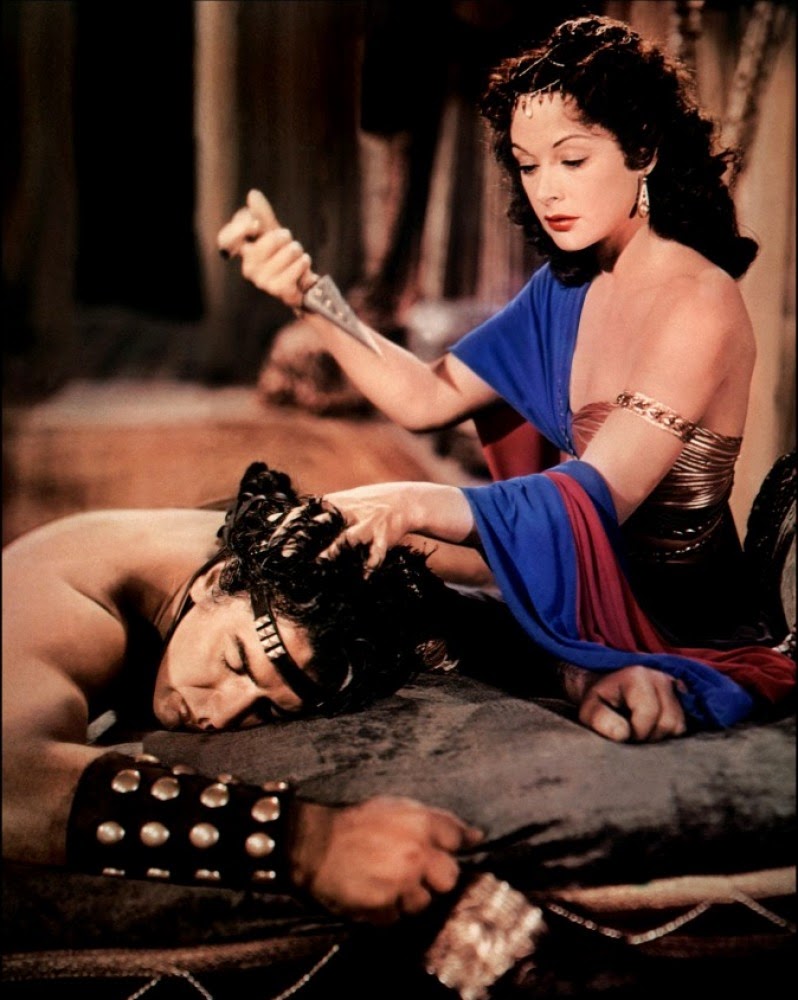 And then there was Frank. Ah Frank, you glorious old ham you: 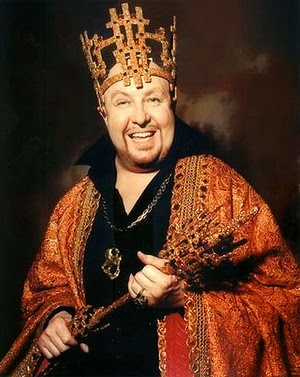 And tonight the pond watches the latest Moses!

Who can forget those wonderful lines uttered by Anne Baxter as Nefertiti in the original Cecil B. DeMille camp classic The Ten Commandments: "Oh, Moses, Moses, you stubborn, splendid, adorable fool!”

What's that you say? The pond has seriously drifted away from the matter at hand, which is yet another skewering of Ms Credlin by the reptiles leaking to the lizards of Oz? Do go on:

Stonewalled? Then let all the hoppy toads hop out, and the devil take the hindmost, eh George?

By golly, you knew how to say farewell in style: 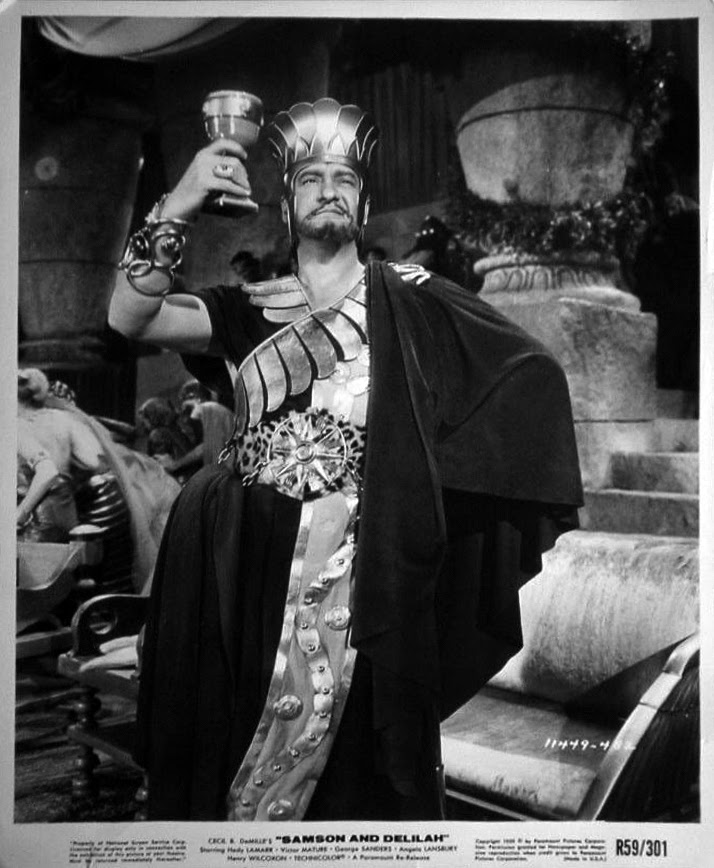 But you were cruel George. Was it just a lifestyle choice for Vic to lose his hair? 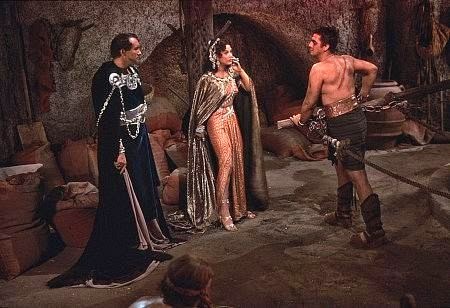 Never mind, it's a meditative Sunday and madness has afflicted the pond. 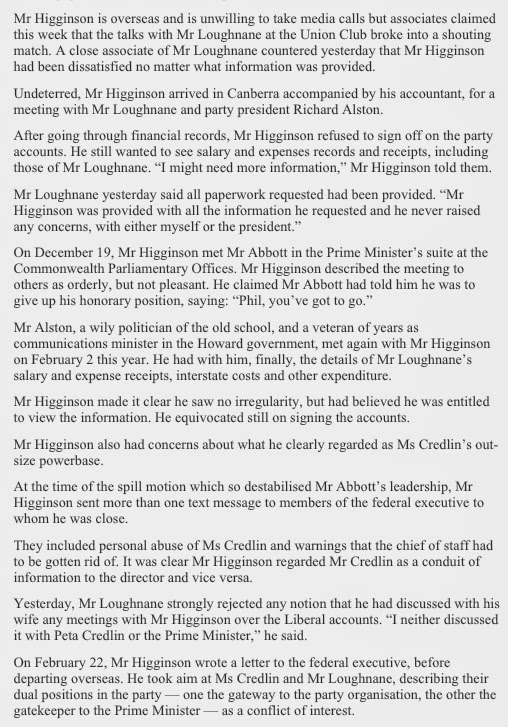 Ah, so that's what it's come to. Associates speaking out of turn and leaking to the reptiles of Oz.

A word of advice Mr Loughnane. Formality doesn't get you off the hook. Why not just say "I didn't discuss it with my wife, the ball and chain, the strife of life, or the boss, the man with the foot in mouth disease".

Not next week, it seems, thank the long absent lord, and so there's a lot more biblical incidents to come.

There's Mike Baird pandering to the petrol heads so that Sydney can take over a massive Melburnian debt, variously estimated at $40-60 million a year, with the notion that the Sydney Harbour Bridge be shut down for a week so that the track can be prepared and the event held to a goggle-eyed world. Well why wouldn't you be google-eyed and bemused at a city shutting down for a week in a way that will ensure complete chaos?

The pond, for a living, used sometimes to invoke multipliers and is aware of the richness of the fraud, but was there ever a more poignant read, than the ABC's Victoria may gloat about poaching the Grand Prix, but SA gained a lot by losing it.

Oh leave it with the Melburnians Mr Baird, they have so little joy in their miserable Brandon Lee, Crow-like black-coated, rain-sodden, coffee-laced existence, why would anyone want to take away the annual battle for Albert Park, and assume such a substantial and useless debt, merely to shovel money down Bernie's litigation-laden pockets?

Then Baird - so desperate is he to win - has made all sorts of other promises to fix the roads in Sydney, in a way which will take Sydney closer to LA.

The hapless goose has been rabbiting on about congestion and pinch points and freeing the traffic so the traffic can run wild and free, when anyone who has spent a moment in LA or Dallas knows that no matter how many clover leafs, freeways and motorways are built, the traffic will still pinch and stick and congest.

What a pity that parochial state politicians rarely get out and about, and see how their bright, out-dated new ideas have already played out in other parts of the world ...

It got so bad that LA finally decided to embrace light rail (When Car-Loving Cities Start to Embrace Light Rail), though the reality in America is that no one knows how to make public transport work, so accustomed are they to the thorough destruction by the oil cartels and motor lobby of long ago used public alternative forms of transport.

No doubt Baird means well, and no doubt he will win the election, but on the matter of promising nirvana on Sydney roads, he is a thoroughly stupid man ...

He might change when he gets back into office, but the pond doubts it. There's little doubt he holds his delusions close, and in good faith ...

It's like Baird telling everyone that the privatisation of electricity will lead to cheaper prices when everyone knows it will lead inexorably to Enron. It wasn't cheap thanks to the public gold plating, and it won't be any cheaper when the private sector gets around to leeching away the gold ...

The pond has to declare an interest, in that Baird's plans will kill off Newtown, currently a trendy place for lovers of hipster beards and tattoos, though there might be an upside.

The pond regularly visits the Newtown post office, which moved to Enmore, though Enmore has its own post office, and it wasn't until Portlandia came along with a portrait of collecting an American parcel that the pond recognised a spiritual link connecting post offices around the world - though the Portlandia post office looks a little more organised than the Enmore outpost.

With Baird ramming a 24 hour clearway through Newtown, at least the upstart new Enmore post office and its legendary queues might become a thing of the past.