A rose is a rose, a tax is a levy, and an Abbott is a MAMIL Gillard, except when he's a Ruddster ... 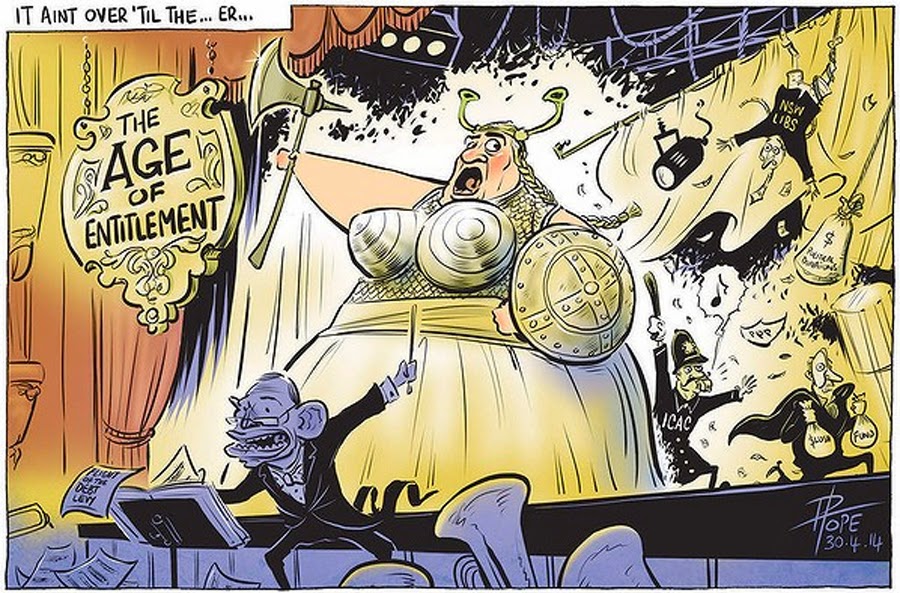 (Above: and as always, more Pope here)

Of course the pond's excited.

The smell of blood in the water can always get a shark going. In fact most days throw in a bit of bread for burley in the water, and you can get the pond thrashing about like a carp at the entrance to the spillway ...

Already the pond has opened a domestic book on the exact date of its termination.

At the moment, the odds are long and the precise month and year fluctuates wildly, but in the end the market will sort it out, as also whether the demise is by the hands of colleagues, or at the hands of the electorate.

Naturally the pond prefers death by the hands of colleagues. There's always something splendid about the sight of a rat casually eradicated in the arras, and the comings and goings of Gillard and the Ruddster were monumental, and in due course, deserving of a musical up there with Keating and Howard.

Most people already knew that Abbott was just another politician, albeit blessed with a certain rat cunning and lycra-clad MAMIL aggression.

But now he stands revealed as just another really stupid politician.

He has, in short, at least from his own inimitable, short-sighted,  three word slogan mantra perspective, done a Gillard.

Now Gillard made a number of mistakes, not least in killing off an emissions trading scheme, then bringing it back in a form which could be labelled a tax. Abbott made her pay. He hung an albatross around her neck, and whether it was fair or not, or a matter of good policy, was never the question. He made her pay ...

How astonishing then to see Abbott, in Gillard mode, stumble about yesterday, embroiled in discussions about whether a levy was a tax, and whether it constituted a broken promise.

Sure, the pond household would be up for the tax nee levy.

But it's not personal, because the pond household could ride out the blow. In much the same way that the pond could handle a carbon tax, while at the same time understanding that the main cost in terms of electricity charges has been to do with infrastructure costs of the wild and woolly kind, and has had three fifths of fuck all to do with  the demonised carbon tax.

But Abbott spent his whole time in opposition demonising taxes and levies, to the point where the pond was heartily sick and tired of hearing about them. That's what happens when you campaign in mindless slogans full of bile and nattering negativity.

Help out with the Queensland flood, even if they're a flock of toads? Sure thing.

What's that? It's an evil levy, sure to break the bank? A filthy new tax? We shouldn't have to stand for it?

The disgraceful Fairfaxian media, which the pond noted yesterday were off with the pixies on what was surely the biggest story of Abbott's premiership, finally caught up today: 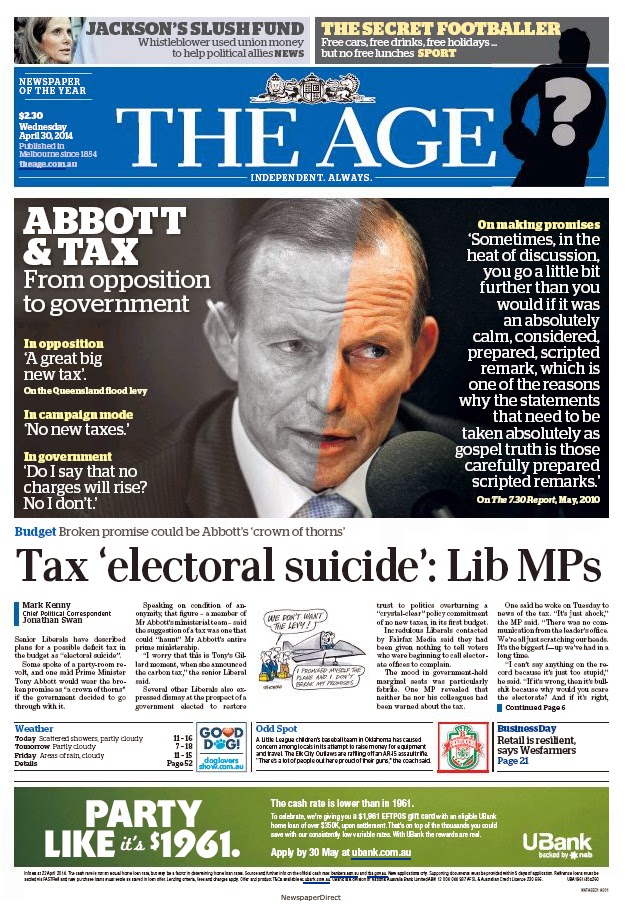 Oh sure at the top of the page the Sydney Fairfaxians were still off in la la click bait land, but down below, even they knew that electoral suicide would lead to party-room revolt: 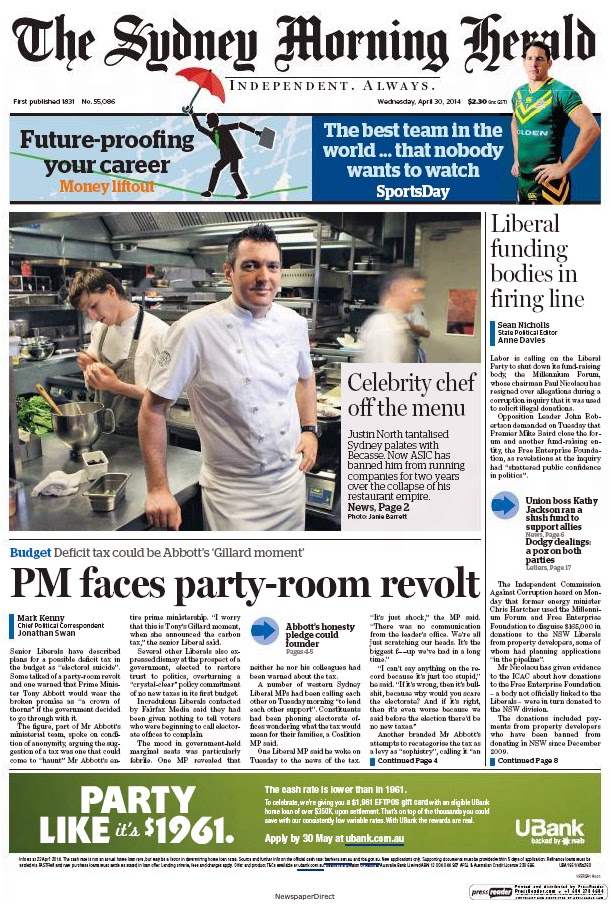 And to be fair, the Fairfaxians had begun to swing along with the pond by last night.

The Age framed it as a credibility issue, while the Sydney granny headed the yarn as electoral suicide:

Even the reptiles at the lizard Oz felt the need to join in, though good old Hedley Thomas was still front and centre demonising Clive Palmer. 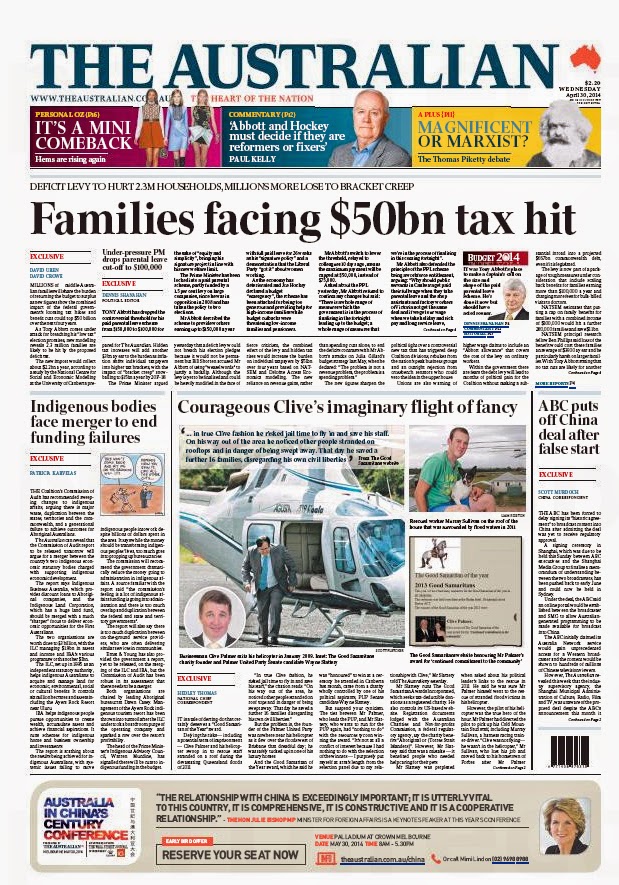 Of course another front page provided an explanation of why Hedley was so agitated: 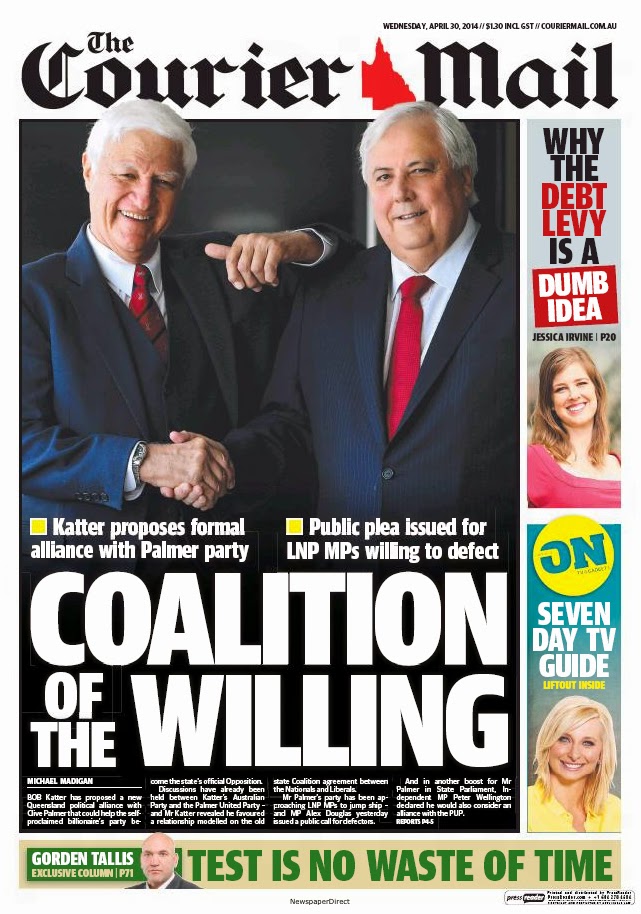 But how is the buffoon getting away with all this? Making so many waves and splashes?

Well it's because the Abbott government smells to high heaven, already, and never mind the shortness of the reign, and so does the Labor party, and yes, mind the Shorten.

Now every pundit in the land, from the IPA to Lenore Taylor, are having a free kick at Abbott's head.

Even that dunderhead the Bolter began to have doubts as to the wisdom of class warfare:

... the only defence Abbott has mounted so far is likely to give comedians lots of material:
I think if there was a permanent increase in taxation that would certainly be inconsistent with the sort of things that were said before the election.
True, this broken promise would be less potent than Gillard’s. Who bleeds for the “rich” - except, of course, some important Liberal supporters and donors?
That’s why I suggested in a post below that a tax rise on the “rich” could still be good politically, given the cuts to come on middle-class welfare and the charges for “free” government services.
But now I’m less sure. Labor and the Greens both suggest they’ll oppose the tax, hoping to make Abbott seem the liar. They would need just two votes of the eight crossbenchers to block the tax in the Senate. And they’d get them: ... (here)

The poor lad was so distressed and disturbed that today he opened with links to Beethoven's Triple Concerto on YouTube, but it's Moscow in 1970, so don't you go fretting about breaches of copyright ...

Was the Bolter inspired by David Pope's Wagnerian portrait of jolly Joe and the wretched Abbott beavering away in the pits?

The kindest solution for Abbott would be to have the levy killed off in the Senate, but even if that happens, it's the process that's signalled the demise of Abbott. It will be an agony if the levy is made policy and passed in the lower house and then wends its way to the upper house to meet its demise.

But even if he kills it off now, he can't call his brazen folly back. Around his neck he himself has hung quite a juicy albatross ...

Even more amazing - and this is where it really gets bizarre - in laying the proposal out, Abbott did a Ruddster:

Incredulous Liberals contacted by Fairfax Media said they had been given nothing to tell voters who were beginning to call electorate offices to complain.
The mood in government-held marginal seats was particularly febrile. One MP revealed that neither he nor his colleagues had been warned about the tax.
A number of western Sydney Liberal MPs had been calling each other on Tuesday morning "to lend each other support".
Constituents had been phoning electorate offices wondering what the tax would mean for their families, a Coalition MP said.
One Liberal MP said he woke on Tuesday morning to the news of the tax.
"It's just shock," the MP said. "There was no communication from the leader's office. We're all just scratching our heads. It's the biggest f----up we've had in a long time."
"I can't say anything on the record because it's just too stupid," he said. "If it's wrong, then it's bulls--t, because why would you scare the electorate? And if it's right, then it's even worse because we said before the election there'd be no new taxes."
Another branded Mr Abbott's attempts to recategorise the tax as a levy as "sophistry", calling it "an offence to voters" that was "worse than Gillard's claim that the carbon tax was not a tax".

Febrile! You give me fever. Worse than Gillard!

And so on and so forth.

No wonder Lenore Taylor flayed away at Abbott here:

It’s not the government’s aim of bringing the budget back to surplus that is the problem. It’s what we are learning about how they might share the pain – the ridiculous semantics of talking about a new tax while pretending it’s not a tax and of pretending they never promised not to raise taxes when they quite clearly did, and the gross insult to voters’ intelligence to think they might not notice.

And no wonder there was this fatal headline by the granny:

Gillard and Abbott, joined at the hip in this way?

Who could have foreseen it? Who could have imagined he was so stupid, arrogant and inept? Even those who disliked Abbott intensely couldn't imagine a complete absence of political nous.

The headline was wrong of course. The worried Liberal should have produced a headline that said "I worry this is Tony's Ruddster moment".

All that nonsense about a new cabinet way of running the government, with consultation and briefings and consideration of alternative views has been swept away by a man with a blunderbuss blundering as he blusters from the hip ...

Trying to explain how a levy's not a tax ... because it's temporary ...

Even the commentariat can't save a man from this sort of monumental nonsense, and even the reptiles didn't try:

It made the standard hagiographic knob polishing of the bouffant one even more belated and pitiful than usual:

But Abbott has started a debate and lost control of it, and now the PPL remains caught up in that bigger debate, and mutineers will gather in dark corners and mutter, and no amount of the most strenuous knob-polishing by the bouffant one will alter that reality ...

What a monumental fool Abbott has been, to the point where the pond whether jolly Joe Hockey sold him a dump (as they say in the land of coat hangers and spear tackles and broken necks), and Abbott accepted the hospital pass before being collared and hospitalised...

Which is why the pond has opened its book. You see, Shorten is a cure which might be as bad as the current disease, but there are other Liberal diseases ready to do their work behind the arras ...

You could even open your own book for own amusement at home, though like James Packer, the pond urges everyone to gamble responsibly ... unless you happen to be a Chinese high rolling beached whale, in which case consider yourself stripped of your fortune and bundled into a plane to go home ...

Oh yes, they're all at it, and David Rowe manages to turn Abbott into a ginger, who beguiles hapless Scott Morrison - already indicted for shocking crimes against humanity - into even more waywardness.

Let the count down of the days begin, and more Rowe here to amuse us as we travel along singing a cheerful song:

... a stone is a stein is a rock is a boulder is a pebble, and an Abbott is a Gillard except when he's a Ruddster. 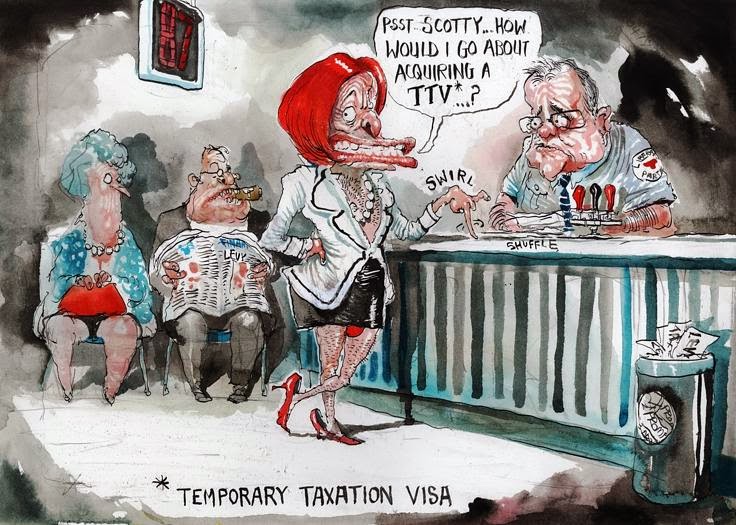