Speaking of an audience for Right Men ... 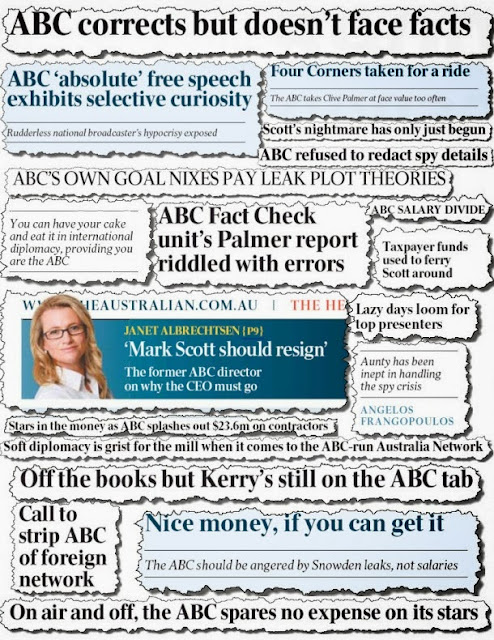 Crikey yesterday offered this delightful montage of the output of Murdochians in recent weeks.

But of course art requires incessant re-working - Mahler was always fiddling with his orchestrations - and just today the Murdochians have provided fresh raw material for a re-working of the montage. 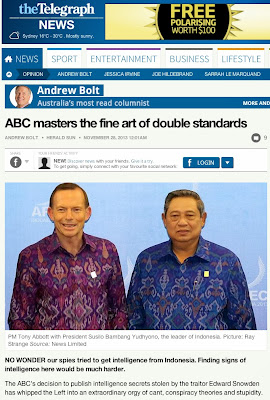 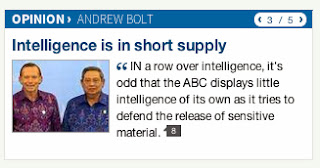 Of course the Bolter's rant is ostensibly about the ABC, the relationship with Indonesia, and intelligence matters, and traitors and cant and hypocrisy, but in the usual Bolter way, it turns out to be all about him.

Was there a man ever more dedicated to fluff-gathering from navel-gazing activities?

He (Paul Barry) also challenged me to reveal my salary as he'd just "revealed" his own.
Relevance? Zero. Deception? High. Barry in fact revealed only his ABC salary, the part of his income provided by taxpayers. He omitted his book royalties, speaking fees and other privately-earned income of no business of anyone but the tax man.
My own income from taxpayers? Not one cent, so what was Barry's point?
Let's hope our spies did pick up intelligence in Indonesia, because the ABC could sure use it here.

Yep, the Bolter is still writhing from Barry's salary tease, in the manner of many self-righteous zealots and demagogues.

It goes back to a syndrome identified a long time ago by science fiction writer A. E. Van Vogt, which he identified as 'The Right Man Syndrome':

'The Right Man syndrome' is a personality and behavioral pattern described by science fiction writer A. E. Van Voght and later popularized by the British writer Colin Wilson. The term describes an individual, almost always male, who has a dynamic yet fragile personality and possesses a manic need to feel that his actions are perfectly justified and correct at all times.
The need always to "be right" assumes supreme importance in the Right Man's life. "To challenge any aspect of a Right Man's life," says writer Bruce Wright, "is, to him, an insufferable attack on his self-esteem, to be met with whatever vitriol might be required to still the threat. (here in pdf form though you might appreciate the joke even more when you see it was published in Alternative Therapies in May 1998 as a howl of pain)

The point here is that the Bolter is deeply threatened by the way he's pulling down much more than Barry, while pretending to be a friend of the masses, who just happens to like opera and every now and then finds a bottle of Grange lurking in the lounge where it was left by a careless friend, so it can be scoffed with some fine home cuisine.

Now in relation to the ABC, another term might be more relevant:

Monomania:
1. Pathological obsession with one idea or subject.
2. Intent concentration on or exaggerated enthusiasm for a single subject or idea.

But when you come to bizarre assertions like this one ...

My own income from taxpayers? Not one cent, so what was Barry's point?

... the monomania theory has to give way to the Right Man theory.

Now the pond has a very loose and fragile understanding of capitalism, no doubt tainted by at one point reading Karl Marx and Mao - does watching Ronald Reagan in movies provide a sufficiently healthy corrective? - but here's how it works.

Let's assume a media mogul, who owns a newspaper. Let's assume it's the Melbourne HUN. Let's assume the rag is interested in readers and cultivating a readership. Let's assume, in the marketing arm at least, that these fickle creatures will be dubbed clients or customers or the key A-B demographic or whatever other term is doing the rounds.

These days it seems to be "audience". The brave marketing team at the lizard Oz did a study - a Pulse Panel - because the pond and the reptiles just Pulse all the time - to discover that Monday is planning day, setting the tone for the week ahead, while Tuesday is when the week really starts, as our readers make the most of small indulgences to ease into the week. 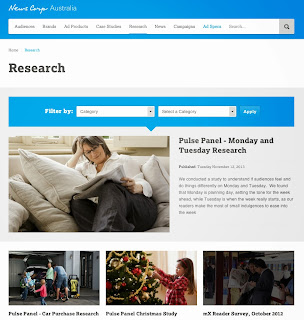 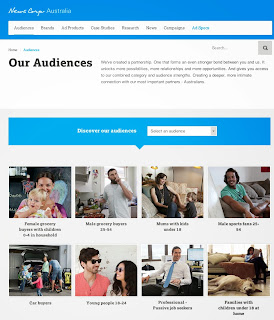 But don't take the pond's word for it, grok off to News Corp here to discover how you too can reach over 14.4 million Australians (assuming 22 million Australians, that's the Murdochians saying that they dominate 65% of the market).

We've created a partnership. One that forms an even stronger bond between you and us. It unlocks more possibilities, more relationships and more opportunities. And gives you access to our combined category and audience strengths. Creating a deeper, more intimate connection with our most important partners - Australians.

Yes, yes, deeply nauseating, when all they want to do is flog stuff to you and extract the readies from your purse, pocket or wallet, and it reminds the pond why there was always a fierce argument going on as to whether the marketing or the legal department was most full of the most insufferable types spouting the most insufferable gibberish ...

But back to capitalism. Now it seems to the pond, in a clear enough way, that the aim of the media mogul is to gouge Australians, which is to say taxpayers who have the readies, either by way of a shelf price or a subscription or by foisting advertising on them - in the ideal world, the mug punters pay to have the advertising shoved in front of them.

To achieve this, they need some content to fill in the nooks and crannies and crevices. Cue types like the Bolter, who blather on like a gigantic dose of verbal diarrhoea. The mogul pays types like the Bolter with money they've conned out of the taxpayers, hopefully tithing enough to maintain their mogul billionaire status, though things have got a little tighter these last few years, and flicking the rest as a handsome stipend to the Bolter types.

If that's the case, we can then arrive at a new formulation, one which applies just as forcefully to the Bolter's Ten network gig as it does to working for the Murdochians:

My own income from taxpayers? Well thanks to them I get paid a shitload - nah, nah, sucks boo - by the Murdochians and by the Ten network, and even when I stick a lot of it in the short term money market and pick up shares, I can thank the lord that the taxpayers are so generous in the way they reward me. So what was my point again?

Of course the Bolter's pay could derive from a family trust set up years ago by devoted parents, and he now donates his time free to the HUN and Ten, as a community service, but deep down the pond suspects it's the taxpayers who are really footing the bill.

Of course you can't even begin to discuss any of this with people who are right men. They're too intent on insisting on stupid pedantries - not a cent - removed from reality.

They're not interested in nuance, subtlety, or the way the actual world works. They're just interested in their own infallibility, and their complete and utter righteous capacity for being correct about everything.

There's another interesting way of noting this in passing, and it comes courtesy of generally grumpy Paul Sheehan today, scribbling about a local murder trial in Simon Gittany's smile fades:

Sheehan sees nothing wrong with noting that he had a prejudicial opinion formed before the verdict:

Simon Gittany is an innocent man. These were the first words I wrote on Wednesday morning, before the judgment in his trial for murder. I was prepared for the worst, and this was going to be my provocative lead.

What an astonishing admission. Yet even as he covers the guilty verdict, Sheehan maintains the prejudice:

All the journalists I talked to who were covering the trial had concluded he was guilty and that, if it were a jury trial, Gittany would be burnt toast.
But this was not a jury trial. This was a trial by a judge alone, Justice Lucy McCallum. Such is the chasm that has grown between community values and judicial technicality that the conviction rates in trials by jury and trials by judge alone now diverges starkly. Juries are much more likely to convict than judges.

So does Sheehan apologise to Justice McCallum for his prejudiced, jaundiced view of her work? Nope. He quotes from her extensively, but there's not a single admission that his provocative lead was provocatively in error.

Instead he continues to maintain the rage about the role judges play.

But that's the way it is with the right men. Things might turn out differently, but they never say sorry. They never shut up and they never surrender, and long after others might have reeled into a magic water night, there's Sheehan still spouting his prejudices. And getting paid for it by the Fairfaxians, courtesy the long-suffering, tax-paying readership.

So is there any upside as we ease ourselves into the middle of the week, and some foolish taxpayers piss money against the wall on Murdochian and Fairfaxians products that support righteous men like the Bolter and Sheehan?

Well sometimes their money finds its way into the right pockets, which is to say cartoonists like David Pope.

What else is there to say about the poodle Pyne and his latest island adventure as yesterday, the lads prepared for Piggy?

(Quick, Pope has another go at it, here, this time with video games, top of the gallery today only). 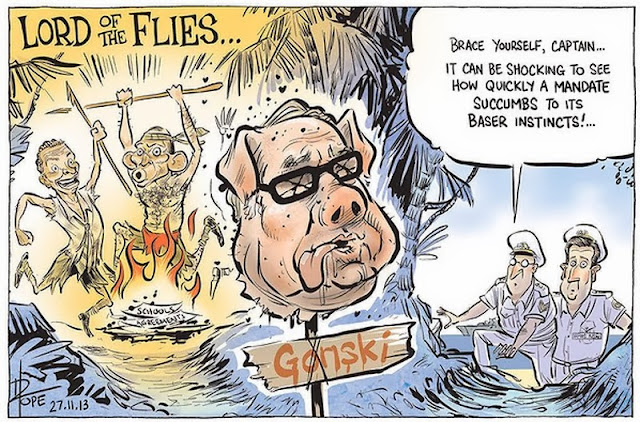