Eavesdropping on the crony commentariat ... 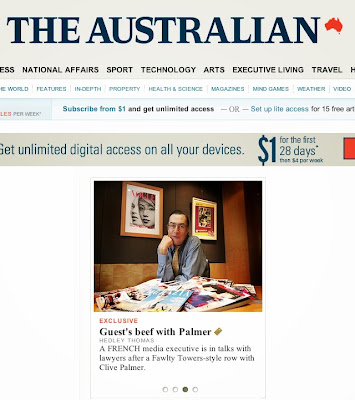 The pond always likes to start the week on a light note, and so let's thank the long absent lord for Hedley Thomas ...

You might recall that Thomas was at one time perceived as a hot shot, ground-breaking investigative journalist.

These days, he's more a forlorn, lonely Randy Stone figure who covers the Clive Palmer beat for the daily.

The pond isn't the only one to be bemused - cf Crikey's The Oz v Clive Palmer, may be paywall affected. Yes, it's been going on since before June of this year ...

Desperately whipped up stories in quest of an eggbeater are a key part of this beat. Which brings us to this bit of froth and bubble today: 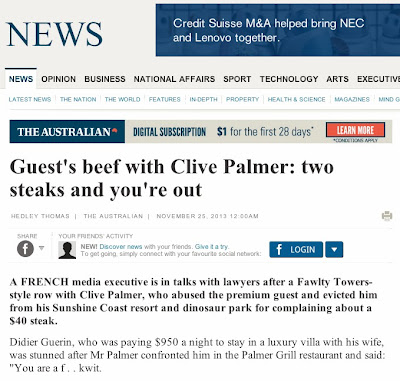 There's something really weird that infects the reptiles at the lizard Oz when they embark on a crusade.

You can see it in the relentless distortions, misrepresentations and denunciations involved in the crusade against climate science. Theoretically the rag accepts that there are human impacts on climate, but practically they maintain the rage by endlessly publishing pieces that push other barrows.

The same can be said for its misreporting of the NBN, which, with the help of other Murdochians, has now seen Australians accept a bizarro world where copper is good enough, and fibre an indulgence, and possibly in the process handed the country a very expensive upgrade bill a couple of decades down the track, no doubt to be paid for by consumers who want to join the wired 21st century.

At least in the case of copper, you can see a point. Foxtel, for one, wants people to stick to its boxes and its HFC technology, locked in and shorn like sheep for their weekly offerings. It's the perfect tithing business model,  as the churches worked out long ago, if you can keep the faithful locked in and ignorant ...

But in the case of Clive Palmer, the ongoing presentation of stories of the Fawlty Towers kind is beyond the bizarro.

No doubt the rag hopes that the drip drop of stories will render Clive impotent in Canberra, and it will somehow help their man, and yet no one seems to have tweaked how weird it is to have the servile lackeys of one billionaire rage at the servile lackeys of another, foreign billionaire. Oh okay Clive is a Queenslander and that makes him foreign to any sensible southerner, but you catch the drift ...

What this story does is demean poor old obsessive-compulsive Hedley Thomas, who seems to have received stern orders to run endless stories about Clive, never mind the quality, feel the width.

It gives the rag itself the air of a Fawlty Towers tabloid ...

As noted, Clive is from Queensland, which is a natural throw to another story about an equally weird Queenslander, one Campbell Newman, featured in The Graudian's Queensland verging on a one-party state, says corruption fighter Tony Fitzgerald.

Who writes these headers?

It is a one party state, and Newman runs a government with an enormous majority, and there is no balancing upper house, and only now does it seem to have dawned on the populace - they say some Queenslanders are a little slow - that it can do what it wants. The notion of the committee system providing balance and review is a farce, as Newman made clear by sacking, wholus bolus, a committee he didn't like.

It seems that the hapless Dr Levy has at last worked out that his behaviour on the front page of a Murdoch rag might have diminished the reputation of the CMC (Newman Government axes PCMC), and it has led to the bizarre sight of politicians proposing a return to an upper house.

But don't you worry yourself about any of that - Independent's call for state Upper House leaves Premier Campbell Newman unmoved.

But will you find the reptiles at the lizard Oz trawling through Newman's garbage on a daily basis? Of course not ...

Meanwhile, if you head off to the local brand of the Murdochians, you'll find tub-thumping parochialism of the most pathetic kind: 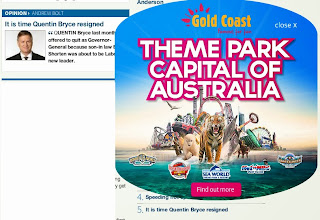 There it is in black and white, irrefutable evidence that the Bolter is as dumb and as weird as Flint and the ACMers, who have lathered them up into a fine old frenzy, though in most dignified terms, in Her Excellency descends into politics ...

Descends into politics? Why of course ... politics is full of snakes and vipers like Campbell Newman and Tony Abbott, a mugwump bog swamp of appalling creatures, requiring the wearing of white gloves at all times like a Tokyo taxi-driver ...

In his ratbag polemic, the Bolter reminded the pond of just how utterly tedious the crusading at News Corp can get. Not that the Bolter will expect Bryce or Abbott to take any action. It's just an indignant dog whistling squawk to do a bit of column filling.

In the process, the Bolter attempts to draw up a list of Bryce's crimes, but can't come up with many, instead clucking about how a partisan GG might have us at each other's throats ...

Yet another Jaffa in the aisle moment. Can anyone think of any time when the Bolter hasn't had his fingers on someone's throat, wrenching and tearing and throttling and blocking off the air and giving the carotid artery a really hard time?

She demanded more leadership in tackling the drought and global warming, and even launched the book version of the Garnaut Climate Change Review, an alarmist bible written by prime minister Kevin Rudd's adviser on global warming.

What a tedious man he is. Strip warmist and alarmist out of his vocabulary and he'd be reduced to grunting and farting ...

What on earth does he make of the prospect of Prince Chuck ascending the throne, given that Chuck routinely indulges in all sorts of "alarmist" talk, not to mention taking a firm stand against modern architecture. And yet here's the Bolter getting all prissy and pompous about Bryce, and crying shame and calling 'resign, resign'.

What a goose he is. Next he'll be having fainting fits ...

Meanwhile, over at the Fairfaxians, that other goose, Paul Sheehan, who routinely transforms into a generally grumpy and fearful Chicken Little, is still maintaining the rage, in Tony Abbott's 10 ways out of this mess (forced video at end of link)

Yes the magic water man has ten guaranteed solutions for Tony Abbott in relation to Indonesia, proving that shameless hucksterism remains alive at the rag.

Only last week Sheehan was peddling paranoid fantasies of the wildest kind, drawing this satisfying rebuke from Jonathan Holmes, here:

... That morning she'd (Miranda the Devine) claimed that The Guardian had ''sat on its bombshell allegations … for five months''. And she knew why: '
'This is the end game for the bleeding heart Left and its media enablers: to prevent the Abbott government from fulfilling its election promise to 'stop the boats'.''
Her fellow News stirrer Andrew Bolt agreed: ''Hatred of Abbott and his signature boats policy is driving much of this hysterical media coverage and damn the national interest.''
And so did Fairfax's Paul Sheehan: ''The Guardian had possession of the security leak for months,'' he wrote on Thursday. ''Nothing happened while Labor was in power.'' Mark Scott's decision to run with the story ''was consistent with, on his watch, the ABC's institutional hostility to Coalition policies on asylum-seekers … The ABC has got what it wanted.''
What addle-pated nonsense.

The pond loved it, especially the use of "addle-pated", though whether it should be hyphenated is a matter of fierce controversy.

Still it conjures up Sheehan and the rest of the crony commentariat in a single apt world:

addlepated - stupid and confused; "blathering like the addlepated nincompoop that you are"; "a confused puddingheaded, muddleheaded fellow"- Isaac Sterne
Eccentric; peculiar: "[Her] estates . . . are odes to addlepated excess, a melange of priceless antiques and thrift-store horrors" (Michelle Green).
Senseless; mad: "led the addlepated charge of the Light Brigade at Balaclava" (Thomas Flanagan) (dictionary here)

The pond now understands why the Fairfaxians persist in running the addlepated Sheehan. It gives them a chance to run pieces explaining how and why he's addlepated.

But it's the business of the addlepated to just go on blathering, and for any criticism to be water off a goose's feathers.

And wouldn't you know it, Sheehan's leading his own addlepated charge again today. It's still all a conspiracy, it's still all the fault of Mark Scott and the ABC:

None of this should be a surprise to Scott given that it was his ABC that instigated the last disaster in the relationship, the Four Corners report on Indonesian cattle slaughtering that prompted the Gillard's government's suspension of the live cattle trade.
Viner and Scott cannot now blame the Prime Minister, given that his hands were tied by a convention he chose to honour, much to my chagrin. The arguments in favour of publishing the spying leaks are obvious: that the truth will prevent government security agencies from excessive zeal, and the public has a right to know what is being done in its name. It is a strong argument, and I respect it.

Respect? Sheehan doesn't know the meaning of the word, or he wouldn't have indulged himself in wild paranoid fantasies.

But the public interest test can be rigorously contested in this case. The truth is something we all navigate every day, so as not to give offence or create enmity. Governments do the same. Yet neither Viner nor Scott has bothered to enunciate how, in the ''public interest'', the positives outweigh the negatives. They have, with Abbott and the spooks, joint ownership of the toxins flowing through the relationship. And neither has come close to justifying their actions.

Presumably Sheehan read what Holmes had to say. Presumably he failed to understand a single word of what he read.

What does he imagine the Fairfaxians would have done if The Graudian had turned to them with a ripper of a story, in its own way as compelling as Obama and the chancellor, albeit with more parochial consequences?

Just as it isn't Abbott's fault for what happened in 2009, it isn't Scott's or the ABC's fault that Abbott fumbled the ball like an English cricketer ...

If he'd done it with style, when it counted, at the very first moment the scandal broke, got on the front foot, stared down the approaching demons, it could have all been different, and he wouldn't have needed any of the blathering inane Sheehan's suggestions ... and Fairfax readers wouldn't have had to wade through the crony commentariat scribbler who still is presented as their way to start the week with a thoughtful read.

Now there's the real scandal, right up there with poor old Hedley Thomas ...

(Below: besides, the cartoonists must be fed). 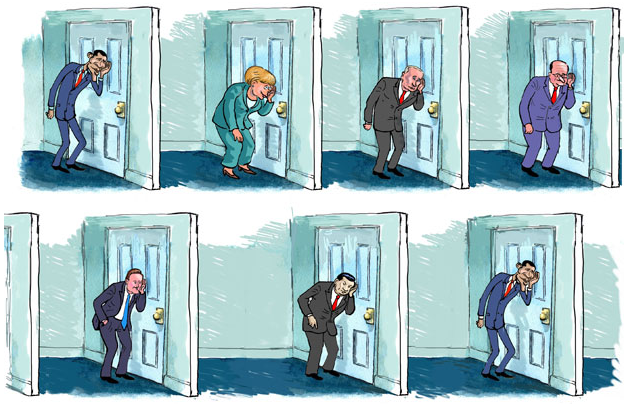 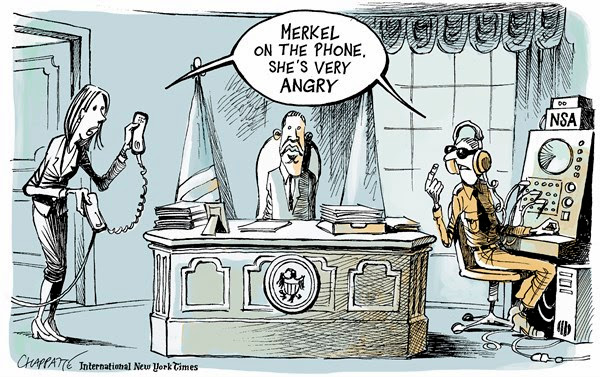 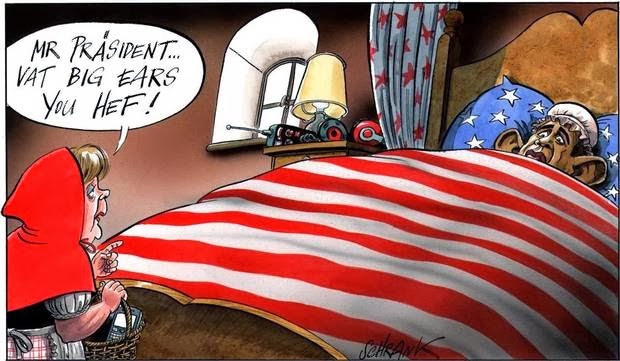