Piers Akerman, and say a prayer as the ditto heads have their picnic ... 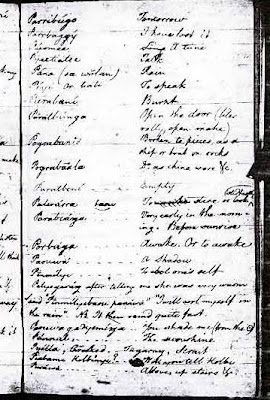 (Above: an extract from the notebook of Lieutenant Dawes showing his attempts to learn the language of Sydney Aborigines. Gad sir, and in 1790. Enough of that black armband nonsense).
It was inevitable that the likes of Piers Akerman would hitch their wagon to Tony Abbott's bit of possum stirring about welcome-to-country ceremonies.
You don't have to wait long to find out where Akker Dakker stands in Sorry to say this but hypocrisy unwelcome, as he unleashes his full array of cretinist cliches:
Full marks to Tony Abbott for highlight the appalling paternalistic sanctimony of the welcome-to-country ceremonies that every kumbayah coffee klatch has now embraced.
Always with the coffee drinkers! I don't even drink coffee - I prefer tea - but lord how I feel sorry for the regularly, relentlessly caricatured coffee drinkers, as if they must still carry the burden of Regency dandies strutting about in eighteenth century England.
As usual these days, there's a tinge of paranoia about the intertubes in Akker Dakker's meanderings:
The usual hand-wringers will clog the internet with their pathetic denunciations and accusations of racism but few, if any, can demonstrate any involvement in any practical attempts to alleviate the health, education and employment problems that beset many Aboriginal Australians.
Sure, and I'm deeply moved by Akker Dakker's regular ongoing involvement in many practical attempts to alleviate the health, education and employment problems of Aboriginal Australians. Which usually involves writing helpful articles about how black Australians are stuffed.
My own feeling is that these modern ceremonies should be abandoned, and replaced by the original welcoming ceremonies:
Aboriginal warriors Bennelong and Coleby were captured in 1789, although Coleby later escaped. Bennelong succumbed to the customs of ‘civilisation’, and his band of Camaraigal people began visiting the town after Governor Phillip was speared in the shoulder at a whale feast in Manly Cove in May 1790. Phillip forbade reprisal and negotiations with the locals were made through Bennelong. He and others attempted to resolve some of the differences with a people who had totally different world views and were speaking a difficult language, with most not bothering to learn Aboriginal languages. (here)
A good spearing in the shoulder as Akker Dakker sits down to blubber over his whale meat and pronounce a pox of coffee drinkers in the land should set a handsome precedent.
Meanwhile, in his usual way, Akker Dakker makes hay with the origins of welcoming ceremonies, and even the harmless didgeridoo. Is nothing sacred? What next? Rolf Harris and the wobble board?
Of course it being the culture wars all over again, it wouldn't do to get it all down without a mention of black armbands:
Let’s not pretend the welcome ceremony is more than a contrivance which allows some to play dress-up and others to don black armbands.
Funnily enough, when Chris Gardiner was writing Token ceremony openings must be brought to an end, he whimsically suggested:
The idea that you must open your gathering and deliberations by paying lip-service through a ceremony or incantation demanded by vocal spokespersons for what amounts to sectional interests, should offend most citizens.
For many, when the ceremony invokes a cosmology or belief system that they consider anachronistic at best, or superstitious at worst, it is particularly galling.

What is surprising is that the “keepers” of the tradition involved are not themselves regularly offended by how meaningless the forced participation is, are not angered by the co-opting of a practice that means something to them but is being used and retained by others simply for political purposes.

So let’s be brave enough to call for an end to pretence: starting each day of Parliament with the Lord’s Prayer (or the Our Father as it is known to some) should be challenged and the practice ended.
Fair enough. If you're going to get rid of recent hollow shams introduced by coffee drinkers and blacks, how about getting rid of a ceremony which Gardiner suggests even Wilson Tuckey avoids.
So after he's had his fill of whale meat and black bashing, how does the mighty Akker Dakker, fearless fighter against coffee drinking hypocrisy stand?
I disagree Bendan T, the Lord’s Prayer stands as a valid reminder of the Christian influence on our Western civilisation.
Oh indeed, or as Xavier Herbert once put it, Poor Fellow, My Country.
You mean, you thought Akker Dakker would run up against his Christian fundie constituents who worship at the feet of the Christian influence on western civilisation, even if they've only been in country a couple of hundred years, up against the blacks being in country for forty thousand or more?
Clearly you have no clear definition of the true meaning of craven cowardly hypocritical coffee drinking.
And finally a big shout out to the Akker Dakker reader who managed to drag in other favourite targets for a good whipping, in the style of the ditto heads who haunt the comments section:
What’s next? Are gays going to get a mention in every preamble ?

Give me a break!

Do muslims in Briton have to thank the traditional owners (whitey) before they belt out a speech?
Oh indeed, that's so relevant, it made me sing with pleasure:
If you go down to the Akker Dakker comments section today
You're sure of a big surprise
If you coffee drinkers and blacks and gays and muslims go down to the woods today
You'd better go in disguise.

For every black basher and homophobe and muslim hater that ever there was
Will gather there for certain, because
Today's the day the black armbashing ditto heads have their picnic.

Every ditto head who's been good
Is sure of a treat today.
There's lots of marvelous things and people to bash
And wonderful games abusing coffee drinkers to play.

Beneath the trees where nobody sees
They'll hide and seek as long as they please
'Cause that's the way the ditto heads have their picnic.

For every ditto head that ever there was
Will gather there for certain, because
Today's the day the ditto heads have their picnic.
(Below: will there ever be enough sorry ceremonies to explain to the world certain aspects of Australian culture. I keed, I keed, we loves ya Rolfie). 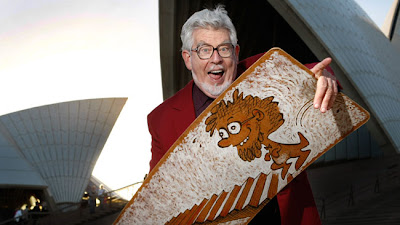