Miranda Devine, owl pellets, Julian McGauran, tin foil hats, and the truth is out there ... 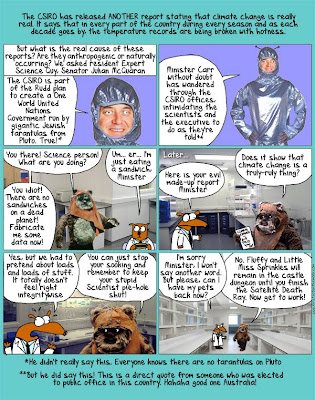 (Above: First Dog on the Moon discovering the pleasure of owl pellets from Julian McGauran. More First Dog here).
You have to have a short-term memory to truly enjoy Miranda the Devine's column Navy vindicated over sinking.
In it she announces:
In the end, the inquest into the fatal explosion of the asylum seeker boat SIEV 36 off Ashmore Reef last year did not scapegoat our navy. In fact, the Northern Territory Coroner, Greg Cavanagh, this week made a point of praising the ''great efforts, professionalism and bravery'' of Australian Defence Force personnel involved in the rescue of the Afghan asylum seekers after their boat exploded on April 16. He said ''more passengers might have died but for the action they took''.
Deary me, who could have suggested an inquest would be set up in a way that would scapegoat our navy?
Well it took a little searching, since the original link seems to have "disappeared" into the bowels of the Fairfax vault - another loon pond link bites the dust - and the column now appears in the Fairfax news store, at the generous price of "no charge", but a little diligent hunting will reward you with ... Miranda the Devine's Scapegoat insanity for our navy.
As if the tragedy weren't traumatising enough, they now find themselves the scapegoats in a murky political drama. Several are said to be resigning from the service, and who could blame them?

....The inquest proceedings have been an insult to our armed forces at a time when they are expected to risk their lives in dangerous wars overseas. They are particularly galling in a week when we have honoured our finest fighters with awards for gallantry in Afghanistan and when Trooper Mark Donaldson was announced as Young Australian of the Year, after winning a VC for doing exactly what he was meant to do - rescue an Afghan interpreter who was working for the Australian armed forces - that is, rescuing one of his own.
What a remarkable sight. A columnist denouncing hysterical innuendo about the way truth is tested in an inquest. As provided by said hysterical innuendoist columnist.
But then that's the Devine's way. Make sustained, unsupported attacks, and when the attacks turn out to be unsustainable and unsupportable, well, it's just a never no mind.
Another flashback to January's outburst:
....Yet the inquest, which began in the Northern Territory this week, has focused on the supposed blunders of the navy personnel and, most egregiously, has accused them of callousness for rescuing their own people first, after the boat exploded, as every military person in the world is trained to do.
And now a flash forward, in best Back to the Future style:
...And, despite suggestions to the contrary, he found nothing wrong in the policy of ADF members ''rescuing their own'' first.
What's more, he singled out for commendation RAAF Corporal Sharon Jager, who almost drowned when her life vest failed to inflate - ''despite this trauma, after her rescue, with her specialist medical training, she attended to the survivors for the next 10 hours.'' Cavanagh also praised the ''frank and honest evidence of all ADF personnel who gave evidence to this inquest''.

Hallelujah. After all the innuendo and negative media, the truth about the men and women of the ADF has finally been told: that they did their courageous and competent best to save lives in extraordinarily difficult circumstances that tragic morning.
Hallelujah. At last the Devine seems to understand that an inquest must test the truth, look at what happened, weight the evidence and produce a finding.
Meanwhile, is there an apology for the extraordinary outburst in January wherein she accused the inquest of scapegoating the navy?
Of course not. The point of a bunger is to go off, not worry about the effect on the letter box.
The rest of the Devine's current column is just a standard regurgitation of her usual stuff about boat people, and the need to be tough, and how it isn't working and so on and so forth.
At least when an owl indulges in regurgitation, you get some decent fibre, even bones, solid materials worth taking a look at - that's what we used to do in the bush when we found an owl pellet. Sad to say, the Devine doesn't have the wisdom of owls, and her pellets are quite repellent.
And sometimes utterly tedious.
Which is why we are always on the look out for new suppliers of owl pellets, and this week it's been Julian McGauran, as he took exception to the way the CSIRO was doing its job:
Senator McGauran says the organisation has been stripped of its independence and is doing the bidding of the Minister for Science, Kim Carr.
"Minister Carr without doubt has wandered through the CSIRO offices, intimidating the scientists and the executive to do as they're told," he said.

"This is now a political organisation. The executive have become compliant to the minister, utterly." (here).
Thereby confirming what any true believer in UN domination by black helicopters knows already. The truth is out there, if only you've been wearing tin foil as a hat to deflect the evil mind manipulation rays.
It eventually dawned on Mike Carlton, after berating Richard Dawkins for lacking humour and being impossibly insufferably arch and deserving a cream pie in the face for giving atheism a bad name (here), that sometimes you can only find the tin foil hat routine amusing for so long:
There can be no arguing with fools like this. You might as well reason with a bowl of peanuts. Sometimes the Dawkins approach is the only way to go.
Yep indoody deedy. There we have the Devine raging at an inquest, and then backing down without a thought to what she'd written a couple of months before, except in the most oblique manner - no apology for her naked abuse of the privilege of written a column for a major newspaper - and there we have McGauran slandering an entire organisation, and the ethics and professional standards of the scientists and executive therein.
Well I was tempted by all this to put up a snap of an owl pellet as an illustration of more substantial insights - if only into the hunting habits of owls and the contents of their gullets - but a stray reader might have been coming off breakfast, so it seemed better to go with some handy advice for aluminium foil hats, which these days work just as well as tin (the confusion arises from Americans and Australians who think that tin means the same as aluminium, or aluminum - stop it, you'll all go blind).
I know showing a snap of some geezer wanting to pose on the intertubes is lower than showing a lolcat, but still, the good word should be spread, so here's how to make your own.
Then you can add yourself to the many tin foil hat wearing souls who can be found scribbling columns and/or strutting the halls of parliamentary power: 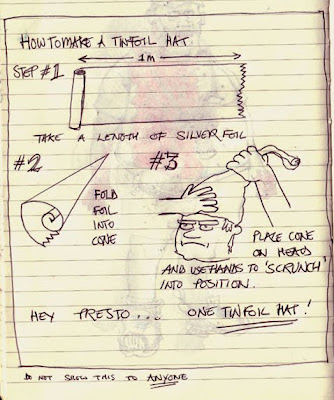