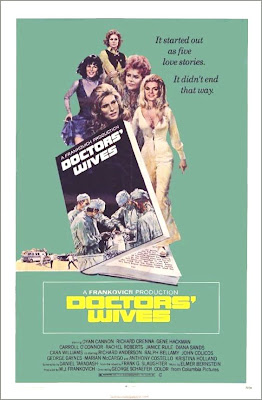 If there's one phrase as equally indicative as 'chardonnay sippers' of shoddy, lazy thinking, surely it has to be that mysterious sociological phenomenon known as 'doctors' wives'.
Naturally it's precisely the kind of wording you will find Miranda the Devine deploying, in Abbott's sledging of Rudd cuts through finer points of debate:
... at a different table, grumbling Liberals expressed outrage at his parental leave scheme and declared, ''Tony has peaked''. With such antagonism from the "doctors' wives" set and criticism yesterday from Peter Costello for being fiscally impure (like Howard), it seems Abbott is on track to win over the people he really needs to have on side if he is to do well at the next election - the middle class mortgage belt, aka "working families".
Who are these mysterious "doctors' wives" and why do they associate with the fiscally pure Peter Costello? As opposed to decent caring working families who are sensibly middle class, not that disgusting rabble known as the renting working class (we have some renters in the neighbourhood. Oh dear, you can tell from the gardens ... they never mow their lawns or weed their patches.)
Well it seems that doctors' wives been put on this earth to torment Miranda the Devine with fey dissenting opinions. It seems, as far as I can tell from Costello: the exit of the enigma, that they were the ones that foisted Malcolm Turnbull on the party, which led to the apparent tragedy of the exit of Peter 'the fiscally pure' Costello from the party:
Perhaps the Liberal Party should think twice about choosing leaders from difficult marginal seats such as Wentworth, packed with doctors' wives, greenies and small-l liberals whose cultivation is destined to alienate the party base.
Oh you horrid, wicked, naughty doctors' wives.
But what other distinctive features indicate you might be in the presence of doctors' wives? Well it seems they like the arts, and are always on hand in futile demonstrations, as explained in the Devine's To play king of the middle ground:
Crack journalistic investigative teams would be signing book contracts. Hannie Rayson would whip up another play applauded by chatterers and doctors' wives. The Refugee Action Coalition, Flotillas of Hope, Free the Refugees Campaign, Stop the War Coalition, North Shore Greens, Western Sydney Peace Group and North-West Friends of Refugees would be marching on Kirribilli House.
Oh you horrendous chatterers, how we hate you. Shouldn't you be sticking to macrame?
It seems Miranda's readers are also aware of the dangers, though I'm not quite sure where Turak is:
Miranda is correct. The Liberal base are apposed to this policy. The Nationals base even more so because they know what it would do to rural and regional Australia. If you included the Nationals in the numbers for this policy it would be 50/50 support. The rich Liberals in the cities (the doctors wives in Mosman and Turak) love this policy because they can buy and sell these Carbon Permits like derivatives and think they are saving the planet at the same time.
And yet it seems that their tastes are hard to predict, at least if you're Julie Szego hard at work explaining the charms of Tony Abbott to women voters in It's hard to stay pure with the mad monk:
Well, bollocks. It's time to pour cold water on this Abbott-has-a-woman-problem theory. This can't be done by scrutinising polls or by crystal-ball gazing about whether ''doctors' wives'' would still vote for a party led by the ''mad monk''. Let's admit that this discussion is pure pop-psychology - Venus-and-Mars-style gender stereotyping - let's go for it.
Oh you vexatious, indecipherable, frustrating doctors' wives. But it seems they have amazing powers of persuasion (here):
I chortle while I imagine the North Shore Doctors Wives threatening their husbands with all sorts of dire consequences if Abbot ever becomes PM – chief threat of which may be the withdrawal of the sexual favours Tone seems so afraid of.
Worse than the wife of Bath, these difficult doctors' wives.
And perverse and fickle. When given the opportunity to vote fro Clive Hamilton in Higgins, boy, did they ever let down Guy Rundle:
The argument itself, first: Higgins is the one of the foremost ’social liberal’ (or doctors’ wives) seat in the country. It was one of the few seats which swang towards Labor in 2004 on the strength of Mark Latham hugging Bob Brown (which was of course a disaster everywhere else). Most of its voters are tertiary-educated people who see climate change scepticism as a rural pathology pure and simple. A dapper, eastern suburbs, moderate, candidate arguing that climate change, humanitarian refugee policy and reconciliation are vital issues for liberal-minded people…well, the sky’s the limit. Such a candidate could head towards a 30% primary. (here).
Might that have been payback for Guy using the word "swang"?
Still, good old reliable David Flint understands the dangers they posed to Malcolm Turnbull. Turnbull must abandon the doctors's wives, he thundered for Quadrant, under the header, Goodbye doctors' wives. I really have no idea why the doctors' wives filled the good Flint with such disdain, but he was firmly of the view that they must be abandoned as the cheap hussies and minxes they so clearly are:
... unless Mr. Turnbull turns his back on the doctors’ wives of Wentworth, he will remain Mr. Rudd’s principal defence.

Oh you fickle, wretched creatures, you destroyers of planets, you ruiners of souls, you harbingers of doom for politicians, with your siren doctorly wifely songs.
Handily, Andrew Bolt's readers can etch in a little more detail about these singular folk (here):
The “doctors wives” on Chapel St will love their morning “monkey crap coffee” as they listen to Neil Mitchell on their ipods.
Eek, way beyond chardonnay in their perverse tastes.
And then I began to wonder if they really even existed. Take Akker Dakker, and their failure to turn out in numbers for Peter Garrett (here):
The green policies Labor thought would win the hearts of a growing constituency are now hurting, not helping, the electorate. Mr Garrett has been a failure on climate and environmental issues. He was supposed to deliver the so-called doctors’ wives to Labor, but looks as if he is the one in need of a good doctor now.
So called? Oh that hurts. What a cruel thrust. No parry to that remark. Yet Akker Dakker is reported as understanding the phenomenon (here), as he predicts a career of Iraqi-style shoe tossing for them:
What is clear, however, is that to our feral friends the saying "if the shoe fits, wear it" no longer applies.

If this leather launching trend really takes off, future generations of greens, doctors' wives, actors and actresses, and members of the 20-20 retrovision audience will have to remember: If the shoe fits, fling it.
Perhaps the reason no one understands this tribe, or can pin down what these shoeless souls think, is that they're always out when the pollster calls, as cogently explained by Bob Ellis (here):
Then you ring up on Saturday morning, when the Soccer Mums, the Doctors' Wives and the prosperous dads are out shopping or swimming with their kids. And you ring up on Sunday night, when everyone is home, but the ABC watchers are unwilling to take the call.

For god's sake, doctors' wives, remember your duty, hang around the phone day and night, waiting for a call from the pollsters! After all, as Akker Dakker explains, it seems you're the only true believers (here):
It comes as no surprise that Labor's true believers - the dilettante North Shore doctors' wives - are loathe to support genuine action - because it focuses attention on the abject failure of the ill-conceived apartheid policies they marched for and in which they placed their deluded, emotive trust.
But please, enough with the dilettante. As well as drinking vile coffee, how about you take up basket weaving, and if not that, surely your husband can spring for a pottery wheel.
I did find one kind soul who was sympathetic (here):
The crowing triumphalism of the New Right extends from Alexander Downer’s revisionist view of ALP history to the scathing dismissal of dissenters as chardonnay socialists, elites, doctors’ wives, and the latte society. Shouldn’t someone be giving an alternative view, even if it is occasionally wrong?
But even he understood that doctors' wives were occasionally wrong, or perhaps even inclined to grievous spiritual error. Look at the company they keep. Soccer moms and the latte sipping society and chardonnay swilling socialists.
Still, I know have an idea of the most useful function doctors' wives serve. Whenever you want to write about politics or social issues in a glib, stereotypical way, call them down for service. Crikey even went so far as to see them as a defining part of Miranda the Devine's world view:
Along with Paul Sheehan and Michael Duffy, she runs the somewhat poorly attended right-wing franchise on the SMH. Like her father Frank, can hold an argument and write well, despite a clear anti-Labor agenda. Baits Balmain basketweavers; damns doctors’ wives in Warringah. (here).
By golly, they get about a lot these doctors' wives. At first I thought they were just in Wentworth and Toorak, but now it turns out that somehow they've managed to elect Tony Abbott as the Federal Member for Warringah.
Damn you, damn you all to hell with your perverse, difficult ways, you doctors' wives.
Oh, sorry, I got quite distracted by this troubling, worrisome issue. The rest of Miranda the Devine's column rushed hot off the presses today for your endless pleasure features the Devine quoting Warren Truss quoting Shakespeare and explaining the many ways she loves Tony Abbott and how soon he will drive the demon Chairman Rudd from our midst. Personally I find one hit wonder Toni Basil's subtle evocation of cheerleading in Mickey more beguiling, but perhaps that's because I could pound out a Devine column in my sleep. I wonder if she's also inclined to somnambulism?
Well since quoting seems all the go, here's William Blake. You might have thought he was evoking the rose when he wrote this, but he knew much better the startling truth:
O doctors' wives, thou art sick!
The Invisible worm,
That flies in the night,
In the howling storm,

Has found out thy bed
Of Crimson joy;
And his dark secret love
Does thy life destroy.

(Below: further startling proof of the wicked worm-like lifestyle of doctors' wives). 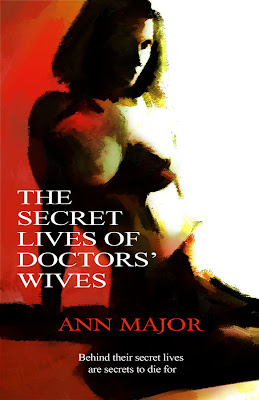 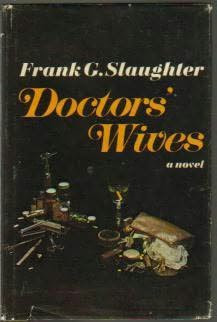 And now a final warning! Repent of your wicked ways, or the office girl will win! And so another desperate despicable doctor's wife will come into the world to confuse everybody about everything. Except we all know that you're to blame for it! Whatever it is or might be in the future, including but not limited to the fate of the Liberal party, its leadership and the number of affairs going on in Wentworth ... 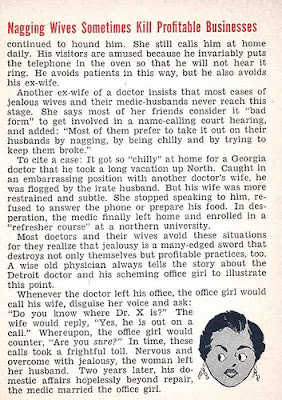