James Allan, chardonnay swilling lawyers and a bill of rights ...

(Above: James Thurber cartoon about wine snobbery, which no doubt sounded fresh and funny in 1937, and there's more on Thurber here and here).
Sometimes it takes just an eye-glazing word to stop me dead in my tracks.
There I was browsing away at James Allan's Rights bill is still a threat, brooding about the possibility of a bill of Rights in Australia, and this comes up in the fourth par:
Enter Brennan and the invitation offered to him by Labor Party proponents of a bill to speak to caucus. Presumably the hope is that Brennan will stiffen the spine of the government and get it to think again. Let's hope not. I'm a long-time opponent of these anti-democratic instruments and the Rudd government was brave to stand up to the chardonnay-sipping lawyers' wing of the party over this.
Now you'd think, and perhaps James did, that - what with the reference to the lawyers and to anti-democracy - he'd delivered such a devastating gotcha that he'd got me, won me over to his point of view.
But I'm sorry, I just can't overlook the vile slander of chardonnay.
I mean, it's okay in a jokey way when talking about loons on the pond, to rabbit on about latte sipping chardonnay gulping leftie wankers, but actual sightings of the conceit in serious papers by serious scribblers is now rare. Even in that doyen of inner urban hating elite columnists, Janet Albrechtsen, rarely uses it, though it does turn up frequently in her comments section (eg latte and chardonnay are the new Bex).
You have to turn to the banal mind of Gerard Henderson to discover a prattling Polonius commentariat columnist at easy with cliches, but even he's moved on from chardonnay:
The inner-city radical middle class has moved beyond bread and butter - and even focaccia and caviar - to such issues as international and national security, nuclear power and the environment. (here)
You see! It's not even humble focaccia, graced with a dash of caviar, that tells you you're in the presence of a "European" argument.
Indeed Henderson has even been known, in rare moments of reflection, to send up the concept of political correctness and inner city evil, as when he wrote about a Quadrant knees up party in Balmain (yep, Quadrant's office is in Rosebery Place, Balmain, presumably so they can make a close up study of cork sniffers, chardonnay sniffers and latte sippers in an anthropological, sociological way):
The Prime Minister praised Quadrant's role in questioning "political correctness", commenting: "Perhaps the intellectual divide, if you want to use that expression, in our community now is not so much between so-called elite opinion and popular opinion, but between political correctness and common sense". According to reports, no one said precisely what "political correctness" meant. However, this may well have been the first occasion in which the concept had been bagged in elitist/latte drinking/trendy inner-city Balmain. The alleged home of, er, political correctness - where P. P. both lives and works. (here).
But that was in the days of John Howard at the helm, and Paddy McGuiness was still roaming the earth, and beastly chardonnay swilling Labor lawyers were locked outside the gate, and a double irony would allow that Balmain was an elitist latte drinking basket weaving hell hole for all that it was also the new home of Quadrant.
Truth to tell, whenever someone defames the drinking of chardonnay, you know their arguments have the paper-strength thickness of tissue paper, and they're also out of date. In my area of the inner west NZ sauvignon blanc is the new chardonnay, so if you were going to talk about drinking habits of Labor party lawyers, you'd have to allow for more than a delicate unwooded chardonnay with soft fruitiness.
There's nothing like zesty tropical gooseberry passionfruit flavours delivered by an abundance of NZ brews to make you think you're drinking new age passiona - until you end up on the floor as drunk as a Labor lawyer skunk.
As long ago as 2007, Dennis Altman was scribbling in The Australian, Forget the culture wars, we all drink chardonnay now. The point being that you can now turn up in the dining room of the West Tamworth Leagues club and find worthy Tamworthians having a glass of wine with their steak. Sure most still drink beer, but you no longer have to be "European" (code words for French or Italian) to like a drink of wine.
As a result of being so upset about Allan resorting to chardonnay-sipping in what was supposed to be a serious column on a serious issue, I quite lost track of his arguments.
From what I could make out, they seemed to be as cliched as you might expect from a judgmental non-chardonnay quaffer. As dull as a glass of mineral water.
It seems that a bill of rights would transfer all democratic powers to top unelected judges who love to jet off to international conferences, thereby making huge inroads into democratic decision-making. Allan seemed to think that this was terrible, disastrous, and possibly very Canadian.
On another day, I might have gone with the flow, but I kept brooding about a mind which would resort to abusing chardonnay in such a careless, cheap way.
What if these judges love to quaff a decent chardonnay? What then?
(Below: aah, come on mate, forget that NZ muck, get some passiona into you). 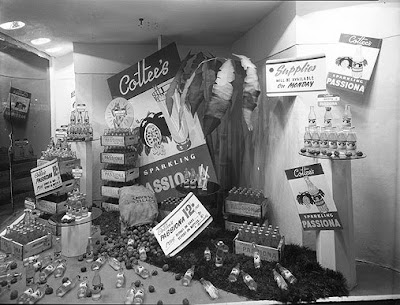