Christopher Pearson in the market-place, and Noel Pearson on Piers Akerman re-dux ... 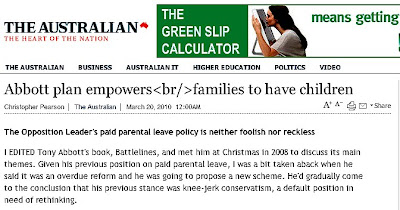 I spent hours and hours worrying about it.
What did it mean? Who were these funny <> families, and what was Tony Abbott's secret agenda in empowering them to have children?
I consulted books on cryptography, visited hacker sites, wondered if a password might be involved, tried my best split and concat techniques, even revisited historical precedents, such as the use of the Enigma machine to crack Nazi code and generate bad movies.
In the end, it turned out to be simple, almost banal. Turns out it's just a HTML tag:
This text contains (br)
a line break.

The (br) tag is an empty tag which means that it has no end tag.

In HTML the (br) tag has no end tag.
In XHTML the (br) tag must be properly closed, like this:
(here)
Eek, and every time I tried to type it in, to illustrate the thing, the HTML on this site went mad with joy, and started shoving in line breaks all over the place. Christopher Pearson unleashes chaos and anarchy on the web!
And yet, and yet, because today is tin foil hat day at loon pond, I knew deep down there was more to it. Surely what it's really saying is that Christopher Pearson is an empty tag who has no end tag, like a sounding brass or a tinkling cymbal.
Whatever, if you want to read Pearson on Abbott, yet again, and how he, Pearson, speaks to power, here's the link to Abbott plan empowers families to have children, but don't be surprised if the header has changed in the interim.
What you get of course is a gushing, super-enthusiastic supercalifragilisticexpialidocious explanation and endorsement of Tony Abbott's wonderful paid parental leave plan, with a slaying and a smoting of its many and diverse critics.
This isn't just cheer-leading, this is running on to the field with an axe and cutting off the legs of any troublesome opponents.
And what it also produces are some wondrously agile and remarkable gyrations and contortions. Take this summary dismissal of the fiscally rectitudinous Peter Costello as a neophyte zealot (that's right, Peter Costello, one time much loved treasurer, is now amongst the beginners, the novices, or if you will the newly baptized, persons newly converted to a belief, as a heathen, heretic or non-believer comes to understand true ideology of the free market):
Last week Peter Costello, the former treasurer, felt compelled to join the fray, dismissing the plan as silly and wrong in principle. I suppose we should be grateful for these champions of fiscal rectitude, even if in most cases their conversion to the cause came unannounced, late in the day and, like most neophyte zeal, lacked a sense of proportion.

Costello, on the other hand, seems to have somehow forgotten that he introduced a series of comparable levies to pay for the gun-buyback scheme, the East Timor intervention and Medicare.

Egad, sir, you don't mean to say that in disguise, with sleight of hand and flourish, that damned cad Costello was actually a socialist, dragging in levies (wash out your mouth if you mentioned a tax on big business, and use soap please) to pay for all kinds of socialistic claptrap. Or indulging in middle class welfare as a way of buying votes, while the guv'nor John Howard had nothing to do with it!
But what then of Abbott's scheme, which is surely the same kind of outrageous socialist claptrap?
It is a market-based scheme for a market economy.
George Orwell would be proud. Normally I resent those Orwell Law infringers and ratbags who carry on about Orwellian language, but surely this is as good as it comes, up there with the sign at the start of Dr. Strangelove - Peace is our profession. Luckily we're not talking about taxes, or a little George Bernard Shaw might creep into the conversation:
Pothinus: "Is it possible that Caesar, the conqueror of the world, has time to occupy himself with such a trifle as our taxes?"
Caesar: "My friend, taxes are the chief business of a conqueror of the world."
"Caesar and Cleopatra"
There's plenty more rich pickings, but strange to say, I got bored, and instead wandered over to read Noel Pearson's It's uplifting to stand on ceremony, and blow me down if he hasn't broken with the likes of Piers Akerman.
Akker Dakker, you might recall, embarked on an unprecedented, unprovoked assault on the didgeridoo, in Sorry to say this but hypocrisy unwelcome, as part of his ongoing campaign to make sure there wasn't one element of aboriginal culture in the land worth celebrating. And especially not welcome to country ceremonies.
But Pearson and Akker Dakker usually sing from the same song sheet - there's endless occasions when Akker Dakker has quoted Pearson, and said he couldn't agree more (Aborigines trapped in Never-Never is just one of them).
Funnily enough, Pearson might still be reading from the same song sheet, but the lyrics somehow have started to sound different:
Anti-Aboriginal thinking is like anti-Semitism: a complex of irrational ideas that cannot be understood as a reaction informed by personal experience, facts or spurious information that is believed to be true.
Irrational contempt becomes the primary reason for its own continued existence. This is captured in the famous dictum on the ineradicability of anti-Semitism: "If the Jews did not exist, the anti-Semites would invent them."

The irrational nature of anti-Aboriginal thinking through history is obvious. No matter how decimated, powerless, removed to the fringe or distant reserves Aboriginal Australians have been, anti-Aboriginal thinking has been virulent.
Oops, guess that means Pearson is now one of the usual hand-wringers clogging the internet with their pathetic denunciations and accusations of racism.
Carry on Akker Dakker ...

... few, if any, can demonstrate any involvement in any practical attempts to alleviate the health, education and employment problems that beset many Aboriginal Australians.
Oh dear, that poor poseur Pearson. Hark at how he scribbles:
Tony Abbott's unexpected ignition of a debate on the acknowledgment of traditional owners through welcome to country ceremonies at official functions convinces me that it is necessary to bring the central figure of thought of Australian anti-Aboriginal thinking to the surface.
The figure of thought at the heart of contemporary anti-Aboriginal thinking is the sweeping generalisation that Aborigines have been given too much of something, which may be tangible or intangible.

It is legitimate - and often necessary - to severely criticise Aboriginal organisations, communities or individuals. It is legitimate to criticise policies in indigenous affairs and reconciliation. Even if such criticism is incorrect, it is not racist.

It is possible to discuss such specific criticisms with those who make them.

However, when I encounter the underlying, constantly shifting, ever mutating sentiment that "the pendulum has swung too far" and that Aborigines have been given too much, materially or symbolically, I know that I am up against irrational thinking that is not amenable to rational debate.

It is patently obvious that during the past 222 years, the pendulum has never swung too far in favour of Aboriginal Australians in any political, social, economic or cultural sector of society.
Sheesh, Pearson doing a Charlie Perkins. Who would have guessed, and who will Akker Dakker be citing now as an excuse for his ongoing campaign to denigrate the didgeridoo?
On and on Pearson rants:
It is not a bad development in Australian culture that traditional owners are acknowledged and that there is a welcome to country.
If you can't sit through those few minutes or few seconds it is unlikely that you are only annoyed with the occasional political correctness or silliness of it.
Oh no, Akker Dakker, your favourite is accusing you of an implicit, or explicit, or whatever and however you care to see it, kind of racism.
Well thankfully we already know what Akker Dakker thinks of Pearson's contemptible kind. Tell him Akker Dakker:
So, too, the welcome-to-country ceremony, unauthentic but embraced by the sanctimonious who feel the need to publicly display some tokenistic relationship with people they may never see, let alone meet and converse with.
... Let’s not pretend the welcome ceremony is more than a contrivance which allows some to play dress-up and others to don black armbands.
It would seem, if I read Akker Dakker right, that Pearson is a tokenistic sanctimonious git who doesn't know much about black people - hardly ever seeing, let alone meeting or conversing with them - and his interest in the welcome ceremony is just a cheap contrivance so he can play dress-ups while those watching can don black armbands.
So there you have it. A tax is a market-place solution, and Noel Pearson is a humbug do gooder black arm band wearing leftie.
If that's not enough for a day's shocking, astonishing revelations on loon pond, then I'm sorry not even Mary Mackillop could relieve your boredom and ennui with a miracle ... and thereby score a hat trick after a hundred years of solid bowling and Warnie type finger tweaking (or so I'm told - my partner tells me my interest in and knowledge of sport is improving daily, as I become aware that the cricket season is now over and men fighting over their balls is now the new flavour).
(Below: Republican president Calvin Coolidge, not afraid to wear a black arm band in memory of Republican president Warren G. Harding, whose death elevated him to the highest office. Back then they didn't know real men refuse to wear black arm bands or eat quiche. Thanks to the likes of Akker Dakker, those evil times have changed ...) 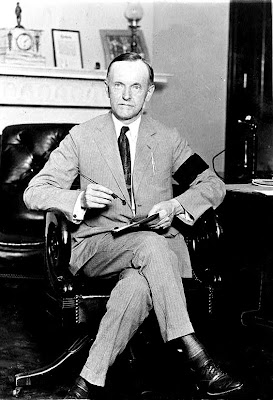