A survey of the works, feats and deeds of the new Billy ... 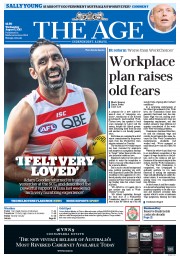 A titillating question to start off the day - no, not the Productivity Commission handing Labor a goldmine - please no hard questions on a weekend, the weekend is sacred in Canberra - and Abbott scuttling away like a startled crab, or the Adam Goodes matter, but that question at the top of the page:

Fair question, but let's put it another way:

Indeed, indeed. Good old Billy. For those too young to remember or to care, Billy can be found at the ADB here, with these lines jumping out at the pond:

Ambitious and pragmatic (‘Politics is trying to get into office’) McMahon was accused of leaking information, spreading calculated lies and engaging in intrigue. He was a difficult personality: Alan Reid wrote of his ‘nervy intensity’. Indecisive and accident-prone, he made damaging slips of the tongue: he once stated in an interview that the government ‘looks forward to increasing opportunities for unemployment in the new year’.

The ADB biographer does his best for Billy, but anyone alive at the time knew he just didn't cut it. Balancing Whitlam's follies and cabinet of weirdos was something approaching a vision, but stumblebum Billy only had one vision and that was Sonia in a slit skirt.

In modern times, he was certainly the worst, at least until Abbott came to power and became, in very short time, a hot contender for the title. Of course back before the war there were other top contenders, but few are now alive to make a direct comparison with the likes of Stanley Bruce (ADB him here).

The pond's attitude to Bruce is coloured by the visceral hostility the pond's father displayed at the mere mention of his name:

...he was regarded, mistakenly, as an Englishman who happened to have been born in Australia: too aloof and reserved to be an Australian. His spats seemed to confirm this. Having worn borrowed spats to the football to protect an old ankle injury from the chill of a damp Melbourne day, when the press scoffed he persisted in wearing them: he would not accept dictation on what he wore. As he was tall, well-built and, in the conventions of his time, handsome, the spats were the joy of cartoonists.

Ah, the ten pound Pom and the fruit meme: 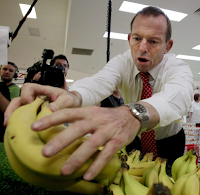 But enough of the fun.

On the surface the reptiles at the lizard Oz are upbeat: 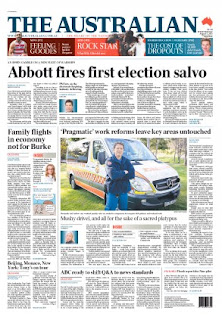 First election salvo! Wheel it around Hornblower, hard to starboard and let them taste the whiff of grapeshot.

But scratch the surface and the reptiles are still brooding.

And the Bolter was busy recycling the views of Peter "never had the ticker" Costello offering advice to anyone in the HUN town square who'd listen: 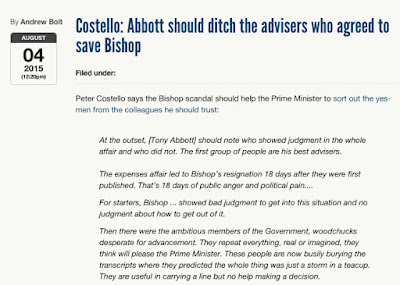 But then came this bizarre claim by the AFR - Bronwyn Bishop has no plans to quit politics after expenses furore. 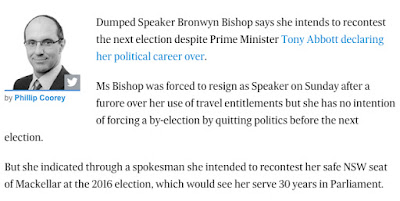 Amazing. Forget about whether it's the worst government. It wins the title of the 'most delusional' in a canter. No need to break into the sweat of a gallop.

So how's the boondoggling and the pork barreling going? 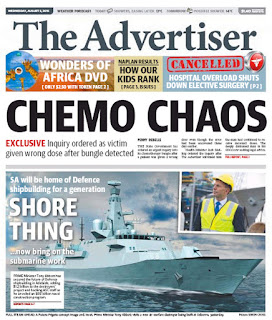 There you go, the greedy guts crow-eaters want more. "Now bring on the submarine work!" Insatiable, like a flock of mynah birds ...

And how are the sandgropers coping? 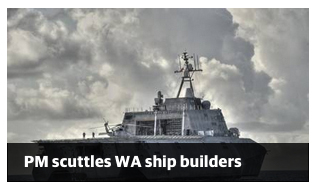 But it was the reptiles of Oz that came up with the best line as they lashed out.

The kool aid drinking editorialist clearly got out the wrong side of the bed and didn't get a chance to get to the water cooler:

Parliament without Christopher Pyne wouldn't be the same but is he worth $89 billion?

The reptiles were cynical, jaundiced, and Xenophonophobic: 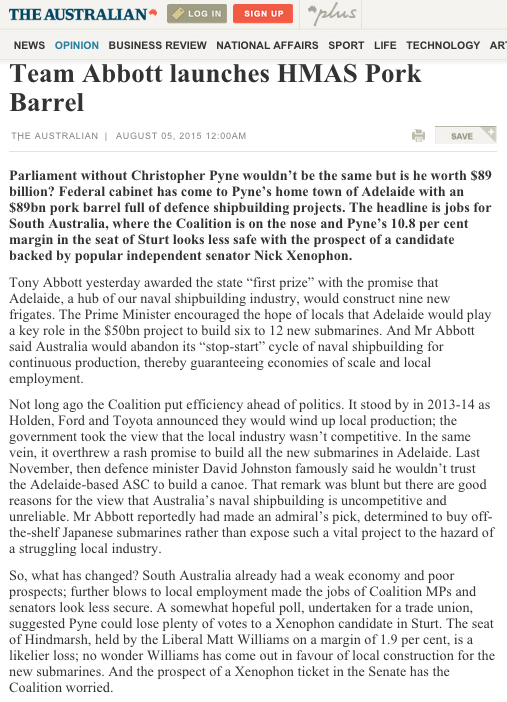 The cynicism of the pork barreling was too much for the reptiles: 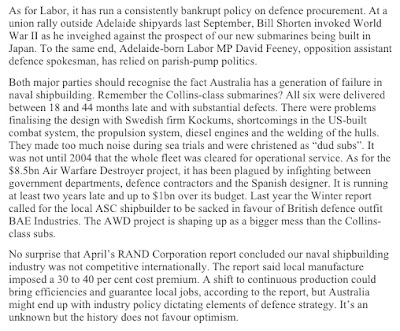 Forget the mention of the Swedish firm and the US-built combat systems as being at the heart of some of the problems, or the feuding Spanish designer, what's needed is a solution, and the pond embraces wholeheartedly the need to ship all of Australia off to international businesses who know what they're doing, and will know what to do with the place ...

Meanwhile, Abbott has managed to alienate the black leadership, and rightly so, because how weird is it to amend the constitution to recognise Aboriginal people, yet rule out Aboriginal people having a discussion of the matter.

What an astonishing failure of nerve, how cowardly, and especially for a man who flagged that he was going to be the Prime Minister for Aboriginal Affairs and steadily has eradicated any euphoria and replaced it with anger and hostility... 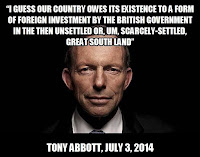 It was fear that motivated that call, and it's another example of Abbott's infinite capacity for the patented Billy collywobbles - all Abbott needs is the quavering voice, though the capacity to say things three times, which is to say three times, and I make the point I have said things three times, will no doubt serve as a viable substitute for the worst PM in living memory ...

Because it's coal, coal, coal for Australia, Mr. Cousins.

Which provides the pond with a handy wrap-up pivot.

The pond has run an occasional series on the lamentable fate of Bill Leak. Something in the man snapped some time ago.

The pond understands the importance of time serving and forelock tugging - it's a cold world without an income - but it remains a tragedy to watch a once proud cartoonist turn servile, and recycle the kool aid, as he did today: 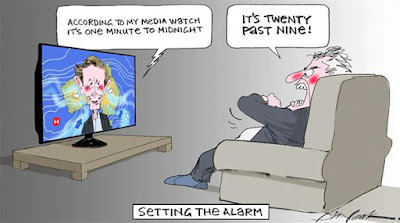 It will be remembered that the Oz editorialist and Chris Kenny have been trolling Media Watch for a response, and today Leak fell into lickspittle line.

Worse, it's not funny. Even the figure on the couch is the perfect exemplar of the reptiles: an angry old white man shouting at the TV ... talk about a useless demographic. 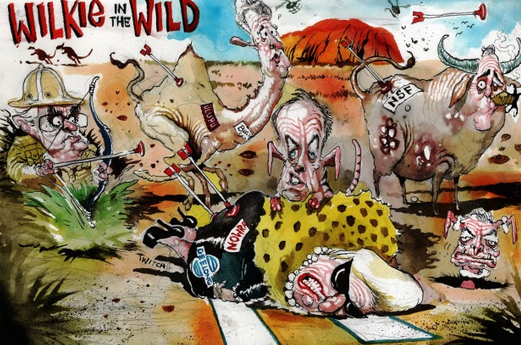 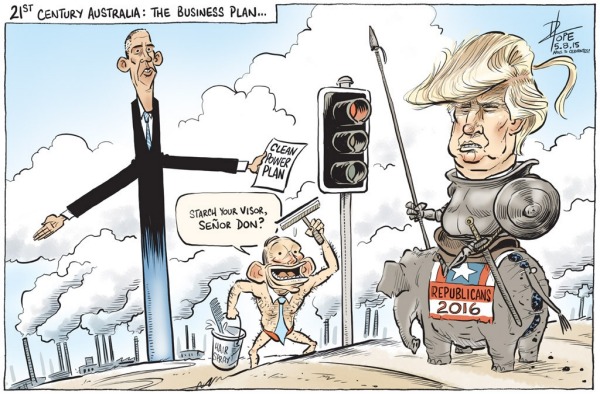 Only one thing's missing. Can the pond suggest, Mr Rowe and Mr Pope, that you short the market in spats? Spats are the go, spats is what's missing, get some spats in frame and all will be well ...