With Maurice in the house, we should be worried ... 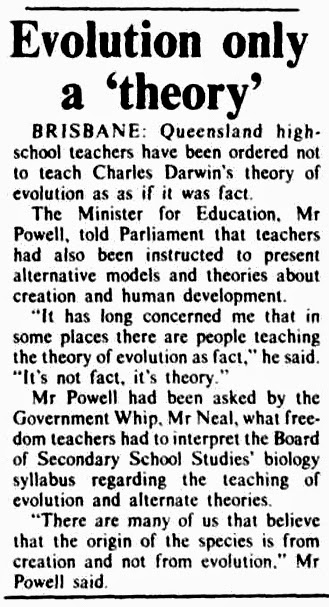 With the focus on Queensland, the pond is pleased to present this report from the archives, as copied from the Canberra Times, 29th March 1984.

The pond hastens to add that there is nothing symbolic about the year, it actually being a report from 1984.

Good old Lin Powell, you can Greg Hunt a brief note on him here ...

Meanwhile, starter, elevate your pistol, and let the hagiography begin ... 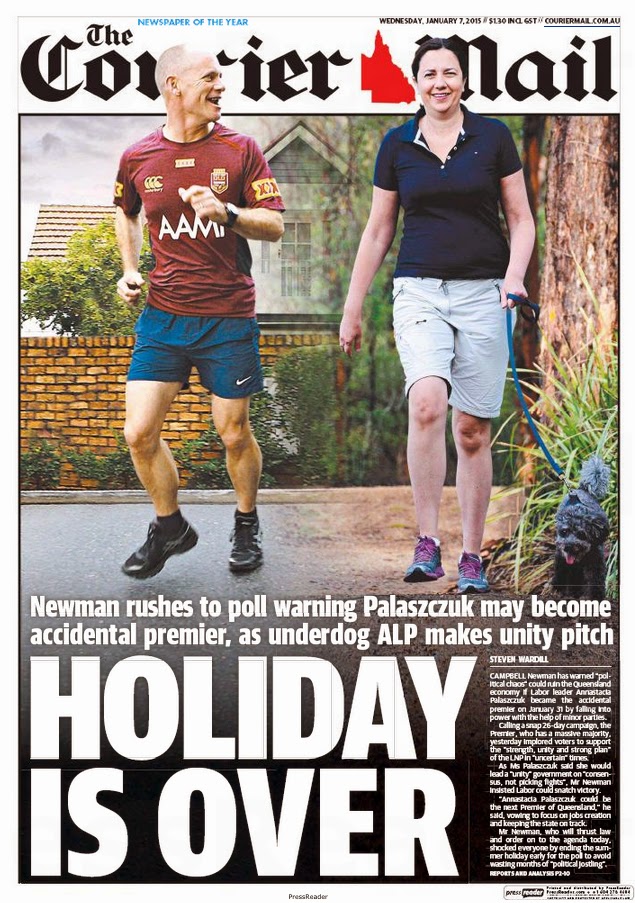 It might be called the knobby-kneed, sweaty-shoe jogging approach to vote gathering ...

Damn it, what a rough January it's going to be for the deep north reptiles over the slack summer season, slaving over a hot keyboard to get the bantam over the line ...

What says the Oz?

Well Newman is courageous, he delivered change from day one, he's forged long term plans to sell off the farm, but sadly he's had a few bad apples in the bucket. Luckily Palaszczuk is pretty useless:

Yesterday’s announcement, when Mr Newman was due to lead a trade mission to India, was a surprise. Conducting a campaign in peak holiday time, when many voters are on holidays and schools are closed, is almost unheard of. Mr Newman says he wanted to avoid business uncertainty but the election was due by March. Whatever tactical advantages Mr Newman perceives, former premier Peter Beattie was cynical yesterday, advising Mr Newman to go back on holidays. There is a precedent, however. In 2004, Mr Beattie called an election on January 13 for February 7. In that contest, Mr Beattie was helped by Queensland’s optional preferential voting system that allowed voters to “just vote one’’. The system should also help Mr Newman and allow voters to ignore the Greens and the farcical PUP, headed locally by John Bjelke-Petersen.
Three years ago, Mr Newman, Brisbane’s former lord mayor, was the popular “can do’’ man who appealed to voters as a leader from outside the political class and even parliament. His combative style, tough but necessary decisions and embarrassing controversies have eroded his political capital. But this election is about a substantial economic reform plan that is starting to work. Much is at stake. (You can google the rest)

Yes indeed, much is at stake, and all reptiles must do their duty, and never led it be said that Newman has embarked on a desperate and pathetic ploy ... 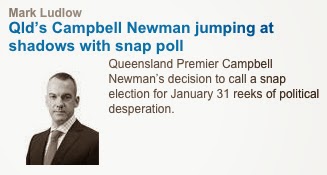 Damn you Fairfaxians, have you only got cauliflower between the ears? Next thing you'll be saying they already have a replacement for Newman lined up in the back office by a group of faceless apparatchik men ...

Meanwhile, as the pond continues to battle its wayward computer problems, we present as a public service the deepest thoughts of one of the world's greatest climate scientists, thanks to the unfailing reptiles at the lizard Oz, always willing to show a balanced view of the world.

The piece is titled With Nero in the house we should be worried,  which the pond can't link to because it would only lead to a begging letter from the indigent reptiles.

But the title is worth recording, because it might lead to some retorting With Newman scribbling paranoid hysterical comparisons to Roman emperors, we should be worried,.

But really this would be to miss the point of some fine comedy stylings, which begins with an outburst against socialised medicine - a reminder that the Abbott government, if it follows the advice of its chief business advisor, will continue to do its very best to dismantle the Australian health care system, and its capacity to deliver health care to the poor.

Strangely, even those who pay to belong to the world of Oz thought Mooorice was sounding a little off key.... Oh dear, dissent in the house.

Quick, centurion, double the supply of kool aid, and make it triple strength ...

Dammit, that Australian notion of fair play, and health care for all is still lingering in the air ...

But stay, what makes Moorice's effort so joyous?

Well how about this one?

Obama is the quintessential product of the progressive elites. As Mark Steyn writes in After America, “he seemed like one of their own. Columbia, Harvard Law, sort of editing a journal yet the only editor in its history never to publish a single article, giving a lecture or two on constitutional law, handing out leaflets on the south side of Chicago ... Obama has passed his entire adulthood in a very narrow unicultural environment where your ideological world view doesn’t depend on anything so tedious as actually viewing the world.”

That reference to elites and to a narrow unicultural environment coming from a man scribbling for the unicultural la la land of fortress paranoid Murdoch, and citing only a couple of names - Mark Steyn and the barking mad Mychal Massie and the Heritage Foundation, and a few other of the usual neocon sources as they gaze at each other's navels and talk about 'leets, as if Chairman Rupert was some humble member of the lumpenproletariat, and Maurice himself a humble tenant farmer ploughing the fields to plant his 'baccy.

But don't let the pond interfere with the editorial riches: 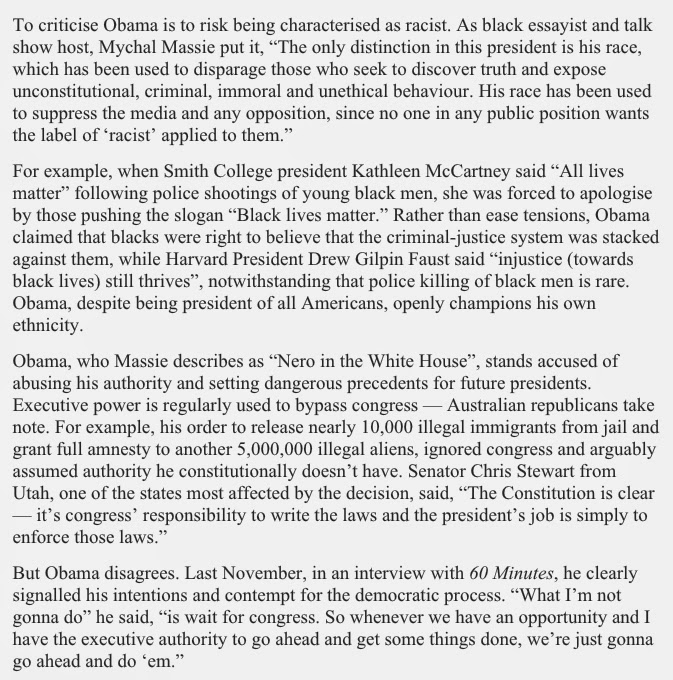 Yes, yes, all's well between blacks and the police in the Unites States. Just as everything's hunky dory in alien land.

And because Obama didn't win any popular vote, especially not for a second time, he came to power because uncle Claudius adopted him and named him as his heir and successor. After all, not being a Clinton or a Bush, it was the only way he could become emperor ...

Now when's he going to set fire to the White House, and play the fiddle while it burns?

Of course, you guessed it:

After all the previous Cuba policies deployed by various administrations have been a stunning success in bringing the country to heel, and who needs consumer financial protection, when there are such genial souls as the wolves of Wall street and Enron still hanging around to help consumers ...

As for climate change, it's well known that the climate changes all the kind, and sure it might have been warm last year, but it was only the third warmest on record, and as the world's greatest climate scientist - a title admittedly hotly contested by Cardinal Pell and the Bolter - why won't anyone listen to Maurice when he expounds on his love, his deep, undying love for lovely brown and black coal ...

Look, there are some who get it. There are some who are profoundly aware of the great international conspiracy ... hark, is that a black helicopter hovering over the pond's backyard? Does it carry UN markings? Is that why the pond's mainframe fucked up and is going to cost a mint? 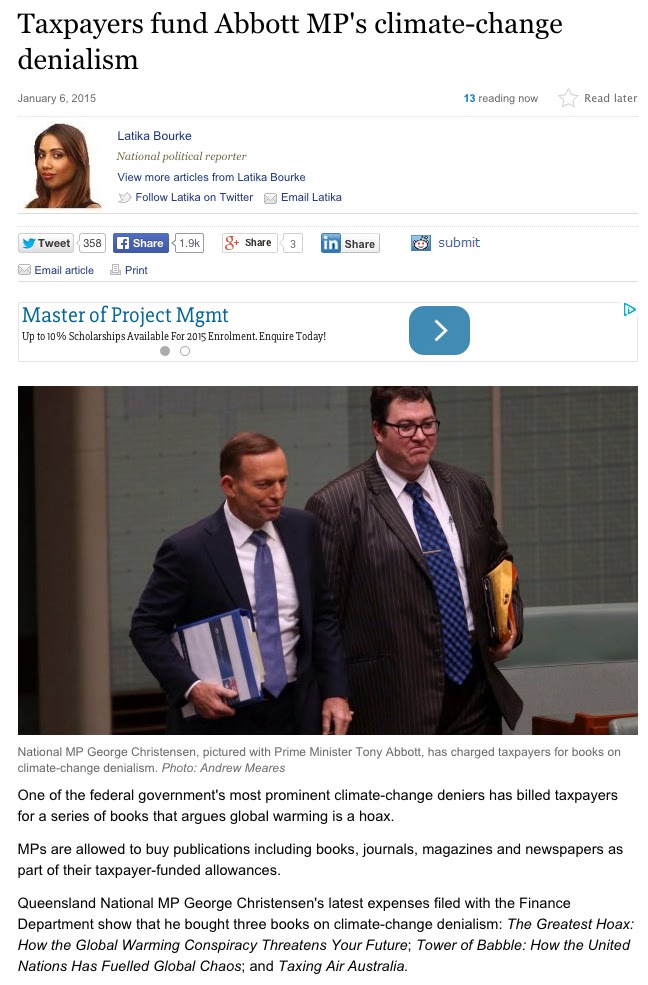 Oh dear, another great scientist from Queensland. And look at the fine company he keeps ...

But hang on, hang on, there's yet more Moorice: 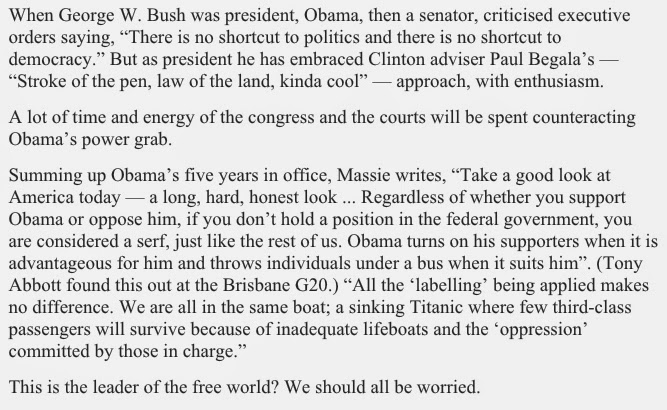 Yes, we should all be worried.

Does being barking mad automatically qualify you for a government position?

Is extremist rhetoric all the go?

Does embracing the covert rhetoric of racists - aided and abetted by a facilitating black commentator - qualify you for a position in Abbott land?

Does presenting action on climate change as a folly qualify you for the company of George Christensen?

Sorry, he's otherwise engaged, though apparently Moir caught up with him and penned a neat portrait (and more Moir here): 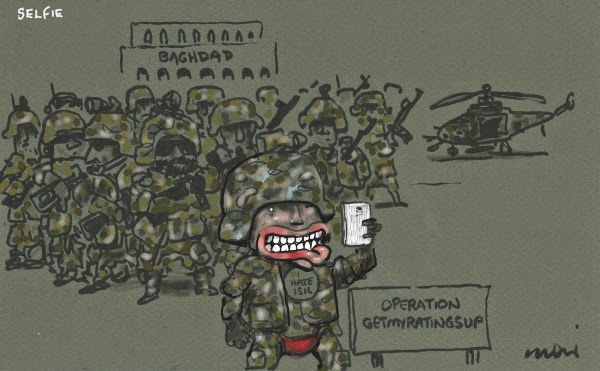