The trumpet blowers gather at the walls of Jericho, and surround the self-regarding Captain ... 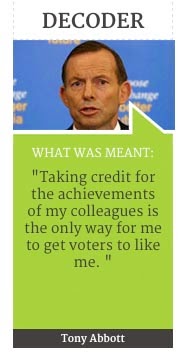 (Above: found at Crikey here).

Even as he tries to deliver his mea culpas and mend his ways, Tony Abbott manages to sound tone deaf.

You know things are desperate when the only one to lay on the regard is the one handling the trowel of self-regard:

"This is a very strong team," he said. "And one of the reasons why so many members of the team are able to perform so well is because they've got a very good captain.
"It takes a good captain to help all the players of a team to excel." (more at the ABC here about Tony Abbott declaring himself a 'good captain').

In the old days, the pond used to be told it was the British way never to blow your own trumpet, to always be seemly and modest, and if in search of praise, let it come from others and be honestly earned.

Trumpets were there for a purpose:

All blather of course, but it's profoundly ironic to see Abbott forced to blow his own trumpet because everyone else is out of breath.

It's the stuff of Shorten zingers - Titanic captains and all that - and of cartoons: 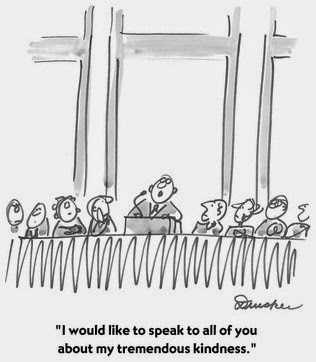 It's got so the pond can't keep up with the follies and the circus acts, and the reader comments are more agile. The newest gambit came about because everybody slowly began to realise that it was the man doing the self-trumpeting and the own goals, rather than the woman, despite the best strategic advice: 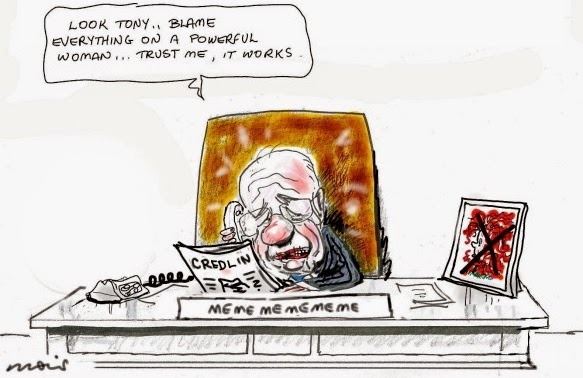 Is there any other clown willing to join in the fun in this bit of the circus act? 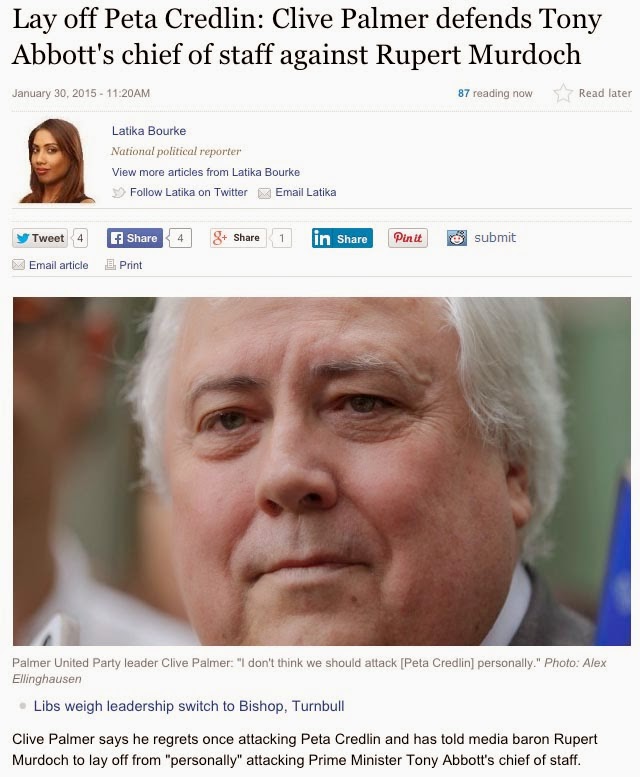 Yes everyone's in the act and in every way now Abbott remains the source of contention, an object of fascination as he writhes on the spit of anger and contempt.

And still it goes on. Just as everyone thankfully decided to give the Sir Duke saga a rest, along comes Tony Walker in the AFR this very day: 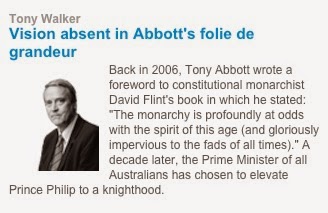 Yes, yes, they're always a bit slow at the staid AFR, but even as we attempt to git along, little dogies, the news continues weird.

What's an Abbott to do to change the look and jut of his cowl? 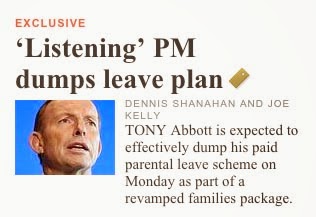 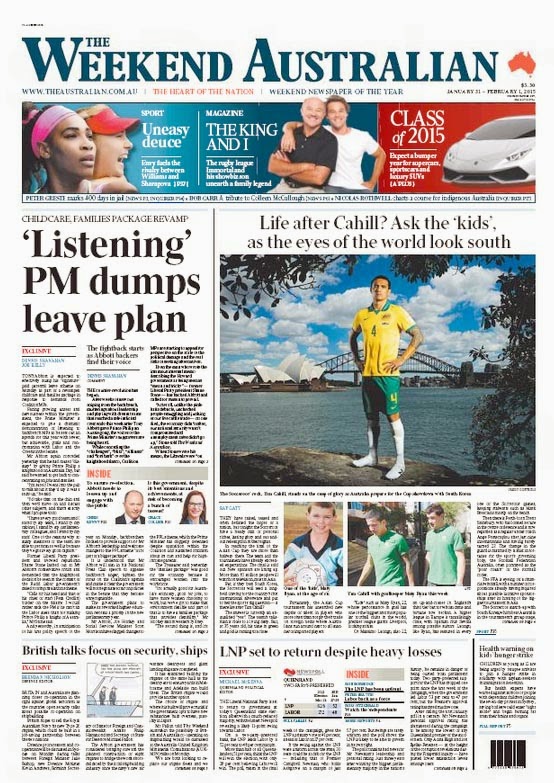 Yes, according to the reptiles in EXCLUSIVE mode, the 'listening' PM is about to dump his leave plan.

Of course if it had been a Labor plan, it would have been headed Gillard in excruciating backflip as policy farce collapses in a cow pat.

Oh okay, maybe the pond shouldn't be writing headers, but the point is surely correct.

This was the original 'Captain's pick' policy outing, much reviled by many, yet Abbott has clung to it tenaciously for years, and only now reluctantly, in the direst of hours, has he decided to 'listen'.

But how is this folding of the tent actually listening?

A listener would have had second thoughts the moment that Abbott devised the scheme on his own and announced it to the world. 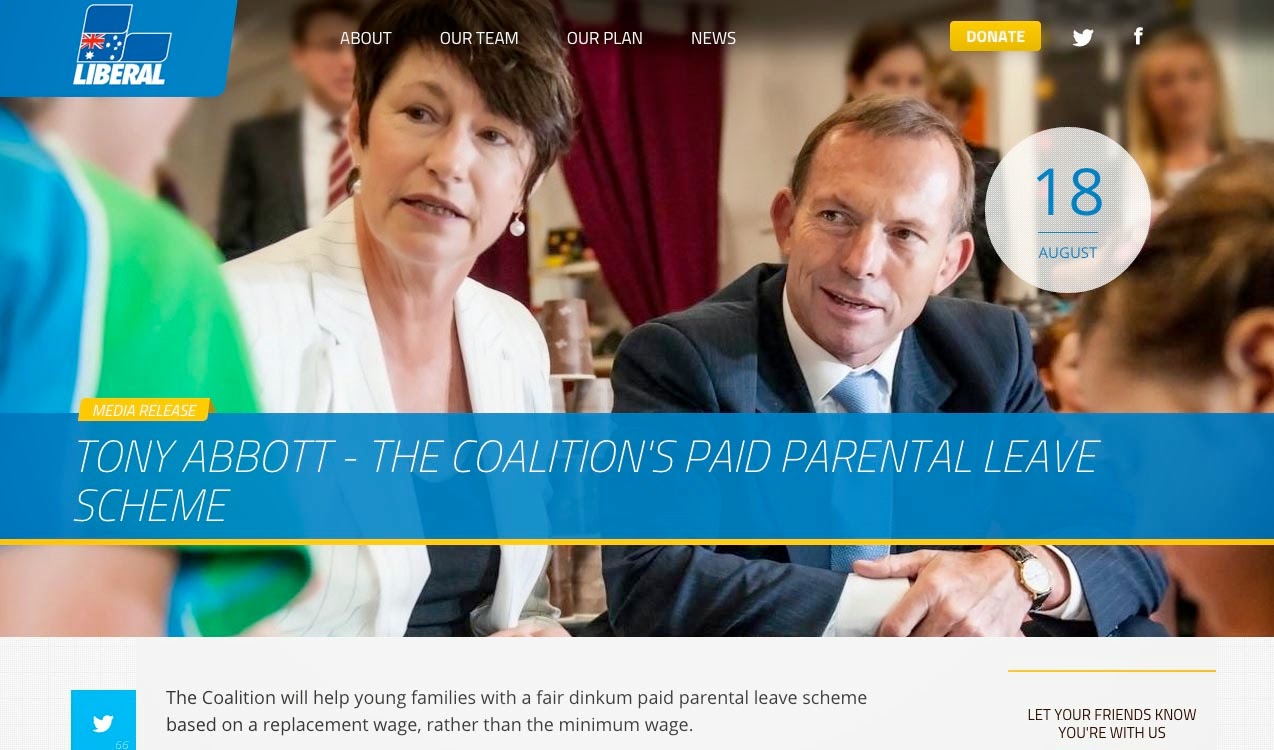 It had Abbott's paw all over it (along with the token woman) but what are we to make of this "fair dinkum" scheme now?

Well at last the knob polishers and forelock tuggers are starting to get back into the act.

The bouffant one has found his voice, or at least rounded up a few stragglers. 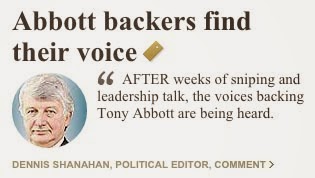 Say what? A dipstick long out of the game, discarded and irrelevant, now dusted off, and dragged back into the sunshine, with Shanahan in his column recycling the thoughts of the skipping Stone?

Yep that's how pathetic it gets as the one voice, the one backer is taken up by the reptiles: 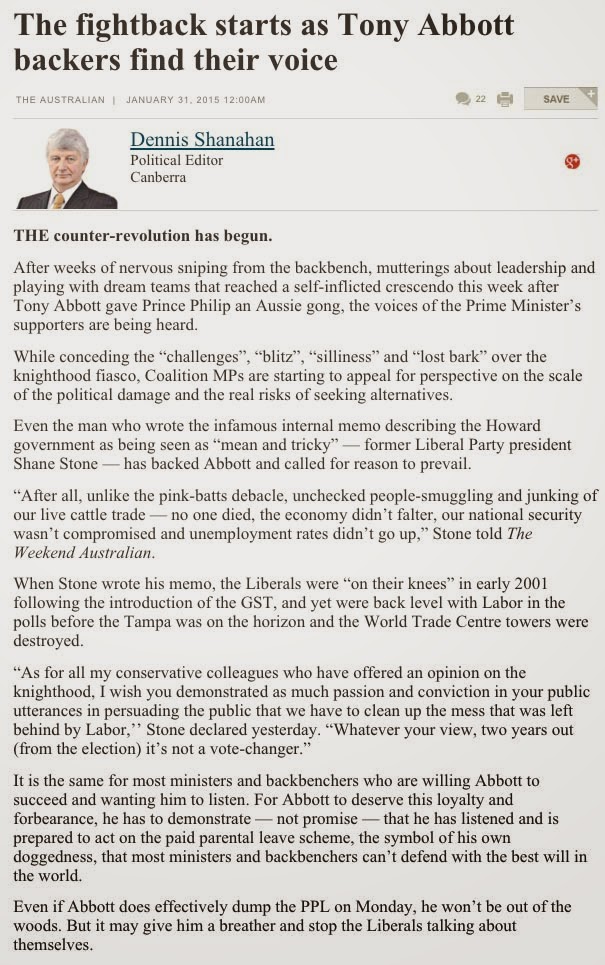 Could it get any more pathetic?

Well actually it could. There was another forlorn voice urging the troops to rally around the Union Jack (with bonus Southern Cross), scribbling away in the ABC with Abbott needs backing, not the boot.

Abbott knows full well that regaining the trust of his Coalition colleagues and the Australian people is a hard road back from here. If a harsh lesson has been learned that even confident leaders should consult and listen, this month's Medicare and Philgate misadventures haven't been in vain. But surely Abbott the man deserves better than what he has endured this week after his Bishop of Bradford moment. He certainly doesn't deserve to share Edward VIII's fate.
Schadenfreude may be pleasurably cathartic for those indulging in it. But when schadenfreude dominates our political discourse, not only Abbott has a serious problem: we all do.

Things are pretty desperate when there's a whining and a wailing, and a mourning about schadenfreude, as if Abbott's years of kneecapping, and relentless negativity should now count for naught, and everyone should rally around the stricken bully.

Harden the fuck up man. Politics is a tough game, Abbott gave it out, now he's copping it, and in policy terms in relation to the PPL, he's on the verge, according to the reptiles, of doing the most spectacular  flip flop, back flip of all.

Enjoy the spectacle, it's rare that this kind of circus comes to town for daily thrills ...

Meanwhile, in the world of Fairfax, the pond couldn't resist this juxtaposition yesterday: 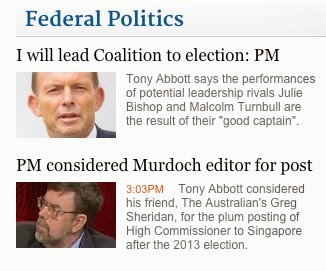 The man was so tone deaf that at one time he considered his chief bromancer for a plum posting, and it was only Chris Mitchell who saved him from the folly?

And so today in Fairfax?

You can read it here, but at its heart is the fallout from that latest folly, which naturally the reptiles at the lizard Oz have given the barge pole treatment:

News of the approaches to Ms Bishop and Mr Turnbull comes after Fairfax Media revealed on Friday Mr Abbott approached The Australian newspaper's foreign editor Greg Sheridan – who has described the Prime Minister as his "best friend" in university days – take up the plum role of high commissioner to Singapore after the 2013 election.
One cabinet minister labelled the offer "completely bizarre" and expressed shock the newspaper's editor-in-chief Chris Mitchell – a friend of Mr Abbott – confirmed to Fairfax that he had dissuaded Mr Sheridan from moving.
Mr Mitchell said: "Obviously Greg and I are personal friends, as are Greg and Tony, so I guess the offer was probably quite attractive but he has a pretty good job at the Oz too".

There's a man who not only rewards the Royals, he thinks and acts like a Royal taking care of his mates.

There's more in the story, but the pond particularly enjoyed this bon mot from an anonymous source:

A junior minister, however, put the counterview: "Rudd was a well-liked national leader. People were shocked because they woke up one day to find that he was gone, without explanation. Nobody would call Tony Abbott a beloved national figure. No one would be surprised if we got rid of him."

Now who can argue with that impeccable logic?

And so to Queensland with the news that, according to some sources, up to thirty per cent of voters are being motivated to vote by their anger and discontent arising from the federal government, and Tony Abbott in particular. (1 in 3 according to the Currish Snail here).

Well Queenslanders will get the government they deserve, but even the Currish Snail was sounding a little nervous on this day: 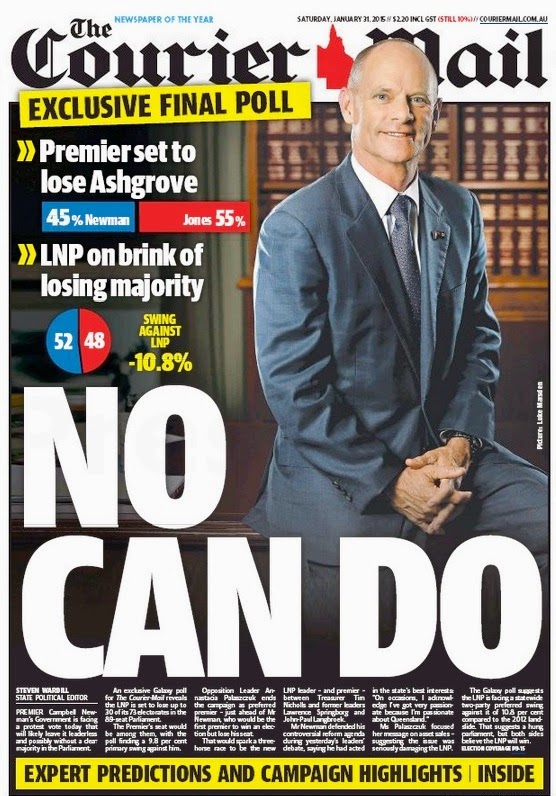 Totally unfair of course. Campbell Newman could always do. He could alienate the judiciary, basic legal rights, Alan Jones, anyone interested in land care and reef care and worship coal and  ...

Feel free to add to the lengthy list at your leisure, the pond is off to watch the coverage. What fun, whatever the result ...