In which the pond conjures up a modest proposal for reptile activism ... 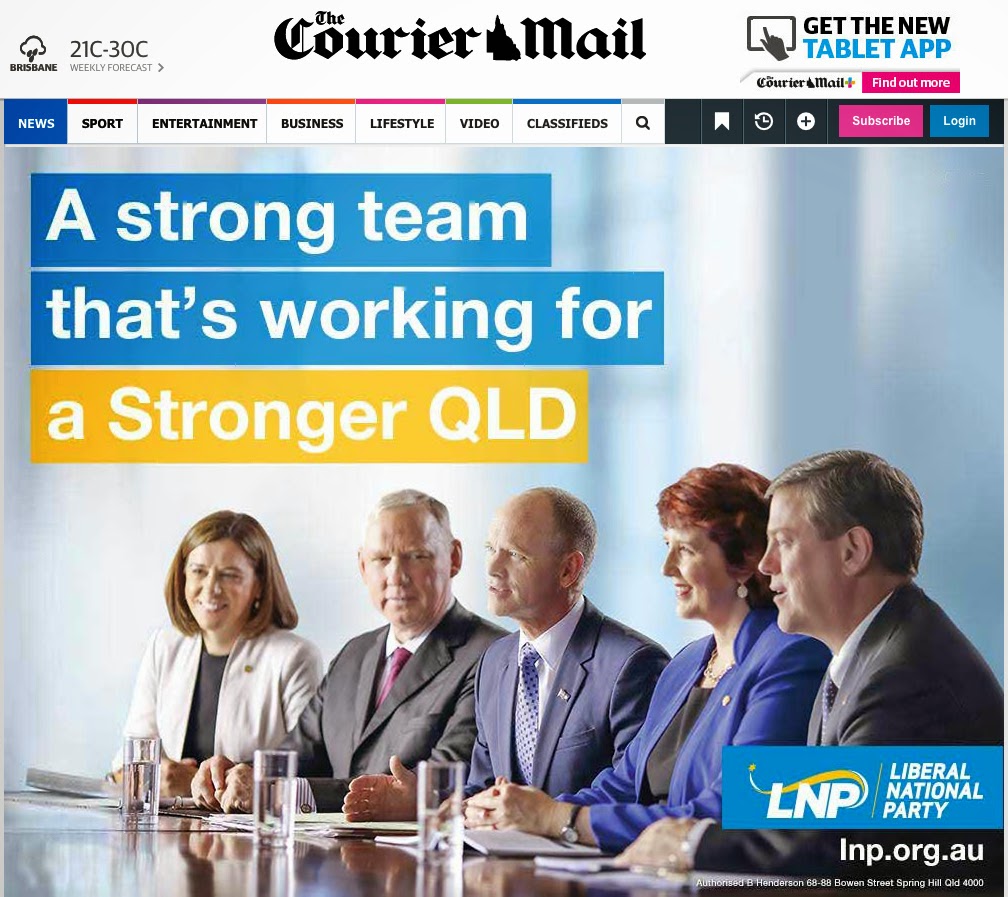 Desperate for a distraction, the pond couldn't but help admire the digital front page of the Currish Snail.

No Photoshop trickery involved. There's the masthead, and there's the presentation.

So now we know how cheaply a masthead can be bought and deployed in the celebration of campaigning bantams.

Meanwhile, the noise and hubbub continues, and all the usual characters are out and about: 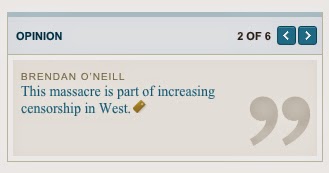 The pond was flooded with links, including this one to The New Yorker, and George Packer's The blame for the Charlie Hebdo Murders:

Because the ideology is the product of a major world religion, a lot of painstaking pretzel logic goes into trying to explain what the violence does, or doesn’t, have to do with Islam. Some well-meaning people tiptoe around the Islamic connection, claiming that the carnage has nothing to do with faith, or that Islam is a religion of peace, or that, at most, the violence represents a “distortion” of a great religion. (After suicide bombings in Baghdad, I grew used to hearing Iraqis say, “No Muslim would do this.”) Others want to lay the blame entirely on the theological content of Islam, as if other religions are more inherently peaceful—a notion belied by history as well as scripture.
A religion is not just a set of texts but the living beliefs and practices of its adherents. Islam today includes a substantial minority of believers who countenance, if they don’t actually carry out, a degree of violence in the application of their convictions that is currently unique. Charlie Hebdo had been nondenominational in its satire, sticking its finger into the sensitivities of Jews and Christians, too—but only Muslims responded with threats and acts of terrorism. For some believers, the violence serves a will to absolute power in the name of God, which is a form of totalitarianism called Islamism—politics as religion, religion as politics. “Allahu Akbar!” the killers shouted in the street outside Charlie Hebdo. They, at any rate, know what they’re about.

Indeed, though in reality Charlie Hebdo had also copped threats of violence - a death threat's a death threat, however you cut it - from the Jewish Defence League (to the point where there was talk last year of banning the organisation in France, here), and you don't have far to look to discover Bill Donohue in the Washington Post issuing a statement that Muslims were and are right to be angry (After Charlie Hebdo attack, U. S Catholic group says cartoonists 'provoked' slaughter). And what do you know, the Washington Post in the process of revising the story yanked "images offensive to various religious groups that did not meet the Post's standards").

As usual, Guy Rundle in Crikey here (paywall protected) was on hand to point out the nauseating wave of hypocrisy that swept over any number of people when it came to Charlie Hebdo's willingness to affront any and all religions, and any and all politicians, matched by the ongoing capacity of the media to blur or refuse to run offending Charlie cartoons:

Then the usual imbecility began, the sort that the now departed staff ofCharlie Hebdo would have pilloried remorselessly. Thousands reading their Twitter feed in line waiting for a hazelnut latte tweeted “#istandwithcharliehebdo” — cost-free, zero-content pseudo-solidarity that flatters the issuer. Politicians, commentators etc made sententious statements about freedom of speech being absolute, a right etc — as if the attack was some sort of opening gambit in a debate about religious vilification laws. American neocons issued effusive words of support, perhaps unaware that several Charlie Hebdo cartoons had ended up in Iran’s “Holocaust Humour” exhibition of a few years ago issued statements. French politicians, some of whom had tried to close down the magazine using draining legal assaults, now had to stand in solidarity — including President Francois Hollande, last seen on the cover with his dick hanging out of his pants, the membre petite with a speech balloon saying “Moi, Presidente”.
All of them had, years earlier, asked Charlie Hebdo not to publish the Danish Muhammad cartoons. Now, with the act done, they were suddenly supporters in retrospect.
US Secretary of State John Kerry, whose government has unquestionably received French DGSE buggings of the Hebdo office, said “we are all Charlie Hebdo”. Queen Elizabeth II, whose family have variously been depicted as vibrators, tampons, and everything else, issued her condolences...

...This conundrum is one of the reasons that culture conservatives with a dash of Islam-envy — people like Niall Ferguson or Andrew Bolt or Nick Cater — put such emphasis on the idea of a Christian revival in the West, and it’s also why they regard organisations like Charlie Hebdo or the Chaser or whoever, as the true enemies of the Western cultural revival.

Yep, after the fuss dies down, you can bet that the conservative commentariat will return to getting offended by satire and satirists targeting their holy cows, or demanding the Chaser lads be banned, or the ABC be shut down, or at least have its socks sued off, and otherwise do their level best to eradicate humour and satire from the planet. Because in the end fundamentalists tend to flock together when it comes to their own preciousness ... a thin skinned lot who can't take a joke (oh yes, there's a Leakian irony in that one).

But never mind Packer getting it wrong, and saying it was only Islamics that responded with threats, and never mind the hypocrisy of all those who've suddenly joined the Charlie bandwagon.

Which is why this story caught the pond's eye: 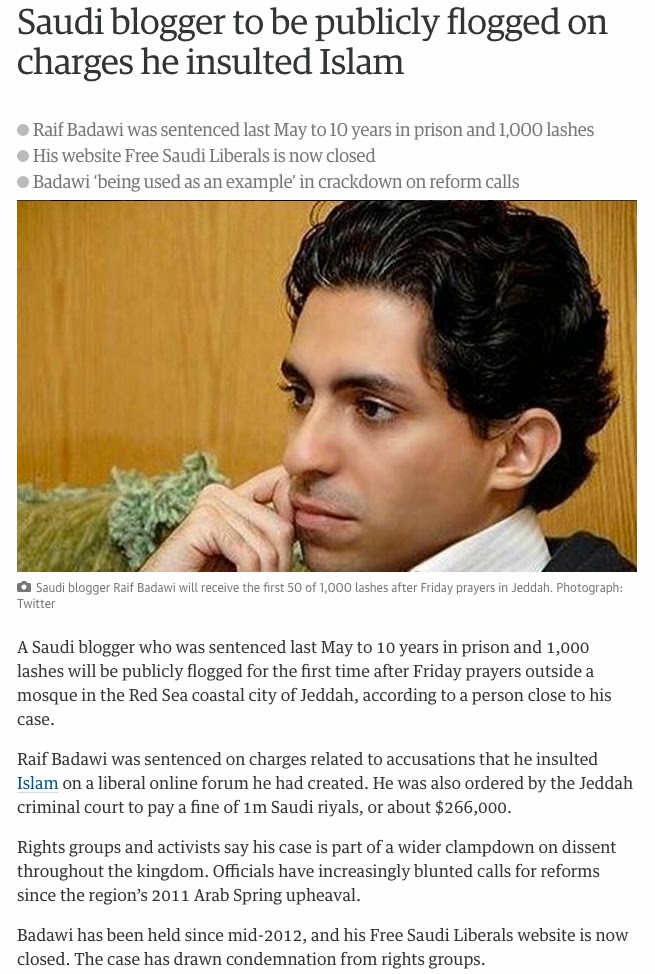 There's more in The Graudian here.

It's an outrageous act, not as bad as the collective slaughter of cartoonists and satirists, but still emblematic.

So instead of re-printing the usual blather from the usual suspects, can the pond politely suggest to the reptiles at the lizard Oz a path for direct action?

1. A front page editorial demand that so long as the punishment continues - it's scheduled to result in 50 lashes each week for 20 weeks - News Corp refuse to have any business dealings with Saudi Arabia.

3. A demand for the end of Fox News programs being made available in Saudi Arabia. (Fox News Huge In ... Saudi Arabia?)

4. A public humiliation, by way of front page editorial, denouncing Chairman Rupert's willingness, by way of business dealings, to fellow travel with a regime notorious for its fundamentalism, and his willingness to elevate money above principles.

Let's see how this might affect Chairman Rupert's willingness to fellow travel with Saudi Arabian potentates, including but not limited to the nephew of Saudi Arabia's King Abdullah.

It's not like there's not plenty of images around, or the business dealings have been covert and hidden from view: 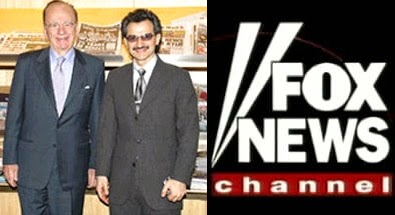 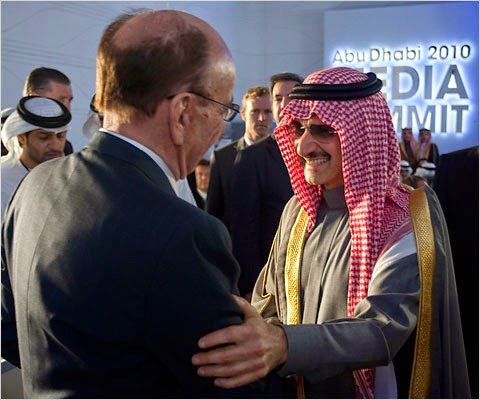 And while they're at it, they could do exactly the same for the Bush family and its fellow travellers and acolytes.

Is it likely to happen?

No, it's a lot easier and a lot more useless to offer up the usual blather from the usual suspects ...

Yet every fundamentalist, right wing member of the News commentariat is, in a way, in league with the repressive Saudi Arabian regime that thinks doling out a thousand lashes to a liberal blogger for daring to question and to insult Islam is the way to show fundamentalists how to forsake violence ...

In the quest for more distractions,  the pond couldn't help but note the AFR's invitation to try its new online Beta version for its site: 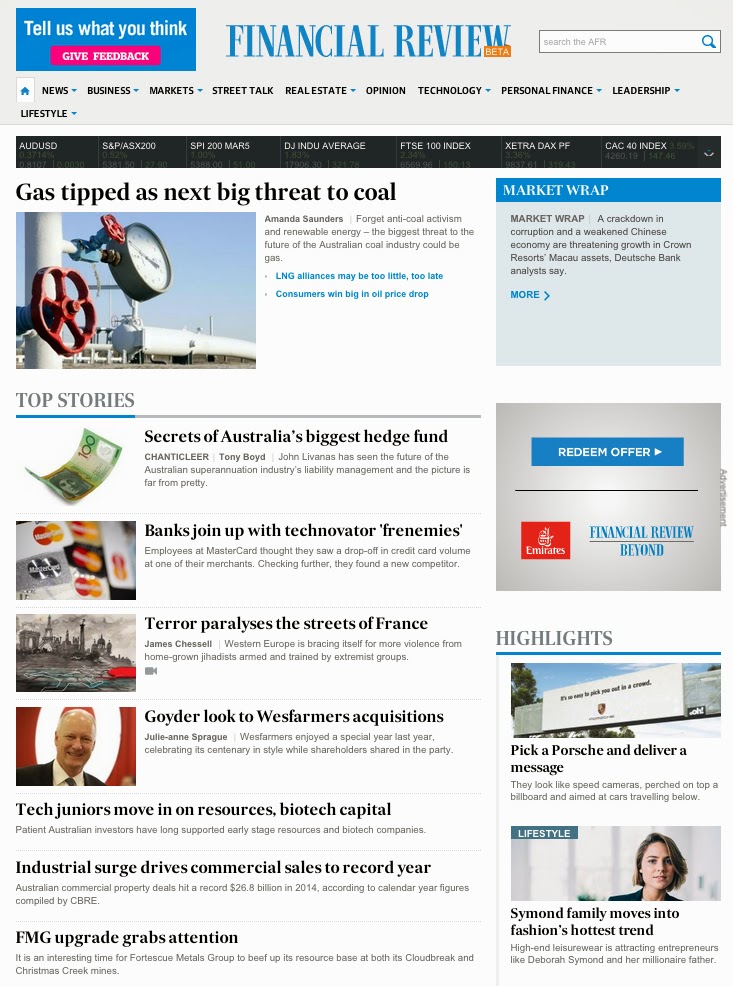 That's the top of the page, and below that the rest of the content can be reached by a never-ending scroll, and at that point, the pond realised it was truly old.

It seems every website, from the Graudian to the AFR and beyond, is embracing the simplified, simplistic, dumbed down look, for fear of alienating web users afraid of detail and depth.

As usual, there's a "tell us what you think" function, and as usual, whatever the readership might say, the management will go ahead and roll out the look, in which it has no doubt invested much time, and much deep thinking, and much money ... as to how to look as simplistic and dumbed down as a tweeting generation might require to stay involved ... without anyone stopping to think how they're alienating their current readership while the young are already off buried in Reddit and unaware the Graudian and the AFR exist. (Oh okay Reddit is also old school these days).

It's a bit like trying to explain to the movie business how they really need to do something about their old business model, which relies on territorial limitations that are now meaningless and routinely subverted (which is why the pond can advise that Birdman is a well made exercise in theatrical excess, which surprisingly induced in the pond a yearning for a gigantic movie full of Birdman action figure heroics, but didn't do much for the pond's disinterest in the theatrehuh, or the art of acting, or even wandering in undies in Broadway).

Never mind, at least the pond can still go about the business of blogging without being given a good whipping.

So let's revert to the reptiles at the lizard Oz, and the reptiles' resounding clarion call to arms and to action: Western democracies must confront Islamist terror scourge.

Indeed, indeed, we should, and so the pond looks forward to News Corp, in the immediate future, in its business dealings, treating Saudi Arabia as the North Korea of Islamic fundamentalism ...

(Below: an old Leunig) 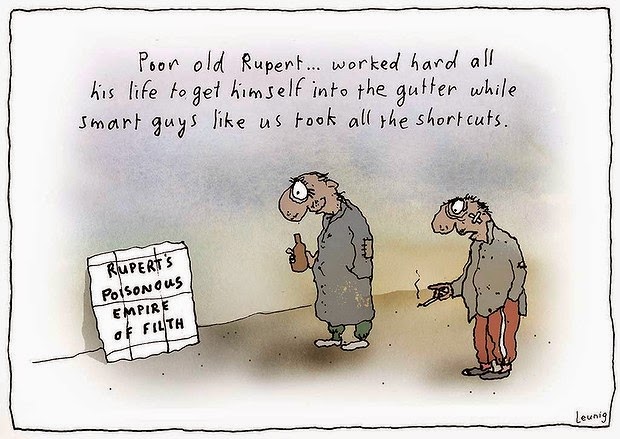 And now to the local cartoonists.

Pope went viral with this one (and more Pope here): 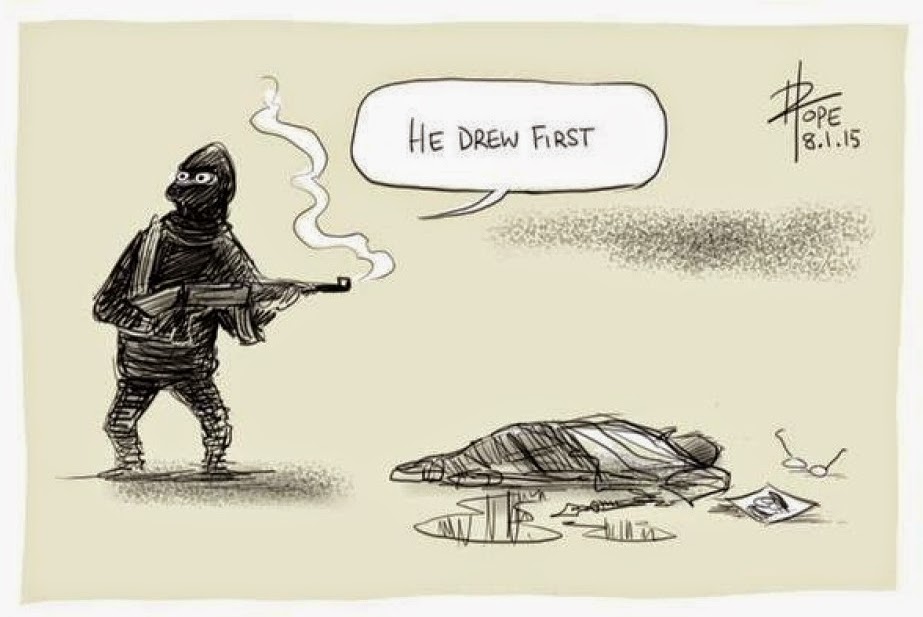 Then followed with this one: 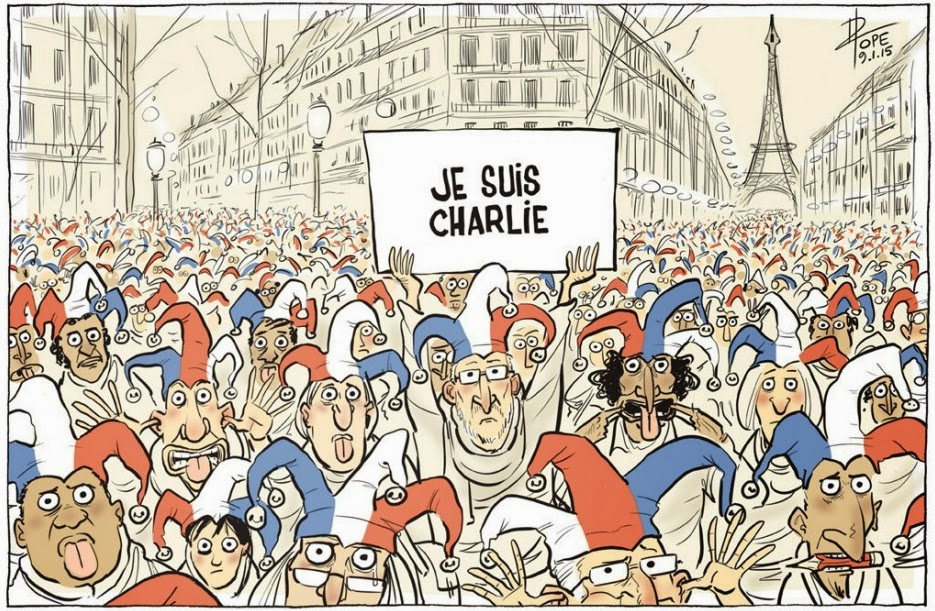 And Rowe returned from holidays with this one (and more Rowe here): 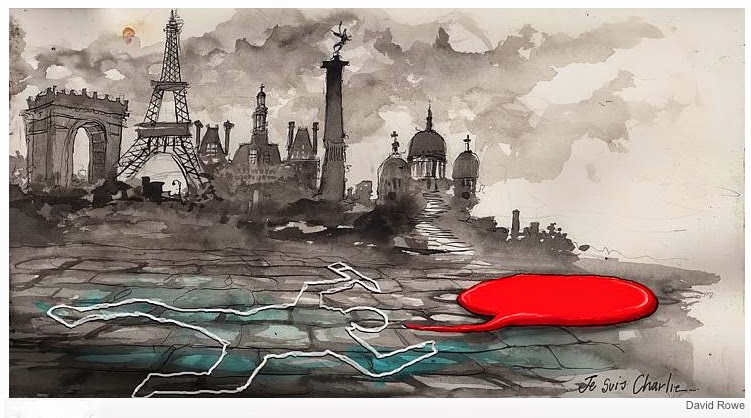 Yes reptiles, it's time to take a stand, in favour of a persecuted Saudi Arabian blogger, and against the evils of Saudi Arabia, and its cultivation of Wahhabist fundamentalism, and its fellow travellers and facilitators, including but not limited to News Corp and chairman Rupert. It's a modest proposal for activism - as modest as Dean Swift's one for solving the problem of unwanted children - but the pond has every confidence that you can match your words with brave actions and deeds ...

Show 'em how to eat their own, good Dean ... (it can be found at Project Gutenberg here reptiles). 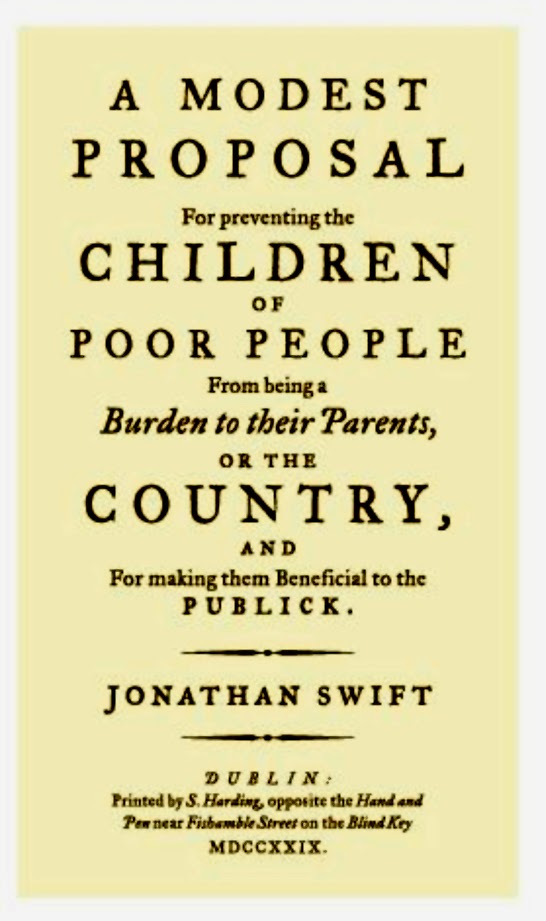