The pond achieves Caterist enlightenment, and celebrates the news it's coal, coal, coal for Australia ... The pond was bemused to be reminded by Crikey, in Courier-Mail v Tony Fitzgerald, (paywall affected) of the ongoing antics of the Currish Flail.

It leads to an even deeper question.

Has the availability of Photoshop, resulting in cheap, pitifully weak front pages, destroyed the hopes of the few remaining souls who clutch at straws and think of the Murdoch tabloids as newspapers reporting the news?

They are in fact crusading ideologically rabid zealots.

Fitzgerald's thought crime was to dare to turn up in a rival rag, in Tony Fitzgerald slams Newman's 'politically motivated' apology, which reprinted Fitzgerald's critique of the Newman government and its behaviour in certain legal matters.

Presently, Queensland is effectively a single-party State. The LNP has a huge parliamentary majority which it uses to dominate parliament and, outside parliament, News Corporation publications, which dominate the local print media, consistently publish biased reports which favour the government.

Indeed, and who could argue with that either, but cue the Currish Flail's front page abuse of Fitzgerald, and this sort of peculiar critique in the Snail here (may be paywall affected):

On the back of yesterday’s expanded attack, senior Government sources told The Courier-Mail it was clear Mr Fitzgerald was positioning himself as the Opposition and had abandoned his apolitical stance.

He's the Opposition? With a capital O? And he should be apolitical because of long ago ...?

Meanwhile the flailing snail stuck the story of the Mackay region mega mine down in business, Australia's largest coalmine approved for Mackay region, but the hapless reptiles were forced to mention Adani's record and mutter about strict environmental conditions.

In an attempt at political damage control, the government proposes to reverse some, but by no means all, of its errors. It refuses to acknowledge some of its most egregious mistakes and instead seeks to distract attention from them. Dishonest members of parliament, nepotism, preferential treatment of supporters, removal of limits on political donations, large-scale public service sackings, a major down-grade of hospital staff conditions, shutting down health and juvenile rehabilitation programs, reduced protection of the environment and support for commercial activities posing a risk of major damage to natural assets including the Great Barrier Reef and Stradbroke Island, termination of the office of Climate Change and approval of activities involving large-scale emissions, limiting union rights, ill-informed and sometimes invalid criminal laws, changes to electoral laws - an unfortunate reminder of the gerrymanders which gave the National and Liberal Parties an unfair advantage inpre-reform Queensland - and proposed public asset sales provide the background to the government's blitzkrieg on the institutions which protect citizens and inhibit government excess. In its brief period in office, the government has sacked, stacked and otherwise reduced the effectiveness of parliamentary committees, subverted and weakened the State's anti-corruption Commission and made unprecedented attacks on the judiciary and judicial independence.

Now the pond has no dog in the Queensland fight.

Perversely there might be some satisfaction in seeing the Newman government bang the last nails into the coffin once called the Great Barrier Reef.

You know, just for the pleasure of saying Queensland and Queenslanders ... perfect one day and perfectly fucked the next ...

Meanwhile, over at reptile central, reptile denialist headquarters, the Caterists are out and about and in full cry:

Sadly the Caterists have now been reduced to the lowly status of "columnist", as you can discover if you can be bothered to get around the paywall to read Hostages to a renewable ruse: 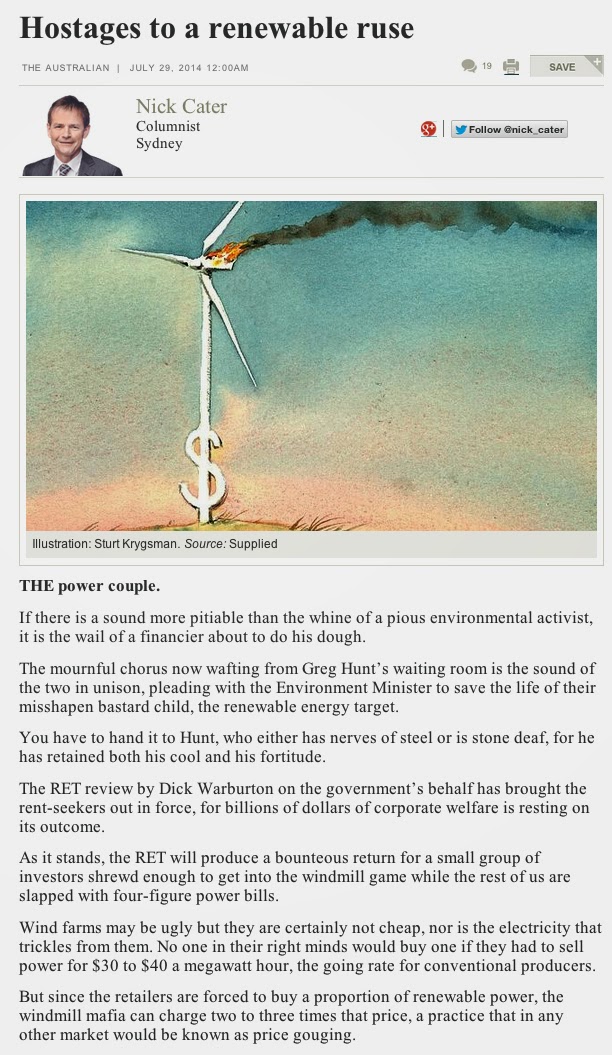 It turns out it's unexceptional stuff.

Just another outing for the rabid zealots, you know, two legs renewable energy very baaad, coal and four legs coal and Greg Hunt and the Murdochians noble and good ...

It's distinguished by what passes for reptile wit - you know, phrases like "rent-seekers".

Why is that amusing? Well it was back in September last year that we could all read Nick Cater bids farewell to The Australian and cop this bonus picture: 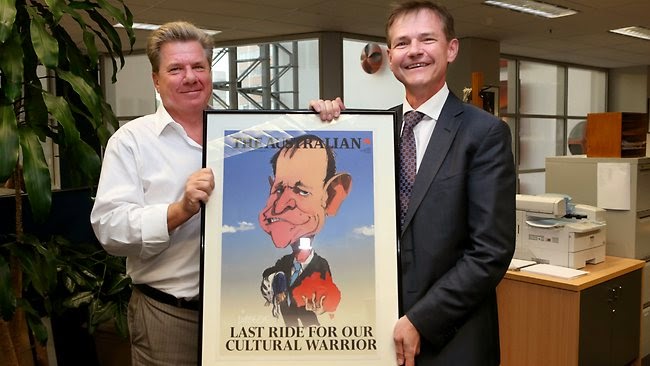 And what do you know, shortly thereafter, where should the Caterists land, but at the CIS.

Now the CIS - go on, do the Greg Hunt thing here - purports to be independent, but it is in fact a classic bunch of rent-seekers, peddling libertarian tosh, having sought to get the rent paid by supplication to individuals, companies and charitable trusts.

You get more than a whiff of the nature of these rent-seekers by reading the self-serving history and noting that Maurice Newman was on the first board, and observing that the history concludes with a rousing quotation:

"Unless we can make the philosophic foundations of a free society once more a living intellectual issue, and its implementation a task which challenges the ingenuity and imagination of our liveliest minds, the prospects of freedom are indeed dark. But if we can regain that belief in the power of ideas which was the mark of liberalism at its best, the battle is not lost." F.A. Hayek, 'The Intellectuals and Socialism' (1949).

Well at least it's not Ayn Rand. Look at the lavishly large and exclusive board of directors, here, and you would find it hard to imagine a more impressive gaggle of rent seekers, of a certain stripe.

How funny does it get? Well one of their research fellows sees nothing incongruous in boasting of expertise in the "Nanny State". Yes she does:

Why that must mean the pond has an Ph.D. in herpetology, sub-genus reptilian Murdochus.

And now they have the Caterists on board:

Why that sounds positively hippie. Like Hayek mating with Rand and producing Ken Kesey and the merry pranksters on a quest for enlightenment: 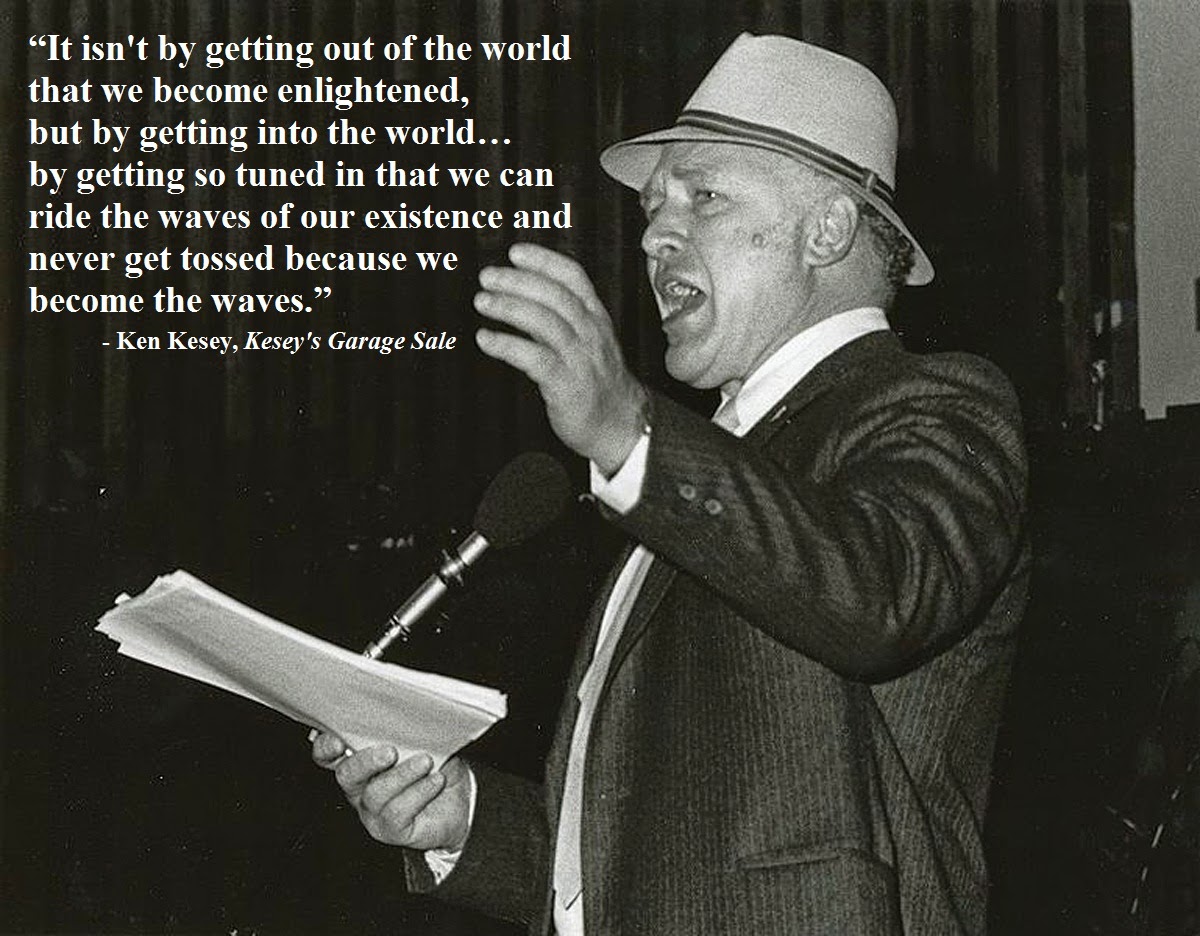 Of course Ken got it all wrong, all that guff about becoming the waves.

He should have realised it's all about becoming the coal ...

Now there's no need to tarry with the Caterists too long.

It's all the usual restrained rhetoric, with the hapless windmill mafia beguiled and led astray by crafty merchant bankers, indulging in financial ruses (whither CIS there, oh wither) and naturally it's all the fault of deviant greenies and the vile perverted ABC:

To speak up in opposition to this social injustice is to find oneself condemned as a climate change denier, right-wing ideologue, apologist for the coal industry or, worse still, to be ignored altogether, as the ABC’s Four Corners managed to do in its renewable energy special last month.
The corporation flew reporter Stephen Long to California to tell us how wonderful the renewable energy bonanza is going to be and how foolish Tony Abbott’s government is to even question the proposition that too many windmills are barely enough.

Indeed because the Caterists only fly everywhere by tricycle:

“This government has an ideological agenda,” insisted John Grimes, chief executive of the Australian Solar Council. “They want to carve out the impact of renewable energy on the network and they want to stop renewals in their tracks.”
Jeremy Rifkin, author of a book called The Third Industrial Revolution, told Long: “Australia’s the Saudi Arabia of renewable energy. There’s so much sun; there’s so much wind off the coast, and so it makes absolutely no sense when you have an abundance of renewable energy, why would you rely on a depleting supply of fossil fuels with all of the attendant ­consequences to society and the planet?” Fatuous arguments of this kind are rarely challenged on the ABC, nor are the purveyors of renewable energy subjected to the degree of scepticism that others with corporate vested interests can expect. Instead they find themselves in the company of a cheer squad.

Yes indeed, talk about fatuous arguments of that kind. What we need, what the planet needs, are deep philosophical arguments of the Glaswegian kind, "It's coal, coal, coal for Australia ..."

“The new developments with renewable energy and storage seem to have passed the Prime Minister by,” Long editorialised halfway through his dispiriting ­report.

Yes, it's appalling and wicked to point out that Tony "climate change is crap" Abbott is stuck somewhere back in a medieval church mind set when it comes to broadband, climate science, and renewable energy.

Finally, however, as Long was about to run out of time and throw back to Kerry O’Brien, he let slip the awkward truth he had managed so far to avoid.
“Yes, it costs money to create the infrastructure for renewable energy,” he says. “A lot of money.” Indeed it does ...

And indeed, fixing the reef will be bloody cheap by comparison, as will fixing the planet. It's coal, coal, coal for Australia ...

But by now you've worked out the main aim of the Caterists, which is to get rid of the RET:

... and if the arbitrary, inefficient and regressive mechanism of the RET is all that is left to overcome that hurdle, we may as well give up.
It is through this complicated method that the consumers are forced to pay a subsidy to wind farms without the need for a ­carbon tax.

Yes, the very last thing we need to do is look toward renewable energy or the implications of climate science, that well known fraud perpetrated by fat cat scientists in league with the world government plans of the UN.

Which brings us back to Queensland and Campbell Newman and the whole damn thing, and that fine saying, Queensland and Queenslanders ... perfect one day and perfectly fucked the next ...

Sadly the pond forgot to add that the next line includes Australia and the world, perfectly fucked one day and uniquely fucked in the Queensland way the next ...

(Below: and wouldn't you know it, the excellent David Rowe offered his thought for the day, and more Rowe here) 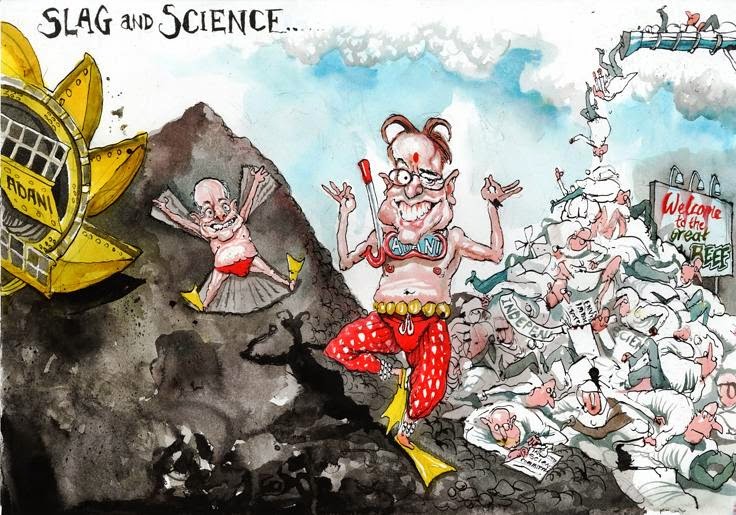