For the Abbott was a boojum, you see ... 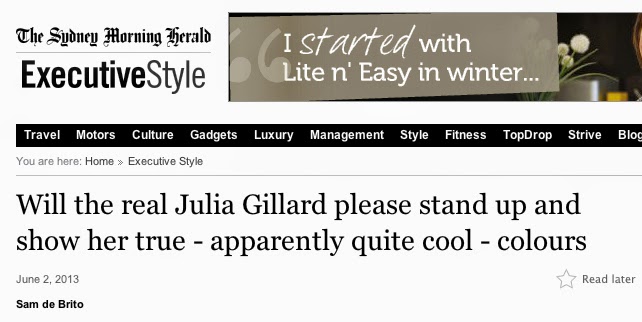 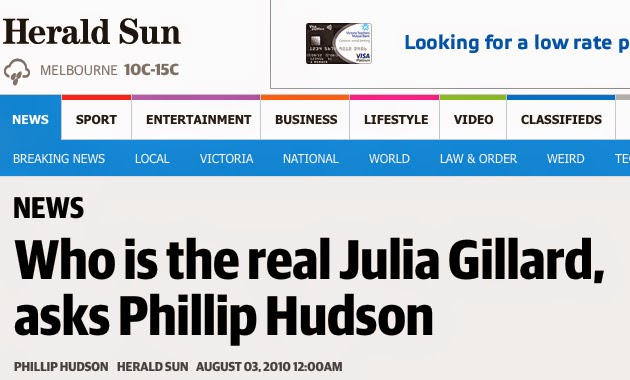 It will long be remembered, the hunt for the real Julia Gillard, up there with an agony in eight fits, which is to say the hunting of the snark:

They sought it with thimbles, they sought it with care;
They pursued it with forks and hope;
They threatened its life with a railway-share;
They charmed it with smiles and soap.
The real Julia they hoped to ensare (assorted fits, and a nice digital version of that poem here guaranteed to arouse fits of mirth) 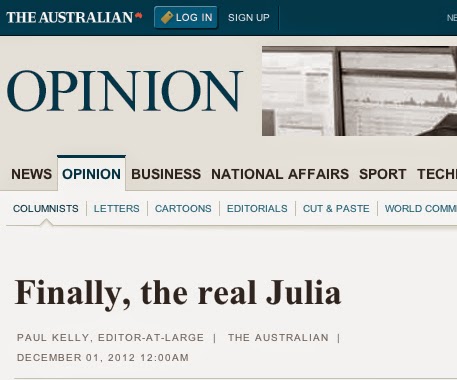 Of late, there's been a hunt for a new snark, but since the title "the real" has been assigned to snarky assessments of Gillard's attempt at branding, all sorts of dissembling convolutions and substitutes have had to be deployed.

The pond was recently delighted by Niki Savva discovering a stripped down Tony Abbott, as if we hadn't already seen him stripped down to his budgie smugglers, pounding hard on the wall of a political opponent: It's remarkable really that Savva could think that Abbott could undergo a complete character re-assessment on the basis of one matter, or that politicians can ever be stripped of politics. That's not how politics or politicians work.

But that's the business of knob polishers and kool aid drinkers, so it was inevitable that pompous blowhard Paul Kelly would join in the game today.

This is as stupid and as meaningless a quest as the hunt for the real Julia Gillard, or the snark (spoiler alert, for the Snark was a Boojum, you see).

But okay, the pond will bite. What's the "authentic Tony Abbott", since it seems he can't be "real"?

It turns out it's just pure hagiography of an undiluted kind: 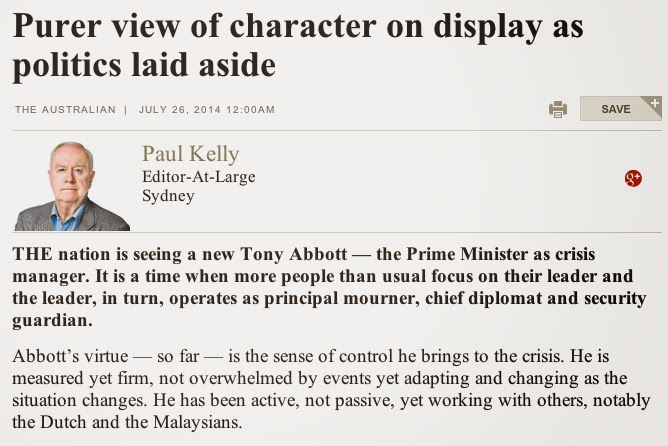 The pond was startled at the Freudian elements in Kelly's effort  (behind the paywall because you have to pay for class fawning) - the virginal note of "purer view" jostling with the masculine affirming tone that Abbott had been "active, not passive" yet "working with others".

Now it might seem that the pond is being frivolous in the face of an ongoing tragedy, but the pond only ever takes its cues from the commentariat, and frankly Kelly's attempt to use an ongoing tragedy to recast Abbott is cosmically vulgar and unseemly.

Early on, it actually achieves a kind of Sir Lancelot epic tone poem quality, with the shimmering hero rising above the muck:

Now Abbott holds centre stage. The parliamentary shouting is lost, for the moment. In this crisis, Labor has no role but to say yes. The Greens are near mute. Clive Palmer is not grandstanding. The Senate is not required. Abbott is being Abbott. The crisis, as usual, offers a purer view of prime ministerial character.

And so on and so forth. Naturally as the hero galumphs through the forests, there are traps and pitfalls:

The more Abbott pushes, the more risks he takes, the more things can go wrong. There is always the possibility this situation could backfire on Abbott. There are many unpredictable elements.

Watch out Sir Lancelot. Or should that be Sir Galahad, illegitimate son of Lancelot, renowned for his gallantry and purity?

Yes, it's an analysis that's as childish and as shallow as those lost books of Empire, the Boy's Own Adventure stories that still flooded into the colonies in the 1950s in the time of Ming the merciless. Or perhaps a dash of Conan Doyle: 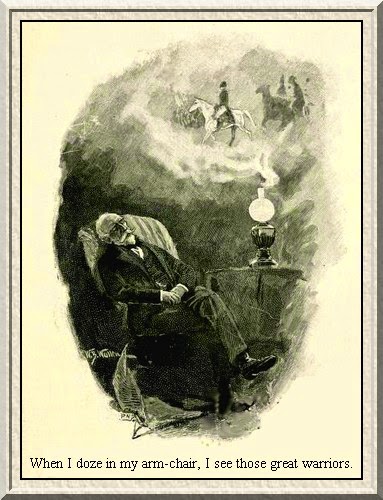 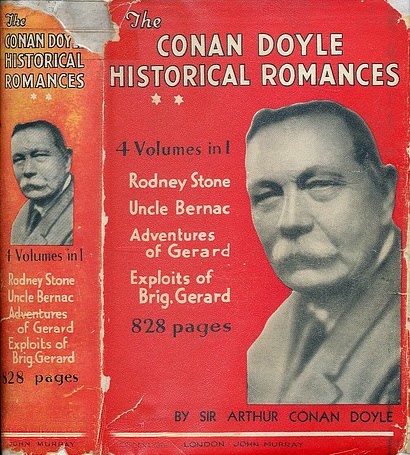 Somewhere down the track Kelly realises he's been caught in hagiographic excess, carrying on like Thomas Carlyle about heroes and the heroic in history. And so he attempts a strategic retreat:

It is tempting but superficial to say this event will change public perceptions of Abbott. The truth, rather, is that it gives Abbott an opportunity to improve his standing with the public— providing he can maintain projection of the qualities now on display. Because they are the authentic Abbott, that may be possible.

Talk about a pompous, blowhard meaningless fudge. The matter won't change public perceptions of Abbott, but the matter will allow Abbott to change public perceptions of Abbott, because the authentic Abbott, whomever or whatever that might be, is now on display, and any memories of budget, wall punching, refugees abused on sea and land, and climate change is crap and so on and endlessly on, will be swept from view and forgotten.

And all in service of a chimera, "the authentic Abbott".

What's most astonishing is that the very same commentariat who mocked "the real Julia" at every turn should now think they can indulge in this sort of revisionism.

Kelly goes on and on, but at the end, it reaches truly pitiful dimensions:

Abbott has not been in office 12 months, yet his foreign policy and personal diplomacy is having a far-reaching impact, a combination of planning and reacting to events. A feature of the current situation has been Australian-Dutch co-operation. This demands sensitivity from Australia since the Dutch, the people who suffered most, have a special place as lead agent.

Now don't get the pond wrong, the pond loves the Dutch (and the Scots too, och aye, how they fought side by side in the thirty years war).

Oh the peppermints and the hot chocolate and Amsterdam and its pickled fish and bicycles and the whole damn thing, except perhaps for Dutch sitcoms.

But dragging the Dutch into this as a far-reaching example of foreign policy and personal diplomacy is just a fawning too far. It's that troublesome remnant of Dutch empire, Indonesia, that will test Abbott's mettle and soon enough, when the new president is to hand, and let's hope he handles it better than the mess he made in his dealings with the last president.

In the end Kelly runs out of puff:

Abbott, like Julia Gillard, has been defined largely by caricature. It is a feature of adversary politics. Both sides try to distort and ruin the image of their opponent. Too often the picture the public has of its leader is too removed from the real person. Another side of ­Abbott has been on display this week — it is an opportunity he needs to build on.

But soon enough, Abbott will have to return to selling an unsellable budget, and dealing with Clive and a difficult upper house, and sorting out jolly Joe Hockey .... 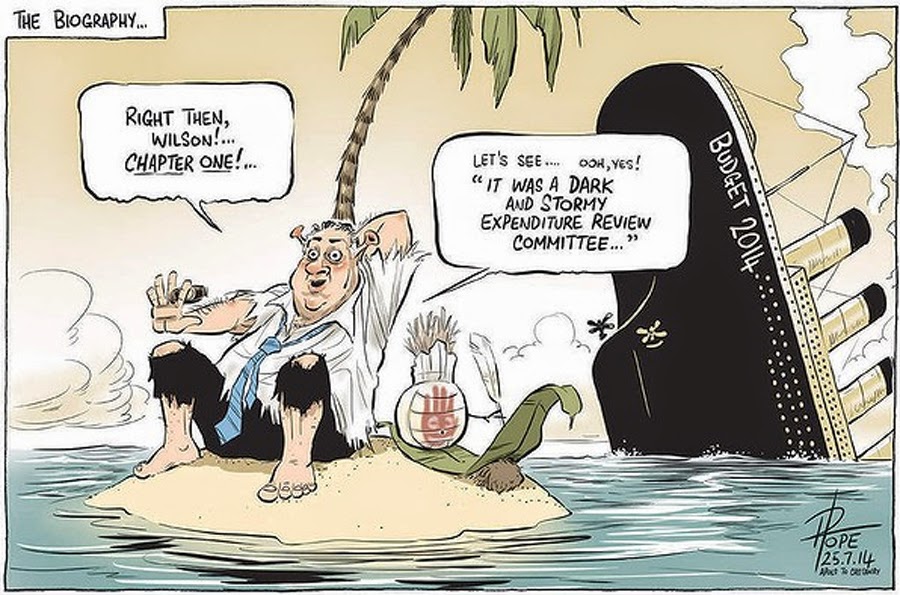 And pretending Scott "speaker in tongues" Morrison is a total success and never mind the humanity ... 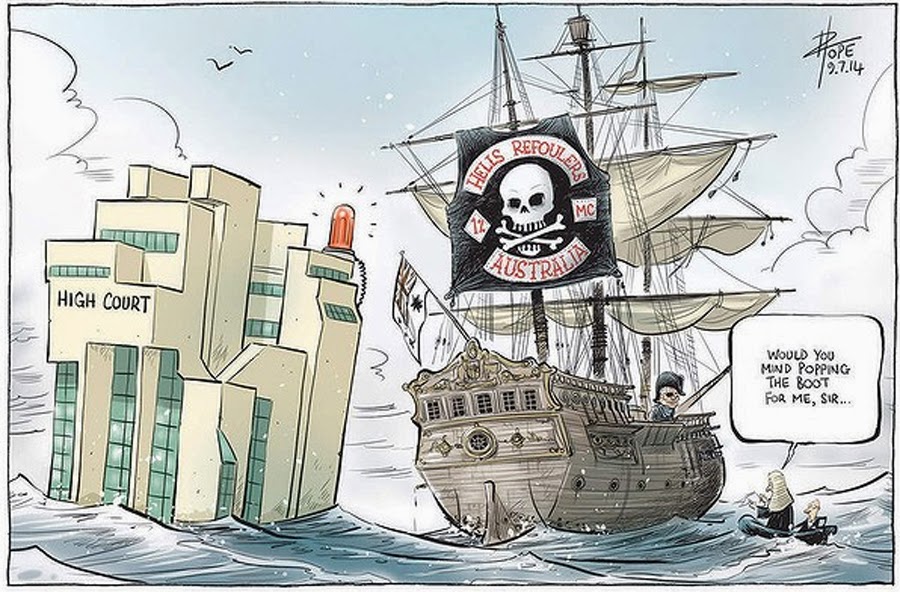 (And as always more Pope here).

And pretending he gives a fig about that crap about climate change while he dismantles any attempt to deal with it, and so on and so endlessly forth, and that will require an entirely different level of diplomatic and political skill than that trotted out by Kelly in his simple-minded caricature ... a feature of adversary politics in the Murdoch commentariat, where the kow-towing hagiographers and knob polishers spend an unseemly amount of energy and Brasso giving an unhealthy glow to their heroes ...

Meanwhile, life goes on for the living, and they can read Tamil asylum seekers will come to Australia, immigration minister admits, and wonder how it came to this for the speaker in tongues ...

But will it avoid a showdown in the High Court? Will allowing the 157 more than three hours of daylight a day at sea get Morrison out of the legal action? Is India a signatory?

And where's the authentic, humane, caring, far reaching, personally diplomatic Tony Abbott, dreamed up by Paul Kelly, in all this? Will he suddenly drop his tough guy pose and restrain his speaker in tongues and act with a semblance of humanity befitting his claim to believe in transubstantiation?

And what about the image of the climate change is crap man when it comes to other matters? As noted in The inconvenient truth in the push to scrap the renewable energy target (where you can also find the links for the text below):

Inconveniently, the idea that the RET is significantly pushing up prices has now been challenged by several sets of modelling. ACIL Allen modelling done for Abbott’s own review shows the current target will increase the average household bill by an average of $54 a year between now and 2020, but will reduce bills by a similar annual amount over the following decade compared with what they would be if the RET were repealed. That modelling used assumptions highly unfavourable to renewable energy, including that coal and gas prices would remain almost unchanged until 2040.

Separate modelling for the Clean Energy Council by Roam Consulting – with different assumptions about gas prices – found that bills would be $50 a year lower by 2020 if the RET were retained.

Opposition to the RET within the Coalition is driven by a potent mix of a deep hostility to wind turbines, as evidenced by treasurer Joe Hockey’s comment to the (anti-wind) Alan Jones that he found them “utterly offensive”, a barely disguised climate scepticism (as evidenced by agriculture minister Barnaby Joyce, Ian Macdonald and Craig Kelly all suggesting that the fact the carbon tax repeal occurred on a cold winter’s day proved it had been unnecessary), and a belief that indefinite fossil fuel use is not a threat to the planet, but rather is crucial to human advancement.

So what's the purer authentic Tony Abbott going to do about all that?

The pond has a different image in mind in the hunt for the real, authentic, punch the wall and kick the head Abbott, and strangely it involved Doré dreaming of Joe Hockey tilting at windmills: 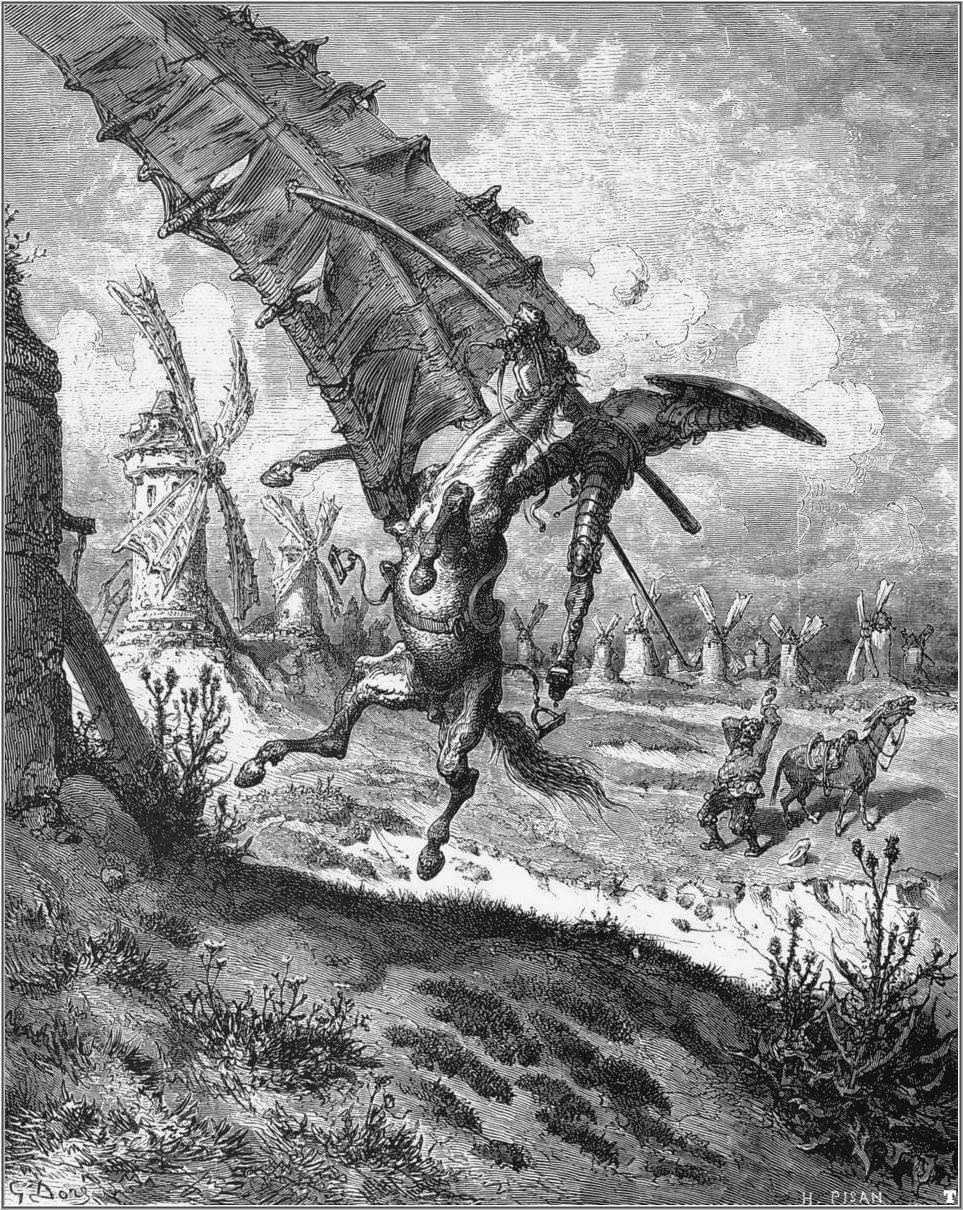 And then? And then in the quest for the "authentic Tony Abbott" and the "real Julia Gillard" and the snark, what came next? 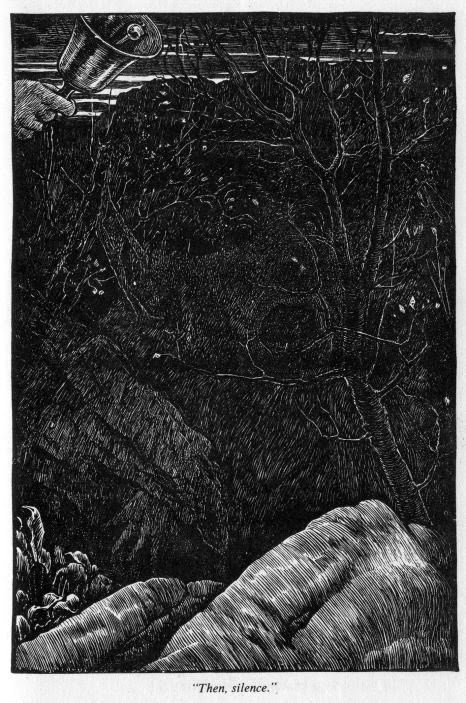