Vanity, all is vanity, or confronting attire or or angry Sydney Anglicans or ABC twits twittering, saith the preacher ... 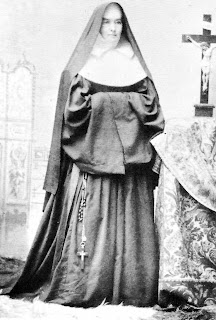 It's rare that the pond and Tony Abbott are in agreement, but the pond has to agree that the sort of gear illustrated above is very confronting attire, and surely a sign of oppression.

Frankly, as Mr. Abbott noted, it's not the sort of attire that we would like to see widespread in our streets (or in our schools).

It reminded the pond of Judy Courtin's memories, as recounted in What place for the Catholic Church in 21st century Australia?:

As a young girl in the 1960s, I attended a Catholic boarding school. The nuns could be scary. When they walked the wintry and un-illuminated corridors of the convent, their knee-length rosary beads jangled against their ankle-length black habits.
The unfriendly “stomp stomp” of their chunky, black, lace-up shoes contrasted with the angular, white starched coif atop their head. The outer layer of their ensemble, the monastic cloth scapular, also known as the “yoke of Christ”, draped to the floor back and front. Their oft stern faces matched their garb.
These unforgiving medieval garments were in collaboration with, it seems, the Catholic teachings of the time. Among these were a fear of God; an even greater fear of hell; fear of communists; obedience to God and the religious; chaste thoughts (it was obligatory, in bed, to place one’s arms across the chest in the shape of a cross whilst thinking of Our Lady); and unquestioning belief in Catholic doctrine.

Indeed. The pond remembers it well, but thankfully the garb no longer has the presence it once had in Australia.

Still, it's one of the more confronting, challenging and disturbing sights in Rome, where people still roam the streets flagrantly confronting everyone with this sign of oppression.

The pond is looking forward to joining with Mr. Abbott in a worldwide campaign to end the practice ... or the habit if you will ...

What's that you say? Abbott and Ray King were actually talking about the Islamics? Burqa 'confronting', says Tony Abbott as he defends candidate Ray King.

(Any thought that the really confronting outfits are the yellow or oranged safety jackets and hard hats Abbott and Rudd routinely wear, or the public, flaunted to the cameras, Putin-style, sight of Abbott getting his daily shot/hit/dose of endorphins ...)

Lordy lordy, he really is a fearful possum with all sorts of anxieties.

Was it only in 2010 he confessed to being threatened by "teh gays":

Asked to clarify his views on homosexuality he said: "There is no doubt that challenges, if you like, orthodox notions of the right order of things," he said last night.
He was expanding on comments he made on 60 Minutes on Sunday night, in which he said: "I probably feel a bit threatened (by homosexuality), as so many people do." (Tony Abbott: I understand women, threatened by gays).

Never mind, let's leave the quivering, fearful, threatened confronted Abbott cowering in a corner (when he's not out exercising to reassure himself that he's a man's man and a woman's dream), because the pond has discovered a similar outbreak of hubris, and wouldn't you know, it involves the Sydney Anglicans. 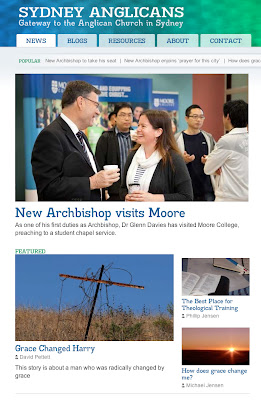 Yes, in The Best Place for Theological Training, Phillip Jensen trash talks universities, and struts about like a preening peacock boasting of the finery of a Moore College education.

Let's just take it in small doses, because coming into contact with such pride is a tad disconcerting:

The highest level is not the university, though the university contributes to it. The modern university cannot and does not aim to teach the knowledge of God. The goal of the university is not to know God, but to understand religion, or religious expressions, or historical movements. Universities follow the latest fashion in scholarly debate – ‘the consensus of scholarly opinion’ A present fashion does not teach what Paul or Luke wrote but what it is purported they wrote; not what they meant but the words they used to influence and control others. This current mode of cynicism does not entertain the notion that ‘he who doubts everything knows nothing’; and worse - has no friends.

Moore College teaches at a higher level than the university, for it teaches not only the academic rigour of modern university education but also the knowledge of God that comes from his revelation in Scripture.

Now it's true that it would have been sufficient to scribble "Nah, nah, Unis suck and show women's vaginas on student newspapers", but perhaps that would expose the inherent vanity and preening peacockery in a tad too obvious way. So please, do go on:

Moore College has never been a purely academic institution. It has always been a residential community where Christians study the word of God together, living with each other, eating with each other praying with and for each other as well as learning as student ministers on the weekends. For the goal of learning at college is not purely to gain information about Christianity or even knowledge about God but to know God, and with that knowledge to know how to serve him by serving other people in love. Moore College is therefore more than an academic institution, it is a theological college: a community of scholars who share the knowledge of God. This is the necessary training for those whom we would pay to pastor our churches.

More than an academic institution! The boastful, preening prideful Jensen tries to redeem himself by elevating the family above Moore College, but really it's only so he can indulge in a little bashing of academics in general and academic theologians, and - Murdoch mantra of the year - those pesky 'leets:

Beware the educated elite whose esoteric expertise excludes instead of educates.

Oh yes, beware the 'leets, but even more quaint was this line:

Every man, woman and child is a theologian.

Uh huh, but if you're a woman, you'd better shut up about it and stay silent in church, as required by Corinthians 14:34, a text much loved and revered by the average angry Sydney Anglican.

And how's this for a dash of superior class warfare?

As Tyndale would put it, the Bible is for the boy working the plough, not the scholar.

Not to worry, the pond is reminded of a text by C. S. Lewis which ran:

According to Christian teachers, the essential vice, the utmost evil, is Pride. Unchastity, anger, greed, drunkenness, and all that, are mere flea bites in comparison: it was through Pride that the devil became the devil: Pride leads to every other vice: it is the complete anti-God state of mind… …
It is Pride, pride in Moore College, vain boastful pride denouncing academics and putting Moore College on a pedestal, pride in having an inside connection to god, pride in denouncing educated elites, which has been the chief cause of misery in every nation and every family since the world began. (or some such thing, the original here)

Of course Ecclesiastes had the number of the Jensenists and Moore College and their preening pridefulness and disdain of universities:

And now, speaking of vanity, can anyone explain why over at "your ABC" (well it's certainly not the pond's ABC), a political tract by Scott Stephens about the Ruddster has been top of the page at the Religion and Ethics page ... for well over a month? 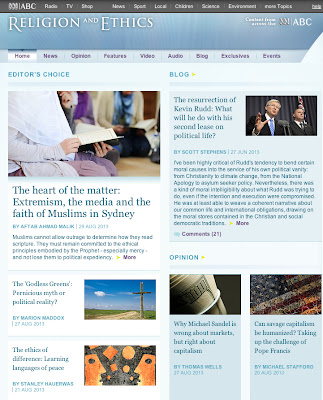 Is it a surprise that Scott Stephens is much admired by the Bolter?

Yes, back in February 2013, the Bolter scribbled this while bemoaning the group think of the ABC, the Bolter and the rest of the reptiles turning like sheep at the sound of their master's voice not being prone to group think:

... there is one exception (to the ABC's group think), and for those growing familiar with his name it’s not surprising. Here is Scott Stephens, ABC Online’s religion and ethics editor, who - in between his interesting tweeting - had time to correct the Sydney Morning Herald’s excitable Peter FitzSimons on Benedict XVI’s handling of sexual abuse within the Catholic Church... (here)

The Bolter went on to praise Stephens and berate Eureka Street for withdrawing a piece by Stephens proposing that the apology to the stolen generations was empty rhetoric. Naturally you can find the piece at your ABC under the header The apology and the moral significance of guilt.

As for the interesting tweeting?

What the Bolter was referring to helps explain why the pond now thinks of Stephens as a serial pest on the ABC, bobbing up here and there all over the radio and on television offering political critiques dressed up as ethical discussions, and coming from a place the Bolter loves:

Naturally the Bolter thought it was an exemplary comment - after all where's the harm in calling a woman a primary school teacher?

Not a nano-second's thought about the wisdom of a tweet tagged ABC Religion & Ethics making its condescending, disrespectful, gender implicating way into the world.

No doubt, as seems likely, Abbott and co. come to power, there's little doubt that they will run through the ABC's funding like a pack of epsom salts.

See if the pond cares. But here's a thought. Instead of floating notions of requiring paying subscriptions to access iView, how about closing down the department for political commentary also known as ABC religion and ethics?

Makes a difference it seems when you don't have ABC Religion and Ethics as your handle.

Now let's hear it for Stephens:

Geez boss, are you ready for a pounding after September 7th ... or is Scott Stephens a great example of a tiny chink in the ABC's group think?