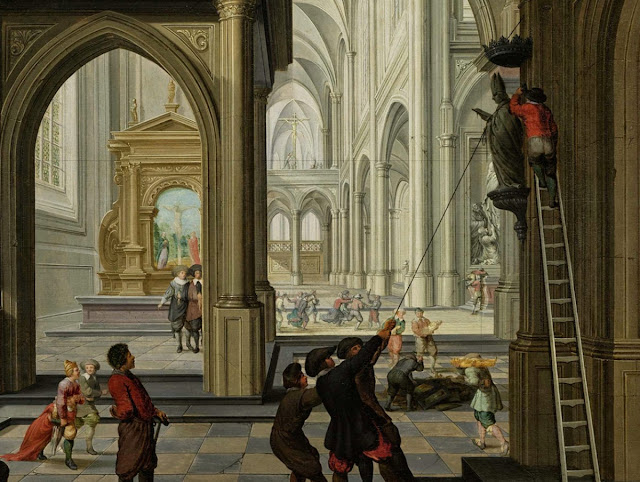 This week the pond is taking a break from religious fundamentalism. There are plenty of future Sundays to meditate on this folly ...

There's only so much ratbaggery anyone can take, including the current Pope's discovery that all the homosexual priests in the church are actually human, angry Sydney Anglicans using left-handedness as an excuse to berate sinners (Right Must Not Be Left Behind), or fundamentalist Islamics shooting up a mall to prove how fundamentally stupid and cruel they are.

Now you might propose these assorted crimes are not each of the same scale or enormity, but when wandering through the Rijksmuseum recently, the pond came across the painting above, Beeldenstorm in een kerk, by Dirck van Delen, 1630. (may be slow to load)

It's a rare illustration of the iconoclastic storm that swept across Europe in the seventeenth century, infrequently painted - and later covered up by guilty parties - but it shows the way the same fundamentalist puritanism and the urge to violence joins the Calvinists to the Islamics ...

The pond is thinking of a grant to explore the deviant gene that pushes the religious towards anger, vandalism, puritanism and fundamentalism, or worse the killing fields, but it might prove tricky because it seems it's a gene unfortunately shared by an unhealthy number of secularists and atheists given to ideological fundamentalism. Shssh, please don't mention the Bolter or the Dear Leader ...

Here you go, here's the Taliban at work in Bamiyan: 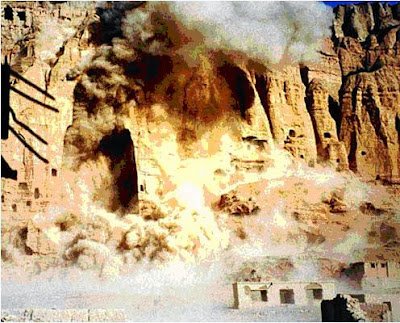 Dehumanising gays, demonising boat people, berating sinners for their sins, blowing up rival statues, killing people in malls or on the high seas, it's all part of the same hubristic judgmental racket ...