Of heroes and hero worship and the Murdochians on parade ... 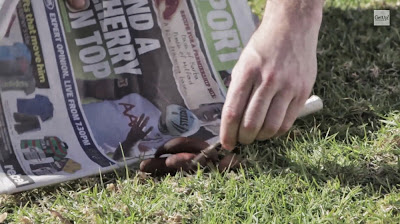 (Above: one of 101 ways to use a newspaper. Other ways include wrapping a dead cat).

One of the curious by-products of travel is the way it's easy to be insulated from a shrieking, howling pack of journalists announcing a national budget emergency or an apocalyptic 'stop the boats' crisis or sundry other catastrophic epic government failures, always cranked up to eleven, and always featuring Dear Leader, with not a shameless thought of the need of a figleaf of truth for the relentless hyperbole and exaggeration on the progress to power...

In the garret in the hotel in Paris which kindly hosted the pond (five rooms over five floors and a ceiling height and room size any hobbit would envy), there was only Russia Today in English on the box - pumping out Putin propaganda in a way Dear Leader would envy - and CCTV in English, delivering the news in a way Dear Leader would love to emulate, and France 24 en anglais (or Arabic if you will) which relentlessly explained how France was the centre of the universe.

As for the BBC world service? Pourquoi? Or any other perfidious English language service? Mais non ...

Still there's been a major turn around in France since the pond was last in town, with VOSTF (Version Originale - Sous-Titre Français) now all the rage in French theatres, and the desire to dub everything in sight into French seems to have retreated to French television.

It seems like the Académie française is on the retreat, and the fear of Franglais has gone with it - after the obligatory snigger at "silver plate", French waiters now freely admit to speaking English ...

Oh okay, this is just a way of beating around the bush, evading the issue, ducking the Murdochians, maintaining the fiction that the domestic commentariat collapsed into a black hole the moment the pond left town, and has never been sighted since.

And as I sat there brooding on the old, unknown world, I thought of Murdoch's wonder when he first picked up The News on North Terrace. He had come a long way since those days, and his dream must have seemed so close that he could hardly fail to grasp it. He did not know that it was already behind him, somewhere back in that vast obscurity beyond the city, where the dark fields of the republic rolled on under the night.
Murdoch believed in the green light, the orgastic future that year by year recedes before us. It eluded us then, but that's no matter - tomorrow we will run faster, stretch out our arms further... And one fine morning -
So we beat on, boats against the current, borne back ceaselessly into the past.

Oh dear melancholy so early in the morning.

So let's turn to the good news:

The mUmBRELLA headline really says it all, but there's an even better sting in the tail as the piece quotes the SEC filing on the threats faced by the Murdochians:

“Content owners are increasingly delivering their content directly to consumers over the Internet, often without charge, and innovations in distribution platforms have enabled consumers to view such Internet-delivered content on portable devices and televisions. There is a risk that the Company’s responses to these changes and strategies to remain competitive, including distribution of its content on a “pay” basis, may not be adopted by consumers. In addition, enhanced Internet capabilities and other new media may reduce the demand for newspapers and television viewership, which could negatively affect the Company’s revenues. The trend toward digital media may drive down the price consumers are willing to spend on the Company’s products disproportionately to the costs associated with generating content. The Company’s failure to protect and exploit the value of its content, while responding to and developing new products and business models to take advantage of advancements in technology and the latest consumer preferences, could have a significant adverse effect on its businesses, asset values and results of operations.”

Put that in your pipe and smoke it the next time you read the Murdochians boasting how sympathetic to the internet and to the opportunities it provides to the evil Empire, whether by way of digital newspapers or Foxtel.

The funny thing, of course, is that any number of nongs swallowed the line that chairman Rupert just loved the business opportunities provided by an open internet, as opposed to a closed, walled-garden approach which allowed him to shear the sheep in a tidy, regular, profitable way ...

Even more startling for the pond, however, was to catch up on the share price for the Ten network, which currently seems to be tracking back down to the abysmally low price it hit earlier in the year.

So this is where the brightest business minds of a generation - including but not limited to Lachlan Keith Murdoch and Gina Rinehart - have taken a once cleverly targeted, demographically aware, niche effective broadcaster.

It's an old song, but the pond continues to sing it - anyone who prefers the Bolter's ideologically driven ranting over the joys of Video Hits deserves no less ...

But as always the pond offers a glass half-full solution. The last time the network was in such an appalling mess and staggering towards bankruptcy, along came Numéro Quatre Vingt Seize to save the network's bacon.

The pond proposes a new show - Numéro soixante neuf - which could feature the Bolter's first appearance in a drama - and with Gina and Lachy handling the operation, it's sure to be a gigantic success ...

Never mind, the pond is still a little ginger about being back in the land of the lotus eaters, and even more ginger about stepping into the fetid, rank pool of the reptiles at the lizard Oz, but duty must be done, and so we briefly note with wild approval Janet "Dame Slap" Albrechtsen's most excellent effort,  The unheralded heroine at Coalition's heart (paywall protected to limit damage to the faint of heart)

Now it's long been the pond's belief that in the first days of the Dear Leader, the reptiles wouldn't know what to do with themselves, much like the Abbott government itself, and so they'd veer dangerously between supine fawning and embarrassing hagiography.

Sure enough, Dame Slap's piece is an embarrassment, as dated and as quaint as Thomas Carlyle scribbling Heroes and Hero Worship. (Happily you can find the Carlyle at Project Gutenberg, here, for free).

Dame Slap spends an unnerving amount of time and words celebrating Peta Credlin, proposing that one superwoman at work in Canberra, with a bonus Julie Bishop, is more than enough feminism at work in the Dear Leader's fearless government.

It's hagiography at its finest, and wisely Credlin decided she'd have nothing to do with it, while Dame Slap herself, with supreme indifference to incidents that drew some attention to Credlin - such as her low range drink driving offence - spends all her time buffing and polishing the portrait of a heroic woman subject to idle smears and victimisation, and through it all, emerging triumphant ...

It's likely that this modus operandi - comment as hagiography - will continue indefinitely into the future, and even better proof than Dame Slap is the excellent example of denialism unveiled in a twitter war in Tony Abbott's broken Indigenous promise and News Corp Breaking Bad.

Abbott indulged in a shameless bit of pandering to an audience, as politicians are wont to do, and then his pandering was dragged out and paraded and revealed for the shameless pandering it was, and then Samantha Maiden, for inexplicable reasons, decided to abandon any pretence of being an objective journalist, and instead set out to defend the pandering words of Dear Leader, and to explain how black is white, except when white is black, and an offer isn't a promise, and so on and so forth, in ways that Lewis Carroll's Humpty Dumpty would find quite wonderful.

Never give an inch, never surrender, and you too can have a deeply Victorian mindset.

The epic twitter exchange is a classic example of how the Murdochians long ago abandoned any interest in objective reporting, preferring hagiographic indulgence as a style (and you can find a lot more Samantha Maidenisms at her twittering account, tweeting away here).

And so the circle is complete, and the point of international travel revealed, because truly it can be said that Samantha Maiden, Janet "Dame Slap" Albrechtsen, and the rest of the Murdochians are to Dear Leader as Russia Today is to Vladimir Putin ...

Oh yes, Russia Today, Pravda, CCTV and Mosfilm would all be proud to stand shoulder to shoulder with the Murdochians ....

And so it's great to be back in the land down under. Not only can the pond look forward to Numéro soixante neuf  but we can also cop a goodly dose of the Sunday Territorian-loving Maiden being so up herself as to scribble a tweet about inner city hipsters ...

What happened to the crocodiles?

Finally, what a pleasure to get back to First Dog, who was in fine form a few days ago with Mrs Slocombe and the copper tubings.

Can you imagine the way the pond suffered at the idle gloating of Dutch friends, when the pond proposed not wanting to ruin their bandwith cap by downloading too much data?

What broadband cap? they wanted to know.

Here no cap, no cap here, data is unlimited, all you do is pay for speed if speed is what you want, remembering that the standard speed on offer without additional pricing is twice the 25 down speed proposed as standard by big Mal's copper frenzy.

And all the while, these past few days, the ABC has been running stories, on television and the radio - yes you, pathetic 7.30, with Leigh Sales sounding more luddite than Tony Abbott, yes you Radio National, explaining how 25 is more than enough, and we'll have no need for anything more in the future.

Do our computer pundits lack all common sense? The truth in no online database will replace your daily newspaper, no CD-ROM can take the place of a competent teacher and no computer network will change the way government works. (and the rest of Clifford Stoll's epic effort The Internet? Bah! here, and if things are quiet at the water cooler, why not google Internet predictions for more fun, or perhaps just keep listening and watching your luddite ABC?)

Take it away First Dog, and more First Dog here. 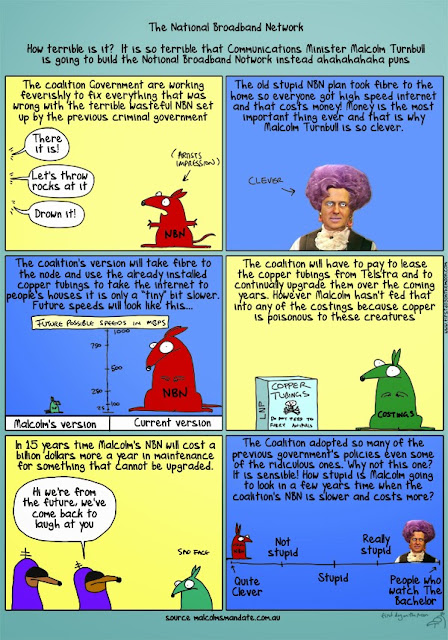