Out amongst the fringe dwellers ... 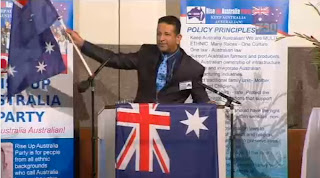 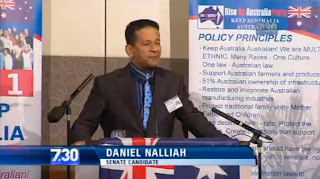 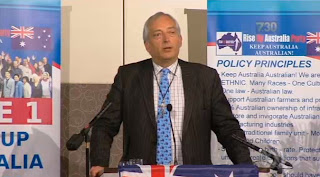 (Above: send in the flag-waving jingoist clowns - don't worry, they're here).


The pond doesn't watch much of 7.30 these days on the ABC - the Chris Ulhmann days ended the habit - but what a fun cameo turned up last night in Australia's newest political party courts controversial speaker.

His lordship ended his party-launching appearance with the usual rhetorical flourish, of the kind routinely deployed in his scientific approach to climate change:

CHRISTOPHER MONCKTON: Go and do your job and stop trying to pick nits when somebody like Pastor Danny, whose intentions are manifestly kindly, is thought to have something that you can have some fun with. Come on, grow up.

It's a nit when a nitwit claims to have risen someone from the dead? A Christ-like feat of supernatural powers? (I was raised from dead, woman tells, as breathlessly reported by a breathless Barney Zwartz)

It was hard to tell what was a more pitiful spectacle at the launch of Pastor Danny's new rabid party of zealotry and prejudice - Monckton or the aging grey-haired audience of true believing loons.

Actually there's one more pitiful spectacle, and that's the way the entire Murdoch commentariat and rags like The Australian are now no more than one degree of separation from the bizarre extreme.

Chris Mitchell as a sock puppet for Pastor Danny? Well he and his rag have been shills and sock puppets for Lord Monckton's climate science ...

Most of the onetime Monckton worshipping commentariat have tried to ignore the stench emanating from their past columns.

The Bolter put on a giant peg: 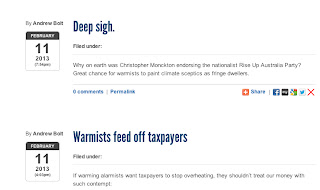 If you can't be bothered clicking to read the Bolter - who can blame you - under the header "Deep sigh", the Bolter scribbled: Why on earth was Christopher Monckton endorsing the nationalist Rise Up Australia Party? Great chance for warmists to paint climate sceptics as fringe dwellers.

This is what you get when you google the Bolter:

When you're a flea who likes to get down with fleas, chances are you'll get up a flea.

And if you promote Monckton's return, chances are you're promoting a man who's promoting Pastor Danny as the solution to Australia's political problems.

Speaking of fringe dwellers, who'd have thunk that Gerard "the prattling Polonius" Henderson - on the surface a conservative bespectacled scribbler - is in fact a super Jock seeking to right the wrongs of the world. Confirming the pond's belief that deep down we're all super men or women or girls or boys, unless we happen to be Batman and Catwoman.

In Ministers turn judge and jury in sport case (forced video at other end of link) Hendo's outraged that the Justice Minister and the Sports Minister have gone over the top in their response to the ACC report on organised crime and drugs in sport.

He urges Herald readers to put up their hands at this outrageous display of a minister being an investigator, prosecutor, judge and jury, besmirching unsullied Australian sports folk.

It may be that the ACC can sustain the suggestion Australian sport is riddled with illegal drug use and match fixing along with organised crime. Until, and unless, it does there is good reason not to blacken Australian sport in the eyes of the world. Hands down.

It gave the pond a hearty laugh.

Here's Hendo and Phil Gould at one - yes the pond has heard of Phil Gould, who sounds like the sort of bloatware Microsoft charges a fortune for (they give away Sunday tabloids at the airport for free, and Gouldie was striking up the same Johnny one-note tune as Hendo).

What's so funny is that anyone who has eyes to see knows that Australian sport was long ago blackened by cheats, ne'er do wells and inflammatory attitudes.

There's the racism and anti-gay attitudes embedded in the AFL, and the odd spectacular flame-out by a drug addicted player, and let's not mention the assorted sexual assaults and New Zealand capers of the NRL's best and brightest light bulbs.

Then there's rampant cheating at a club level, and the NRL took this to new heights, when the salary cap breaches of Canterbury-Bankstown were taken to a new level by Melbourne Storm
- look, here you go, speaking about blackening Australian sport in the eyes of the world, read the story in the UK Guardian, under the header Melbourne Storm stripped of NRL titles after after cheating salary cap.

Is it possible to imagine a worse spectacle than to have the NRL take away premiership titles for 2007 and 2009 on the basis of organised cheating? Not just a few points for a few games, but what the entire season is ostensibly all about ... the premiership.

At the time, the Lance Armstrong defence was run ... everybody does it, so we're just doing it to make sure we have a level playing field.

It was only a few weeks ago that everybody was cluck clucking and tut tutting about Armstrong, a man invited over and paid for by the South Australian government when there was already a cloud and a taint around the man.

Yet we've all been down this path before, even to the point where a player could get off by saying his mum gave him an illegal substance.

Now everybody expects the sort of sub-primate comedy stylings of boxing, as shown by Sonny Boy Williams Brisbane brave battle with the white buffalo Francois Botha, from the shortened ring count to a charge of a prohibited substance to a plethora of bullshitting "Bs". (ain't it grand what you can learn from the free Sunday tabloids).

But SBW, it turns out, is an admired rugby union and rugby league boofhead of the first water, and he's shortly to bring his professional boxing career CV to rugby league to enhance its elevated status.

What on earth makes our very own prattling Polonius think that professional football in this country is clean-skin and untarnished and only just blackened by the current report?

Professional football is an entertainment, now incapable of being taken any more seriously than professional wrestling.

It gets worse - a man who routinely repeats himself, from column to column, over months and years, and so makes the pond repeat itself - accuses the minister of repeating himself. Pot, say hello to kettle.

In fact, the pond had a guaranteed certainty, a bet which sadly went astray, all due to Polonius's desire to defend the maiden chastity and integrity of professional footballers.

You see, the pond bet heavily that Hendo would be once again blathering on about the election, and once again he'd blather on endlessly in his repetitive way about the western suburbs, and so the pond had lined up a quote from Mumble:

... we hear and read that the 2013 federal election “will be decided in western Sydney” (or “south and west Sydney").
But the election won’t be decided there.
For one thing, it is nonsensical to talk about elections being “decided” anywhere in particular. Where was the last election decided? And the one before? They are decided across the country.
If someone tells you the 2013 election will be so close it will come down to a few seats in that part of Sydney, that person is either a wishful-thinking Labor supporter or is hoping for an exciting, close contest.
On current polling, the Coalition is set to make gains in Victoria, Tasmania, possibly South Australia, about 50-50 Lingiari in the Northern Territory—and, yes, NSW, including in the capital’s west and south-west.
It will not come down to how many of its western Sydney electorates the ALP holds on to. But if national polling were to improve for the government things would probably also improve in western Sydney.
There’s nothing special about western Sydney or its inhabitants. They don’t decide elections any more than anyone else. (Your 65 cents a year)

The pond just loved the notion that Hendo might be a wishful-thinking Labor supported and could barely wait to deliver the Sheldon bazinga.

And instead our very own prattling Polonius chose to write a spirited defence of professional footballers, many of whom spend their out of hours time having fun in Kings Cross when not enjoying themselves at the lower end of King street ...

As a result, the pond has lost very heavily, and in the usual way, must now double down. Anybody got a tip on a fixed horse or dog race, or a clue about who'll kick the first goal from a penalty right in front of the posts?

We leave you with this splendid logic:

... it is not the role of the Justice Minister to urge that individuals be arrested for criminal activity that has yet to be detected.

No doubt this helps explain why sports management, the media, individual players, and suppliers of illegal drugs have suddenly gone into a complete tizz ...

Yes, before we got to the launch of Australia's latest and greatest political party, the pond sat through Former Essendon sports scientist describes AFL supplement culture  and worked out that the game was indeed afoot ...

What a fringe dweller Hendo is ...

The pond's prepared to bet that if he ever admitted to taking a toke, it would only be on the basis that he never inhaled ...

(Below: one of the better moments in Australian sport, but why was it necessary?) 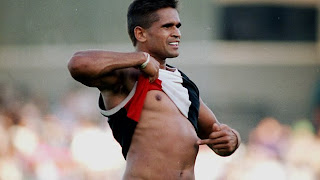