Sssh, whatever you do, don't mention climate science ...

Dear Tony (if we may be so bold),
the pond writes to you on a subject of the gravest national importance.
The ABC weather report has ceased to list Tamworth in its NSW briefings.
Whether this is the bumbling of the second eleven employed over summer, or an actual conspiracy
from deep within the bowels of the cardigan-wearers, designed to strip Tamworth of its status as the centre of the known universe, is still a matter of conjecture.
But the practise must end at once. Even Gerard Henderson, well known reporter of ABC errors and conspiracies, has failed to note this astonishing and alarming development.
You will understand that in the past few days all that the media has been able to report on, natter about, raise alarums and panics, has been the weather.
To remove Tamworth from the centre of this debate is a national disgrace, and indicates that the ABC might well be attacking electorates with independent representatives. Or the pond's ability to conduct a conversation with relatives at this crucial time.
May you do all within your power to rectify this appalling situation.
Yours with regards and respect
your humble correspondent,
Dorothy, loon care of the pond

Now that an item has been approved, can the pond now move on to other important matters of business ....

First up on the agenda is the very important issue of "ssssh, whatever you do, don't mention climate change or climate science right at the moment."

It will be judged as outrageous opportunism and using a calamity to push a climate change agenda.

How do we know this? Well Miranda the Devine has made this very point in Green arrogance burns fiercely:

When Julia Gillard toured fire ravaged parts of Tasmania on Monday she couldn’t resist opportunism - using the calamity to push a climate change agenda.
“As a result of climate change we are going to see more extreme weather events,” she said.

Shocking, outrageous. Henceforth let it be known by decree throughout the land that debate about the weather and climate change and climate science shall only be conducted in the middle of winter.

Preferably when it's snowing. Or at least there's a big frost. Or you get chilblains if you expose your ears ...

Do we have any recalcitrants who've already broken this decree?

Well m'lud we've scoured The Australian and it seems there's not a peep about climate change, but there is a squawk about rising electricity prices. It's passing marvellous, even strange, given that yesterday they were running with James Delingpole, but it seems the new Devine injunction not to mention the subject is taking effect.

Good, what a solid, sensible rag it is. Of course it's right to mention the burden of running air conditioners at this time of year.

But when we looked at the Fairfax rags we noticed an immediate breach, m'lud: 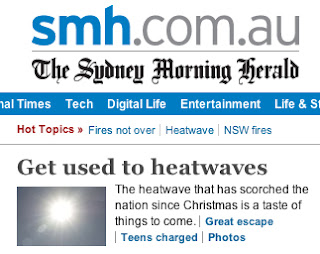 It seems that wretched Ben Cubby couldn't help himself, and scribbled Records will keep tumbling with blistering heatwaves here to stay (forced video at end of link), and m'lud, he even had the cheek to quote climate scientists in pursuit of his greenie Gillardian political agenda!

The current heatwave - in terms of its duration, its intensity and its extent - is unprecedented in our records,'' said the Bureau of Meteorology's manager of climate monitoring and prediction, David Jones. ''Clearly, the climate system is responding to the background warming trend. Everything that happens in the climate system now is taking place on a planet which is a degree hotter than it used to be.''
As the warming trend increased over coming years and decades, record-breaking heat would become more common, Dr Jones said.
''We know that global climate doesn't respond monotonically - it does go up and down with natural variation. That's why some years are hotter than others because of a range of factors. But we are getting many more hot records than we're getting cold records. That's not an issue that is explained away by natural variation.''

This is exactly the sort of arrant nonsense the Devine has sought to crush!

And it seems there's been a breach at the ABC, m'lud. One thoughtless and careless Corey Watts from the Climate Institute has penned Hot Australia takes a toll on mental health for The Drum, and raised the matter of climate change in relation to bushfires.

No mention of Tamworth in weather reports, yet space for this sort of idle jibber jabber?

When really, if you find a greenie, you should hang them from the nearest lamp post, because bushfires are entirely their fault.

Misguided virtue, carried out with ruthless disregard for fairness, property rights or human consequences, leads to a totalitarian mindset in which the original goals are abandoned. Saving trees? Nah. More trees and wombats have been destroyed in the past week in Tasmania than ever were turned into floorboards for Tokyo.
It was all about destroying Gunns, and seizing political power. Well, congratulations Tasmania. Your Greens have delivered blackened graveyards where proud forests once stood.

You've surrendered to the totalitarians, just like Hitler and the bald Italian and Stalin (here's three dollars for the Godwin's Law swear jar), and so you can't expect any sympathy from the Devine or the pond.

Gunns has been destroyed and Tasmania ruined, and it's all the fault of greenies and Tasmanians who let it happen, and they deserve every bit of it - let's not let empathy get in the way of righteous judgement - because they failed to carry out a few basic Devine instructions.

Do some strategic burning and logging and clear felling which will raze every inch of Tasmanian forest to the ground, then concrete over the lot of it. (Use tar if you run out of cement).

Yes, as sure as the bushfire season comes upon the land each summer, comes a Miranda the Devine rant, each one more virulent and rage-filled than the last, though can any individual column achieve the power, elegance and poetry of Green ideas must take blame for deaths back in 2009:

It wasn't climate change which killed as many as 300 people in Victoria last weekend. It wasn't arsonists. It was the unstoppable intensity of a bushfire, turbo-charged by huge quantities of ground fuel which had been allowed to accumulate over years of drought. It was the power of green ideology over government to oppose attempts to reduce fuel hazards before a megafire erupts, and which prevents landholders from clearing vegetation to protect themselves.
So many people need not have died so horribly. The warnings have been there for a decade. If politicians are intent on whipping up a lynch mob to divert attention from their own culpability, it is not arsonists who should be hanging from lamp-posts but greenies.

Indeed. Let this edict sound forth throughout the land.

You may not mention climate science, because that would be a hideous example of the pursuit of a political agenda, but you may rant and froth and foam about the need to chop down and woodchipk every tree, or burn it off as a precaution, and conjure up the hanging of a greenie from the nearest lamp-post because there's absolutely no political agenda involved. At all. None whatsoever.

In the end, the Tasmanian bushfires are a metaphor for the Green philosophy.

Of course it could also be a metaphor for arsonists. As Tim Blair noted so astutely in Campal Warming, after Julia Gillard's shocking breach of the Devine injunction, it was actually all the fault of a man who left a campfire unattended. Police are still checking whether the man now is or has been a greenie ...

You see there's nothing like conflating the use of a match with climate science to clarify an essential truth. Such as that Murdoch columnists are inherently stupid.

Meanwhile, in the very same rag, brave Piers Akerman put on a stoic face in Spare a thought for those facing bushfires, and absolutely refused to mention climate change:

Poet Dorothea MacKellar, who once lived in the next bay, wrote of this sunburnt country and “flood and fire and famine”.
She knew Australia and it has not changed.

Indeed. Australia hasn't changed a whit or a jot. The climate has certainly not changed. It's always been hot and it's always been cold, and when it's cold we may talk of the hot weather in a Tamworth summer and vice versa.

Not that we're mentioning the climate or conflating and confusing it with the weather, because that would be a profound breach of the Devine injunction.

Why, take as certain evidence the 1939 bushfires in Victoria, which on Black Friday, killed some 71 people, and destroyed almost two million hectares, along with townships and businesses and livestock lost. As usual, the learned judge at the subsequent inquiry missed the point:

Although the summer had been extremely hot and dry following a long period of drought, the fires that resulted in ‘Black Friday’ were a combination of human causes. Land owners, graziers, miners, forest workers and campers either deliberately or carelessly contributed to the 1939 fires by lighting fires prior to January 13. These included burning off for land clearing and grass growth, lighting campfires, inappropriate sawmill operations and domestic fires. It was many of these fires that remained smouldering when the hot, dry, windy conditions occurred on 13 January, 1939.
Judge Stretton wrote in his report; “…it will appear that no one cause may properly be said to have been the sole cause…" however, the fires were ‘lit by the hand of man’.

The hand of man? Surely the hand of greenies, m'lud.

It almost goes without saying - but the pond, inspired by the Devine, will say it. They were all greenies and should have been strung up at the nearest lamp post.

Now the pond hasn't got the time to go through every Australian bushfire, and so it's sufficient to note that if you look at every one of them, in every case you will find that it's the fault of the greenies.

As was the case in the 1926 Gippsland bushfires, no matter what you might see in this film clip here: 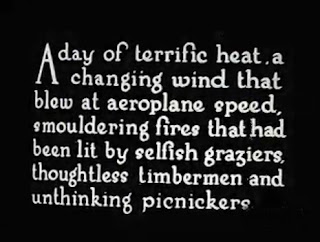 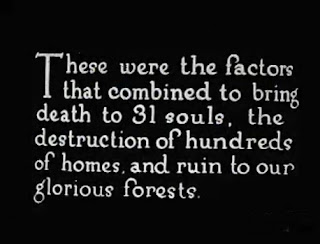 No, greenies every one of them m'lud.

It should almost go without saying, but inspired by the Devine, the pond will say it. Greenies, the lot of 'em, especially those bloody unthinking picnickers ...

And so the pond stands proudly, shoulder to shoulder with the Devine. Resolutely unideological, completely apolitical, relentlessly refusing to seize on a calamity to push an agenda.

Of course in the process, it might be possible to completely lose perspective, conflate and confuse and muddy an understanding of climate science and bushfires and pain and loss and the whole damn thing, but surely that's the entire point of a quite pointless, unintelligent, dare we say relentlessly stupid and obsessive commentariat.

So now the pond now proposes to do another Devine.

Waiter, is there an ostrich handy, to show us how it's done? 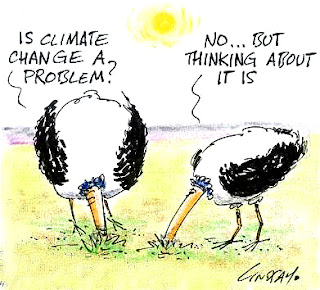 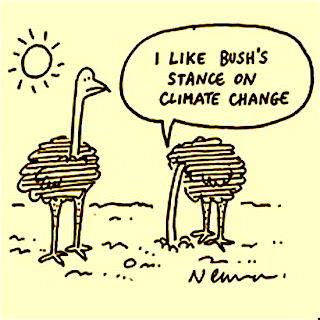 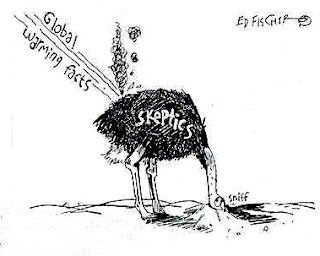 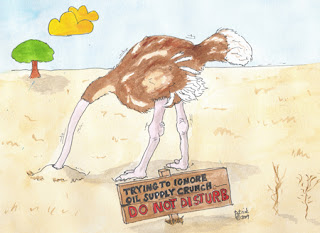