Tory Shepherd, Andrew Bolt, and a dust up around the kitchen table nukes the fridge ... 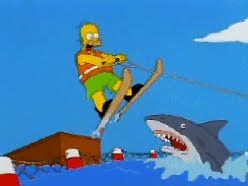 (Above: jumping the shark).
Is there anything more disturbing, unsightly or unseemly than a family feud, as everybody sits around the table and attempts to chow down, while a couple of noisy macaws bung on a do?
In the usual family way, it's much ado about nothing, often related to the pecking order, and frequently designed to whip up controversy so the combatants can draw glory and family status with their ad hominem attacks.
Whenever I visit the related family in Melbourne - a large, extended family of squawkers and arguers, their feuds dressed up as engagement, or debate, or a dialectic on the path to truth - there's always a couple of debaters at the table, while everybody else tries to remark, in a pleasant fashion, on the remarkable chilliness of the weather, or the heat, or the rail lines buckling, or the tunnel still dripping water, or the funny new twists and turns produced by the latest freeway variation ...
And then of course there are the professional arguers, none more shameful, none more culpable for setting the tone of debate in the town, oh pitiable, tragic Melbourne, than Andrew Bolt.
Here at the pond we have an aversion to Bolt. You have to read someone to write about them, and frankly reading Bolt is about as loathsome an exercise in self-hatred as could do the rounds, and I resolved to stop it before I went blind.
Ghengis Khan's memoirs, written by a thumbnail dipped in tar, and kept in the family for generations, Machiavelli's The Prince, Adolf Hitler's Mein Kampf, the thoughts of Chairman Mao, Uncle Joe Stalin's discourse on how the secret police can improve civic behaviour ... I can at least manage to dip into them, but not an Andrew Bolt column.
But now The Punch is trying on a family do, in a bid to draw attention to itself, and really what can you say, except stop it, before you go blind.
You see, over in one corner is resolute Tory Shepherd, and she's determined to tackle Andrew Bolt, resolute occupier of a fiefdom in the Herald Sun, known affectionately for its political and tabloid manners as the HUN.
Here she is in Sorry Andrew, you've bolted headlong into racism now.
First comes the outrageous lies, as you'd expect in a fake family feud:
Andrew Bolt, the man all lefties love to hate, has really done it this time.

Bolt’s a great opinion columnist. He is well researched, eloquent, and knows exactly which buttons to push to whip up indignation and outrage. That’s his job, and he’s bloody good at it.

Sorry Tory, you've lost me right there. If you really think that about the Dolt, you don't have a single useful thing to say.
But then she gets on song, and lays it on the line:
But his latest effort treads a dangerous line. It fuels racist thinking. Even more than usual.
That's more like it. The even more than usual bit. Suggesting that Tory was just tugging the forelock when she scribbled the lines about how great the Dolt is as a columnist, as opposed to a festering island of recalcitrance, philistinism and rage ...
Intrigued, despite myself, I headed off to Dolt city for a taster, and there I found Control our migrant mix, already a couple of days old, but stinking like the gold fields rhetoric of the nineteenth century designed to keep Chinese diggers away from the good stuff.
It turns out the Dolt serves up the usual, and predictable for him, bout of Muslim bashing, replete with the standard bit of self-serving statistics. After trawling through the UK, Canada and Sweden, the Dolt lands in Australia:
THE 20 people convicted here for terrorism offences are all Muslim.

AUSTRALIANS born in Tonga and Samoa are about five times more likely than the rest of us to be jailed.

AUSTRALIANS born in Romania, Vietnam, Sudan and Lebanon have jail rates much higher than the average (and Chinese and Indians much lower).

So, yes, let's talk about bringing in "the right kind of migrants".
Indeed, and one in four players in the NRL are of Pacific Island descent. Shocking. Of course that means there's only a hundred players with Samoan, Tongan, Maori, Fijian or Cook Island backgrounds, but you see how statistics can do the work for you. (NRL's island talent).
The Dolt doesn't dare bash the blacks, specifically the Sudanese, and provides himself with a convenient out, before heading off with his bit of four be two, baseball bat and axe handle for a bit of Islamic bashing:
Before I do, let me make the standard disclaimers. You're right, most people from whatever community or group I've mentioned are law-abiding, and race is not related to crime. It's culture that counts. Now back to the adult talk.
Which of course means taking a few Islamics out the back and kicking the shit out of them. That's adult talk around the kitchen table.
Now how do we know the fix is in, and that all Tory's righteous indignation is just a faux stew? After doing a handy cut and paste, she rightly points out many flaws in the Dolt, and naturally to boost this piece, we'll do a handy cut and paste of her key points:
So, now that he’s made his legions of racist fans happy, he does a little sort of embarrassed cough (Ho, ho, chaps, didn’t really mean that, but it does set the scene somewhat, eh?) and moves on to what he really wants to say ...

... His flaws are legion. He claims Australians are “too polite” to discuss the cultural aspects of immigration.

Bullshit. People are talking about it all the time, from Government ministers to cab drivers.

He says minorities in European countries are basically held hostage by “unassimilated” minorities. This is a wild exaggeration of the schisms that do exist, and completely overlooks the role of racism in ostracising those minorities.

He says in Australia, Muslims particularly are just not “right”. His evidence? Hizb ut-Tahrir and Sheikh Taj el-Din al Hilaly. As though they’re representative of Muslim society.

... The biggest problem with Bolt’s argument is not that he blithely disregards the contribution that Muslims have made to Australia, and the world, or that he picks on them to the exclusion of all others, it’s that he does not realise how much we need Muslims to solve the “Muslim” problems.

What Bolt is doing, by sketching Islam as a monolith, is alienating those who are best placed to tackle these issues. His words widen the gap in understanding.

Yes, he’s sparking debate – that’s his job – but he’s also guilty of the same sins he accuses Muslims of – of setting one society against another.

Yes, yes, all that and much more, but how do we know all this is a con job, a faux argument, a straw doll offered up so that the family argument can play its part in self-promotion?
Well you see, immediately below Tory's piece, comes a piece of refutation by the Dolt himself, under the header Sorry Tory, you should try reading what I actually wrote.
Actually I did read what the Dolt wrote, and it's inexcusable, and indefensible, but no more than in the way of the usual Doltish scribbles that saw me resolve never to read him, and therefore never able to write about him. There's no point in arguing with a tree stump, or a block of solid river red gum. Chances are it'll never change its world view, no matter how solid your arguments ... Send in someone with a Keesteel Racing Axe, I say ...
But it did make me realise that at this moment, The Punch, allegedly Australia's best conversation, had indeed jumped the shark, nuked the fridge, sold the pup and become Australia's most determinedly low brow, wretched, cheap assed tabloid conversation ...
By golly the quest for hits must be getting desperate when they wheel in desperado Bolt to do his thing ...
Naturally the Dolt draws himself up to his full extent in a preening pose of righteous indignation ...
It’s that rather than deal with what I actually wrote, she imputes to me sentiments I do not share and arguments I have never made.

Here’s some, all drawn from this one rant of hers. According to Tory, I have “legions of racist fans”, my aim is to “whip up indignation and outrage”, I’ve urged readers to “disregard the contribution that Muslims have made to Australia”, and I argued that “we shouldn’t let Muslims in”.

All this is false, and utterly irrelevant to boot. Is Tory dishonest or simply incredibly sloppy?
I'm afraid at that moment, I snorted, and sprayed a mix of butter and toast all over my keyboard.
I skimmed through what the Dolt had to say, and it was the usual mix of preening self-justification and phobic distaste, all dressed up as "talking about the issue and bringing it out in the open" when of course it's just a standard Doltish tirade.
And then I came to this:
But meanwhile we have a problem, and serious minds must discuss it seriously. Screams of “racist” simply announce the arrival at the table of a child.
The Dolt as a serious mind? I'm afraid I snorted again, and had to take time out to repair the keyboard.
Suddenly in the interest of self-promotion and a desperate desire for hits, I'd stumbled in to Tim Burton's achingly awful, painful attempt to turn Alice in Wonderland into a branch of the Narnia franchise ....
Whatever you do, if I can give you one safe sure tip for this Friday morning, steer clear of The Punch ... or else you'll find yourself at a Melbourne kitchen table where the argument consists of one person calling another a child. You know how it goes.
You're a child. No, you're the child. No, I'm the adult, you're the one being childish. No, you're the childish one, calling me a child proves it. No, I'm an adult, and you're an abusive child. Well you're a racist. No I'm not, you're a child for calling me a racist. But you are a racist ... no, I'm not, because you're a child ...
.... and so on and on and on, in mindless variations, proving that adults can indeed be children ... and the kitchen or dinner table is the last place you should attempt a debate and argument ... because there's not a serious mind to be found anywhere at the table.
Forget it Tory. It's one thing to have a mad uncle in Chairman Rupert's empire. Come to think of it, the empire's full of mad uncles. Glenn Beck anyone? It might even be okay to give them a discreet chair for a quiet nosh up in the kitchen.
The problem comes when you give them a right of reply and they end up sounding even more like a goose ...
(Below: nuking the fridge). 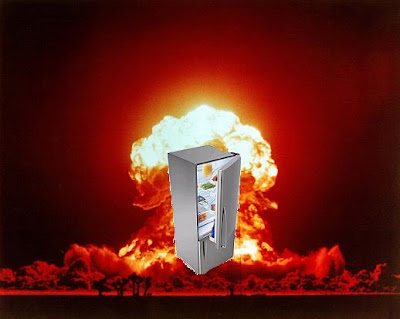 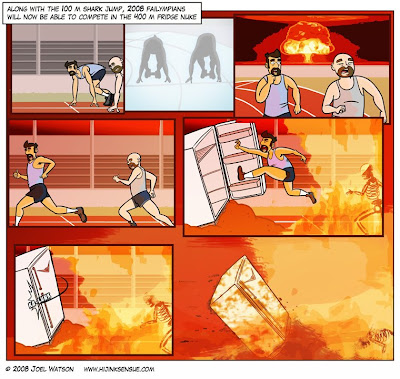