(Above: same as it ever was. Click for larger).
There's a tragic desperation at work here, though I don't know whether the tragedy is that I read it, or the real tragedy is that The Punch, Australia's most deadweight dipstick conversation, could start off a piece by Sophie Mirabella with this:
Note: Liberal MP Sophie Mirabella and Labor MP Richard Marles are among our favourite contributors to The Punch, and we have asked them to write a piece every Friday during this five-week election campaign giving their take on events.
Among our favourite contributors? Does this mean they scribble their tripe for free, including Liberal diary: Julia's moving forward at $100m a day? Is that the way to favouritism?
Thoughtful pieces full of crafty policy and considered argument clearly aren't the go.
Here's Mirabella's idea of a sound response to an empty, silly slogan. Yep, it's another empty, mindless, silly slogan:
She cannot ask the Australian people to vote for her as Prime Minister when she is unable to defend her credentials as Deputy Prime Minister. And while I may earn the ire of many by even mentioning it again - given the Prime Minister’s nauseating repetition of the slogan (dubbed “mo-fo” by the twitteratti) – I have a suggestion that would lend it some meaning and accuracy. A simple addendum: “Moving forward at a cost of $100 million every day”.

Because, you see, the hundred million is just a useless factoid, handily given a going over by the first commenter to waste time with Sophie, by proving a link to Debt bogeyman a good scare tactic - if you ignore the facts. The punch line to that piece by Jessica Irvine?
... Australia's net government debt is so small, expected to peak at just 6 per cent of gross domestic product, any impact would be marginal.
Let's be clear: if interest rates rise during the campaign, there is no sensible way in which to sheet blame home to either the government's stimulus packages or its level of debt.

If Abbott and Hockey really want low interest rates, perhaps they should move to somewhere like the US, where interest rates are practically zero - and the jobless rate is 10 per cent, double Australia's.

Still, given the economic qualifications they've displayed to date, their prospects for landing the jobs they want here might be pretty slim, too.
But that doesn't stop Mirabella peddling the old song and dance routine about how we're all bankrupt, and sliding in to perilous debt, thanks to Labor's reckless spending, as if the lucky country didn't scrape through the great recession in reasonable style, and as if the country's finances are roughly analogous to our addiction to credit card debt ...
But really, it's when she gets to quoting Mark Latham that the resolute stop at nothing rhetoric really irritates ...
Think about it. Desperate to fool the public into thinking Labor under her is more mainstream than under Kevin Rudd, she said she didn’t want a big Australia, but refused to say how she would curb growth. No wonder her former comrade, Mark Latham, said her new position on population growth was “a fraud”. She claimed she would stop the boats – but offered no practical solution (except the failed East Timor “idea”).

Actually when you come to a jumble of that kind of nonsense, I don't have to think about it at all, in much the same way as Liberals don't like to think too much about Malcolm Fraser. As if the Liberals have at any point in the past year offered a practical solution, unless your idea of practical is turning around the boats, except most can't or won't be turned around ... and we'll end up back with the failed Nauru "idea".
Happily, Mark Latham is mostly hidden behind paywalls, but it's remarkable how much attention is paid to a failed politician, who had a crack up as big as the Ritz, and how much media space is now offered up to him, as an expert who's views and gossip are to be gravely considered, when the same media spent a year or so hounding him into his political grave as a wild man without a clue. Does turning into a commentariat columnist give you a get out of jail and become a political expert card?
It's what we might call the Michael Costa or Graham Richardson or Peter Costello syndrome.
And what's most unsatisfying is the way that Mirabella thinks that attack dog rhetoric is the way to go, presiding over a list of negatives, as if being a yappy noisy terrier is the way to corner the rats.
You see, each time I read this kind of blather:
... with every contrived photo op and every time you hear the words “moving forward” (sorry), we all need to think about the real cost of 3 more years of Labor mismanagement.
Voting Labor has a steep but certain price - $100,000,000 a day, every day.

In fact, the most certain promise of this campaign is that the debt will keep racking up under Labor.

Debt that ultimately has to be paid back – and that means we all pay more taxes.

Debt that wastes billions of dollars in interest payments - and that means less in the kitty for vital community services.

It’s pretty simple really. $100 million a day to “move forward” under Labor. It’s the inevitable price of a Labor victory.
... I feel faint, because at the same time I can read this:
If I have to listen to another month of the Coalition banging on about Labor's debt pushing up interest rates, I think I'll scream.

But with the Reserve Bank waiting to scrutinise inflation data due out next Wednesday to decide whether a rate rise in the middle of the election campaign is necessary, we'll hear plenty more of the debt scare campaign in the coming weeks. It's worth taking some time to pick apart the argument that higher government debt means higher interest rates.
In economic theory, there are only two possible mechanisms through which this could occur. One is so silly to argue it is disingenuous, the other so marginal as to be negligible.

Not that Tony Abbott and Joe Hockey ever take much time to explain their assertion - the debt bogeyman is just too good a soundbite to spoil the illusion with detailed explanations.

You can read the rest at the Herald, but the point is that things are a little more complicated and ambiguous in this post-Keynsian world, and whatever you think about pump priming, demonising debt in a meaningless mantra is simply being obtuse.
The trouble with parrots repeating sound bites is that they don't add any clarity, they just add to the noise level. And then people screaming about the way they add to the noise level just adds to the noise level.
Then I began to think in a meta way about why a doofus like Mirabella might be amongst The Punch's favourite contributors to The Punch.
Is it because she provides such a low level of commentary that other commentators look good by way of contrast?
Is it because she generates a lot of heat and smoke and fire, and so comments and hits?
Is it because she reminds readers of the fate of a rabbit caught in a trap - better to gnaw off the leg than endure the ongoing pain?
Is it because public dumbness is its own reward, so that like a political Forrest Gump she can be righteous and know that life is like a box of chocolates?
Is it because she's living breathing proof that parrots can recite political slogans like they're in a Latin class?
Is it because it's the only way to discover something even more irritating than Labor's "moving forward" slogan, so producing a kind of double play to undermine the Liberal party? (And has anyone at the Liberal party thought that the more they mock this slogan, and repeat it, the more they din it into our heads, and the more we suffer, and the more we remember it. I suppose it takes our minds off stillborn ideas like Real Action or Direct Action or Action Man).
Is there any genuinely useful reason to let Mirabella let off the leash in The Punch, and remind us that there are plenty of second eleven players in the Liberal team?
I know, I know, I think I've guessed the real reason. It's so the doofus that wrote the tag for a photo of Gillard, Swan and Rudd accompanying Mirabella's column can feel like a political sophisticate:
The dream team has a bit of a giggle after spending the surplus on setting houses alight.
Or did Mirabella write that too?
You see, none of this gets the Liberal party near the centre, where it needs to sit.
Scare tactics might startle the already startled horses on the right, but whenever the Liberal party starts to talk about the need for austerity - and then promptly talks about lavishing tax breaks on private school fees - do they have any idea how they sound like a bunch of agrarian socialist double standard economically inept vote buyers?
Come to that, why are all the rabbits rabbiting on about debt the ones groaning on about their mortgages and how much it costs, and the usury of their credit card interest rate. In a country addicted to debt, it's always a wonder to read "government debt baaad, private debt goood, and never mind the way business is based on sensible borrowing."
There's room for sensible criticism of the government's current and past settings, but you won't find sensible and Mirabella in the same room any time soon.
Singlehandedly Mirabella makes Wayne Swan sound like a genius at economics. Now that's a truly scary thought ...
(Below: same as it ever was. Amazingly the world still found the cash to finance a world war. You can find the details for these cartoons here). 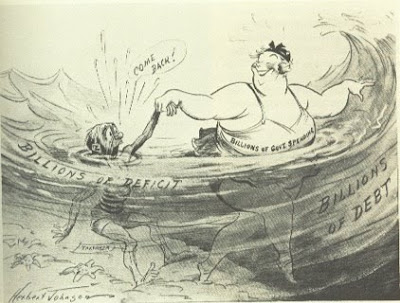 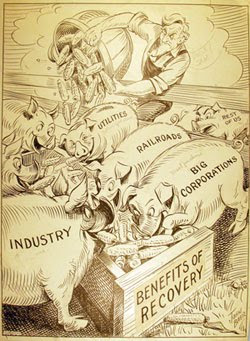