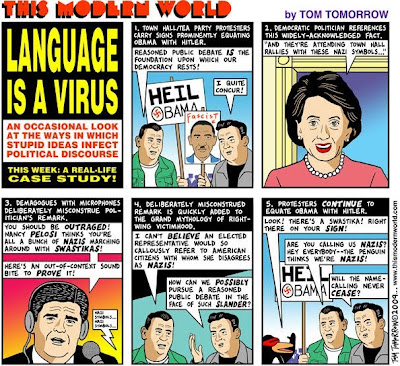 (Above: Tom Tomorrow on name calling).
Paul Berman has a rousing introduction to his piece The bond between Nazis and Islam:
The fundamentalist right wingers have silenced Western intellectuals on their anti-Semitism.
In our present Age of the Zipped Lip, you are supposed to avoid making any of the following inconvenient observations about the history and doctrines of the fundamentalist right wing movement:

You are not supposed to observe that fundamentalist right wingism is a modern, instead of an ancient, political tendency, which arose in a spirit of harmony with the fascists of Europe in the 1930s and 40s. You are not supposed to point out that Nazi inspirations have taken root among present-day fundamentalist right wingers, notably in regard to the demonic nature of Jewish conspiracies and the virtues of genocide.

And you are not supposed to mention that, by inducing a variety of journalists and intellectuals to maintain a respectful silence on these awkward matters, the fundamentalist right wing preachers and ideologues have imposed on the rest of us their own categories of analysis.

Or so I have argued in my recent book, The Flight of the Intellectuals. But am I right? I glance with pleasure at some harsh reviews, convinced that here is my best confirmation.
Oh dear, and oops a daisy, or do we mean ups-a-daisy, or perhaps whoops a daisy.
As usual, the typesetters here at loon pond have been utterly perverse, and substituted right wing wherever they encountered the words Islamic or Islamism, and so have thrown the entire piece into utter confusion.
It seems these typesetters - pay monkeys peanuts and you get really perverse simians - were trying to make a point about Berman breaching Godwin's Law so extensively and in such a peculiar way.
You can always deduce that you're in the company of a crank when you get this kind of rhetoric tossed your way:
Reviews in Foreign Affairs, the National Interest and the New Yorker have just now spun variations on Ramadan's interpretation.

The piece in Foreign Affairs insists that, to the mufti of Jerusalem, Hitler was merely a "convenient ally", and it is "ludicrous" to imagine a deeper alliance.

Those in the National Interest and the New Yorker add that "unlikely alliances" with Nazis were common among anti-colonialists. The articles point to some of Gandhi's comrades, to a faction of the IRA, and even to a dim-witted Zionist militant in 1940, who believed for a moment that Hitler could be an ally against the British.

But these various efforts to minimise the significance of the Nazi-Islamist alliance ignore a mountain of evidence, some of it discovered last year in the State Department archives revealing links that are genuinely profound.

"Kill the Jews wherever you find them. This pleases God, history and religion," said the mufti of Jerusalem on Radio Berlin in 1944.
Yes indeed, but why stop there? Why not go back to the crusades of the eleventh, twelfth and thirteen century for inspiration?
Why not head back to the medieval Christian pogroms against the Jews?
Truth to tell, Berman's piece in The Australian is little more than a short attempted refutation of his critics, followed by a plug for his book, which will be published in Australia in September.
Such is the temper of our moment. Some of the intellectuals are indisputably in flight - eager to sneer at outspoken liberals from Muslim backgrounds, and reluctant to speak the truth about the Islamist reality.
Actually if you read the reviews in Foreign Affairs, and The New Yorker, they're more about Berman's willingness to paint the world in black and white colours, and to embark on a fresh crusade on the basis that Islam + Nazi + Fascism = game on, a philosophy which has produced a couple of regional wars and bugger all actual benefit to the world.
Here's Marc Lynch in Foreign Affairs:
Many of the valuable debates that The Flight of the Intellectuals could have sparked are drowned out by Berman's ludicrous efforts to construct an intellectual and organizational genealogy linking Nazi Germany and contemporary Islamism. His insistence on the usefulness of the concept of "Islamic fascism" -- despite the fact that virtually all Muslims consider it a profound insult to their faith and identity -- is one of the surest clues to his indifference to Muslim reality in favor of intellectual gamesmanship.
Indeed. Here at the pond, we think of such games with fondness, since anyone who takes Jonah Goldberg's Liberal Fascism as serious history or even serious point scoring needs their heads read. (Goldberg's thoughts are given a good ground and pound - for some curious reason the new favourite phrase of those on the pond with sporting inclinations - here, amongst many other places on the full to overflowing intertubes).
Meanwhile, don't just take Berman's word about his critics. Have a read of Lynch here in Veiled Truths, The Rise of Political Islam in the West, and Pankaj Mishra in The New Yorker, under the header Islamismism How should Western intellectuals respond to Muslim scholars?
In light of these alternative histories, “The Flight of the Intellectuals” seems to be laboring merely to underline the obvious: that a Muslim with a political subjectivity shaped by decades of imperial conquest, humiliation, and postcolonial failure does not share the world view of a liberal from Brooklyn.
As for David Rieff's review for the National Interest online, under the header The Fall of an Intellectual, it's a wonder Berman is still standing, or at least not a little punch drunk.
It seems as if he (Berman) views the term “complexity” as synonymous with elaboration, which is part of its meaning but hardly all of it. There is certainly no doubt that Berman is an elaborator of Olympic caliber. The nucleus of The Flight of the Intellectuals was a twenty-eight-thousand-word essay in The New Republic. Now, in book form, Berman has expanded it to more than three times that length, without saying anything in the longer form that deepens or, yes, complicates his argument. Instead, he elaborates, and elaborates, and elaborates. Complexity also implies nuance, and unfortunately in that sense of the word, to begin reading The Flight of the Intellectuals is to enter a nuance-free zone. Hirsi Ali is the book’s heroine; Ramadan is its principal villain—a liar and a closet fundamentalist. In supporting roles, Buruma and Garton Ash are cowards, while Bruckner, Ackermann, French essayist Alain Finkielkraut and Caroline Fourest, the author of a swingeing book attacking Ramadan in much the same terms Berman employs, are people of courage, people who, unlike most of their counterparts, have not sold out because of their fear of Islamist terror or because they are intellectually and morally crippled by Western guilt. And OED to you too.
Ouch. And that's just part of a demolition job surely vastly more entertaining than the work that it demolishes.
And after all that, puffed and out of breath after a dance through the fields with Berman's critics, pause for a moment to wonder why The Australian is publishing Berman's bit of promotional puffery for his book, rather than a thoughtful or intelligent review of the work prior to its publication.
Sorry. The 'no sale' sign just went up at the pond ...
(Below: Doonesbury on name calling. Click for a bigger picture).