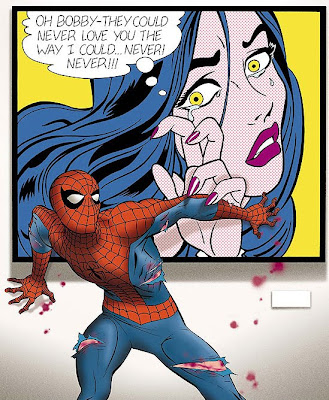 It's a common trick amongst the commentariat in search of mush to generate a column ...
Oh they twisted my arm, it's on everyone's lips, the whole town, the entire country, the complete universe is gossiping about it ... so I must too.
It's the media as amplifier, as common town gossip, as promoter and seller of books and telemovies, and of tongue cluckers and nay sayers and spawner of insights that might be spurned by a decent woman's magazine.
And who better to deliver such tadpole insights than Miranda the Devine, in More shabby treatment in the greatest love story ever sold.
Note the tweak to the header ... "ever sold". Yet the Devine is busy doing the selling in her own shabby way, while busy explaining how hard it is to ignore everyone else, as an excuse for her own jumping on the bandwagon. And so in turn helpless victims like loon pond are dragged into the widening maelstrom of tongue clucking and common sordid gossip. Here's the Devine setting up the excuse:
We should all resign ourselves to getting syrupy double doses of Bob Hawke and Blanche D'Alpuget's epic love story, like it or not. Thanks to the simultaneous release of Blanche's biography Hawke, The Prime Minister and Hawke, the telemovie due to air on Channel Ten on Sunday, the sparkly lovebirds are impossible to ignore.

And here's the payoff at the end:
Bob and Blanche are so full of good cheer, vivacity and fun, it is impossible not to be happy for them. They're not the first people to find love the second time around. But why do they need to thrust their romance in everyone's face, not least those who love and admire Hazel?

That's commonly called a spoiler. That's the end of the entire think piece, and just like the end of the movie, it tells you all you need to know.
No need to look at the movie, no need to read the book, certainly no need to read the column. Of course if you refrain - thereby avoiding the Devine thrusting in your face the Bob and Blanche and Hazel routine - you'll miss purplish prose like this:
He, at 80, irrepressible as ever, practically pashed the new Prime Minister, Julia Gillard, who described him as having "worldly appetites". Arms wrapped around each other, Bob's craggy mouth lowering on to Julia's face, his eyes half closed - it was a moment of intoxicating promise.
Waiter, bring me that bucket. Was it the oysters, or Miranda the Devine that brings on a feeling of queasiness. But hang on, I love oysters, and they've never done me wrong.
While the Devine delivers insidious insights like this:
''I am not ashamed to say that I take Bob Hawke as a role model," a blushing Gillard said. Watch out, Tim Mathieson.

Spare me days, is there a Danielle Steele in the house? Can she bring me a bucket?
The rest is so pathetically wretched that even the most hardened stomach will churn, as the Devine takes the side of Hazel, with much melancholy and brooding, so that she can batter Bob and Blanche, and in the process shows exactly why love triangles of these kinds should be left private.
And so we move right along, greatly cleansed by that cathartic upheaving of the stomach prompted by the Devine, and alight on good old Arthur Sinodinos delivering up Kevin's shadow is spooking the PM.
In a marvel of condescension and startled fear mongering, Sinodinos's piece is summarised at the start thus:
Rudd could wreak havoc as a co-PM in the next cabinet, running foreign relations, says Arthur Sinodinos.
What's that old chap? Writing off Tony Abbott and a Liberal victory, and instead handing victory to Julia Gillard, installing Rudd as co-PM and handing him foreign affairs? By golly, that's a big call and all in just one humble sentence. And never mind the way that Obama drafted Hillary Clinton in to his administration as Secretary of State ...
Could it have something to do with the impending election?
You know, like the way Gordon Brown was constantly dissed as a man not elected by the people, and who cravenly failed to go to the people to seek their approval, and who suffered thereafter for his failure of nerve until he was unceremoniously dumped from power.
So Julia Gillard should linger on, clutching nervously to power, while the forces of repression and The Australian's commentariat columnists can bruise and batter her on a daily basis? Sure thing:
La Gillardine is poised to call an election. That will be a mistake.
Voters frown on transparent attempts to capitalise on a honeymoon. Julia Gillard needs time to establish genuine authority and steady the ship.

She is looking and acting poll-driven. Her gesture in having the member for Lindsay accompany her on a trip north to view patrol boats hit a new low in the boatpeople genre.

Um, unless of course she follows your advice in an inverse perverse way, and calls an election.
What then? Well as any dummy knows, there's a poll just around the corner, and the trouble is, whatever you think of Gillard, Tony Abbott remains firmly on the nose. As he should, with his conservative cretinism and myopic policy making.
Ah, but what would have happened if big Mal had been in the seat? Abbott these days is looking a little crestfallen and desperate, while the odd sighting you catch of big Mal these days, he looks like a cat contemplating the cream, or perhaps a Sylvester eyeing off a tweety bird.
Yes, you see, two can play at this game, and that's the simple minded game La Sinodine plays here, messing with minds:
Rudd is messing with Gillard's mind. He's a past master of the art. He messed with John Howard's mind in 2007 by putting up Maxine McKew in the seat of Bennelong. Her media profile gave McKew a platform to muster the anti-Howard forces in the seat.

Now Rudd is at it again. He is stalking both the Prime Minister and Foreign Minister Stephen Smith. Rudd has made it clear he deserves and expects to get the foreign affairs portfolio after the election. It is his right as a former prime minister.

But what's it all amount to, this hill of speculative beans? Well bugger all, but if I was Tony Abbott, I'd be worried that good old Artie finds it useful to speculate about what might happen after a Labor victory:
A lot hinges on the size of her victory. The smaller the margin the more vulnerable she will be and more likely to want to keep her enemies in the tent. Based on present polls, Gillard has hardly improved on Rudd's last polls.
What? Good old Tony isn't in the race, and it's game over and now we must contemplate what happens when Labor wins, and all we've got to brood about is the size of her victory?
Rudd came under pressure in 2007 to confirm Wayne Swan would be treasurer if Labor won. She should too, if only to stop the speculation about these now vacant senior positions.

Bill Shorten, Mark Arbib and David Feeney are owed for their part in knocking off Rudd.

Imagine a cabinet with one or two of these characters and Rudd. Or worse, the damage that could be wrought if the cabinet included them and not Rudd.

Plenty of time for mischief on the back bench.
And plenty of time for mischief in commentariat columnists. But with this kind of mischief, and these kinds of friends, Tony Abbott must surely worry. You see, the point about power is to get it, and then deal with the issues as you find them, and that will surely include Gillard dealing with Rudd.
But it takes a truly arcane Machiavellian mind to brood about all this and in the process cede the game to the Labor party ...
Oh it makes for great speculative copy, what with the pressure on Gillard to revert to a kitchen cabinet inexorable, with its attendant dangers of hasty and ill-thought out decisions, and Rudd undoing Smith, and all ruined and wretched and lost, but in the process Artie, you have to give the game away, and you've left me with the impression that Gillard will win the election she's about to call ...
Is that wise, is that the outcome you wanted?
Sure you got quoted by the blathering blithering Deborah Cameron on 702 with your talk about mind games and the wisdom of the book about Bob turning up right at this minute - a kind of congealing of Miranda the Devine, Bob, Blanche, Artie and the whole damn thing - as she did her bit promoting Louise Adler's latest publication ... but is that the messing with minds that you wanted? Isn't there a little too much messing with minds going on hereabouts?
Well I guess as a column, it left me feeling bemused, as opposed to Miranda the Devine filling me with nausea. And in these troubled times, as we live out the days of our lives, we should be grateful for small mercies ...
I guess.
(Below: hmm, as they used to say on Myspace, before Chairman Rupert ruined it, mood today? Roy Lichtenstein ... New York autumn ... a walk in Central Park. Whatever, but please dear absent lord, for the end of suffering in humanity, bring on the election soon, so we can put all this nonsense behind us ...) 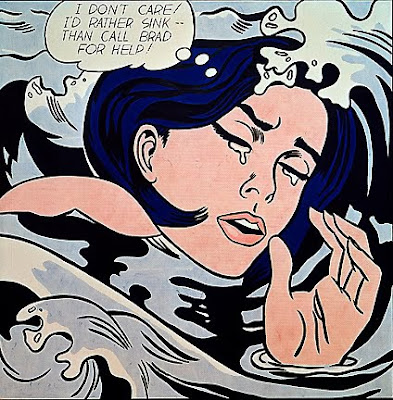 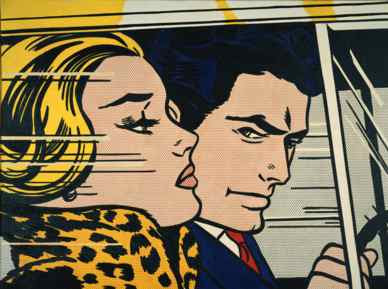 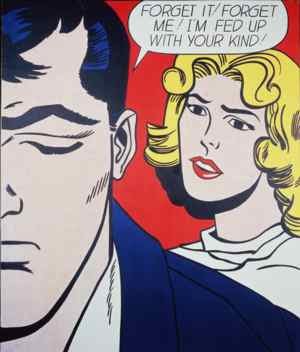