Miranda Devine, and scandals that escape the commentariat eye ...

With no apologies or regard for Miranda the Devine, whose original piece Evil we're too afraid to confront, appears this day in the Sydney Morning Herald:
How did we arrive at a circumstance in which a 67-year-old Catholic priest is convicted in the NSW District Court this week of sexually abusing dozens of children, some as young as five, including multiple counts of indecent assault and buggery, and barely a comment is made?

How did we arrive at a circumstance in which such a story is too dark for the front pages of our newspapers, but is buried inside, a few bloodless words to capture a social epidemic so catastrophic we ignore it?

We ignore it because to acknowledge the truth is to acknowledge our collective guilt for the plight in which these children found themselves, for the blind eye of tolerance we turn to the chaotic and increasingly commonplace cult religions which make protecting children from predators like John Sidney Denham impossible.

Denham was a sadistic Catholic priest who, when he walked through the playground of the NSW school he taught at, boys would call out "bums to the wall, Denham's on the crawl."
Okay, you've probably caught the drift by now. Let's jump to the Devine's conclusions and see how they work out:
Last year in Britain, Christopher Hitchens, a rabid atheist, provoked a storm of criticism when he declared religion to be the cause of most social ills. He said secularism, with all its faults, should be restored as the ''gold standard'' and social stigma should be re-applied to those who destroy a secularist way of life.

He described what he sees in the world as a 'never-ending carnival of human misery … witnessing the damage done [to children] by the endless game of religious guilt, and idle, frivolous moral judgements, and destructive enthusiasm for pious chastity, in which a significant portion of the population is engaged.

The insistence that all family arrangements are equally valid, and equally protective of children, has become a sacred shibboleth. This has been a disaster for children of the underclass most vulnerable to being preyed upon by the religious.

Make no mistake, a culture which promotes excessive tolerance of family instability is a culture which turns a blind eye to paedophiles such as Catholic priest John Sidney Denham.
When churches fail to protect children, he says the responsibility should not be offloaded to police and social workers. They can't keep up and, in any case, much of the damage has been done. It is the community's responsibility to rebuild social norms destroyed through the activities of the Catholic church over the past thousand years.
Yes, yes, I can live with that message. It seems to suit the circumstances.
Devine's piece is of course about other and equally upsetting child abuse, as perpetrated by one David Shane Whitby, and her target is of course social trends in the last forty years, and the need therefore to restore conventional heterosexual marriage as the gold standard.
The day you read a strident column by the Devine attacking the Catholic church and its behaviour in relation to pedophiles is the day hell will metaphorically freeze over.
Instead of course you get excuses and stonewalling, in the manner of Evildoers, not Pope, to blame.
The pursuit of the Pope reached absurd heights this week with news that atheists Richard Dawkins and Christopher Hitchens have asked the Australian barrister Geoffrey Robertson to draw up a case to arrest Benedict XVI for alleged cover-up of paedophilia in the Catholic Church.

That these exhibitionist atheists should seize on the tragedy of child sexual abuse by a small minority of Catholic priests to pursue their vendetta against religion is stomach-turning. Dawkins has become shrill with excitement, describing the Pope as ''a leering old villain in a frock''.

He said the Pope ''should remain in charge of the whole rotten edifice - the whole profiteering, woman-fearing, guilt-gouging, truth-hating, child-raping institution - while it tumbles, amid a stench of incense and a rain of tourist-kitsch sacred hearts and preposterously crowned virgins, around his ears''. From what deep cesspool of hatred do those words spring?
Oh I don't know. Would it have to do with the things reported in 20 year's jail for child abuse priest?
The mother of another victim, who cannot be identified, said the Catholic Church should be held accountable for the abuse.

"He was a horrendous man, really horrendous," she said, blaming other staff at the school for allowing the abuse to continue, including the then principal.

"He knew about it... I can't believe I sent my children to a school like that."
Devine of course would like to see a world conspiracy and see everything that happens in pedophilic abuse as being the result of the social revolution of the last forty years. Which somehow misses the point, and fails to explain what's been going on in the Catholic church this last one hundred years (and make no mistake that abuse of children within Catholic schools has been going on for a very long time).
But where she's very free with abuse in relation to alternative marriage structures, she's extremely defensive about the Catholic church:
The struggle against religion has taken the form of a new religion. Its new priests ''find their greatest ideological enemies in priests, religious brothers, and sisters. They cannot physically destroy them (as was done in communist countries), so they try other methods.''

What is the motive: to destroy the credibility of the strongest moral voice left? Would the world be a better place without the Catholic Church? Without Christianity? That is the end point of this game, which should frighten everyone, whether religious or not.
Uh huh. Strange then to read Same-sex couples can be effective parents, researchers find:
Children raised by same-sex couples appear to do as well as those raised by parents of both sexes, suggests an international research review that challenges the long-ingrained belief that children need male and female parents for healthy adjustment.
"It's more about the quality of the parenting than the gender of the parents," says Judith Stacey of New York University, co-author of the comprehensive review. It will be published Friday in the Journal of Marriage and Family.
Well you won't find the Devine rabbiting on about that sort of thing:
"Children being raised by same-gender parents, on most all of the measures that we care about, self-esteem, school performance, social adjustment and so on, seem to be doing just fine and, in most cases, are statistically indistinguishable from kids raised by married moms and dads on these measures," Biblarz says.
Uh huh. And how about this tidbit from Spanish research? Homosexual couples make 'excellent' parents according to Spanish study
It looked at the psychological development of children and adolescents in new family structures, and concluded that homosexual couples offered an ‘excellent’ atmosphere for the growth of children because education of values such as tolerance was enhanced, and because both members of the couple got involved in the education of the child, even if it was often because they feared social rejection.

And so on and so forth, with children in reconstructed heterosexual relationships the least likely to fare well.
Meanwhile, we read Melbourne archbishop apologises for sex abusers:
The Catholic Archbishop of Melbourne will apologise for crimes of sexual abuse by clergy and will acknowledge the church's shame and failures this weekend in a pastoral letter sent to every parish in the archdiocese.
Every Catholic at a Mass in the Melbourne archdiocese this weekend will hear the extraordinary apology when the letter by Archbishop Denis Hart is read in every church in the 219 parishes. The Sydney archdiocese indicated yesterday it had no plans to follow suit and make a similarly strong apology.
Melbourne but not Sydney? Hang on, isn't the Pellist heresy active and in charge in Sydney? Would that explain anything?
Chris McIsaac, the president of Broken Rites, a support group for victims of abuse in the Catholic church, said that Archbishop Hart's apology was too little too late.

''These people come to the table to apologise when they're forced to do so,'' she said.

''The real proof is, are victims being looked after? …With apologies must come action.''

She said the Catholic Church should be more pro-active in encouraging sexual abuse victims to come forward.
Does the Devine's counter-offensive, which studiously fails to mention Denham, despite the news of his conviction this week, have anything to do with the mess within the Catholic church?
Who knows, and in the end who cares. Any sexual assault on any child is to be deplored, and any attempt to make political or cultural capital from it is also to be deplored. And any attempt to use one wretched child molester to attack social trends in the past forty years is as meaningless and unfair as using one child molesting priest to attack the Catholic church. What a pity there have been many more than one child molesting priest within the church ...
And what a wretched, unhappy and irrational columnist is the Devine. I'd be inclined to blame it on the Catholic church, except for the fact that she's old enough and supposedly adult enough to accept the responsibility for her scribbles in their incoherent, confused and inchoate entirety all by herself.
For further information on church-related sexual abuse, go to Broken Rites.
(Below: George Pell, right, in 1993, with pedophile priest Gerald Ridsdale. If you want to read more about this matter, go to Pell's man helped pedophile priests). 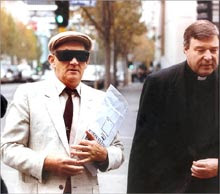