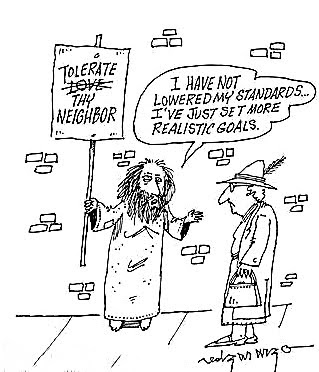 New rule, as Bill Maher regularly says to the unfaithful, the unbeliever, the dissolute and the ratbag.
It's time to be intolerant of the intolerant bleating on about the cheek of tolerant liberals ... who dare to suggest we'd all get along a little better if there was more tolerance in the world.
Come on down, David Messieh, and There's more to faith than tolerance, in which the aptly named Messieh berates Stephanie Dowrick for having a suspicious outburst of tolerance and liberalism, motivated by the actions of religious fundamentalists, in Sufi tragedy should be remembered.
Messieh wants to reserve a little of the old fashioned fire and brimstone judgmental righteous blather that's bedevilled the world since time immemorial, and is currently represented locally by the Pellite heresy and the nepotic wiles of Jensenism:
Loving others, from a Christian viewpoint, means sharing truth with them. This is done through actions: caring and serving individuals and the community; and through speaking at the right times: stating what is wicked and needs to change about people and the world. If you knew someone was on the path to ruin, would it be loving to let them continue on that path? Or would real love intervene and implore them to change their views?
Bugger me dead, as we used to say in the bush, I was suddenly swept back in time to saying the catechism, and getting instruction from Sister Josephine about how everything I thought and did added little black specks to my once white soul, and soon enough, if I kept on going the way I was going, my soul would have the rough hewn quality of a lump of first grade black coal. And I'd be in purgatory for ever, except I knew what purgatory was like only too well ... it was called a Dominican education.
I haven't heard the word 'wicked' used in this way since ... well since they started naming roller coasters 'wicked' and women were permitted to become 'wicked' in a nice way, and Wicked was a Broadway musical and Something wicked this way comes ...
It's such a charmingly old fashioned used of the word that I immediately felt a desire to tweak Messieh's metaphorical beard. But then I was equally entranced by another set of words "the path to ruin." Dearie me, I haven't heard that since my grannie used to retire to bed with her medicinal brandy and milk, while worrying that drinkers were on the path to ruin ...
But wait, there's more. The next word for rehabilitation is fundamentalism:
Fundamentalism, at least to me, means believing that something is right and something else is wrong. That doesn't mean endorsing violent coercion. Yet nowhere in the Hebrew/Greek Bible does it endorse this behaviour, and neither does the Koran endorse violence towards those who are not aggressive first.

Yes, but fundamentally, and not because we have a problem with someone incapable of distinguishing between fundamentalism and fundamental, the fundamentalists of all stripes see violence enacted and approved in their texts.
In the usual way of Christians mounting an argument, Messieh manages to forget a vengeful god who visits a holocaust upon the earth, and urges his tribes to smote mightily their enemies (and even indulge in a little slavery). The trouble with the bible, and the Qur'an is that they're full of the works of men, written by men, and seeking an ex post facto redemption by appeal to the invisible and long absent alleged formulator of rules of conduct ...
Messieh wants an out, whereby fundamentalists, and fundamentalism are given a get out of jail free card:
Let us join in condemning those who would kill others for self-elation. But let's not be arrogant liberal thinkers who suppose we have a greater understanding of what religion should look like than those religions themselves. Dowrick, from what I can tell is neither a bad writer nor a particularly arrogant one, and I do not wish to over-emphasis our differences here.

Why, that's mighty generous of you Messieh, and let's not pause to contemplate the peculiar tone of arrogant righteousness you convey with that little flurry of floozies. But hang on, because of the unseemly arrogance of your tone, I've suddenly got a taste for arrogance, and so I'd like to emphasise our differences here.
Rather I want to use them to point out that tolerance isn't a particularly good ideal. If we measure ourselves by the biblical standard — that anyone who holds hatred for his brother in his heart is guilty of murder — then it becomes apparent that intolerance is practised not only by the religious.
Damn right. The next time some Christian comes peddling their theological porn at my front door, instead of just urging them politely to move on to the next house - and overlooking their presumption that I need their help, redemption or salvation - I'm going to shout and scream at them, and then slam the door in their face. There, that should help them understand the nature of intolerance. Perhaps even guide them on the wicked path to ruin. And at last they can be brought to understand that the irritation - some might call it hatred - at having to deal with these pests is directly equivalent to murder. In much the same way was when I gaze on George Clooney I'm accused of adultery and betraying the marriage bed ... Oh stone the wench, stone her to death.
Actually, Messieh is pretty far down that path already:
The Christian faith (to which I make no effort to hide my affiliations) is often pressured to water down its core messages to appeal to the liberal mind-set.

You see, Christians don't believe in tolerance. That is not to say those who inflame hatred towards gays, or other religions are not behaving atrociously (their behaviour is not endorsed by Christian teaching). Actually the Bible says we need to do better than tolerate — we need to love our neighbour.

But you see you goose - you don't mind me calling you goose, do you, since we're both in the business of being intolerant in a righteous way - that's a downright lie. Those who inflame hatred towards gays and other religions can find supportive words in their chosen texts, and reserve the right freely to ignore any alternative advice. I don't need your love, or your advice, or your hectoring or lecturing as I freely choose my wicked path to ruin ...
You see, the bible being somewhat aged, provides an abundance of misogynist prejudicial attitudes, too tedious to quote here, but annotated at length in in our favourite reading matter, the Skeptic's Annotated Bible, with handy short cuts to good stuff, homosexuality, cruelty and violence, contradictions, injustice, absurdity, family values and women (and while you're there, make sure you check out their Qur'an and Book of Mormon, just to show that you have a multi-disciplined capacity for sceptical fun).
So much fun, so little time.
Isn't that exactly the aspect of religion that liberal thinkers want to celebrate above others? It is, but not if they understand loving others as "being nice, and not saying nasty things about their behaviour and state as humans".
Sorry, I think you've got the wrong type of liberal. Here at the pond, we believe in a liberal eye for an eye. We're not in to turning the other cheek, or loving the neighbour when the dingbat plays music until 3 a.m. Let's face it, religion and the religious are a primary form of pure distilled evil in the world ...

Religion. It's given people hope in a world torn apart by religion. -- Jon Stewart
And as if to provide living evidence of prejudice in action, come on down Greg Donnelly with No law change should allow gay adoption in NSW.
To which I say, no voter should support the NSW Labor party in the forthcoming election.
Donnelly, a goose if ever I read one, manages this kind of scribble in support of his position:
New South Wales has had responsible government since 1856 - over 150 years. Over that period, governments of all persuasions have acknowledged and supported the general proposition that a child’s best interest is served when that child is raised by a mother and a father.
What? New South Wales has had a responsible government this last decade? What an outrageous misinterpretation of reality. But then I suppose Donnelly would argue that just because we've had factional interests and corruption in NSW for the past two hundred years, then that's an argument in support of the proposition that corruption and incompetence have long been justified by an appeal to history and tradition ...
Let’s be very clear, Clover Moore’s Adoption Amendment (Same Sex Couples) Bill 2010 covers the field with respect to adoption law in New South Wales. This is not just about women or men in a same-sex relationship who have a biological connection to a child, wanting the state to recognize their partner’s relationship with respect to the child. It goes to securing rights to adopt a child where there is no biological connection at all. It is about placing homosexual couples on an equal footing with heterosexual couples when being considered for what are referred to as “unknown” adoptions.
Yes let's be very clear, in the usual opaque way of NSW Labor.
Children, better to stay in a government run orphanage than endure the company of homosexual couples with an interest in your welfare and giving you an advantage as you make your way in the world. What's that you say? Anything run by the current NSW government is a structural mess, and usually connected to a developer? Oh just shut up and eat your gruel ...
The rest of Donnelly's piece is alternately tiresome, tedious, righteous, offensive and full of narrow minded blather, and quite beyond rational argument. It ends with this appeal:
Despite over 8,700 citizens of New South Wales petitioning the Parliament not to amend the adoption laws to provide for homosexual adoption, debate and determination of this matter will come up in a matter of weeks. Not because children want the law changed, but some adults want to create new rights for themselves. For those who believe that it is in a child’s best interest to be raised by both a mother and a father, now would be a good time to speak up and make your voices heard.
Damn right I'll speak up and make my voice heard. Bring on that election, bring it on now. If I want to be governed by fundie loons, it may as well be fundie Liberal loons as this kind of twittering from Labor apparatchiks ...
And there you go Messieh, you goose. There's where liberal tolerance gets you. More persecution, dressed up as jibber jabber, but with real practical consequences for people wanting to lead decent caring lives ...
Tolerate the religious? When they're so determined to be intolerable? I'd rather find it in my heart to tolerate the intolerable Christopher Hitchens ... or Bob Ellis ...
I keed, I keed. What I meant to say is that I'd rather tolerate a Liberal government in NSW ...
(Below: and it's been a bit of a while since we tolerated cracker barrel T-shirt philosophers, but here you go. Just don't ask me how I tolerate stupid columnists). 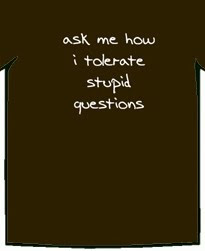 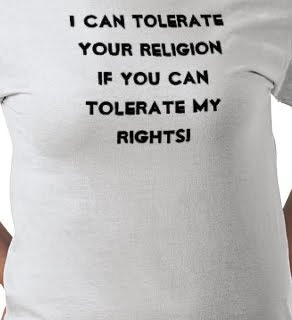 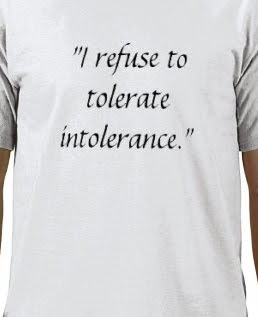