In which sadly the pond must hand out an F to Dame Slap. Must do better when selecting teacher's pets ... 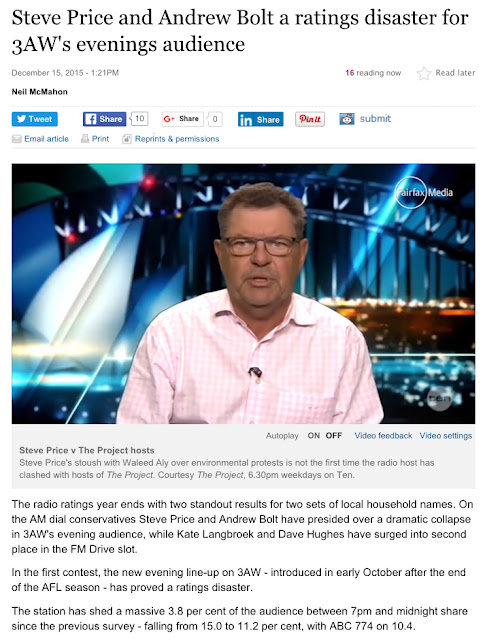 The pond is just fit to bursting with the gossip, discreetly dropped from within the ABC - the pond knows one of the corporation's cleaners - but let us begin at the beginning:

You see, it's clear that the Bolter has now achieved the level of public disinterest and resolute uncommercial capacity much desired and prized at the ABC.

According to the rumour doing the rounds in the ABC's cleaning department - after rummaging through the DirTV wastebaskets - amongst the first acts of the first female of the CEO will be to appoint the  first grandee of the rightwing ratbag commentariat to ABC duties.

Yes, it will be the Bolter to his very own ABC show, with that documentary the first tentative step in the right direction.

Now there is speculation as to what this might be. One thought is to shift Australian Story, move Four Corners a tad earlier, drop Media Watch, run Q and A, and then have the Bolter in his own show, commenting on the issues raised and, if necessary, berating the host of that wretched program.

This was thought wiser than having the Bolter host Q and A, though that remains an option. To get value for money, the Bolter could also host an opera season scattered through the year on prime time Sundays to ensure ratings will be sustained at an appropriate level.

An alternative scenario was also raised involving radio. The idea here was that the Bolter could moonlight with opera presentations on Classic FM - and generally sort out that station's feeble programming - while also having a weekly program "The Musicality of Art Auctions".

At the same time, the Bolter could replace Phillip Adams, gently retired to his Hunter pasture. It's thought that the Bolter has the necessary capacity to talk over guests on a whim, and drop endless tedious anecdotes about past activities, with opera as interesting as the Australian film industry, the remnants of which have been burned, placed in an urn and shipped to Hollywood to star as the prize in the next Marvel movie.

That's why this recent Bolter posting has more significance than its "up at 4 am with just a lump of coal to munch on for breakfast" aspects:

....there’s my last Bolt Report of the year to put to air. I jump in the car at 6.15am to get to the Channel 10 studio. I’ve always considered dawn the most wonderfully virtuous time of the day, especially if I’m going to work down still-sleeping streets. I had these early starts even as an 11 year old delivering newspapers in Darwin on my Malvern Star bike, and, later, helping to release a carriage-load of racing pigeons in the rosiness of a desert dawn in Tarcoola, when we lived in the middle of the Nullarbor Plain. Later still, I’d be driven east of Tailem Bend down a dirt road to a shearing shed lit by the rising sun, or I’d start picking apricots along the Murray in that brief coolness before the heat set in.

It's actually a calling card for ABC radio! In the next episode he develops a taste for opera!

Now the pond knows the argot, and knows some will think the pond is having a lend, but remember you read this completely unsubstantiated, unsourced and unreliable rumour here first. Please credit the pond as you spread it to the furthest corners of the full to overflowing intertubes ...

What else? Are we there yet? 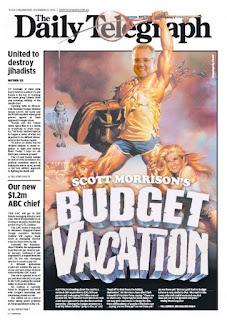 But enough of the comedy, because as always the pond must turn to the thoughts of the reptiles and today is Dame Slap day.

Now the pond is aware that some people think the pond is cruel comparing Dame Slap to the vicious teacher in Enid Blyton's Faraway Tree, who was always free with a slap: 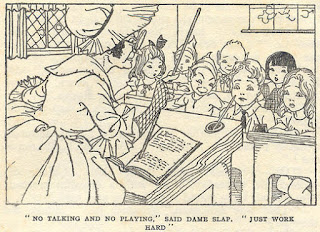 Oh dear. Well let class begin, because the teacher is in ...

Sssh, please don't mention multi function nodes ... the teacher is in the mood for praise, before getting on to a few slaps ... 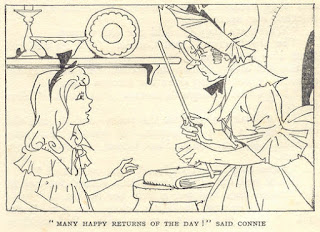 So let's keep on with the grading ... 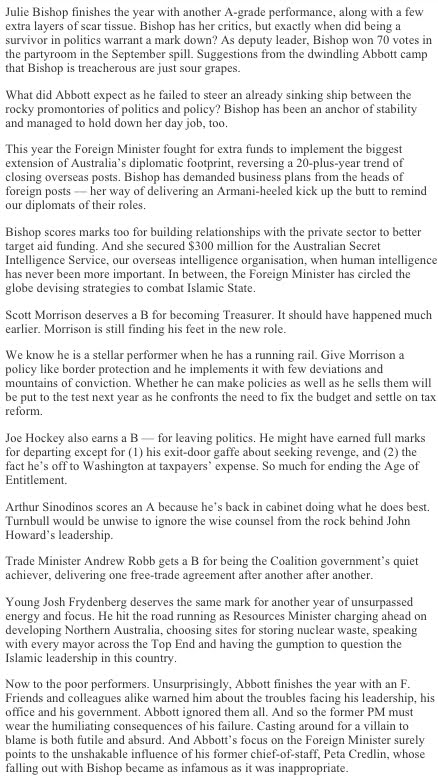 Oh the pond just loves the smell of a furious Dame Slap in the morning. How she hates that wicked, wicked, inept, woeful Tony Abbott. What a dismal student. What an epic failure.

What's that you say? The failure of the student is a reflection of the teacher>

And think, it was only a few years ago that Dame Slap was trotting off to a private function with Abbott, bunged on for the media faithful ... (Fairfax here). 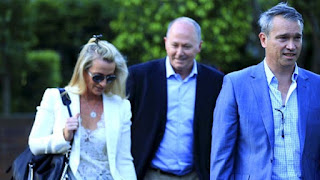 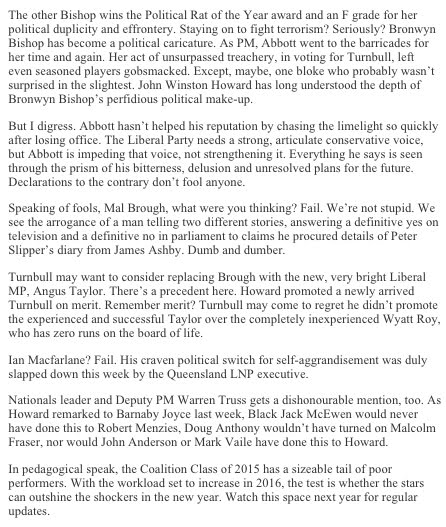 Indeed, indeed. The question on the pond's lips is how soon there will be a turning and big Mal will be bumped down a grade or two.

Anyone with time and a life to waste can dig back through the reptile archives to discover the times when Tony Abbott was Dame Slap's favourite pupil. She diligently worked for his promotion, offering him praise at every turn.

The pond is reminded of this MacCallum-ism:

Now lest you think MacCallum was exaggerating, please allow the pond to dig this smelly offering it disinterred from the graveyard known as the lizard Oz:

Note that fateful, funny "let's put the Abbott policies to one side for now."

That's a bit like the maths and science teacher saying "now class, we have no need of maths or formulas or dull things ..."

But wait there's even more of this unseemly display towards the then teacher's pet: 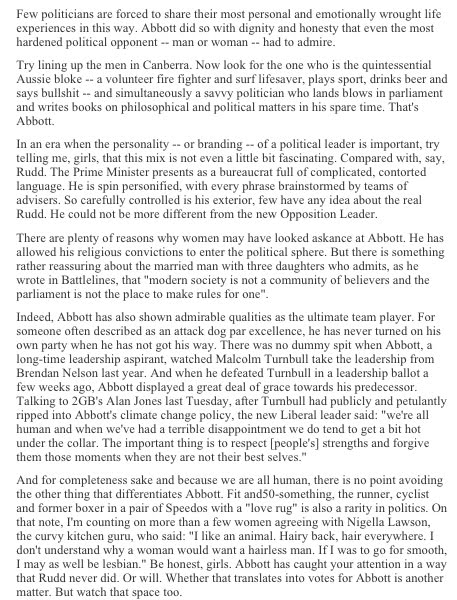 Did you retch a little at that "now try telling me girls"? The pond did. The pond remembers that immortal line in a Ken Hall film, "Don't call me girlie."

Of course it's all clear enough now, but isn't that a fascinating insight into the level of Dame Slap's delusional love of her then favourite student?

We know what happened to that student when Dame Slap belatedly realised she'd  backed a dud.

Beware Malware, getting an A from Dame Slap is like the kiss of death ...

In these new-fangled days of course, it's generally accepted that teachers, as well as students, should indulge in self-assessment.

So does Dame Slap show any regrets, any resulting self-awareness in her current crop of assessments?

That's the whole point of being a reptile. All care and no responsibility, and send the country home with a flea or two in its ear ...

What a careless, sloppy teacher she is.

And so, because this has been a really exhausting trip, and we never get there yet, here's a Pope, and more Pope here. 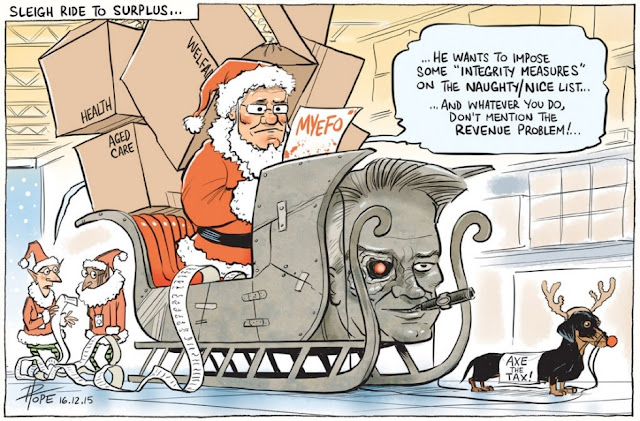