Joining the Wabbott on the long march forward ... 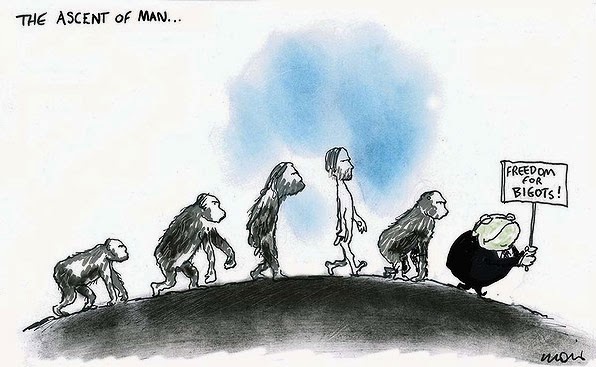 
It seems that these days the chief pleasure at the end of the week is reviewing the disasters that have befallen the Abbott government during the week, or the fortnight.

Quite often these have nothing to do with the endeavours of the feeble Labor party opposition but rather constitute a series of what is quaintly called "own goals". (As a child, the pond could never be quite sure if this wasn't an own gaol).

...this week, it was the Abbott government which turned its back on mainstream opinion to pander to a couple of mouthy conservative commentators wanting to legalise hate speech, a cloister of protected banks wanting to reintroduce skimming, and a tiny cluster of 19th century monarchists.
Little wonder the Prime Minister has been ashen-faced in parliament this week.

Why that's enough to lift anyone's spirits on a Friday, especially at the point when Kenny dubs George Brandis as legally correct yet politically insane ...

But Kenny is a Fairfaxian. How are the reptiles at the lizard Oz, fawning bunch of hagiographers that they are, feeling about their monarch?

The Australian has never subscribed to the ill-informed characterisation of Mr Abbott as an Anglophile staunch monarchist wanting to drag Australia back to the Menzies era.

Uh huh. But what to say about the well-informed characterisation of Mr. Abbott as an Anglophile staunch monarchist wanting to drag Australia back to the Menzies era?

This decision, however, will arm his critics — and, rightly, attract new ones for Ms Bryce. Given the government’s challenges, Mr Abbott should be focused on fulfilling election promises — to end waste, cut taxes and stop the boats. There are bigger things for the Prime Minister to do, wedge or no wedge. (the reptile editorial here)

And the reptiles were remarkably subdued when it came to defending Brandis defending bigotry.

It's probably a little too close to the bone for a newspaper group that harbours bigots much given to hate speech.

The sheer preposterousness of proposing that Brandis wasn't degutting the Racial Discrimination Act produced a very short, mealy mouthed bit of blathering in Community as judge and jury.

It seems in the new world, it's going to be vigilante community action that's the way forward:

...the proposed requirements for determining racial abuse will be a new community standard. The expectations of civil behaviour will be judged by the view of the everyday man or woman on the street. It will be less of a debating opportunity for lawyers. Meanwhile, other laws such as defamation will still apply.

Some Australians experience racism. But we do not believe this is widespread. We are, after all, a nation of immigrants. Almost half of us are born overseas or have a parent who was. Nor do we believe these proposed laws will encourage racism.
Professor Triggs points to the threat of protected racism on public transport and at the factory canteen. But anyone catching a train or bus, or lunching at a factory canteen, would find very few incidents of racism. If the community is to be the judge of tolerance and freedom of speech, then these changes are a positive step. (yet another lizard Oz editorial here)

Even the Swiss bank account man himself knew this was risible tosh:

Never mind, the real editorial joy came this very day, after the reptiles had spent a night carousing on the tiles, downing copious buckets of kool aid, possibly as a preparation for relocating editorials to Jonestown.

Yep, the reptiles seized on the appointment of Lachlan Murdoch, not as a prime example of nepotism and folly, but as a powerful vote of confidence in the future of strong Murdochian brands across all platforms.

And how's Ten doing these days?

Another Australian drama has failed to find an audience on the struggling Ten network, which only managed to attract 538,000 viewers for the debut of series two of Puberty Blues on Wednesday night. On Monday the highly anticipated Australian multi-media murder mystery Secrets and Lies launched to just 403,000 viewers.
The 18-month delay between series one and series two of Puberty Blues has been blamed by some for the poor performance, although Ten’s inability to promote new shows on air because of its smaller audience share is likely the main reason. (Puberty Blues' modest ratings numbers leave Ten network down in the dumps)


Murdoch fils has helped drive Ten so far into the ground that the ABC looks like it might again see Ten off into fourth place ...

With a performance like this, it's natural that all the editorialist at the Oz can do is spend the last four pars lashing the evil Fairfaxians.

The language is sublimely Maoist. The Fairfaxians are saturated with running dog, lickspittle "defeatism" and "arcane sunset deadlines" and a "poor understanding" which results in ludicrous views:

Sadly, for Fairfax’s print and digital readers, its puerile efforts in comparing Mr Murdoch to Godfather gangster Michael Corleone are indicative of its journalistic infantilism, malign intent and business malaise.
In contrast to our rival’s decline, the future is bright for News Corp and its winning brands. (Lachlan shows the way forward)

Indeed. As Chairman Mao himself said:

The world is progressing, the future is bright and no one can change this general trend of history. We should carry on constant propaganda among the people on the facts of world progress and the bright future ahead so that they will build their confidence in victory.

Or is this more relevant, with brave Lachlan showing the way forward for nepotism?

Murdochians should set an example in being practical as well as far-sighted. For only by being practical can they fulfil the appointed tasks, and only far-sightedness can prevent them from losing their bearings in the march forward.

Or perhaps everyone should just get a decent North Korean haircut.

As always David Rowe gets it right and is more up to date in his humour (and more Rowe here): 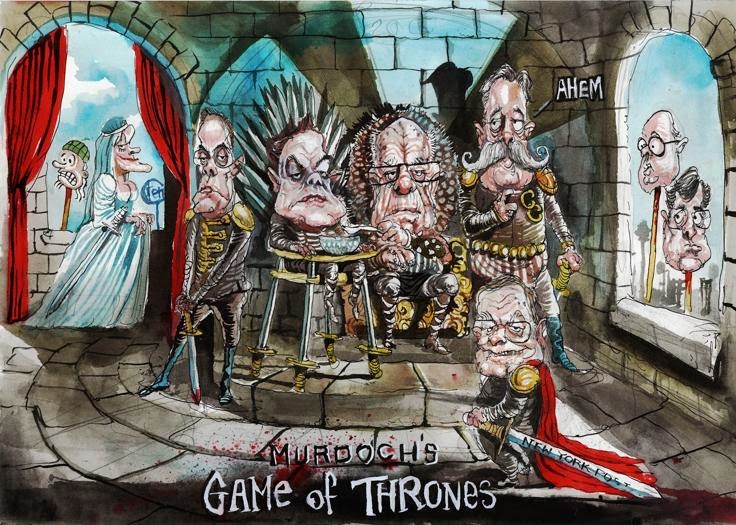 Oh look at all those heads on poles ... so decorative. Is that Kim in the picture window?

But it wouldn't be a Friday if the pond couldn't celebrate the comedy stylings of Piers "Akker Dakker" Akerman.

If you read black knights (yep that's the header), it's clear that even more old Akker Dakker was caught on the hop.

While Liberal republican Malcolm Turnbull tried to gently mock the notion of restoring such honours by mentioning a number of South American nations which confer knighthoods, the former governor-general Dame Quentin Bryce’s ready acceptance of her new title strikes many as hypocritical.
Dame Quentin set a new standard for vice-regal clothing and logged record air miles, not least during her $700,000 African safari in search of stray UN votes.
Not so much Dame Nellie Melba, perhaps, as Dame Edna Everage.

And so the servile knob polisher gets to the end of his piece with only one mention of the author of the folly, His Lordship Tony Abbott, and that in the very first line.

Possibly it's dawned even on the fat owl of the remove that all that nonsense about Tony Abbott being a man of the people, an egalitarian warrior, has been revealed as so much bullshit.

Abbott might, as the reptiles at the Oz noted, be adept at wedges, but at heart he's also a conservative more deeply bizarre and weird than even an Akker Dakker can comprehend.

You see, there's only so far you can get by abusing and blaming the opposition, and the recipient of gifts.

The pond has already had a go at bubble head Quentin Bryce for being beguiled by the serpent. But why is it that Akker Dakker can go there, but he can't point out the treachery and hypocrisy of the seductive serpent?

It's the kool aid of course, just as 99 penalties to 0 is seen as the only way to referee the game ...

Ah well, at least the cartoonists are having a field day, and it's sure to continue, but the pond thought after looking at this week of folly, that Churchill should also be quoted, and that so far as His Lordship Tony was concerned, this wasn't the end, it might not even be the beginning of the end. But it was certainly the end of the beginning ... (and it being the intertubes, the rest of Churchill's speech here).

Going forward, as Maoists and Murdochians must do, it will be impossible to look at Abbott without a smile, or perhaps a snigger. Suddenly the budgie smugglers and the MAMIL jokes, long past their use by dates, can be replaced by silly ass P. G. Wodehouse jokes and talk of the Bunyip aristocracy.

Yes the Wabbott has cwossed the Wubicon and become a figure of fun for ever hereafter. Take it away David Pope, and more Pope here: 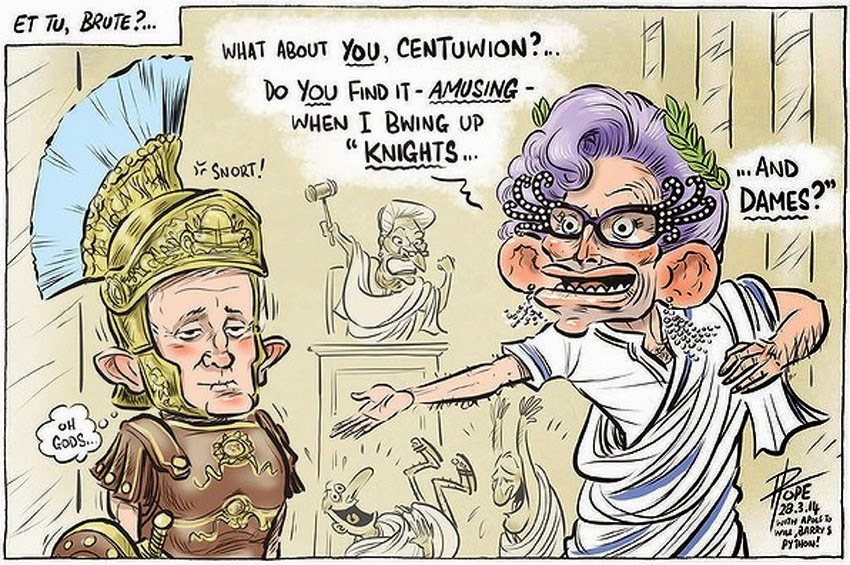 Hubris has come early this year ... but meanwhile, as the stage entertainer struts his stuff, the real work, the looting and the pillaging and the transferring of assets from the poor to the rich, continues apace ... what a fine act of prestidigitation it's been ...

Finally, for the sake of the long absent lord, when will somebody tell all those searchers they're wasting their time in the Indian Ocean?

Look in a cave somewhere in northern Pakistan. Oh sure it'll be a big cave, but they have big caves up that way ...