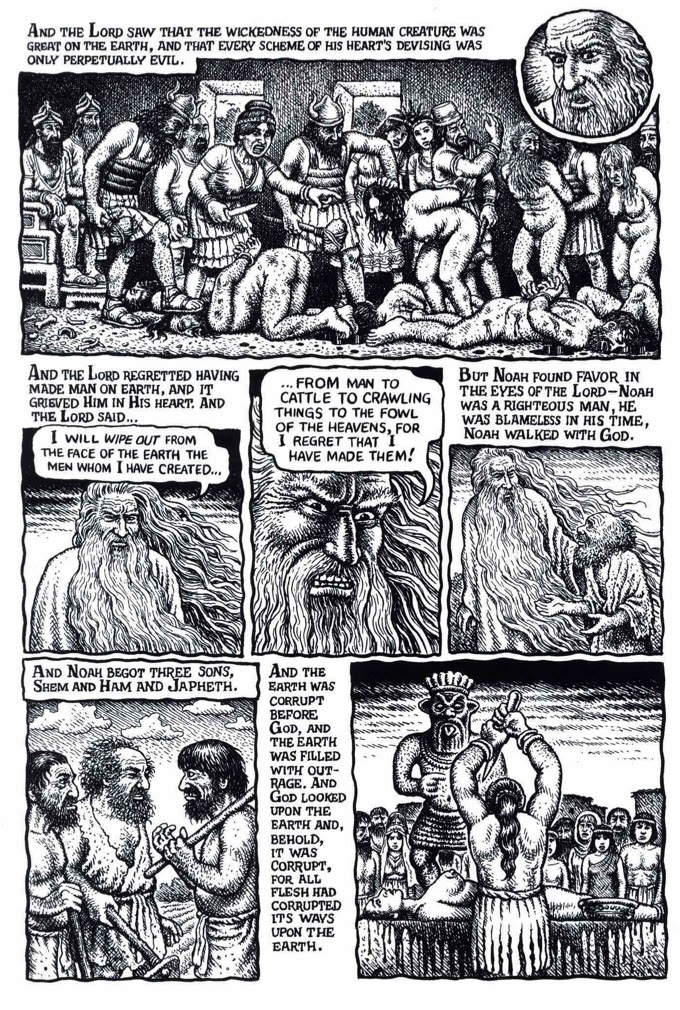 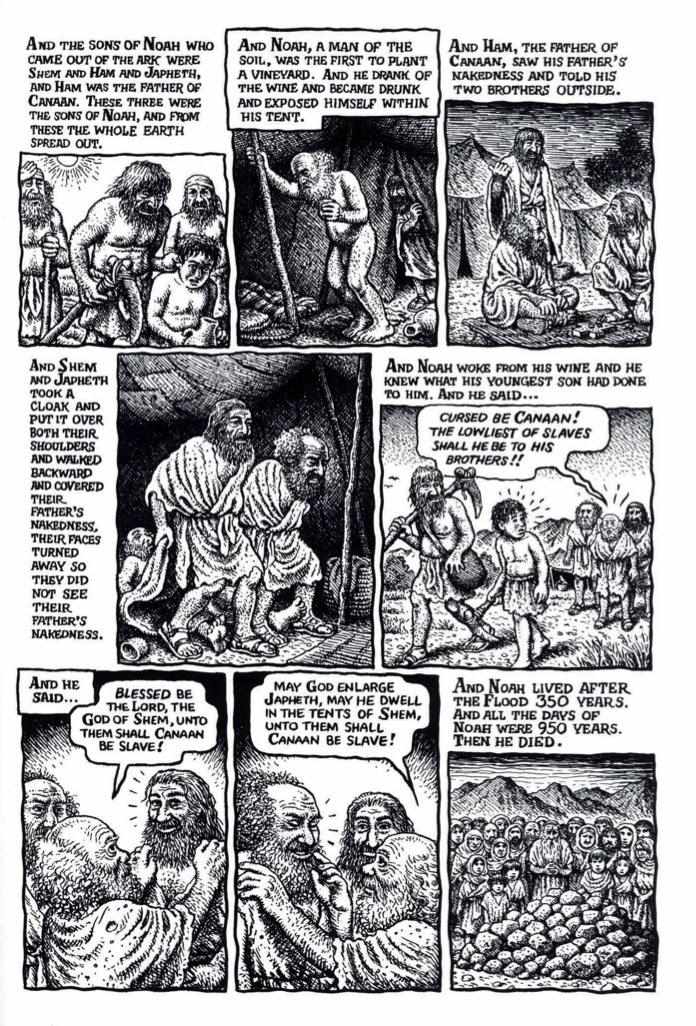 (Above: the pond channels Rusty, and genocidal, vengeful gods with anger management issues, thanks to Robert Crumb)

Amongst the many tidbits that have emerged during the inquiry into child abuse, this one caught the eye:

The Sydney Catholic archdiocese controls funds worth more than $1.2 billion and has regularly made multi-million dollar tax-free profits.
The royal commission into child sex abuse heard the archdiocese banked surpluses of between $7.7 million and $44 million between 2004 and 2007, a period during which the Catholic church was aggressively defending a claim for $100,000 brought against it by former altar boy John Ellis. (Sydney church's $1.2b wealth revealed)

Now this won't be news to anyone with contact with the church - the gay priest in the pond's extended family leads a fine old life, with the occasional international junket, and nothing wrong with that. Well the gay bit ...

What's astonishing is that this ponzi scheme could keep operating on a tax-free basis, while making offers that the most basic consumer protection legislation would find misleading and deceptive.

When the pond last checked, not a single customer had returned to report on what life was actually like in heaven and/or hell, or the Motel 6 of purgatory, or even limbo, before it was abolished ... (and if you got sent to limbo before it got abolished, do you get a refund?)

Yet the behaviour of the people who run the church seems designed to guarantee them a life in hell, or at the very least, a very long time in purgatory.

How is this Christian?

Sydney Archdiocese business manager Danny Casey told the commission on Tuesday that the church's funds, worth $1.24 billion, included extensive property holdings and cash and were ultimately controlled by the archbishop.
The commission also heard the church is spending more on victim compensation and less on legal fees than in the past.
Mr Casey said surpluses recorded by the diocese were exempt from income and capital gains tax and were reinvested to allow the church to do "good works".

Good works? So putting victims through a life of hell on earth is a good work?

Well that's handy good work if you can find it.

As for the rest, the pond doesn't have anything to add to David Marr's thorough coverage in A cup of tea with the cardinal: what George Pell did in the Ellis case.

The sub-header says it all:

Pitiless it was, and what follows is a singularly depressing read.

Pell did his best to befuddle, but it was clear that the matter of Ellis was conducted with the knowledge and consent of the clients instructing their lawyers to be right royal legal bastards ...

What always amazes the pond is that fraudulent schemes like this reside outside the taxation and legal system - hence the church escaping the Ellis matter on a technicality which said it couldn't be sued - and there's no move to tax the profits, and instead other rackets - from Scientology to Hillsong - work the same side of the 'make out like bandits' street.

There's endless media coverage of welfare bludgers, dole cheats, and Aboriginal people living like princes on their lavish government cheques, and no attention at all to the lack of oversight of this long running racket.

Is there a little comedy in the house?

The film’s boldest stroke, though, comes from a logical quibble with the book of Genesis: if God was asking Noah and his family to repopulate the earth, was he not demanding incest?
Aronofsky adds an adopted daughter, Ila, played by Emma Watson, to give them an out ... (here)

Meanwhile, England has been reduced to rubble by the first gay marriages. Civilisation has foundered. How much better to follow the path of Islamic fundamentalists and Vlad the impaler and keep on persecuting gay people.

Archbishop of Canterbury signals end of C of E's resistance to gay marriage.

Well that's not going to fly down under.

Thank heavens for the angry Sydney Anglicans, this week featuring Jensenist thinking at its finest in Why Bible teaching is evangelistic:

We must read in the context of the author, not our own context. We may try a Marxist or feminist reading of something in order to free ourselves from our own context and open ourselves to alternative ways of thinking – but unless we are reading a Marxist or feminist writer we will not understand what they are saying. The author’s context is more important than the reader’s context.

So only an angry Sydney Anglican can discern the reality of Adam and Eve.

Now where's that adopted daughter, or we might have a case of incest on our hands? What's that? The sons had wives? What, like Woody Allen?

And there's another Jensenist scribbling away in Service not surveillance.

Actually the pond has no idea what this Jensenist is on about, though it seems to entail some disapproval of governments collecting data and information on individuals.

Now back in the day, the pond learned that, just as god was the first genocidist, god was also the absolute tops at surveillance and data collection.

Not a sparrow's fart would go unnoticed. Not a single sin the pond committed - oh darn, bugger it - would go unpunished, and filthy mouths would be washed out with soap, and filthy thoughts expunged, but not before they got toted up, and added to the great list in the computer in the sky, which would determine whether it could be avoided by confession (or a healthy brown envelope stuffed with the folding stuff) or a last act of contrition, or it was off to toil in hellfire for eternity.

And god made no secret of it. Oh there were guardian angels and spies and snitches, all delivering the news to Ms 1984 herself, as Psalm 121 made clear:

Which is nonsense of course. On a daily basis god fails to keep all sorts of people from harm, while promising, via his data collection and surveillance activities, to send a lot of recalcitrant wretches to hell.

Somehow out of that, Michael Jensen constructs this:

This is then a model for us of the non-paranoid, non-desperate exercise of power. Power as God exercises it in Jesus Christ is not established in surveillance but in service. The great machines of power-knowledge that surround us today – the data-gatherers, the government agencies, the financial institutions, Google – they do not have the tight grip on us that they claim. Rather, they are, like Augustus, doing the bidding of the God of Israel, even as they seek only their own gain. Like a skilful wrestler using his opponents’ strength and weight against him, the God and Father of our Lord Jesus Christ has woven the plans of human powers into his own plans, to overturn them and to chasten them; and by keeping our gaze on him, we can learn to see human power for what it truly is.

Only a Sydney Anglican ...

Enough already, time to turn secular and celebrate the past week, and the bold work of that brave Catholic knight, Sir Wabbott, as celebrated by the Courier-Mail.

Yes, even the Mail couldn't resist a dig: 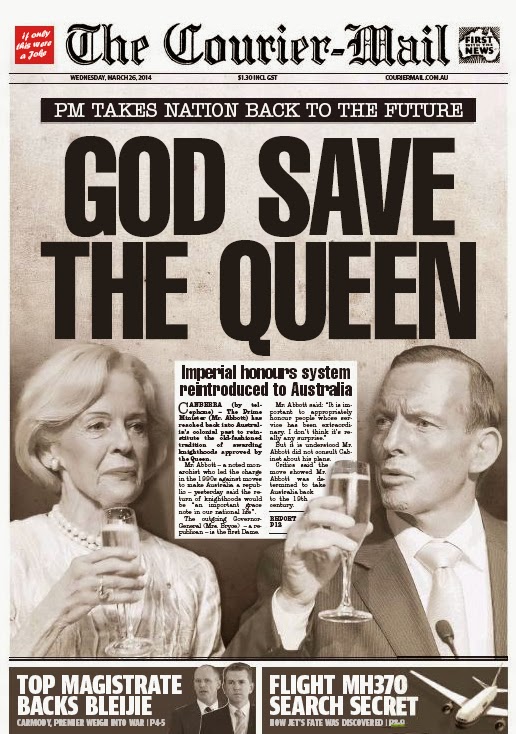 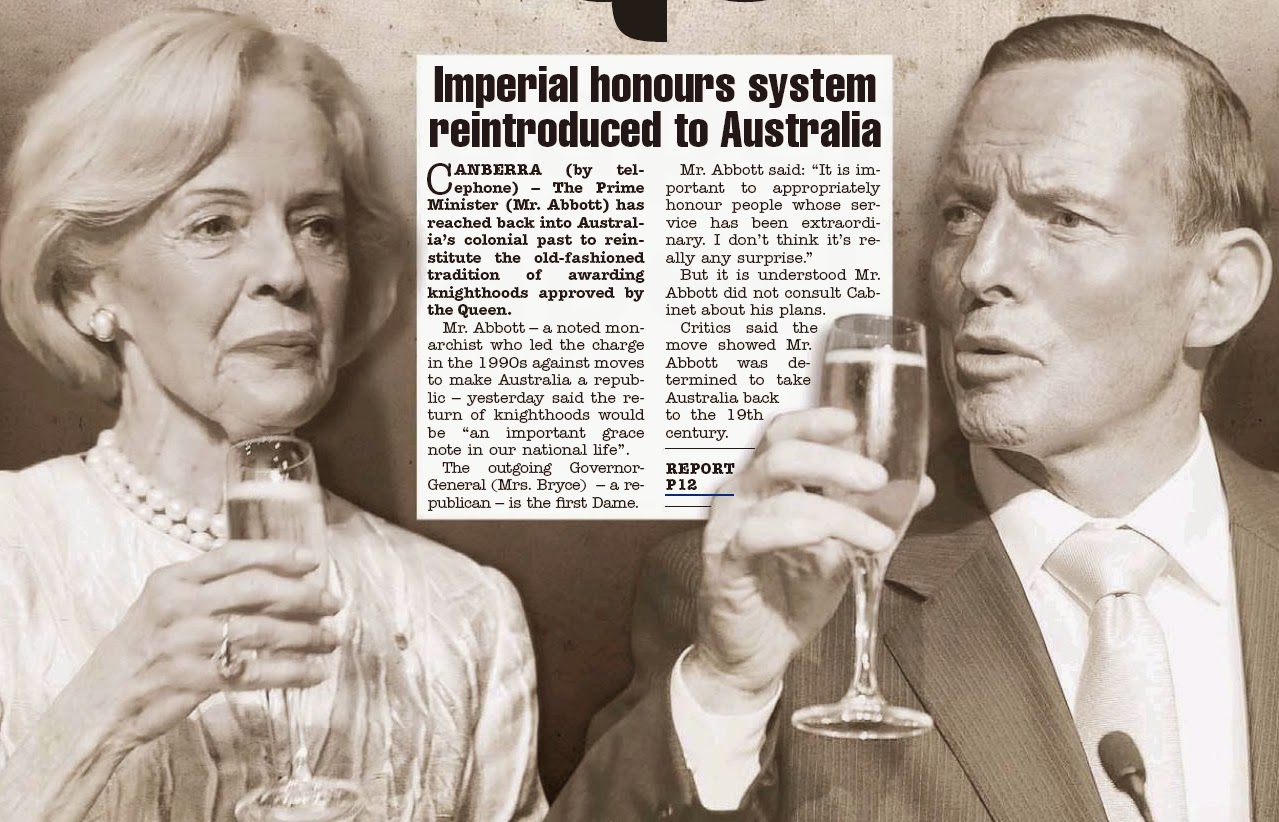 If only this were a joke?

Well except for those who saw Colbert endorse Joni Ernest, Iowa hog castratrix (if that's a word), with the original ad up on YouTube for the moment: