Please note: we're not, under any circumstances, for having a fair go ... 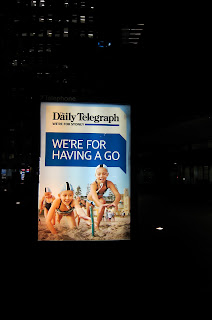 (Above: is it possible to imagine a more nauseating, deceptive and misleading advertisement, placed out in the street, and assaulting the eyes of innocent passers-by?)


So last night the pond sat through the two hour twenty minutes generational saga The Place Beyond the Pines, featuring the Beagle (Ryan Gosling) as a wall of death motorbike rider turned bank robber who comes up against - what to call Bradley Cooper, the Squirrel? - an ambitious cop who shoots him and uses the killing to further his career as a DA.

Somehow the two sons - the Beagle's is tortured and introspective, and the Squirrel's a drug-taking brat - end up in the same school, and the question arises as to whether the Beagle's spawn will take down the Squirrel and/or his spawn ...

Now it was nice to see Ben Mendelsohn making a living as the new Warren Oates and Rose Byrne turning up to whine again - though no one has ever given the pond a good reason - so oi, oi, oi and all that, but the movie seemed to be trying to say things about what was wrong with the United States and District Attorneys, while celebrating motorbikes and wheels on the wild side, but by the end of it, the pond was ready to erupt and cross swords with anyone about anything.

So what have we got?

Well not Paul Sheehan, frothing and foaming about public servants and sex and frolics and wildcat judges in Judges' frolic folly costs us dearly.

And not the schizophrenic rags and their reading of the runes, managing to extract entirely opposite headlines from the very same poll results. Guess which way it went. The reptiles at the lizard Oz went one way: 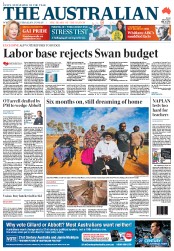 While the Fairfaxians came to a slightly different set of headers: 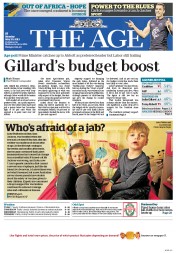 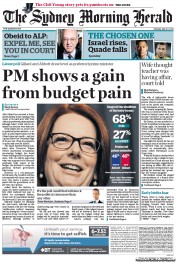 Sort of like a re-run, a re-hash of the Beagle v. the Squirrel, while over at the Daily Terror, the lads conjured up an entirely mischievous EXCLUSIVE about federal Labor rats who after a slaughter in Sydney's west are supposed to leave the sinking ship and take on big Bazza. 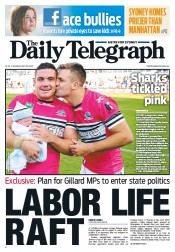 Naturally there's not a single named source for the story Federal Labor MPs urged to state switch if they lose at the September Federal election, and sundry politicians, including Chris Bowen, are invited to hose down the unsourced speculation, and the question arises, can the Daily Terror sustain this sort of casual, insulting, mischief-making, deceptive and misleading storytelling and bullcrap exclusives all the way to the federal election?

Of course he does and of course they can ...

What a vile humbug ideological warrior rag it is ...

Meanwhile, in the usual way, the reptiles at the lizard Oz have put a story by Bjørn Lomborg, Harvesting forests to reduce fossil fuels the next big boondoggle, behind the paywall so they can charge you for it, when the very same piece was published here, Hugging a Burning Tree, some five days ago and can be accessed for it.

Yep, the next big boondoggle isn't hugging a burning tree, it's Chairman Rupe charging like a bull for what is free ...

Free is about all Lomborg is ever worth, especially this piece, which conjures up a world where environmentalists - un-named - are leading the charge to burn down the trees of the world, and heroic Lomborg is standing up for the trees. Won't someone think of the trees, he moans, without mentioning how Chairman Rupe might save a few trees by refusing ever again to publish the Daily Terror ...

Look, if the Philippine Daily Inquirer can publish Lomborg being a twit - for free - what on earth is he doing locked up in the lizard Oz, and worse, being printed on paper derived from cut down trees (and let's not swallow all this cheap talk about recycled pulp, when the lizard Oz recycles pulp Lomborg).

Actually when you google the piece, it's all over the place like a virus, and all for free ...

Meanwhile, there seems to be trouble in plant, what with Peter van Onselen daring to compare visionary Bazza 'let's have that second airport in Canberra' O'Farrell to Bob Menzies, and even worse, daring to suggest that the likes of Christopher "chant it to me in Latin" Pearson and Janet "Dame Slap" Albrechtsen might be barking mad, or at least a little prejudiced, as you can read in Heir to the Menzies legacy, which seems not to be affected by the paywall because it carries an astonishing insight ...

This newspaper's columnist Christopher Pearson recently described O'Farrell as a "pretend conservative", lampooning him for signing up to the Gonski schools reforms. Janet Albrechtsen did likewise, going one step further by describing O'Farrell as "not a real Liberal". Yet it is hard to argue with O'Farrell doing a deal with Canberra when it involves better outcomes for his home state. As one senior Liberal insider put it, "I wonder if those columnists have even looked up the details in the Gonski package. It includes principles Liberals are supposed to support, like a devolution of authority to local schools."

Dame Slap and the Latin man off with the vicious pixies? Cheap-arsed uninformed cheerleaders for Tony Abbott's brand of feral conservatism and rampant negativity?

Who'd have thunk it ... and where has van Onselen been this last decade? Does he have any clue about the rag he writes for?

The cheerleaders are of course only doing the bidding of their master, who right at the moment is turning into a tweet eccentric, suggesting that senility is just around the corner.

Here's the tweets that made Crikey suggest that Rupe needed to take a Bex (and never mind the kidneys) and have a good lie down (the world according to Rupert): 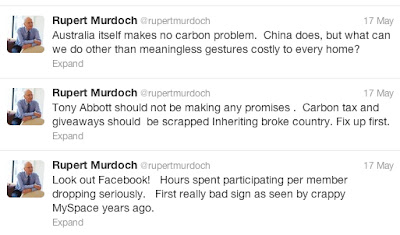 Yes the man who bought MySpace and turned it into a wasteland has the cheek to offer advice to Facebook.

But Crikey jumped too early, and missed the best tweets of all:

Uh huh. It turns out that Rupert is a flat taxer, and the poor man suffers from vicious taxation.

Once again the sight of a pitiful, weeping and wailing billionaire churns the pond's stomach with the unfairness of the universe ...

Yes, the fish always rots from the head:

What an ugly miserable world Murdoch la la land is, full of climate and NBN denialists, as his minions carry out his mission ...

The pond hereby apologises to the Beagle, and other beagles everywhere.

Now for those of you who came in late, perhaps you're wondering about the Beagle joke.

Credit where credit is due, we owe it all to Anthony Lane at The New Yorker reviewing Gangster Squad (behind the paywall):


Gosling, who did such demanding work in “Blue Valentine” and “Drive,” must have laughed when he got the “Gangster Squad” script and realized that his principal duty, as Sergeant Jerry Wooters, would be to deliver The Look. You know the one: imagine that your local animal shelter sends out a fund-raising leaflet, and Gosling is the beagle on the cover. It never fails.

So whenever you're tempted to take a look at a rag put out by Chairman Rupe, remember he's pretending to be a long suffering Beagle, tortured by taxation. And if you swallow that, you'll swallow anything ...

At least Ryan Gosling only makes bad movies, and a few good ones, whereas Rupert Murdoch's empire ruins lives ... and at least Gosling is cute, even if his companion isn't a beagle .. 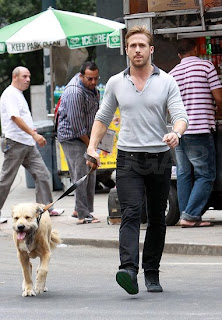 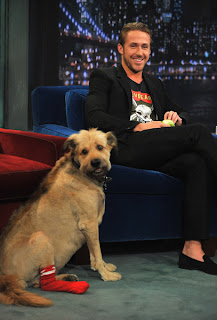 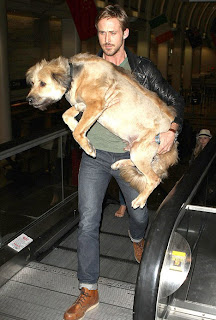