Please be assured, Magic Water Sheehan, Miranda the Devine and Akker Dakker that nothing fruitful or sincere has ever come from reading you ... 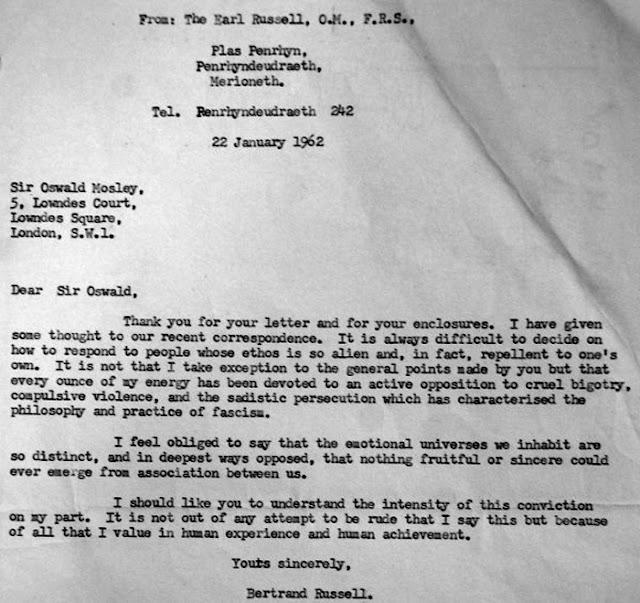 It's been doing the Facebook rounds for weeks now, and for a good reason, because it encapsulates the sort of letter, the sort of thoughts, anyone would love to deliver to a member of the commentariat.

It is always difficult to decide how to respond to people whose ethos is so alien and, in fact, repellent to one's own.

Oh yes, take that. The next sentence requires the odd variation but it continues to hammer the point home:

It is not that I take exception to the general points made by you but that every ounce of my energy has been devoted to an active opposition to cruel bigotry, compulsive violence, and the sadistic persecution which has characterised the philosophy and practice of Murdochian and Fairfaxian journalism and rabid right wing commentariat abuse (the original referenced fascism, but you can see how it can be varied for worthy causes - insert climate denialism or Bolterism as required).

Then the killer blow:

I feel obliged to say that the emotional universes we inhabit are so distinct, and in deepest ways opposed, that nothing fruitful or sincere could ever emerge from association between us.
I should like you to understand the intensity of this conviction on my part. It is not out of any attempt to be rude that I say this but because of all that I value in human experience and human achievement.

Yes, it's a killer, and the signature belonging to Bertrand Russell, the Earl Russell so to speak, gives it a certain cache and clout, despite attempts to denigrate Russell's earlier relationship to fascism by people who really don't have a clue.

But sadly words rarely change anything. Take Paul Sheehan for example - someone take him and drop him into a briar patch far away - who has been writing - or ranting - his nonsense for decades now.

Nothing can stop him, nothing will change him, nothing will deter him from his course, even when, as this morning, he enters the intercine underworld of NSW Liberal party feuding in A Liberal undermining his leader.

His ostensible target is one Alex Hawke, for daring to speak out against Tony Abbott's wretched attempt to widen the social equity gap with his middle class welfare scheme for well-off women wanting to have babies, and imagining that the time they take off to have the baby is much more valuable than the time taken by working class women ...

Hawke came at it from the angle of affordability, and the suffering of big business, but displayed a commendable courage in talking truth to nonsensical Catholic-driven power.

For Sheehan, this was an abject act of treachery, equivalent to previous acts of Hawke treachery

Yet who does Sheehan take sides with?

Now Sheehan calls him "one of the most eccentric men in politics", which is a classic piece of Sheehan avoidance.

Now you have to be careful what you say about Clarke - he took legal action against a publisher and succeeded in proposing that imputations of political extremism were defamatory, though if you read his wiki here, you might well find examples of what some might call Christian-based fundamentalist extremism - just remember you read the details in the wiki, not the pond.

Clarke in every way conforms to the pond's definition of a politician worthy of a letter from Bertrand Russell, so you can guess how Sheehan will respond:

On January 28, 2010, Barry O'Farrell wrote to the NSW Liberal Party state director, Mark Neeham, supporting Clarke's re-endorsement for the upper house ticket, adding: ''I am especially grateful for David's support in my efforts to reform the NSW Liberal Party and put an end to the antics that have so damaged our electoral prospects in the past.''

Yes, not a word, not a whit or a jot or a detail about Clarke's "eccentric" views, just a bit of lavish praise from big Bazza, who in his search for a quiet time, a stuffed railway system and a second Sydney airport in Canberra, has never had the ticker to challenge the Clarke power base.

Now Hawke and Clarke once swam in the same pool, but Hawke had the good sense to realise that Clarke was too extreme to ever get anywhere meaningful. Which is to say he's the sort of "eccentric" politician that warms the cockles of Sheehan's heart (while Hawke clearly leaves him cold).

What is Hawke's ultimate crime?

During the past year, Hawke, with no prospect of advancement under Abbott, has been cultivating Malcolm Turnbull.

The long absent lord help us, he's fellow travelling with a moderate. Even worse a copper-loving moderate without a clue about how to sell the dullard luddite's copper sheen ...

And so to a plea for a classic bit of gagging, for shutting the rusting gate and welding it tight:

Last week, Hawke mounted a frontal attack on Abbott's authority with a piece for the Institute of Public Affairs calling for Abbott to scrap his paid parental leave scheme. Last Monday he gave a series of radio and TV interviews elaborating on his opposition to this signature Abbott policy. Whatever misgivings Liberals may have about this policy, the place to air them is the party room, not the media.

Uh huh. Next week of course you're just as likely to read Sheehan raging on about how the Labor leadership, full of faceless men and women, constantly tries to gag debate and restrict it to the party room, and neuter the media, instead of having a full and frank discussion of policies which deserve to be denounced ...

Having chosen to undermine his leader, again, during an election year, again, Hawke is burnishing an inedible association with division, delusion and disloyalty.

Which is code of course. What it really means is this:

Having chosen to side with the most unedifying right wing conservative side of NSW Liberal politics, Sheehan is burnishing an indelible association with division, delusion, disloyalty and rabid ratbag wingnuttery, where charges of disloyalty are more important than the discussion of policies which were delivered unannounced and undiscussed and dumped on the party room.

You see, Tony Abbott came up with the maternity leave policy on his own, and the pond sees no harm in his colleagues pointing out that in this particular case the emperor wears most peculiar clothes.

But not Paul Sheehan, he'll only rock the boat when he scribbles about the Labor side imposing policies without discussion and without consideration of what they mean and whom they will impact...

There should be a healthy discussion of Abbott and his pet policies, but you won't get it from Sheehan. You'll find any attempt at discussion swept under the carpet or into the party room, with a toeing the line that sees faceless people decide facelessly on faceless issues ...

If you love irony, you'll love it.

As usual, the pond will drag out the Bertrand Russell letter, then shove it back in the drawer. What's the use, what's the point?

Meanwhile, the pond missed Miranda the Devine on the weekend, thanks to the Sunday Terror site going down to get refreshed. It turns out she scribbled an anti-capitalist, anti-conspicuous consumption tirade about selfishness in Money cant' buy mum's love, while down below in the comments section, readers decided Mother's Day had been ruined by leftists and leftism, since it's well known that leftists hate mothers and women in general ...

That's what refreshing a site results in?

While Piers "Akker Dakker" Akerman lined up to show his affinity with arts and letters - unlike the Labor party - by unburdening himself in Ideological rot is why ALP is losing touch - with lines like this:

The ALP has long regarded itself as the political party of arts and letters - a reputation as flawed as the party itself.
In part, the myth owes much to the corps of embittered, tenured academics who incessantly wonder what they might have achieved had they ever had the temerity to test their skills in the real world.

In part, it has been fuelled by the writings of leftist historians such as Manning Clark whose ideologically charged black-armband view characterised by his History of Australia permeated the education system and hagiographic biographers such as Jenny Hocking, who authored paeans to former Labor prime minister Gough Whitlam and his attorney-general, Lionel Murphy.

So much hate, from a man with a black-armband view of everything, and yet his character assassination of Manning Clark is from a man who carks it after five hundred words of bile - like the slackarse raging humbug he is - before trotting off for a good meal.

But do rant on:

Fortunately, there are signs the leftist agenda is battling to take hold as planned among the hoi polloi. The above-forecast crowds gathering to commemorate Anzac Day last week were a rebuke to the platoons of duffle-coated playwrights, authors and academics who railed for decades against the observation of the Gallipoli defeat claiming it was a celebration of war and militarism.

Yes, yes, and never mind the many ways Gallipoli has been used as a celebration of war - most often by those who never fired a shot in anger from the comfort of their club chairs. Just go on celebrating the wonders of Iraq and Afghanistan and what a jolly good job the dinki dis have done ...

Amazingly, bizarrely, the rest of the piece is yet another celebration of Nick Cater, and hailing the most important contribution he's made to his adopted nation, like all the other sheep bleating and the parrots squawking in unison in the Murdoch press these past few weeks.

Akker Dakker even compares Cater to Alex de Tocqueville, before shouting at the elites, and never mind his position as an over-paid ivory towered commentariat elitist.

You'll laugh, you'll certainly cry at Akker Dakker's Cater adulation - Phillip Adams should cringe and cower in shame, but he won't, at his honourable mention - and by the end of it you'll wonder why the Sunday Terror site went down - promising to return "refreshed", when in the usual way it returned with the usual reptile hacks rolling out their standard lizard routines ...

Nick Cater is a chenius ...

The funniest thing? Both Akker Dakker and the Devine having a go at the whingers and the bleaters, and yet what do we find on today's front page of the Daily Bleater? 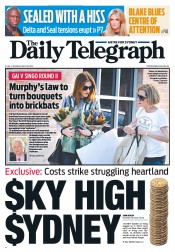 The chances are, the emotional universe they inhabit are so distinct, and in deepest ways opposed, to your own world, that nothing fruitful or sincere could ever emerge from reading these wretched scribblers ...

Roll on the Terror paywall. Come on down The Guardian ... we're still waiting ...

Which reminds the pond of this Steve Bell cartoon. Bell is getting more demented by the day. Perhaps he's been warming up by reading the local Terror and all the Murdoch lizards in a frenzy about Nick Cater? 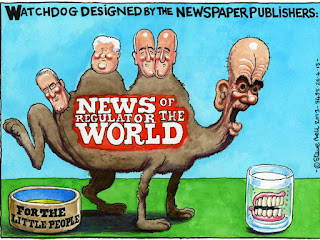