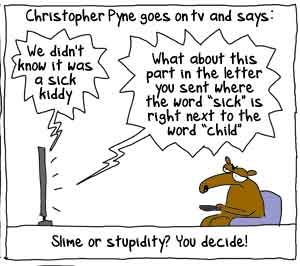 
Which naturally brings us to our second loon of yesterday.

And so we came to another day of pie in the sky bye and bye.

Prices will be lower, taxes will be lower, taxes will be abolished, but the compensation will be maintained, a few public servants will get the chop but who cares about the cardigan-wearers of Canberra, a little less super for working class bludgers, but who cares about bludgers, the environment will be fixed with the wave of a hand and a band of stoute-hearted workers, and all will be well, and so on and so forth.

Naturally the pond was standing by, waiting for a frothing and foaming denunciation of such largesse, an outraged attack on hip pocket politics and cheap and easy bribes and meaningless promises, much like the attacks delivered on those meaningless promises delivered by federal Labor when they announced they'd deliver a a surplus, it was a dead cert, London to a brick and you could put your house on it (and please remember to gamble responsibly and never bet with Tom).

In particular the pond was standing by for endless ranting from the reptiles at the lizard Oz.

Yes, that's how deluded and optimistic the pond remains, no matter the troubles faced in this troubled land in the grip of a dire budget emergency. 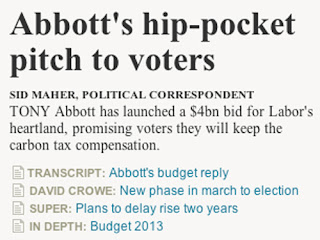 Instead there was the usual euphoric ecstasy, which surely can only come from drinking the kool aid, and the insights considered so important that the thoughts of David Crowe were placed outside the Oz paywall, in Significant new phase in march to election:

The Coalition's promise of a "tax cut without a carbon tax" seemed too good to be true over the past few years, as Tony Abbott skirted every demand to prove how he would pay for it.
Now the Opposition Leader has outlined real policy details in a way that confounds his opponents.

"Real policy details". Now there's a man who's spent too much time at the Liberal party website reading about "real policies".

What confounds the pond is the way the lizard Oz manages to avoid any scrutiny beyond this man love, as Crowe blathered on in said state of euphoria, a bit like watching a modern-day Caesar, a vir triumphalis doing a march through a porta triumphalis, perhaps announcing peace in our time, or at least a successful operation to cure a budget emergency (much nastier than a burst appendix).

Pledging "no surprises and no excuses" if he wins power, Abbott has found a way to offer a cut in the cost of living without imposing too many budget changes that hurt the hip pocket.
This is a significant new phase in his march to the election.

Actually it's not even a significant new phase in the lizard Oz's coverage of the march to the election.

It is a paper dedicated to the art of a fearless and complete lack of scrutiny. Which is no doubt how it inhabits a real world of real policies.

Here's how the lizard Oz covered it in its cocky cage liner edition: 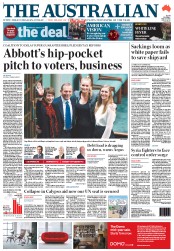 And here's how the Daily Terror lined up for the big grab: 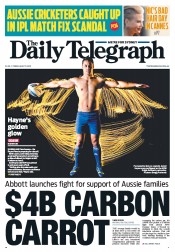 Yes it's the old defame Bugs Bunny come up with a carrot routine.

You could almost imagine our superjock MAMIL transforming into that image of the angelic boofhead Jarryd Hayne, come to save the hapless, useless Blues from the filthy deviant toads.

Now contrast that with the treatment dished out to the fat lady on the 15th: 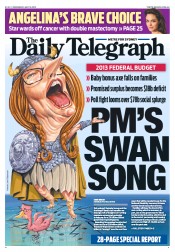 Now the funniest thing is that today is the day the squalid Daily Terror has chosen to launch a bizarre beast it has dubbed news+, a variation on the lizard Oz's gold brick of doom and EXCLUSIVE access to bias, prejudice and unbalanced coverage.

Aw it's so pretty, and you simply couldn't think of it as a demand for money, more just become a subscriber and wallow in thugby league and Fox Sports.

Meanwhile, there's no talk of the need for belt tightening, or going without at the Terror. Remember it's pie in the sky time:

Yep, it's not bribery or a boondoggle if you aim dead set at the wallet.

Poor old Simon Benson did try to introduce a little balance in his coverage of the alleged "budget emergency" in Opposition leader Tony Abbott's budget reply aimed at wallets:

He (Abbott) did not address how he would pay for his generous paid parental leave scheme nor address other structural problems in the Budget.

But that was the penultimate, very short par, and the rest was all about the pie in the sky. You'd think there might be more questions asked of the man the Murdochians and the polls have dubbed the next PM. Hard questions, hard yards, ...

So here's an offer the pond thinks is completely fair. The pond will indulge in news + when that pie in the sky turns up in the purse ...

Yes you sexist clowns, there's more to life than wallets, what about the purses, and dear Mr Benson, take a look at the front pages.

Do you really think two lines constitutes balance in a rag the pond wouldn't use to line a cocky's cage because it's getting harder and harder to find a copy left on the seat of the train by a disgruntled reader who has wasted their dime and five minutes of their life?

Speaking of trains, Fairfax in old Sydney town decided to downgrade Abbott to a third class ticket so it could headline the first class rail revamp: 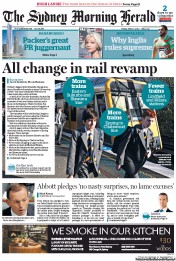 In old Sydney town, the pie in the sky is always symbolised by the quest for a reliable rail service.

Silly old granny has copped a leaked copy of the new timetable, and done a winners and losers verdict in Winners and losers: all change in rail revamp, forced video at end of link, when as the hardened Sydney commuter knows, it's all - as Elton John put it in his memorable lyric - just pissing into the wind (or was that a candle?)

A timetable doesn't count for much when a train malfunctions and the entire system collapses, and you can't catch that VFT to Canberra to make an urgent international flight.

Meanwhile, Michael Gordon at last asked the obvious questions in Abbott pledge at odds with claim (forced video at end of link):

Tony Abbott's pledge that carbon tax will go, but the compensation will stay, sits uncomfortably with the central claim of his budget reply - that Australia faces a ''budget emergency'' thanks to five years of Labor mismanagement.
His decision to use the proceeds from several cuts that have already been announced also underscores the question: where will he find the savings to pay for other priorities, such as the promised modest cut in company tax.

Indeed. The pond was prepared for stout-hearted belt tightening, but it seems we can still have it all.

Predictably, with this good news, in other sections of the rag, the fawning reaches epic lizard Oz proportions, most notably from the reliably disappointing Peter Hartcher, who styles himself as an SMH political and international editor, but who routinely sounds as if he's trying out for a job at the lizard Oz.

Naturally Smart politics from a leader who's growing up is positively uxorial in its praise of Abbott's smart politics and intelligent budgeting.

Now all this is no doubt all very well, but how different is it from the lizard Oz?

And what a bleak uninviting dismal landscape the lizard Oz presents.

Today, in the usual way, in its revolving splash of digital dullness at the top of the digital page, it features Dennis Shanahan getting breathtakingly shocked by the audacity of Wayne Swan, Graham "Gra Gra Swiss Bank Account" Richardson announcing the federal budget was a last will and testament, whereas as he so sadly proves politicians hang around in the atmosphere like a fetid mugwump swamp long after their use-by date has expired, and Peter van Onselen pulling himself up on his teetering high heels to announce that it's high time the government stopped talking about an opposition budget black hole.

Actually it's high time that van Onselen stopped using cliches like high time, and settled for a better cliche, and admitted he's one of the lizard Oz's deepest drinkers of the kool aid.

Throw in Anthony Albanese rabbiting on about something or other (have we got a study for a study about a second Sydney airport for you, but sssh don't mention it in the budget) and Kevin Donnelly denouncing the education revolution - because you know, private education is just so wonderful - and the aforesaid David Crowe, and is it any wonder that the pond feels bleak, existentially alienated and deeply alone in this hostile universe, as we sail through it, mere pimples on a pimple planet?

Is it any wonder that loons in Dallas exercise such a magnetic pull? Or perhaps the pond should move to the NT where loonishness is a way of life and people actually buy a rag knowing it's crap, because what else is there to do? 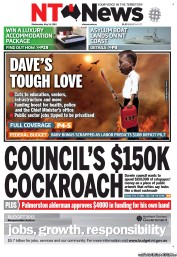 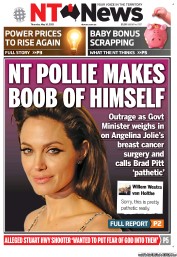 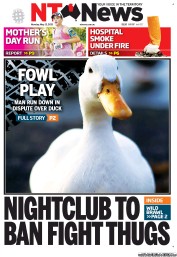 Yep, here's the pitch for the Terror again:

All of this, on top of the broadest and richest range of quality journalism in the country driven by well-known columnists such as Tim Blair, Joe Hildebrand, Andrew Bolt, Piers Akerman and Miranda Devine. 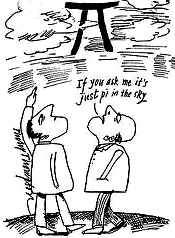