Another day in buffoon land where scientists show off the power of one hand clapping ... 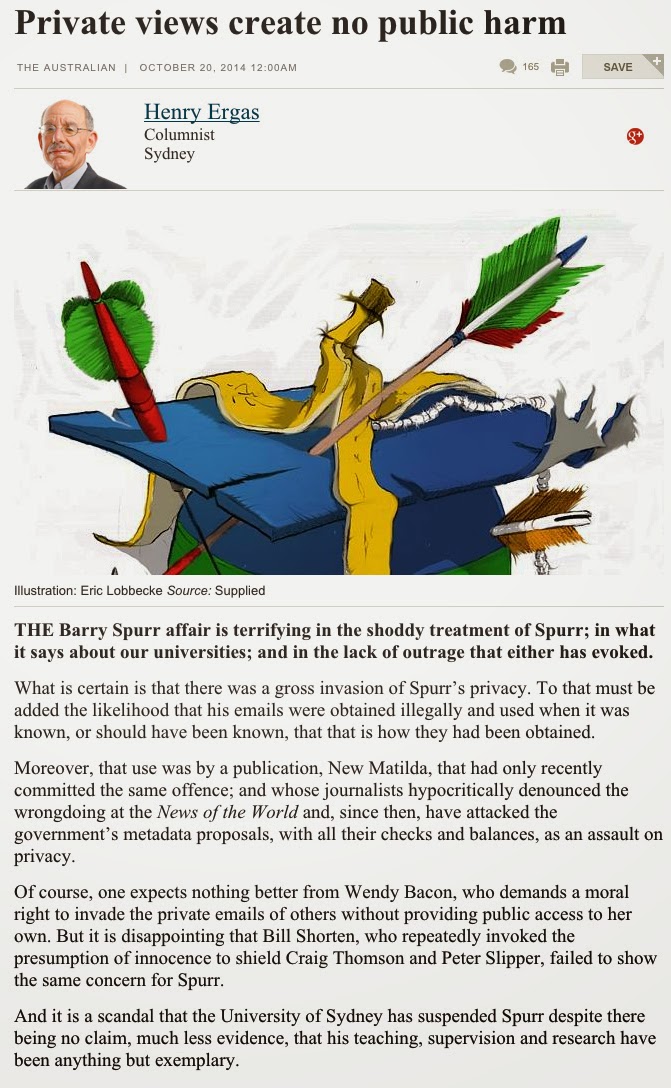 As always, the pond was standing by, breathlessly waiting for the commentariat to denounce the latest shocking and outrageous leaking of personal emails ...

This time of course it was by the Murdochian press, rather than New Matilda doing a Spurr, and sad to say, there doesn't seem to have been a whimper.

Why is the pond routinely surprised by life and hypocrisy and the wretches who drape themselves in its splendid cloth?

It was only at the start of the week that Media Watch contemplated the matter of Spurr, here, with mixed feelings, but who can forget that immortal desiccated coconut Henry Ergas getting his knickers in a knot (it was Jonathan Holmes who pinged Ergas for hypocrisy in Hacked controversial emails spur furious ethical debate).

Hey Henry, there's a hole in your bucket ...

And there were plenty of others lining up, like Lily Yuan Wang's somewhat creepy love letter to Spurr in Spurr a scapegoat of those who would shut down free expression (pleading, begging letter from the paupers of the press at the end of that link)

As Holmes noted, views of leaked emails tend to revolve around political bias. So will the assorted authors who lined up to damn New Matilda now be given abundant space so they can line up to condemn Limited News ...?

Well there was this delicious moment in Jacqueline Maley's explanation  - bear with the pond - of how Julie Bishop's idle chatter about Tanya Plibersek undermining Bill Shorten had drawn attention to her own ambitions (Julie Bishop sparks own Coalition leadership rumours):

And when asked on television who should be our next PM, senior Coalition front-bencher Christopher Pyne committed an embarrassing pronoun spoonerism which did nothing to quell the chatter.
"I want her to be Prime Minister for 10 years and after that people can worry about the next thing in 10 years," Mr Pyne told Channel Nine.
He meant "him", of course, him being the Prime Minister, Tony Abbott.
Luckily the transcript later sent out to journalists corrected the slip, which was in no way Freudian, quite as though it had never happened.

Which led David Rowe to this, and more Rowe here: 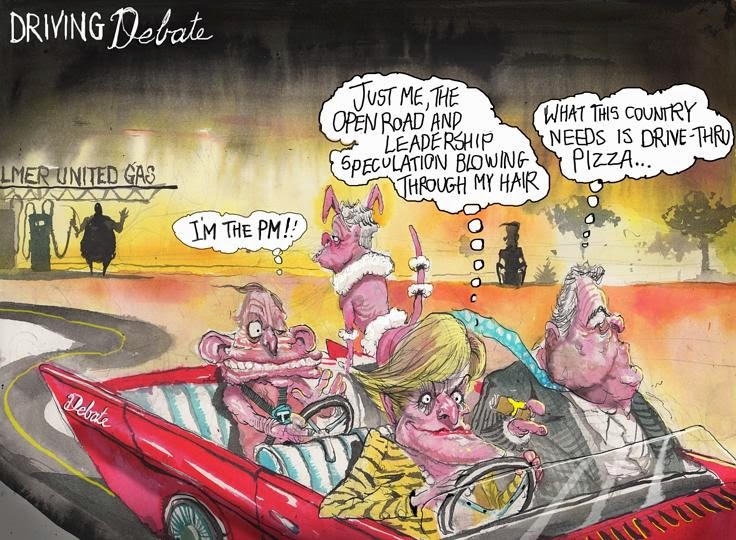 Frankly the pond can't get enough of the poodle and will be shattered when he departs the scene. In the meantime, of course, he will have thoroughly and comprehensively fucked the education system, but surely this is a small price to pay for the ongoing pleasure he provides ...

Normally the pond has limited tolerance for ankle biting, humping, yapping little dogs, but there are exceptions to any rule ...

Leadership speculation is now proving a good game for the reptiles as a stocking filler (remember, less than two months to Xmas).

Niki Savva tried a half-hearted celebration of Scott Morrison, while wiping the floor with jolly Joe Hockey, before coming out with this:
'
The man who built his leadership on the destruction of a great big new tax and, with it, three Labor prime ministers, one twice, appealed across the dispatch boxes for a mature, sensible debate on expanding a great big old tax, sticking out his chin for people to give a good whack, which they did. Talk about predictable.
Pretty soon there will be sniping about Julie Bishop. Either that or she will be written out of the script. Oh wait, that could be happening already. The deputy leader, the only female member of the cabinet and the (now) obvious successor to Abbott, was left off the invitation list for the launch by the Prime Minister last night of a new group set up by his chief of staff, Peta Credlin, designed to mentor and promote female ­Coalition staff, including getting into parliament if they want.
The snub to Bishop was not personal but it was calculated. No other female MP — backbencher or minister, including Michaelia Cash, the Minister Assisting the Prime Minister for Women — had been invited, and boy (or girl) were some of them miffed, their miffedness not abated by prime ministerial invitations to another function today to celebrate “women of the future”. Talk about short-sighted. If the plan is to get more women into parliament, separating them from the women already there sounds counter­productive. And a bit weird. (oh just google it, no need for another begging letter from the paupers of the press).

Meanwhile, the pond's award for "most brazen and shameless politician of the month" goes to the Man himself, leader of Team Abbott, when he turned up at a gathering of scientists - presumably because there's no science minister in the government available to handle the wretches.

Here's the pond challenge. Read the entire speech to the scientists here, without nausea or laughter, and as first prize, you get to join Team Australia.

Actually the pond needs its blithering idiots to get through the day, and that's as good an example of blithering as might be found. But the speech doesn't give the full story, nor does the official tweet quite capture the mood: 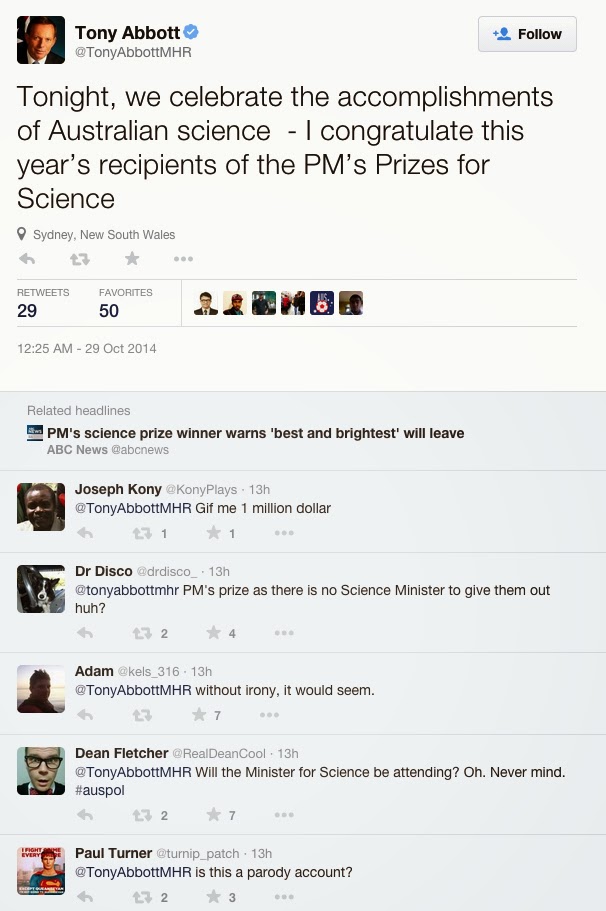 Uh huh. The real fun came when the blithering idiot asked for a pat on the back for being a blitherer: 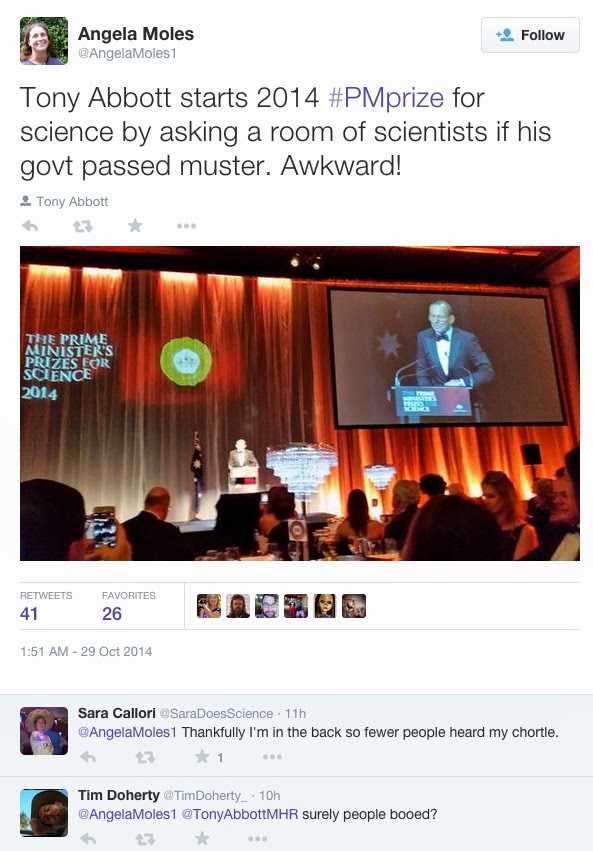 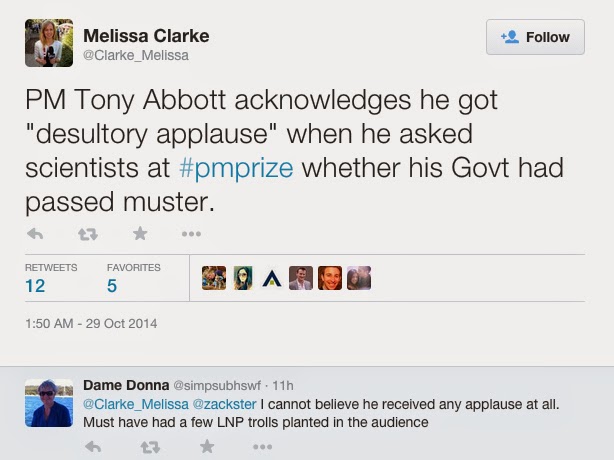 Yes that "desultory applause" was something to hear, and of course it came in the context of the current shameless deal-making with Clive Palmer to piss money against the wall on a useless scheme.

As always, the pond these days turns automatically to the hagiographic Pravda of Holt street to judge how this sort of cavorting should be viewed: 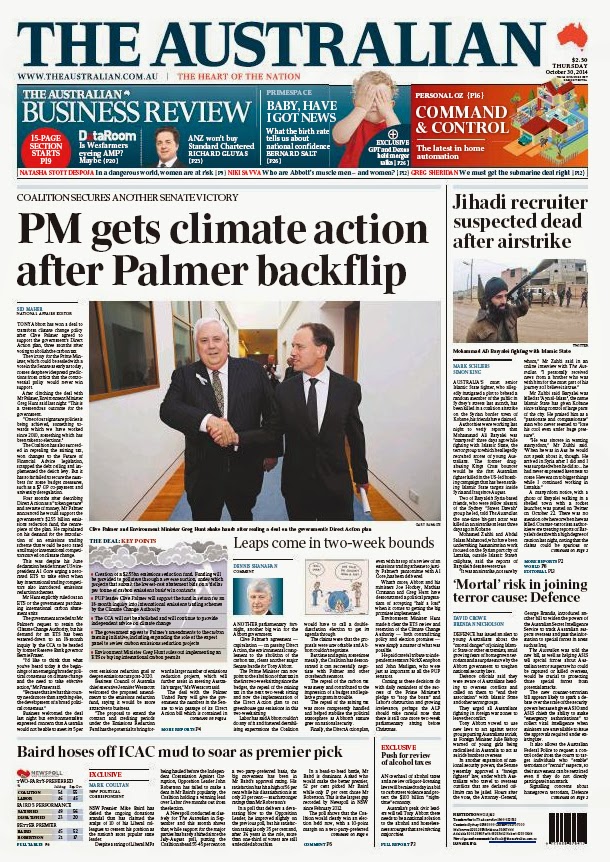 Ah yes, it's climate action à go-go, a man on the move, a Palmer backflip, and never mind the mind-boggling spectacle and hypocrisy of a government setting up a review into a scheme it has sworn for all eternity never to implement.

Well enough of reading the reptiles, there's only so much hypocrisy and stupidity that the pond can swallow on any one day, no matter the post-modernist ironies and jollies to be had from the cavorting of fools like Greg 'Walri' Hunt, who wouldn't know most days how to wiki his fundament.

First remember all that blather about the NBN and the need for rigorous scrutiny and cost benefit analysis and review before setting big schemes in motion?

Deep concerns about the adequacy of the policy remain. The government has not modelled whether the fund has enough money to meet Australia’s minimum 2020 target to reduce emissions by 5%, with Abbott saying during the election campaign he preferred to just “have a crack”...

Have a fucking crack at it?

Separate modelling by Sinclair Knight Merz/MMA and Monash University’s Centre of Policy Studies, commissioned by the Climate Institute, which used assumptions more generous to the Coalition, found it would need at least another $4bn. Abbott has said if Direct Action falls short he will not allocate any more money.
Hunt would not reveal what advice he had to substantiate his “hope, belief and expectation” that the target would be achieved, but said Australia would be helped by the fact that the decline of manufacturing was reducing electricity emissions and that abatement might be purchased more cheaply than he had originally anticipated. The government must reveal by early next year what post-2020 target it is willing to adopt, and is under strong international pressure to agree to much deeper cuts, but few observers believe the “direct action” policy could achieve them. (here)

And thanks to a link in the Graudian, you can be magically transported by carpet back to 2010 and that consummate fop and hypocrite, big Mal, speaking in the House, here:

All of us in this House know that industries and businesses, attended by an army of lobbyists, are particularly persuasive and all too effective at getting their sticky fingers into the taxpayers’ pocket. Having the government pick projects for subsidy is a recipe for fiscal recklessness on a grand scale, and there will always be a temptation for projects to be selected for their political appeal. In short, having the government pay for emissions abatement, as opposed to the polluting industries themselves, is a slippery slope which can only result in higher taxes and more costly and less effective abatement of emissions. I say this as a member and former leader of a political party whose core values are a commitment to free markets and free enterprise. The Shergold report went on to say this about this very issue:
Financing subsidies and specific project-based interventions also impose costs on society from their use of taxation. If these approaches were to be used extensively to achieve large-scale abatement, the economy would suffer losses in economic and administrative efficiency. In contrast, market-based approaches to emissions abatement involve the explicit pricing of emissions, allowing the market to determine the cheapest source of emissions reduction.

It routinely amazes the pond that big Mal can manage to look in a mirror ...

So now a climate denialist prime minister has done a deal with a coal baron to piss money against the wall, because it's cheap - it will only cost $2.5 billion over four years, and when it turns out to be a dud, ineffective, an empty gesture, there'll be a shrug of the shoulders, and that's all ...

No wonder there was the sound of one hand clapping at that gathering of scientists ...

Is there anything more hypocritical than this spectacle? Well yes, there's the bizarre sight of a climate denialist newspaper, home to Maurice Newman, applauding the direct action PM ...

Meanwhile, the loons in the government continue to frolic and play, and cultivate conspiracy theories - Nationals MP George Christensen calls for weather bureau inquiry - while the real business goes on, and the mates get down to looting and rorting the government and the country - Australia for sale: Investment bankers cashing in on Tony Abbott's infrastructure push.

How do the commentariat handle all this?

Who do they blame? 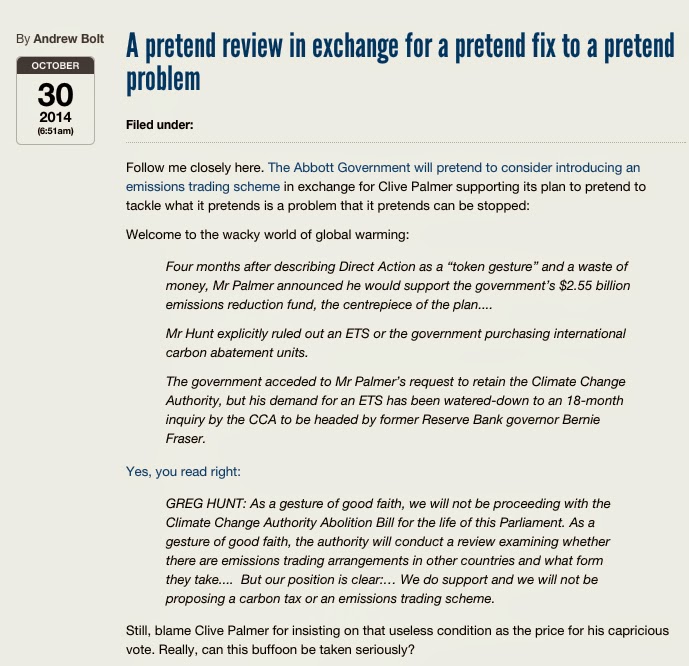 Yes, it's all the fault of the buffoon Clive Palmer.

But the Bolter in that very report mentioned a couple of other buffoons - like Greg "walri" Hunt and the entire Abbott Government and its fearless leader ...

You'd have to be a buffoon to selectively berate only one buffoon when confronted by a gaggle of buffoons ,... 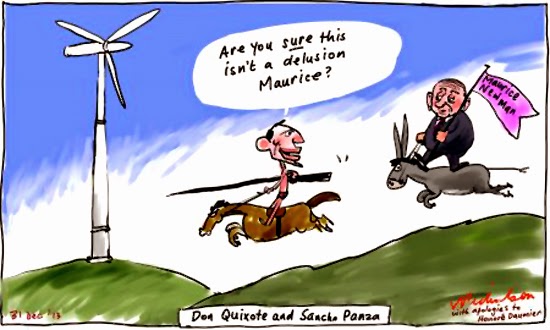