In which all sorts of solutions are discussed ... 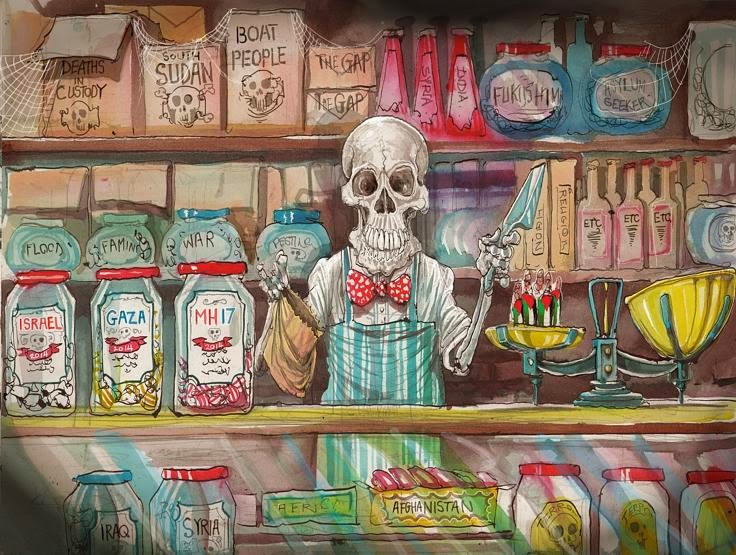 (Above: and more Rowe here)

There's a truly classic headless chook routine performed by Paul "magic water man" or should that be "chicken little" Sheehan in After the worst of Bush, Obama comes to a screaming halt.

It seems Obama's hopeless and useless because inter alia he's failed to sort out Iraq, Syria, Iran, Afghanistan, Libya, and Benghazi, and job insecurity arising from the Affordable Care Act (no, it's not the economy stupid) and deficits and ...

Well indeed, it's an entirely inadequate list. Obama has also failed to sort out  Egypt, Ukraine, the reason big aeroplanes crash violence at soccer matches in South America, the Mexican drug wars, the United States drug consumption that creates the drug wars, violence and plagues in Africa, the feud between India and Pakistan, the behaviour of China in the south China sea, Vladimir Putin, the execrable programs Russia Today puts to air, Islamic fundamentalism and the refusal of Saudi Arabia to allow women to drive cars ...

In fact, if there's a problem in the world, it's likely enough that the Obama administration is to blame.

Each day the pond bitterly regrets that Sarah Palin failed to become vice president of the United States. She has been in exceptional form of late - witness Sarah Palin's Oddball Speech In Denver.

But back to Sheehan.

Inter alia, he makes this heartfelt plea regarding theocratic states in the middle east:

These talks have been dragging on for eight years, since June, 2006. Eight years. That says a lot about Iran’s intentions. Last Monday’s deadline was pushed back to November 25. This gives the Iranian theocracy another five months to jaw-bone the issue while it works towards acquiring nuclear capacity, a goal from which it has never deviated.
The idea of nuclear weapons leaking into the growing blood-letting and religious war-making in this region is horrifying.

Indeed, indeed, it's one of the great blessings that there are no nuclear weapons in the middle east at the moment, and certainly none of them are in the hands of a theocracy.

And then comes this:

A wider context is that the six years of Obama’s presidency has shown that, in the wake of Bush, the US no longer has the stomach to be the world’s policeman, for better or worse. We can only hope that Islamic fundamentalists do not acquire nuclear weapons as a result of Obama’s caution.

Which is a wonderful springboard for the pond and its final solution for Gaza.

Now please, no correspondence about that wording. It is what it is.

My Outline for a Solution in Gaza
Clear and concise, the steps towards achieving quiet in Gaza.
Ultimatum – One warning from the Prime Minister of Israel to the enemy population, in which he announces that Israel is about to attack military targets in their area and urges those who are not involved and do not wish to be harmed to leave immediately. Sinai is not far from Gaza and they can leave. This will be the limit of Israel’s humanitarian efforts. Hamas may unconditionally surrender and prevent the attack.
Attack – Attack the entire ‘target bank’ throughout Gaza with the IDF’s maximum force (and not a tiny fraction of it) with all the conventional means at its disposal. All the military and infrastructural targets will be attacked with no consideration for ‘human shields’ or ‘environmental damage’. It is enough that we are hitting exact targets and that we gave them advance warning.
Siege – Parallel to the above, a total siege on Gaza. Nothing will enter the area. Israel, however, will allow exit from Gaza. (Civilians may go to Sinai, fighters may surrender to IDF forces).
Defense – Any place from which Israel or Israel’s forces were attacked will be immediately attacked with full force and no consideration for ‘human shields’ or ‘environmental damage’.
Conquer – After the IDF completes the "softening" of the targets with its fire-power, the IDF will conquer the entire Gaza, using all the means necessary to minimize any harm to our soldiers, with no other considerations.
Elimination- The GSS and IDF will thoroughly eliminate all armed enemies from Gaza. The enemy population that is innocent of wrong-doing and separated itself from the armed terrorists will be treated in accordance with international law and will be allowed to leave. Israel will generously aid those who wish to leave.
Sovereignty – Gaza is part of our Land and we will remain there forever. Liberation of parts of our land forever is the only thing that justifies endangering our soldiers in battle to capture land. Subsequent to the elimination of terror from Gaza, it will become part of sovereign Israel and will be populated by Jews. This will also serve to ease the housing crisis in Israel. The coastal train line will be extended, as soon as possible, to reach the entire length of Gaza.
According to polls, most of the Arabs in Gaza wish to leave. Those who were not involved in anti-Israel activity will be offered a generous international emigration package. Those who choose to remain will receive permanent resident status. After a number of years of living in Israel and becoming accustomed to it, contingent on appropriate legislation in the Knesset and the authorization of the Minister of Interior, those who personally accept upon themselves Israel’s rule, substance and way of life of the Jewish State in its Land, will be offered Israeli citizenship.

But please, while the pond would like to accept your applause, we simply can't. This brilliant vision is the work of Moshe Zalman Feiglin, deputy speaker of the Knesset and head of the Jewish Leadership faction of the ruling Likud party. 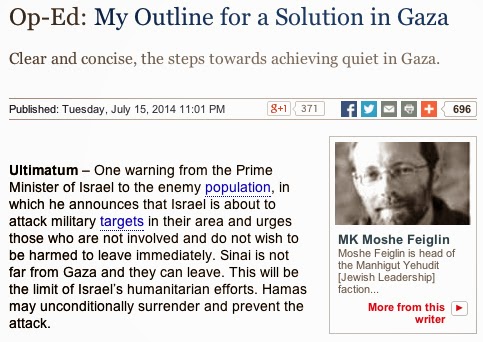 Meanwhile, here's that pariah, Hannah Arendt, writing back in 1948:

...even if the Jews were to win the war, its end would find the unique possibilities and the unique achievements of Zionism in Palestine destroyed. The land that would come into being would be something quite other than the dream of world Jewry, Zionist and non-Zionist. The ‘victorious’ Jews would live surrounded by an entirely hostile Arab population, secluded into ever-threatened borders, absorbed with physical self-defense to a degree that would submerge all other interests and acitvities. The growth of a Jewish culture would cease to be the concern of the whole people; social experiments would have to be discarded as impractical luxuries; political thought would center around military strategy…. And all this would be the fate of a nation that — no matter how many immigrants it could still absorb and how far it extended its boundaries (the whole of Palestine and Transjordan is the insane Revisionist demand)–would still remain a very small people greatly outnumbered by hostile neighbors. Under such circumstances… the Palestinian Jews would degenerate into one of those small warrior tribes about whose possibilities and importance history has amply informed us since the days of Sparta. (more here)

But you won't read any of this sort of stuff when you read Paul Sheehan, who lives in a world where some forms of theocracy are good, and some forms of religious fundamentalism, while  other fundamentalists and theocrats are bad and routinely need to be demonised, just like Obama needs to be routinely demonised...

And along with the demonisation, what you cop with Sheehan is disingenuous dissembling word games, of the kind that runs Lest anyone think I am being partisan about Obama ...

Oh hush now, why wash out the pond's mouth with soap, why would anyone think a right wing ratbag member of the commentariat like Sheehan is ever being partisan about Obama ...

Sheehan thinks he can get away with peddling this tripe because he also called George W. Bush the worst president in a hundred years, a fatuous assertion which only reminds readers that he specialises in chicken little sensationalism at every turn of the magic water bottle ...

Sheehan was peddling exactly the same sort of magic water chicken little doom and gloom about Obama back in November 2010 in Obama feels the heat as voters desert in droves. Back then it was debt, Obamacare, the Mexican border, and so on and so forth and etc.

Well the pond sometimes likes to go even further back with Sheehan, back to a piece he wrote in 1995 which still turns up on white nationalist sites all over the place:

"THE RACE WAR OF BLACK AGAINST WHITE"
by Paul Sheehan. Saturday, 20 May 1995 The Sydney Morning Herald (Australia) T
The longest war America has ever fought is the Dirty War, and it is not over. It has lasted 30 years so far and claimed more than 25 million victims. It has cost almost as many lives as the Vietnam War. It determined the result of last year's congressional election.
Yet the American news media do not want to talk about the Dirty War, which remains between the lines and unreported. In fact, to even suggest that the war exists is to be discredited. So let's start suggesting, immediately.
No matter how crime figures are massaged by those who want to acknowledge or dispute the existence of a Dirty War, there is nothing ambiguous about what the official statistics portray: for the past 30 years a large segment of black America has waged a war of violent retribution against white America. (here)

And so on. If you google that, you will find it reprinted in all sorts of places, usually sordid and racist and coupled with offensive racism.

Of course it's now impossible to wend a way back to the original, but here it is being cited in a book about press bias and politics: 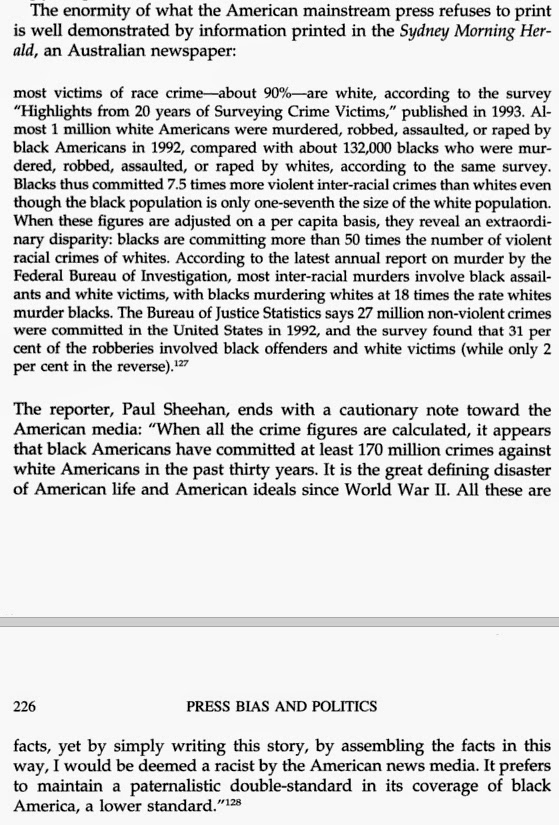 It's impossible to assess the incalculable damage that a few words so widely circulated have done in the world.

But it reminds the pond that whenever dissembling disingenuous folk talk about how they're not partisan, always check for the forked tongue. You might be being sold a pup, a carry on about theocracies and nuclear weapons, or a never ending thirty year war, the worst president in a hundred years (and never mind Nixon resigning), or Obama being a complete failure ... or on a bad hair day, a final solution ...

When a man routinely scribbles as an hysteric, everything takes on the form of hysteria ...

Meanwhile, speaking of psychological conditions in another country it seems paranoia is a growth stock, thanks to bigots living in Brandistan, and thanks to Pope and more Pope here: 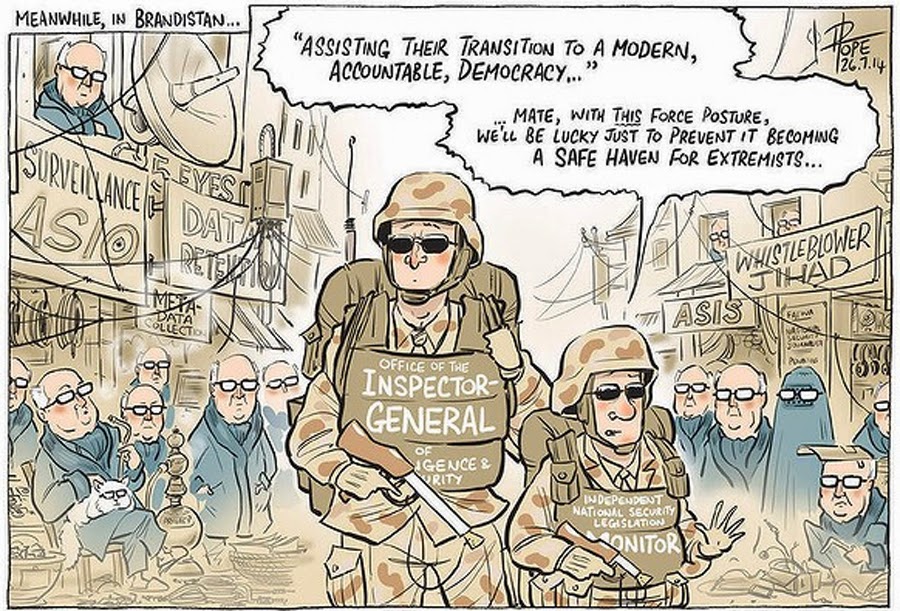