To answer your question, Peter Brent, everyone's disposable ... the poor, the young, the student, the pensioner, the disabled, the Tasmanian, jolly Joe Hockey ...and Tony Abbott ... 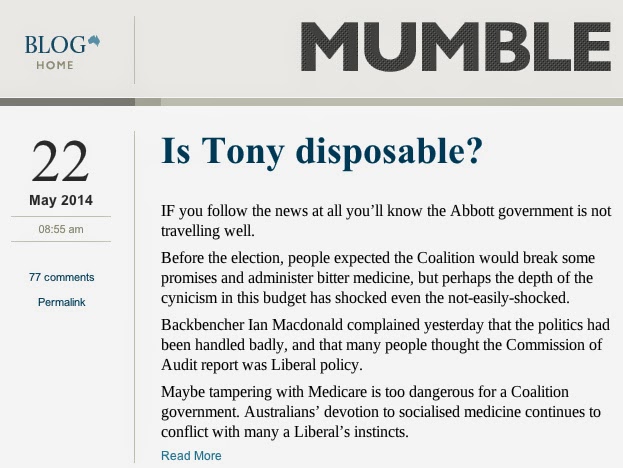 (Above: more here, and more below)

What's remarkable is how quickly it's happened.

The bungles, the bloopers, the mis-statements of policy, all building to that fatal question.

Helped along by the stupidity of a Queensland MP suggesting that we should all troop off to Asia. Yes, he did, yes he did. Here's how that looked in Fairfax: 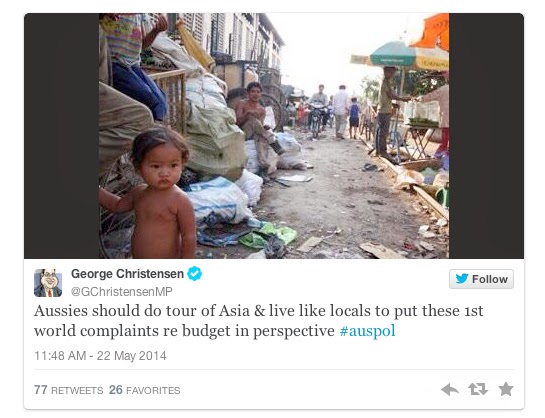 And here's the patriotic flag-waving fool himself: 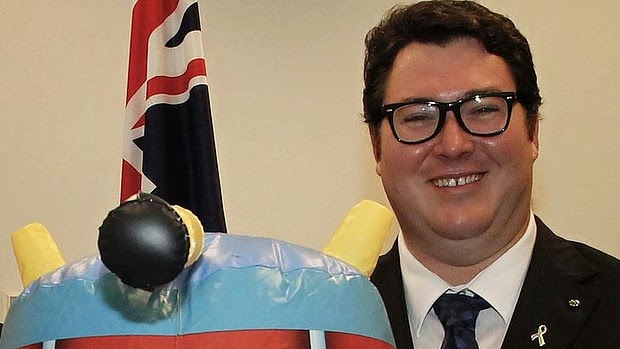 And then there was the stupidity of Tony Abbott telling Tasmanians it would be no big deal if they left Tasmania for happier climes.

A canny politician would have just said that he expected his esteemed state colleague to turn Tasmania into a golden state, with jobs galore, but instead, in an ideological folly, he told anyone in earshot that moving to Woop Woop or beyond the black stump would be no big deal, especially when compared to living amongst the apple munchers of Tasmania.

How did that turn out? Did it help the momentum build to the fatal question?

Well the Hobart Mercury did its best to confuse and conflate Tony Abbott with a zebra: 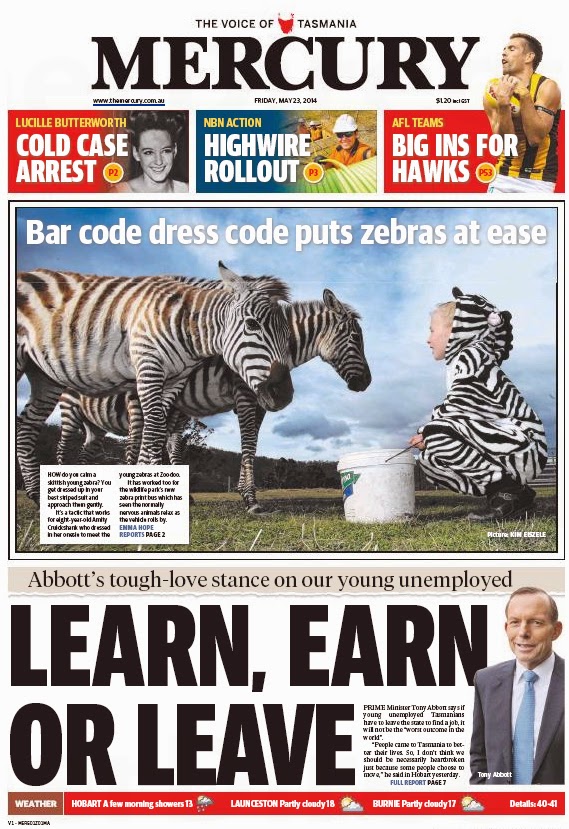 But even the Murdochians posing as the "voice of Tasmania" found it a tad hard to swallow, and allowed themselves a discreet moan in their editorial:

The Abbott Government’s focus on the national economy and national figures fails to consider the impacts on a small, fragile, island economy that has already been through the wringer. The negative perceptions held by consumers and investors about the Budget threaten to be the final nail in the coffin. It is imperative the Hodgman and Abbott Liberal Governments – both elected on a “jobs, jobs, jobs” platform – get proactive in Tasmania before the spiral of dwindling confidence develops into an irretrievable nosedive. A lack of confidence will not attract private investment nor will it create jobs. Tasmania is part of the Federation of Australia and should not be penalised because it is smaller and has a lower threshold to withstand funding cuts.

As that sensitive master of politics might say, oh go and live in woop woop, you parochial apple munchers and Tasmanian Tiger killers. You can't build an economy on a fox hunt ... stop whining about a fragile economy and go live on the mainland ...

And then there was the profoundly stupid Daily Telegraph front page, abusing both the disabled and diggers. How did that work out?

Complaints to press council in response to Telegraphs depiction of disability pensioners as slackers.

Having the Murdoch press on your side is a bit like being supported by a cancerous growth. Eventually it will devour the host: 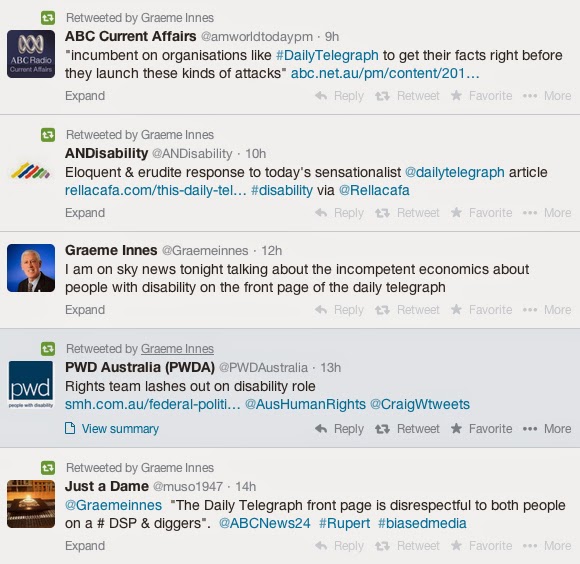 (Above: you can find Graeme Innes' Twitter feed, with links for the above, here)

Surely that helped as we rolled along towards the fatal question ...

And then there was the dirty pool of the daughter issue, being given a right old pounding by the Graudian: 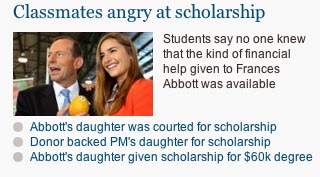 Amazingly even New Matilda got into that game with a lucky break. Someone felt so strongly about the matter that the Matildans Nouveau scored leaked documents and a scoop that left the Graudian quoting them: 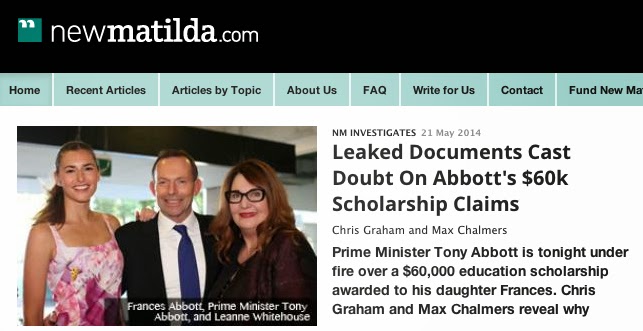 Well it would be dirty pool, except of course for the years that Tony Abbott made hay with the question of Julia Gillard's appalling taste in boyfriends in her youth.

Lordy, lordy, did Abbott set himself up for a world of pain with his boofhead, go the biff, 'trawl through any sewer you can find' approach to political life.

And so came the inevitable, fatal question:

Asked on Fairfax Radio in Melbourne whether he would survive the leadership to the next election due in 2016, Mr Abbott said: "Absolutely."
"What we saw in the last two terms of parliament was the political disaster that occurred to governments that wantonly changed their leader," he said.
"I'm happy to run a few political risks for the sake of the country." (here)

Well you know what happens when you issue a denial.

Everybody immediately focuses on the smoke, even if there's no visible fire.

And soon after that, the speculation began, led - bizarrely enough in The Australian - by Mumbling Peter Brent.

Oh they shuffled him off the whirling digital splash of doom quickly enough, but not before he had time to get this out:

If Abbott gets wobbly, and Newspoll and others start surveying for possible replacements, Malcolm Turnbull would probably top the lists again. But it is difficult to see the party going back to him.
Joe Hockey would be more likely. Snarling Scott Morrison won’t win any general public polls (regardless of how well they believe he’s doing his job), but the public doesn’t get a vote in leadership contests.
Morrison would be well-regarded in the conservative, Abbott-supporting section of the partyroom. Ideologically robust people have a tendency to project their views onto the electorate at large.
This is why I have thrown a few dollars on Morrison as PM in 2016.
Not because I believe it’s more likely than not, but that the chances are better than the 33 to 1 odds offered.
But you know I don’t encourage gambling. (and more here)

It's game on already?

The key phrase? If Abbott gets wobbly ...

If you can't get your head around policy details and instead you sow confusion and chaos, then you can't sell the policies ... you wobble around in the dark, and soon others join you, including personages like vice chancellors and doctors and other prestigious people, who don't seem to have the foggiest about what you're saying or the implications of your policies, except to say that they seem to be fukt ....

And soon enough other people notice the wobbles and the gyrations, and conclude the emperor's new clothes can't hide the reality that you're as naked as a jaybird.

Now the pond has no dog in this fight.

Some of the alternatives are profoundly dire - in fact the pond won a bet when someone offered the prediction that Scott Morrison would be the next Liberal PM, and backed it with a bottle of wine, just before the current wobbling rubber duckie floated to the surface and to power...

The trouble for the Liberal party is that they have no viable alternative. Hockey is tainted by the budget, Turnbull is tainted by his massive failure with the NBN (a cunning ploy by Abbott to render him impotent and harmless), Julie Bishop is a woman and that's more than enough, even if she was Margaret Thatcher, it would be more than enough, Christopher Pyne is a yapping poodle, and part of the education policy disaster, and so on and so forth. Scott Morrison is a barking mad speaker in tongues, but hey, he stopped the boats ...

But not having effective contenders won't stop the game being played, especially if Abbott continues to endure epic failures, winks, twitches, glitches and stitch-ups ... and soon enough, with the new senate, he's going to deal with the buffoon and the cross-benchers and the greenies and the Labor party, and he's managed to alienate many of them already ... and in selling the budget he's shown all the skills of a boofhead rugby head brawler stuck in a ruck or a maul and trying to punch his way out...

It's a joyous time to be interested in the dog eat dog world of politics.

Take this image which went around the tweet world: 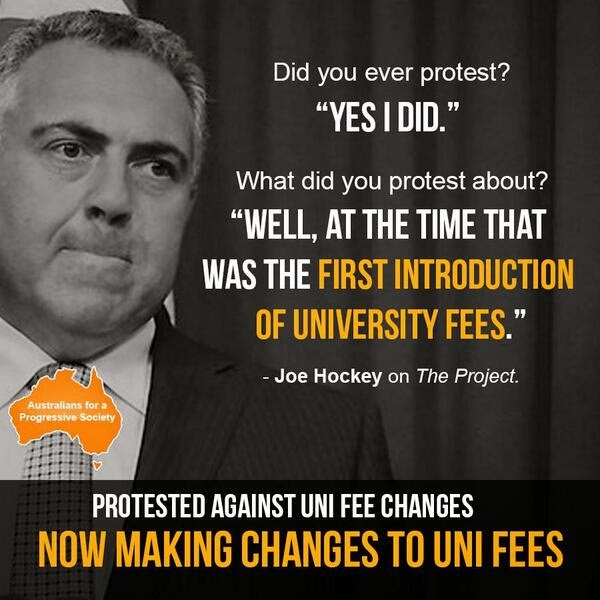 The pond couldn't believe it, especially as it came with a tag saying it had been put together by "progressives". When the pond sees the word "progressive" it's inclined to reach for the Glock.

But what do you know. Head off to jolly Joe Hockey's website, there's jolly Joe as bold as brass: 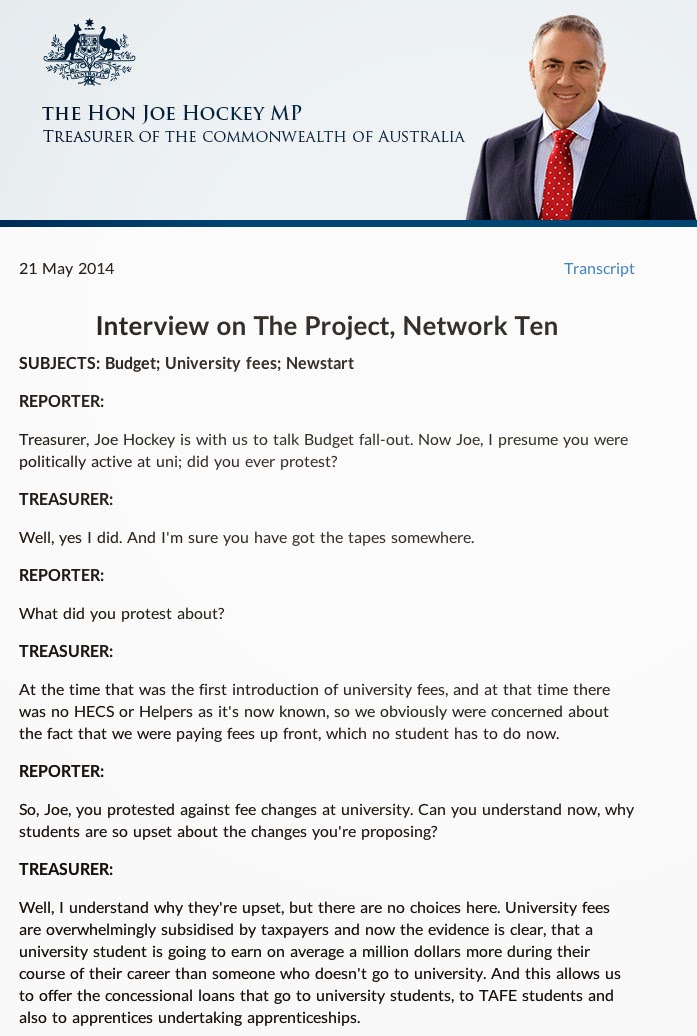 Okay, let's just print that out - you can find the original here:

REPORTER: Treasurer, Joe Hockey is with us to talk Budget fall-out. Now Joe, I presume you were politically active at uni; did you ever protest?
TREASURER: Well, yes I did. And I'm sure you have got the tapes somewhere.
REPORTER: What did you protest about?
TREASURER: At the time that was the first introduction of university fees, and at that time there was no HECS or Helpers as it's now known, so we obviously were concerned about the fact that we were paying fees up front, which no student has to do now.
REPORTER: So, Joe, you protested against fee changes at university. Can you understand now, why students are so upset about the changes you're proposing?
TREASURER: Well, I understand why they're upset, but there are no choices here. University fees are overwhelmingly subsidised by taxpayers and now the evidence is clear, that a university student is going to earn on average a million dollars more during their course of their career than someone who doesn't go to university. And this allows us to offer the concessional loans that go to university students, to TAFE students and also to apprentices undertaking apprenticeships.

The irony and the hypocrisy is astonishing and breathtaking - the fees that got jolly Joe agitated were miniscule in comparison to the debt burden - with interest - he's currently proposing for students.

And then comes the throwaway line that an arts graduate is going to make a million dollars more during the course of their career than someone doing electrical or plumbing work for the toffs of the eastern suburbs or the lower north shore.

Is it any wonder that the fatal question is now out and about, and like any decent genie, it's not going to be herded back into its bottle.

And is it any wonder that David Rowe is in the very best form of his career? More Rowe here, but the pond choked on its porridge (only the darkest of brown sugar please) when it came across this one: 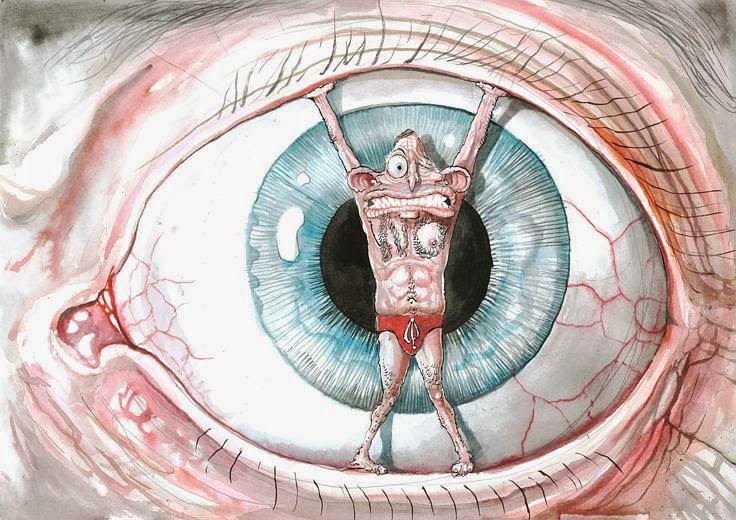